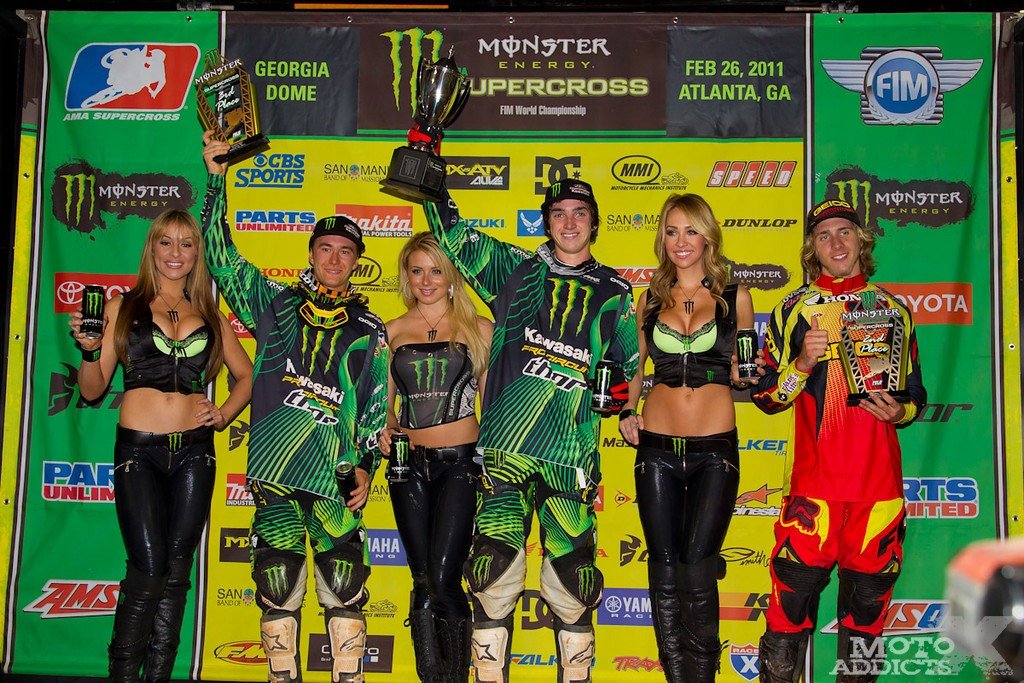 Round 2 of the East Region AMA Supercross Series has arrived in Atlanta, Georgia, carrying the expectation that the insanity that has been 2011 will keep coming. The West Region has been an incredible series with multiple winners, and from the looks of round one in Houston, the East series is likely to continue this trend.

“Bam Bam” Barcia was looking to have a repeat performance of round one in Atlanta.

In the early qualifying sessions, things would take an interesting twist when round one winner Justin Barcia would go down hard and injure his wrist. There has been little word on the seriousness of the injury, but early statements suggest it is just a sprain. Barcia would go on to qualify tenth, but that doesn’t necessarily mean much. The GEICO Powersports standout qualified eighth in round one and still easily won the Main Event. Maybe there is something in the water at the GEICO rig because Barcia’s teammate and another East favorite, Wharton, also qualified in the bottom half of the top 10, but would easily run the leaders pace in the main event.

Second place at round one was Dean Wilson. Wilson, in Houston was still nursing an off-season shoulder injury, and reports were stating that Wilson was in much better shape entering round two in Atlanta. Wilson would show his speed early, qualifying second on the day. Deano’s teammate on the Monster/PC/Kawasaki team, Blake Baggett, would also show speed early and enter the night show with the fourth fastest time.

Star Racing/Yamaha’s Ryan Sipes was the fastest qualifier all day and was hoping to turn that speed into his first ever SX win.

Top time of the day was Star/Yamaha’s Ryan Sipes.  Ryan really wants to win this year and has been incredibly fast both rounds in practice. A bad start killed his chance at a win in Houston, and he comes to Atlanta to turn that around. Other notables were Rookie Rockstar/Suzuki rider Jason Anderson who qualified third, privateer Killbarger/Honda veteran Nico Izzi with fifth and rookie Suzuki City pilot Malcolm Stewart who threw in the sixth fastest time.

Qualifying is over, the lights are out, and while the 450 riders put on a hot lap display for the capacity crowd, the Lites riders are on the line for Heat 1. With opening day jitters left behind in Houston, it was time for forty Lites riders to do what they could to move closer to being the 2011 East Region Lites AMA SX champion. Time to go racing!

Malcolm threw down the 6th fastest time in the day sessions, but is still by far the biggest mystery in the Lites East region.

Heat 1
The first holeshot of the night went to round one winner GEICO Powersports/Honda’s Justin Barcia, with Monster/ProCircuit’s Baggett and Suzuki City rider Malcolm Stewart chasing. Before they got through turn two Stewart would slip by Baggett and quickly latch onto Barcia’s rear wheel. Stewart was looking fast all night, and during the first lap, would stick a few wheels in on Barcia but could not make anything stick. During one of Malcolm’s frantic attempts to get around Barcia, a mistake was made and Baggett would slip by into second spot. Barcia, despite reports he hurt his right wrist in practice, would hold on for the win, with Baggett and Stewart riding it in for second and third

Heat 2
Heat 2 would feature Barcia’s teammate, Star Racing/Yamaha’s Ryan Sipes and JDR/KTM’s PJ Larsen. Just like in Heat 1, the GEICO/Honda would jump into the early lead with the holeshot; only this time, it was Blake Wharton. Wharton looked to be taking off, but would go down early in a corner and hand the lead to Ryan Sipes. Sipes had Larsen in tow early, but would check out and easily win Heat 2. Larsen would stay in the same spot the rest of the way behind Sipes despite early race pressure from rookie Jason Anderson. Rockstar/Suzuki’s Anderson is getting acclimated quickly to SX and rode it in for a solid third in Heat 2.

Blake Wharton would have 3 holeshots in Atlanta, which was probably one more than he wanted.

LCQ
The lites LCQ had four big names looking to race four laps for only two remaining spots in the night’s Main Event. Blake Wharton, after a heat race mistake, found himself in the LCQ with Nico Izzi , Matt Lemoine and Ryan Sipes’ teammate, Star/Yamamha Rookie Gannon Audette. Nico, though, would not line up for the LCQ for reasons unknown.

Blake Wharton grabbed the holeshot and easily rode away from the field into the Main. Behind Blake, Tyler Bright held down second spot for much of the race, but Matt Lemoine would snatch the final spot in the Main from the South Carolina privateer in the end.

Blake Baggett banked a podium—with a 3rd—in his first ever ride for the Monster/ProCircuit team in round one and looked fast enough to improve on that in Atlanta.

Main Event
The Lites Main Event rolled up to the line. With it came hungry rookies, sophomore prodigies and a few veterans, all of which feel they are the man to beat in the East Region SX series. With this many racers that feel they are the favorites to win not only races but the 2011 title, the ingredients are right for a stellar series.

When the gate fell for round two, two bright yellow helmets appeared first, flying into turn one. The GEICO Powersports duo of Barcia and Wharton were running the bright yellow domes, and Wharton from the nineteenth pick on the gate, led everyone through turn-one. His teammate—round one winner Barcia—jumped in behind him with ProCircuit’s Baggett, Star Racing’s Ryan Sipes and Baggett’s teammate Wilson all close behind. Dean Wilson got a great jump from the middle gate, but was pushed wide by Malcolm Stewart, sending him back to fifth and landing Stewart on the ground.

Dean Wilson was pushing the pace from the back of the lead pack early on.

Wharton was in the lead looking flawless and, in the process, gapping the field early on in the Main. Barcia was hanging on to second, but only by a thread as Wilson–who was the fastest man on track running fifth–was pushing the front pack together. For the next few laps, everyone from Barcia in second back to Wilson in fifth was doing everything he could to pass the man in front of him. The slick clay of Atlanta, though, had created a very one lined situation.

On lap five, Wilson made his first pass of the night, pushing Ryan Sipes back to fifth, and set off after Baggett. For the next five laps second through fifth would stay close enough to give each other back rubs, but on lap ten everything began to change. Wilson, who was running fourth, seemed to decide it was time to force the envelope. He found himself going by Baggett and, then, made an aggressive pass on Barcia by the end of the lap. Barcia, while running second, did not seem to have his normal aggression—perhaps due to his injured wrist—and was not able to come back on Wilson. He watched the number 15 ride off into the sunset, turning his attention to Baggett and holding on to third. Ryan Sipes made a mistake on lap ten losing fifth to a privateer on the One Industries/Suzuki, Hunter Hewitt. The former Rockstar Suzuki rider #65 was having a great race and obviously using Atlanta to turn heads after failing to qualify in Houston.

Wilson was now in second and taking off after Wharton, but Wharton had escaped to a nice cushion by the time Wilson had claimed second. The man they call “Slash” looked to be well on his way to career win number two—his first in well over a year—but Wharton’s bad luck was about to rear its ugly head again. While stepping off over a single into a 90-degree turn, he lost traction, came up short and found himself on the ground while Wilson, Barcia and Baggett went by. Wharton would remount and finish fourth.

After Wharton’s crash, Wilson would easily ride his Monster/ProCircuit/Kawasaki in for his first-ever Lites Supercross win—ProCircuit’s 200th—and move into a tie for the point-lead in the series. Justin Barcia, the other point-leader, would somehow keep Baggett at bay and come home in second position leaving Baggett on the third step of the podium for the second straight race. Wharton would cross the line in fourth—and take 100% responsibility for his blunder—with R.Sipes and Hewitt goin fifth and sixth respectively.

Dean Wilson would grab his 1st Main Event win and pull into a tie atop the points-standing with his nemesis, Justin Barcia.

Round two of the East Lites Region was just another extension of an already incredible series all the way around and is looking as promising as the two other SX series. In two rounds, we have had two different winners, and counting the four winners out West and four Supercross Class winners, the AMA SX series has escorted ten different players to the top of the box in only eight rounds. Could there be four or even five winners in the East Region? Absolutely! Look for Wharton, R.Sipes, Baggett and maybe even a rookie to step up and add more winner to the already remarkable tally.