Round four of the Lucas Oil Motocross Championship begins with another great battle between the Monster Energy/Pro Circuit/Kawasaki teammates for the Championship points-lead. The red plate has been passed back and forth between the Pro Circuit teammates for the first three rounds, and this week, the number twenty-eight of Tyla Rattray would be the man with the honor. With only a two-point advantage over Dean Wilson and eleven points over Blake Baggett, could Tyla hang on to the Championship points-lead for more than a week, or would one of his teammates wrestle the red plate back from the South African? We would have the answer after two 30 minute +2 lap motos on the brutal Budds Creek circuit. 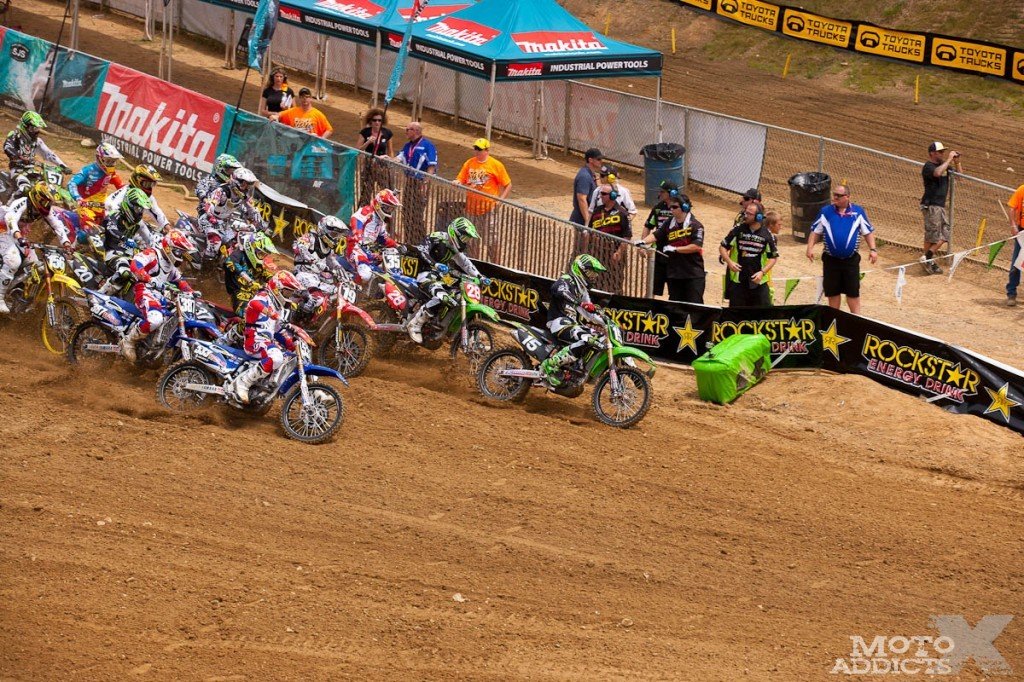 In Moto 1, the Mitch Payton squad would do what they’ve done all year long. Up and around turn one, it was a sea of green at the front of the pack. Dean Wilson was the man leading the 250s, with Rattray in tow. Behind the Pro Circuit teammates were a pair of DNA/Shred Stix/Star Racing/Yamaha’s Gareth “Swanny” Swanepoel and Kyle Cunningham, as well as Eleven-10 Mods Darry Durham and the number twenty of Broc Tickle. Tickle, with his first good start of 2011, would quickly join his teammates at the front, and at the end of lap one, it was a Pro Circuit sweep with Wilson, Rattray and Tickle checking in 1-2-3 at the stripe.

For the next thirty minutes, Rattray would stay a close distance to his Championship rival Wilson, but was never able to break the number fifteen. Wilson road a perfect thirty-five minute race at the front and was able to score the Moto 1 victory. Rattray would cross the line a close second, just four seconds behind. Broc Tickle would have his best moto of the year and grab his first podium in a moto for the 2011 season back in third. For the third time in the seven motos run in 2011, the Monster Energy/Pro Circuit/Kawasaki team would sweep the podium. 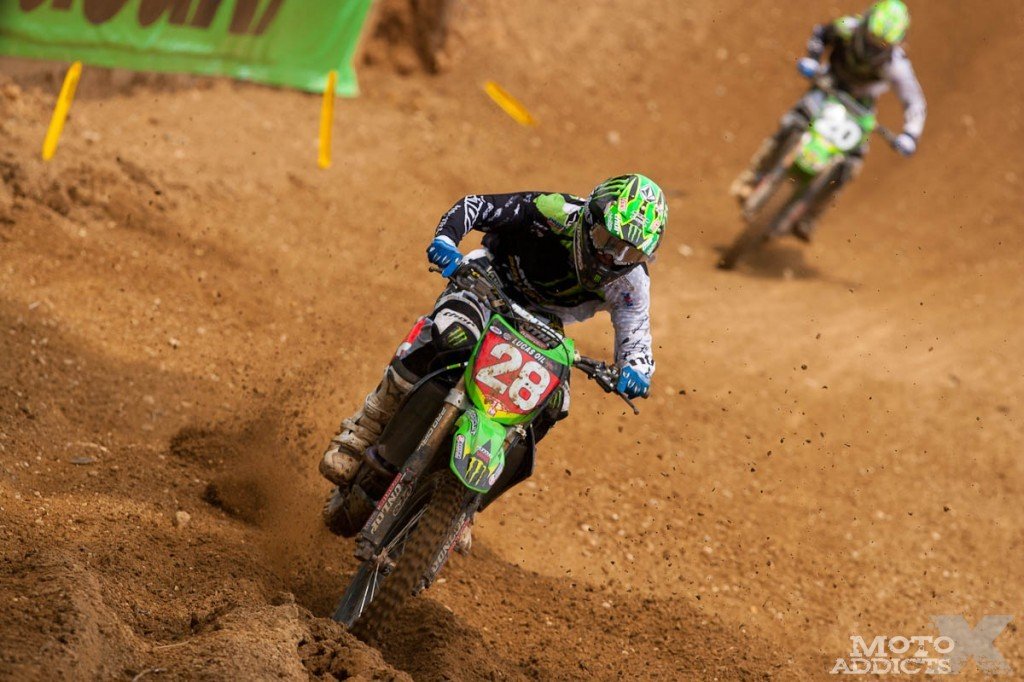 Behind the PC squad in fourth was Kyle Cunningham. Kyle has been one of the pleasant surprises in 2011 and would grab his second fourth-place finish on the year. Behind Kyle, a pair of GEICO/Powersport Honda’s crossed the line in fifth and sixth. Eli Tomac and Justin Barcia were two of the pre-season favorites, but have struggled with starts and the depth of the field. In Moto 1 at Budds Creek, Tomac would only move up one spot after starting in sixth, and Barcia would only move up three positions after starting in ninth. Another Honda in the hunt in Moto 1 was Darryn Durham’s Eleven-10 Mods Honda. Darryn has been showing his worth all season long, and once again, he would battle near the front of the pack. Unfortunately, Darryn’s front brake caliper would snap off and send him flying over the bars in an incredibly hard, high speed get-off. Darryn was okay, but would not be able to finish Moto 1. 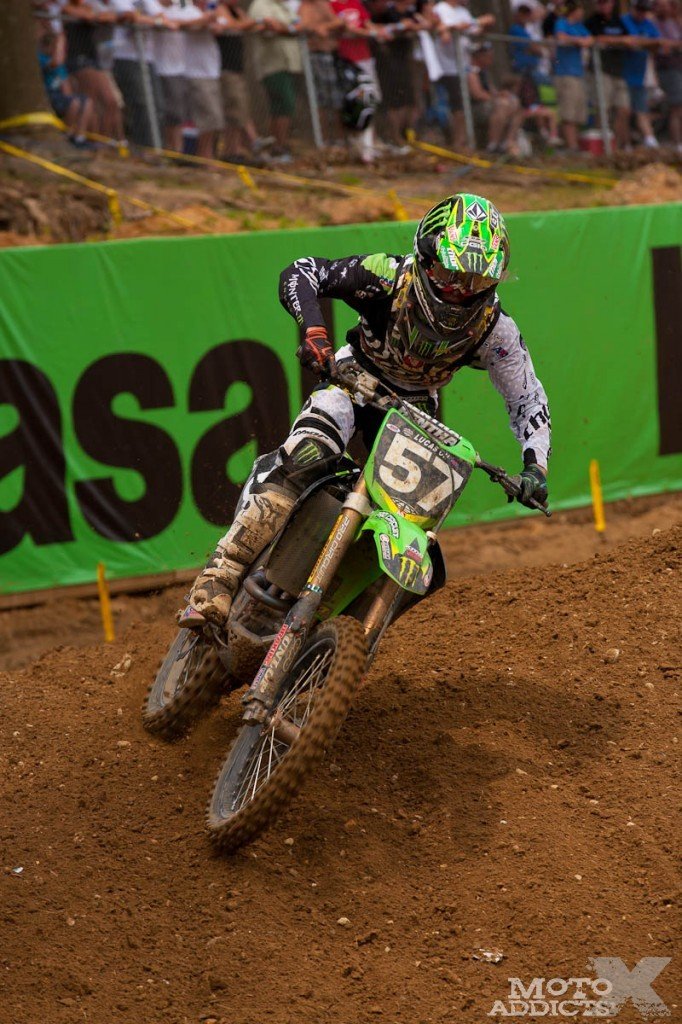 With Wilson edging out his teammate Rattray for the Moto 1 win, he had taken over the points-lead by one point. Rattray would quickly answer back with the holeshot in Moto 2. Behind Rattray, another Star Racing machine, Gannon Audette, would round turn one in second behind Rattray with Baggett, Swanny, and Barcia all right there. The first moto winner, Wilson, was buried in the pack somewhere just outside the top ten and would check in after lap one in ninth.

The Hangtown and High Point winner Baggett had a rough go of it in Moto 1 with a seventh, and after a great start in Moto 2, would once again make a costly mistake. While trying to move around Audette for second place, Blake would hit a breaking bump and be sent flying over the bars in spectacular fashion. Blake would remount in dead-last, make his way back up to seventh again and finish the day with a disappointing 7-7 score for seventh overall on the day. He would start the day eleven points behind in the Championship and finish the day with a massive 30-point mountain to climb.

Up front, though, Rattray had found company. Justin “Bam Bam” Barcia had made his way around Audette and was latched on to Rattray’s rear wheel. It was reported early in the day that Barcia almost didn’t line up due to being diagnosed with Mono, but would show very little ill-effect from the sickness. He would stay on Rattray’s rear tire for twenty-five of the thirty-five minute moto, but in the end, Rattray was just too much for the aggressive Barcia. Rattray would stretch his lead over Barcia late in the race and win Moto 2 by an 8.5 second gap, winning the overall in the process and retaining the red plate for another week. Barcia would hold on for a second place in Moto 2 and, with a 6-3 score, land on the podium for the first time in 2011, this time in third.

Behind Rattray and Barcia, Wilson had fought his way back from his bad start to get third. Wilson has been struggling with coming through the pack in 2011, but looks to be getting that worked out. With his 1-3 score on the day, the Scottsman Wilson would finish second overall and only lose two points in the Championship to South African Rattray. The two are separated by four points heading to Lakewood, Colorado. Coming over the stripe in fourth was Gareth Swanepoel followed by Eli Tomac in fifth. 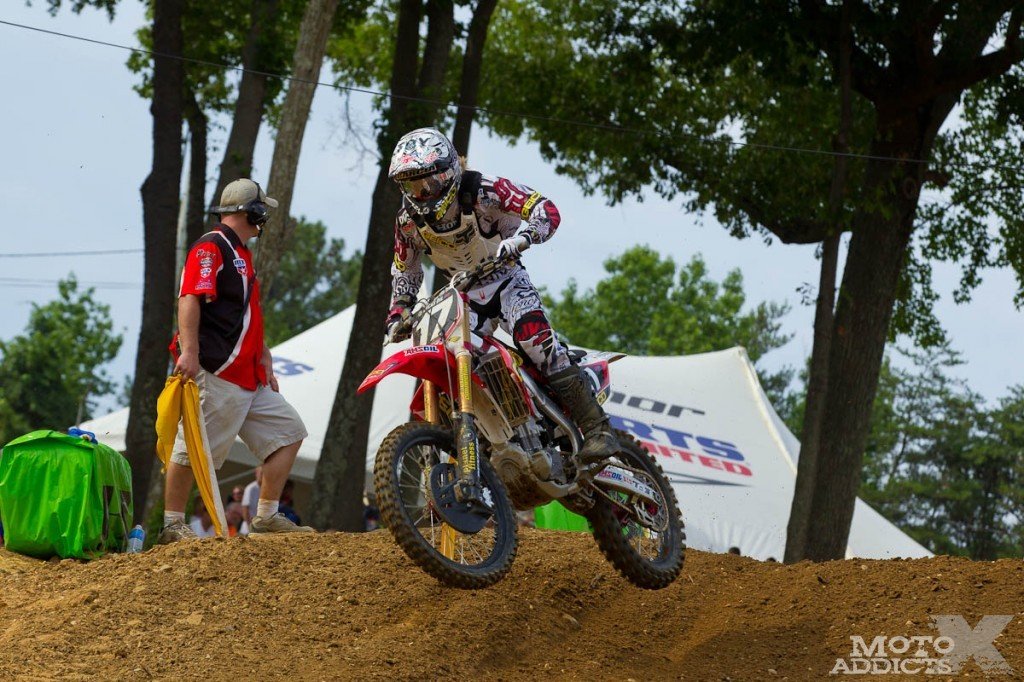 For the fourth consecutive race, the Monster Energy/Pro Circuit/Kawasaki squad would show their dominance in occupying the top two spots of the podium at Budds Creek, and Rattray and Wilson would stretch their lead in the points on the field. Baggett sits third in the points and looks, at times, to be the fastest man in the class, but if he continues his trend of putting in a really good race followed by a really bad one, he will have no chance in the Championship. As far as everyone else in the class, they have been far too inconsistent to battle in the points. Rattray and Wilson have been the class of the field, and as of right now, they’re making it look like a two-horse race. 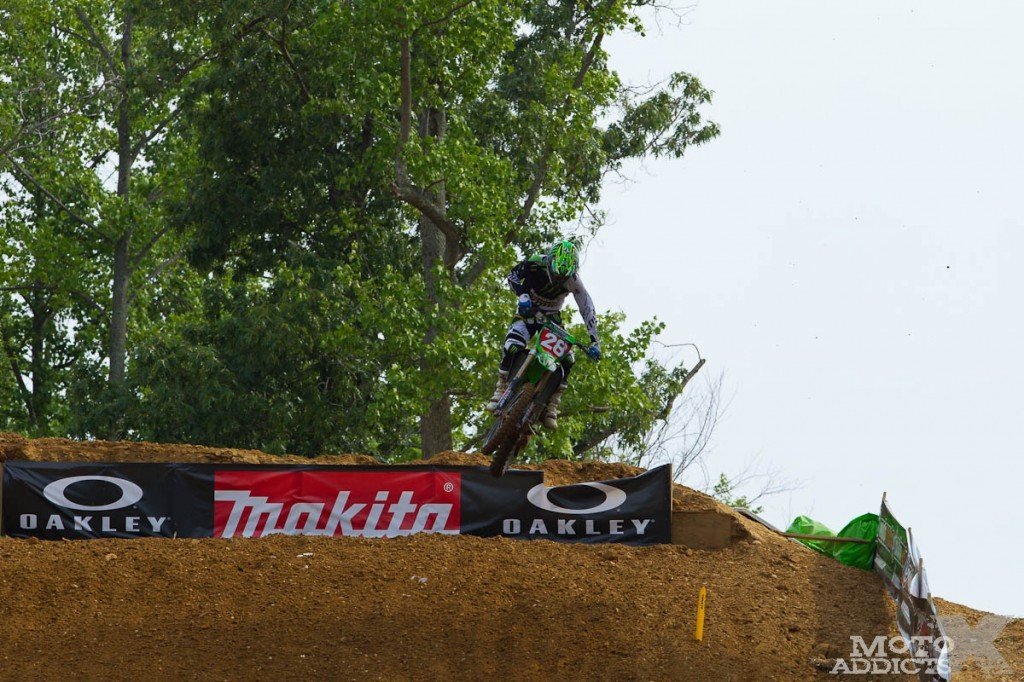 Next stop will be round five at Thunder Valley in Lakewood, Colorado. 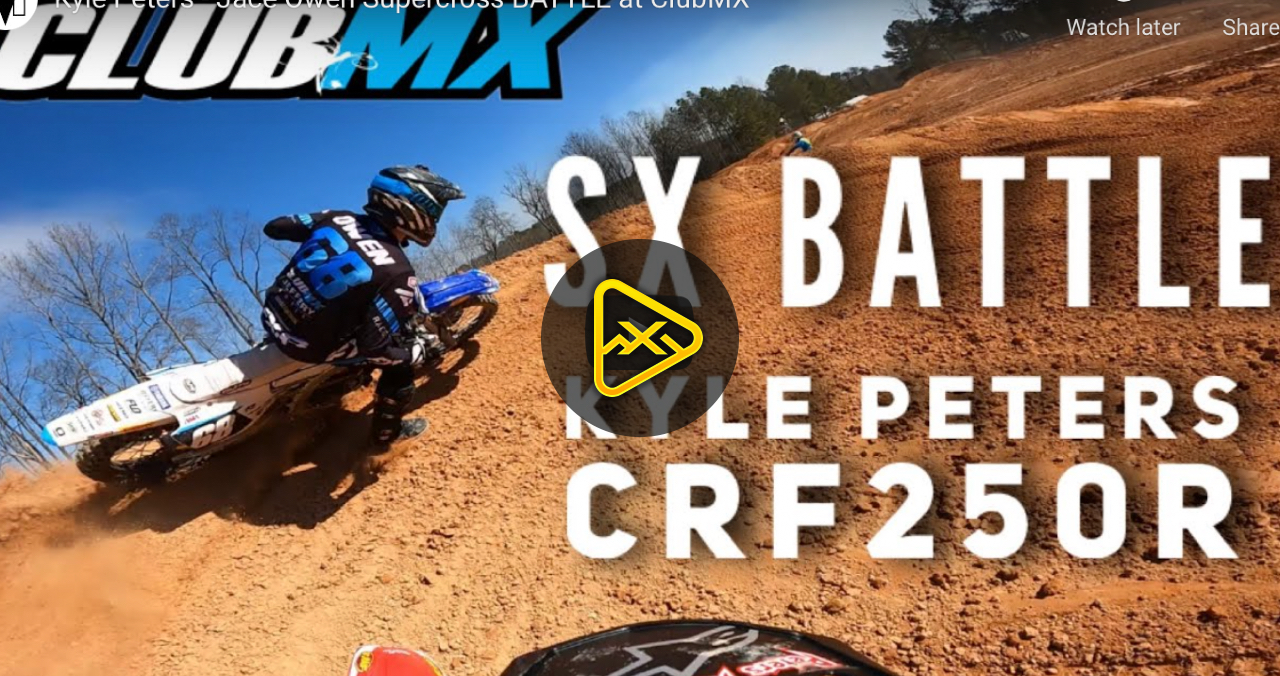 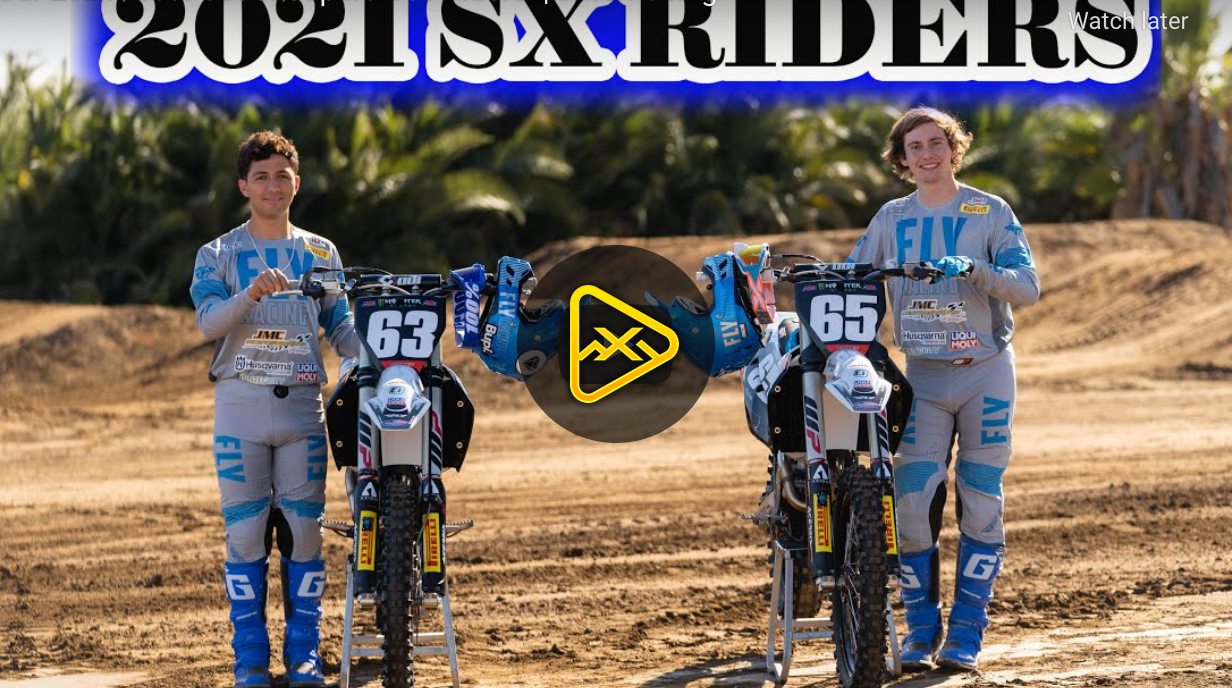 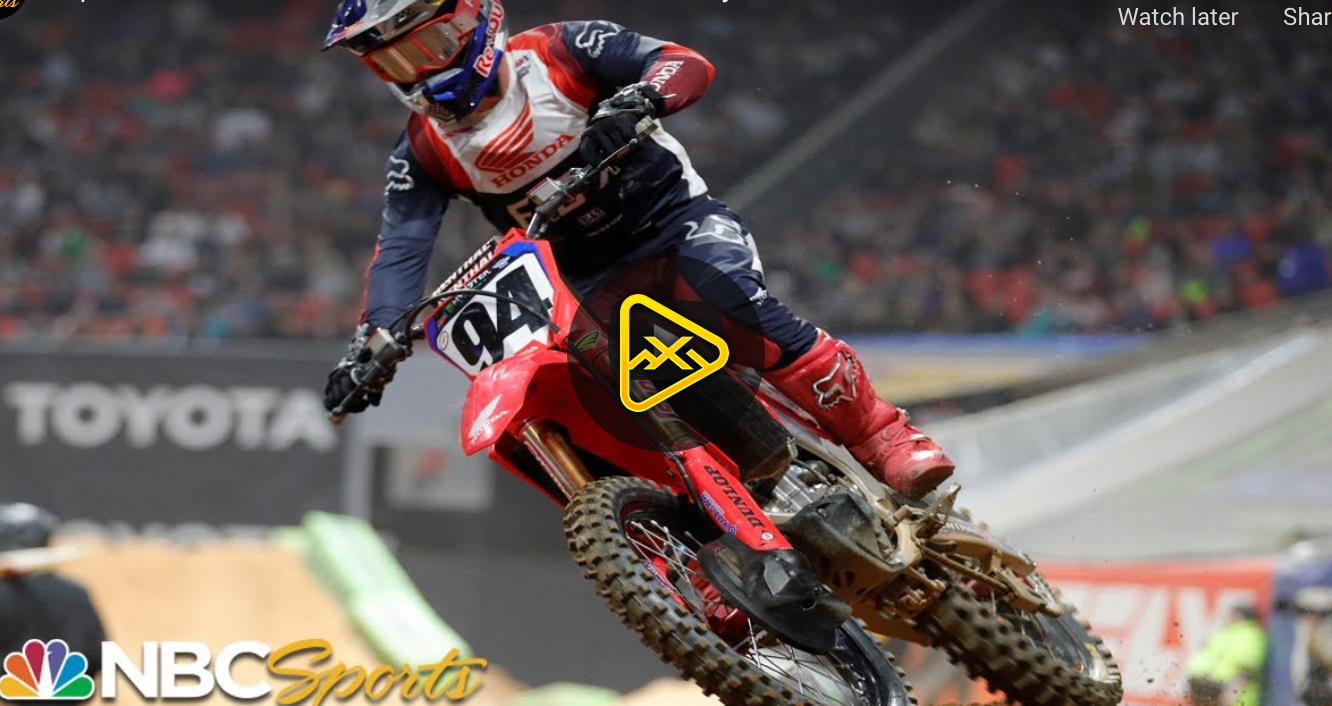