This week, MotoXAddicts made a phone call north of the border to talk with the Canadian Motocross MX2 Champion, Tyler Medaglia. After securing a ride with the dominant Canadian powerhouse Blackfoot Yamaha back in 2010, Tyler went on to secure his first-ever Canadian Motocross Championship in the Mx2 class. Now in his first title defense, Tyler comes into 2011 with a whole new crop of youngsters–including a new batch of Americans–trying to take what he considers his. Tyler has shown, though, that if they want his number one plate, they’re going to have to fight him for it and has started 2011 off with three-straight overall wins. After his win this last weekend in Calgary, we gave Tyler a call and this is how the conversation went with the defending champ.

I guess, I’ll start with a really dumb question since you’re undefeated in the first three: how’s 2011 going for you up in Canada?

(Laughs) Well, it’s been going really good, actually. I had a really good winter down in Georgia training at GTF [Georgia Training Facility]. I stayed home a little bit this year because the team I ride for took a bit longer to get their bikes this year. So, I stayed home and played Hockey and did some winter sports stuff that I usually have to miss. So when I got down South, I started training a little bit later than usual. Other than that, it took me a few weeks to get going. Then I came home, did all my testing and then got ready for the first National, and it’s going pretty good so far.

Yeah, probably a little bit, just because it’s my second year with Blackfoot. I felt a little bit more pressure the first year because it’s the premier team in Canada, and they expect a lot out of their riders. This year, though, coming into the first round, I knew what my bike was like; I knew my fitness was good; I was comfortable with the team; I have the same mechanic as last year, so it was easier to come in with more confidence. 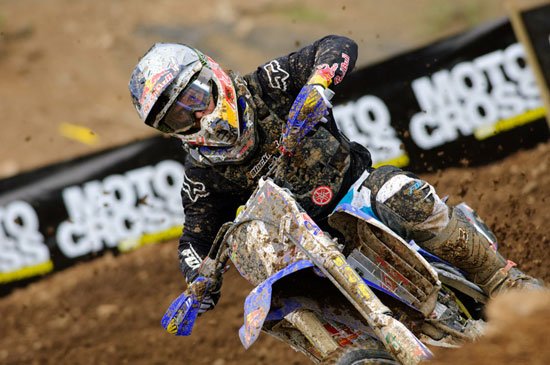 Blackfoot is about as good as it gets. They’re full factory backing, aren’t they?

Yeah, the bikes are good. We got all our in-house stuff and Yamaha. We have some Italian parts on them. We have Joe Skidd doing suspension, and he’s one of best suspension guys there is, I think. He worked with Valentino Rossi, and he worked with Ohlins during the development periods. He really knows his stuff, and he’s contracted only to do our team. I think he has been for a long time for Blackfoot. Our bikes are top-notch, really good for sure.

Yeah, I would imagine the Blackfoot rig would look similar to the Pro Circuit rig down here as far as #1 plates in decoration–a lot of Canadian domination.

So, this week in Calgary was a little on the muddy side. How did you like playing in the mud?

It wasn’t as bad as I thought it would be. They did what they could with the track. It didn’t need to be muddy at all. Practice was the sloppiest. First moto wasn’t really muddy at all. It just had really, really long and deep ruts. It played out in my benefit just because I’m from the East Coast. I’m used to soft terrain, and I practice in ruts a lot. I ended up winning by thirty-some seconds in the first moto. Then it started to dry out, and for the second moto, it was actually unbelievable. I thought the track was perfect. Everything was fun and safe and every corner had four really long deep ruts so it really separated people. It was tacky, and I had fun. 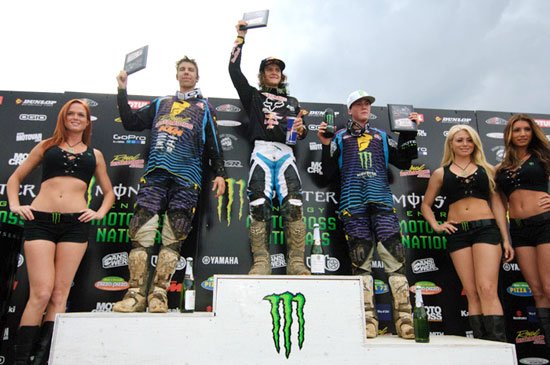 Yeah, I didn’t get to race when I was 16 and 17 because I broke my back when I was 16, and I had surgery in 2004. Once I got rehab with that done, the next winter I was training, and I shattered my humorous in my arm, and that took me out for that year. So I missed two pretty crucial years in my career. Then, I did Lites stuff the first two years after coming back and got better. Our Nationals were split East Coast and West Coast, and I got my first ride in 2007–the third year after my last injury. I raced the 250’s, and they let me race the 450’s on the West Coast. I did really good at Calgary, actually. I was running in the top three and had a podium position going when my chain broke. The team kind of saw that as an opportunity and bumped me up to 450’s really early. So I really didn’t get a shot at doing to much Lites stuff. The next year, I raced full-time and was in the Championship hunt in the 450 class. I was leading the series for most of the year and had one crash near the end and ended up getting third overall in the series.

You had a heck of a year that year from what I understand. You won the MX1 Class at Gopher Dunes, right?

Yeah, I won Gopher Dunes, I won the Montreal SX and qualified first in both classes. Then in 2009, I raced 450’s again. I got hurt coming in; I had some problems with my shoulder. I just wasn’t as prepared. I eventually ended up doing better, and Blackfoot picked me up for 2010.

I’m wondering if you plan on making a future run at trying to race again down here in the States, or do you plan on just staying up north?

Well, yeah, obviously that’s the light at the end of the tunnel. I want to give it another shot in the States. I know I have the work ethic, and I have no distractions. I got my house, I’m not a partier, and I really think I have the focus and the determination to do well in the States. I just gotta get the right opportunity. It takes a whole lot, and you gotta have the right support. I think this year–hopefully–Colton [Facciotti], me and the team are going to come down–bring the rig, the mechanics and the whole deal, so we’re 100% comfortable–and race Southwick and Steel City. We’ll see how that goes. 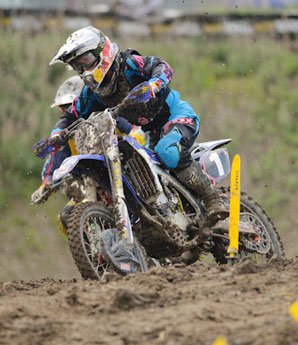 Well, some people don’t realize how fast you guys really are up there on the home soil. I mean, you guys fly on your home tracks. I almost think sometimes it doesn’t matter who comes up to Canada, they’d have a hard time beating you guys on your home turf. It’s kind of a big brother syndrome type thing, though. I mean, you put a top U.S. guy up there and don’t tell anyone it’s him, and it wouldn’t be as easy for him as some may think. Does that make sense?

Yeah, everyone is comfortable in their own environment. There have been lots of guys that come up and struggle a little. Matt Goerke is up here now, and he’s finding out how it is and is struggling a little bit. Obviously, he’s just coming back from an injury and stuff, but Nick Wey came up too. Lots of guys have come up and tried it, especially some of the kids that come up in the Lites class and come in a little bit cocky thinking they’re going to clean up and really get a rude awakening. But yeah, everybody is comfortable in their own environment. It’s the same as going down South. It’s tough going down in just a truck and stuff. This year, though, if we’re going to want to make a splash, we’re going to go down in full race trim, try to take it as just another race weekend and try to do good.

So, what’s your take on the new crop of Americans you have up there this year–like Politelli, Sjoberg and Topher Ingalls?

It’s good. I haven’t talked to those guys much. I haven’t talked too much to Tyler Sjoberg, but Austin Politelli, kid seems nice, and they’re all riding good. Topher I don’t really know. They’re all doing okay, and obviously they don’t know the tracks well yet, but I think they expected it to be a bit easier than it is. I was talking to Teddy Maier, and they seemed pretty confident at the first round before they even knew what was going on. There are three of us–me, my brother and Kevin Benoit–that really know how to pin it.

It’s your world up there man. (Laughs)

Yeah, but it’s good. It’s good that they’re coming up and racing. The racing is just going to get better, and they’re all going to have a good time. I think there’s a lot less pressure here than racing in the States. I think it’s a lot more friendly atmosphere.

Canada just has friendlier people. (Laughs) Nobody talks much to anybody in the pits down here. It’s all business. 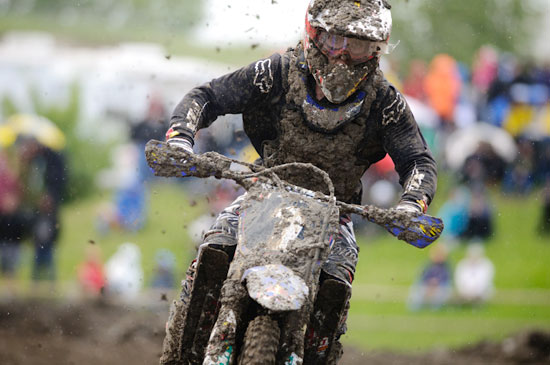 (Laughs) I’m not thinking that far ahead yet. I’m just taking it one race at a time. Obviously, that would be good, but I just want to stay healthy and continue to ride good and strong. My fitness is really good, and I don’t tired near the end of motos so I just want to keep the ball rolling. I want to have some fun.

I didn’t mean to put you on the spot. (Laughs) That’s all I have for you, though. Anyone you want to thank for helping you get to the races every week?

Yeah, obviously the whole team at Blackfoot Yamaha, Red Bull, Fox, my mechanic Troy and all my family, my supporters and everybody that helps me out and has got me to where I am.

Nice! I do have one question I wanted to ask and totally forgot to ask. I was curious what it’s like going heads up with your own brother. Does it get heated? I mean, you guys are battling at the front.

It’s good, just because he knows exactly how I ride and we can kind of trust each other. But it’s a battle. He’s got a little bit of a different personality than me, so he’s a little bit of a firecracker. At the second round, we got into a little bit of a heated battle in practice. That was kind of funny. It’s good though ’cause I can trust him, and if I don’t win and he does, I don’t don’t mind that. If someone is going to beat me, I don’t mind if it’s him.

I just started actually because Colton just asked me, “Hey, what were you tweeting last week?” And I’m like, “I don’t have Twitter.” And he says, “No, I’m sure you do.” And he goes on, and someone had started a Twitter account under my name and had been tweeting all this shit for weeks under my name, and it wasn’t even me–answering my friends and just creepy crap. So, I literally just started an account. 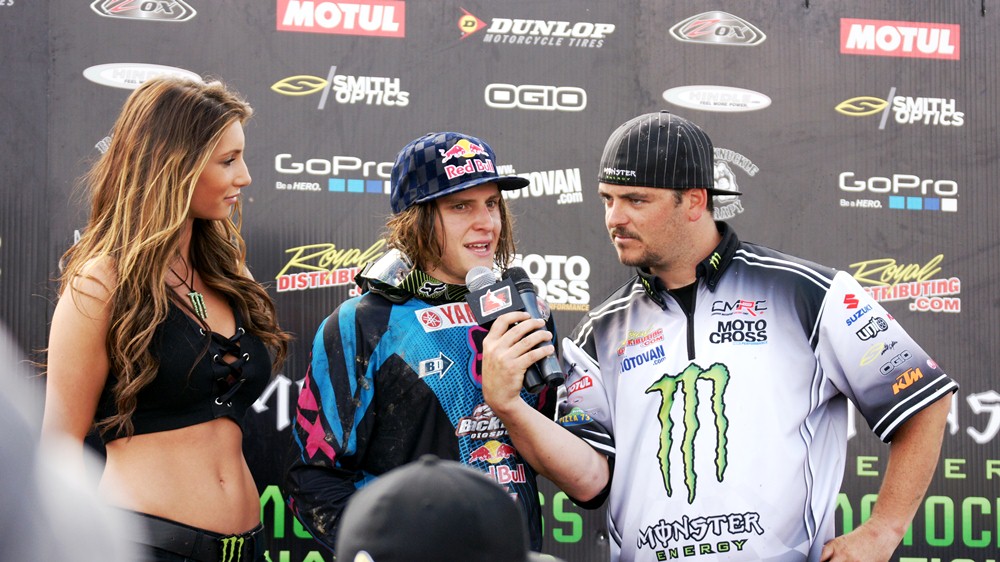 That’s awesome! That’s when you know you’ve made it. When you have people pretending to be you, it means you’re kind of a big deal. (Laughs)

What’s your real one so I can send you this interview when its live and so people know where they can find the real Tyler Medaglia?

Okay, man, thanks again, and good luck the rest of the year!

No problem. Thanks for doing this. 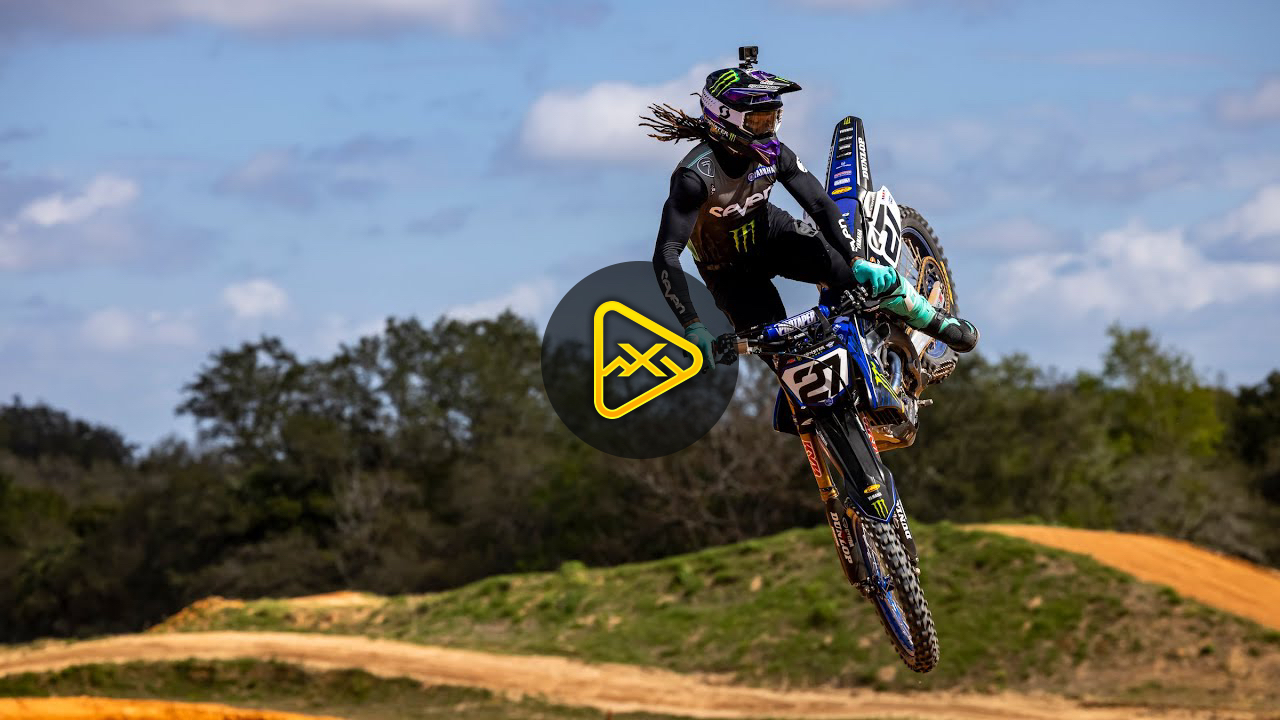 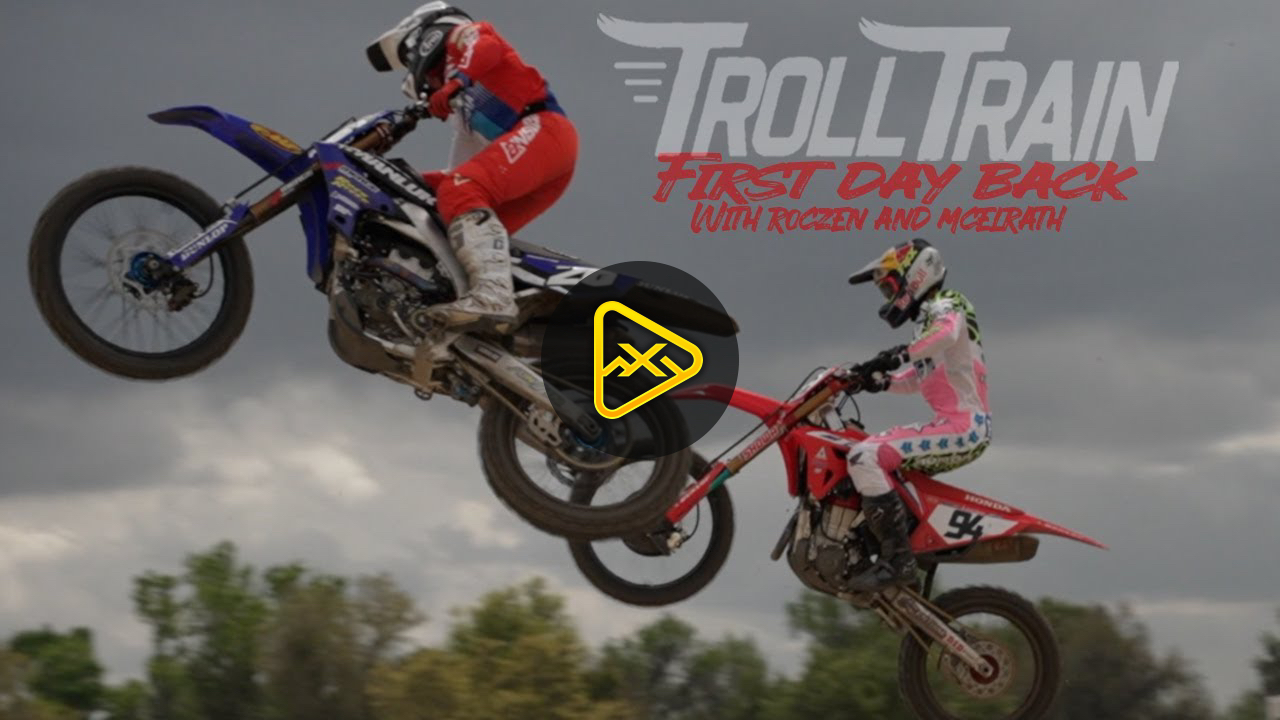 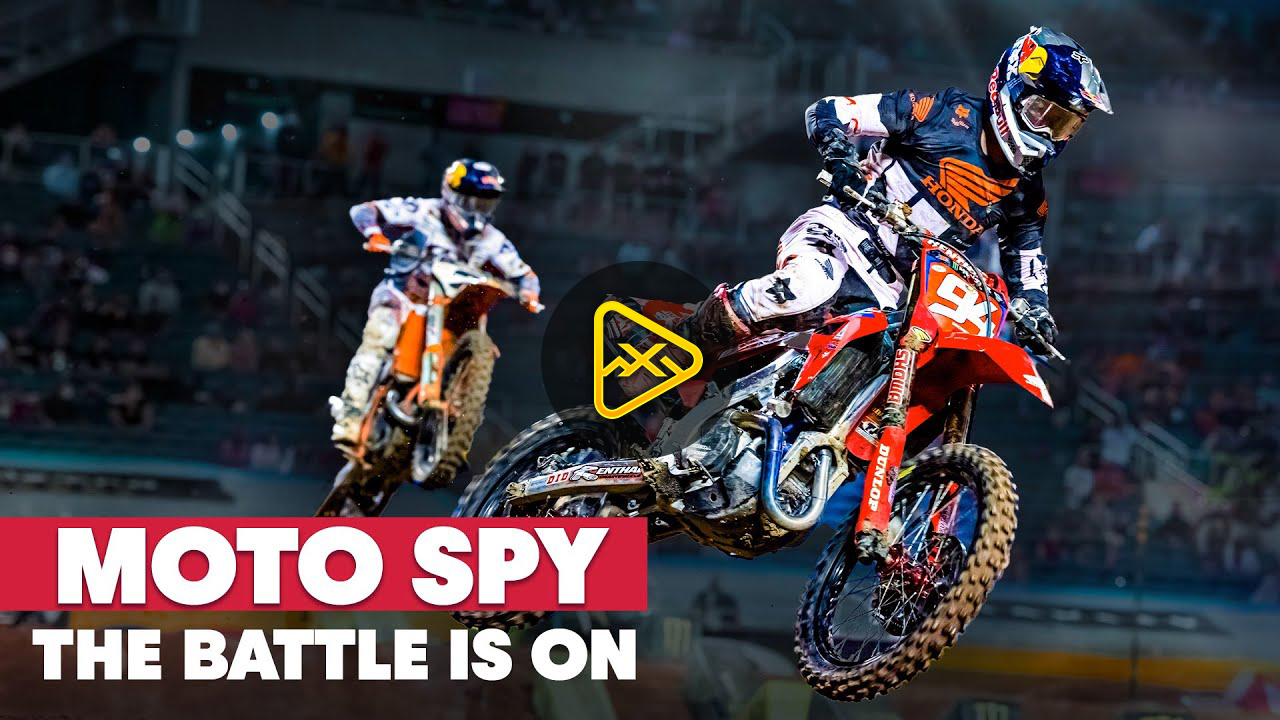