MORGANTOWN, W.Va. – The Lucas Oil AMA Pro Motocross Championship’s return to action from Unadilla Valley Sports Center in New Berlin, N.Y., last weekend, resulted in exceptional competition from the world’s best motocross athletes. After a pair of grueling motos in both the 450 and 250 classes, on one of the most challenging tracks in the world, DNA Shred Stix/Star Racing Yamaha’s Gareth Swanepoel showcased tremendous resolve to claim this week’s Ricky Carmichael Hard Charger Award.

After a stellar opening moto in the 250 Class, in which he battled at the front of the field to finish fourth, Swanepoel encountered misfortune in his search for a spot on the overall podium. Following the chaotic opening lap of competition in the final moto, in which riders fight tooth-and-nail for a good start, Swanepoel crossed the line in 37th, after encountering trouble. For the remainder of the near 35-minute moto, the South African battled his peers, fighting for his chance to post a season-best effort. 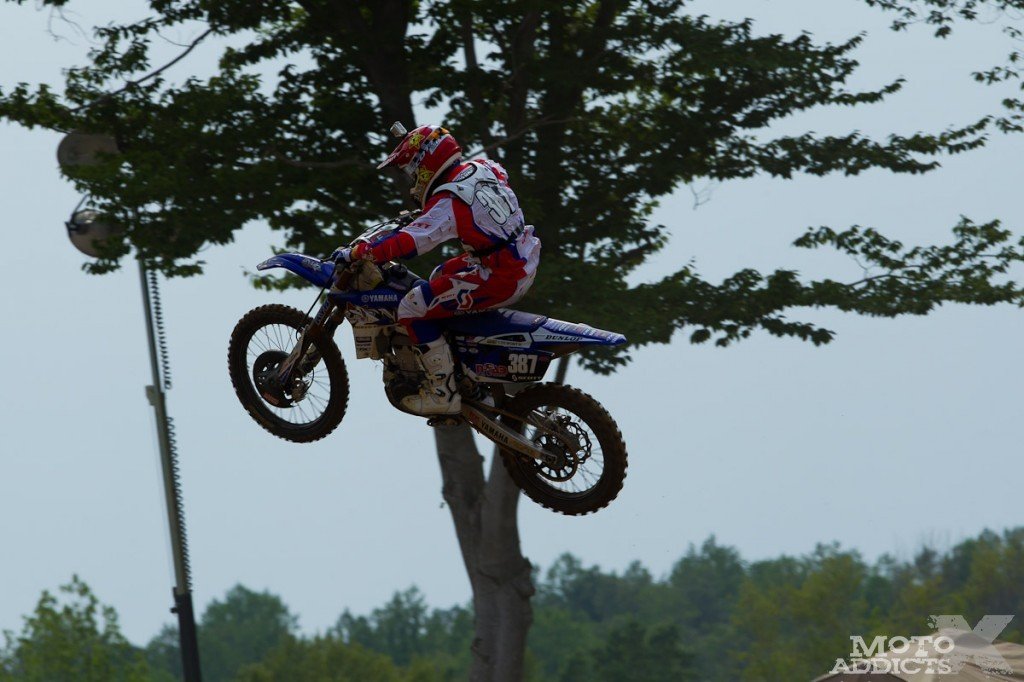 Gareth Swanepoel battles from behind to come back and win the "RC Hard Charger Award" at Unadilla. Photo by Brian Robinette

While Monster Energy/Pro Circuit/Kawasaki’s Dean Wilson grabbed the checkered flag at the conclusion of 17 laps, Swanepoel’s resilient ride landed him 16th, surpassing an impressive 21 riders during the moto. As a result of his committed effort, Swanepoel finished eighth overall, thanks to 4-16 moto scores.

For his dedication at Unadilla, Swanepoel will be presented with the Ricky Carmichael Hard Charger Award at next Saturday’s pre-race riders’ meeting, prior to the Rockstar EnergySouthwick National from Southwick, Mass. The announcement will provide well-deserved recognition for his efforts in front of his peers.

Another athlete that emulated the trademark relentless pursuit of achievement regularly displayed by the award’s namesake was Red Bull KTM’s Mike Alessi. While Alessi had a solid day atUnadilla, posting 7-4 moto scores en route to fifth overall, he overcame adversity at the championship’s previous stop from Washougal Motocross Park. At the series’ eighth round of the summer, Alessi surpassed 21 riders in the opening 450 Class moto to climb from 30th to ninth, helping him finish sixth overall. The amount of competitor’s Alessi passed was the same amount as Monster Energy Kawasaki’s Jake Weimer, who was given the award. In recognition of his great ride, Alessi will be presented with his own RC Hard Charger Award at Southwick, alongside Swanepoel, next weekend.

For media information about the Lucas Oil AMA Pro Motocross Championship, please contact Media Manager Brandon Short via email at [email protected] or by phone at 949-365-5750.

Alli, the Alliance of Action Sports
Alli, the Alliance of Action Sports, is a global business that encompasses national and international action sports tours and events, multimedia production, and a consumer facing lifestyle brand. The Alliance includes: the Lucas Oil AMA Pro Motocross Championship, the Dew Tour, Winter Dew Tour, China Invitational, King of Wake series, and the Gatorade Free Flow Tour. Alli TV Productions creates original content, produces and presents content with partners, and distributes Alli content through a variety of channels. Alli is owned by NBC Sports and MTV Networks and represents a network of athletes, fans, brands and properties. Its mission is to facilitate the momentous growth of action sports, through competition and lifestyle, for a new generation of fans and athletes. The Alli properties are home to more than 550,000 spectators each year and broadcasts more than 150 hours of original content in 100 countries and 280 million homes worldwide. Visit www.allisports.com.

Lucas Oil Products
Lucas Oil is a worldwide leader in the production of oils, lubricants and additives. Based in Corona, Calif., Lucas Oil Products is one of the fastest-growing additive lines in the consumer automotive industry, featuring a premium line of oils, lubricants and problem-solving performance additives. Through innovative product research and development, along with aggressive marketing programs, Lucas Oil Products has established itself as the top-selling additive line in the American truck-stop industry. Lucas Oil is involved in an array of motorsports sponsorships, including the “Official Motor Oil of the AMA Pro Motocross Championship.” Visitwww.LucasOil.com.