The Monster Energy AMA Supercross, an FIM World Championship, went south down to San Diego, California’s Qualcomm Stadium for round number six of the Western Regional Supercross Lites Championship and the San Diego Supercross. After the first five rounds of the series, GEICO Powersports/Honda’s Eli Tomac had built up a huge twenty-point lead in the Champoionship, but in the world of Supercross, anything can happen and probably will. Now with a win from Monster Energy/Pro Circuit/Kawasaki’s Dean Wilson and a DNF by Tomac, we have a new points leader. Just like that, Wilson went from wondering how the heck he was going to get back into the Championship to a two-point lead with the Lites West series heading into a nine week break.

In the Main Event, it was all Mr. Wilson. Deano was very vocal coming into San Diego about changing up his strategy from trying to win races to just having fun. Well, if holeshotting, walking away from the field, winning your second Main Event of 2012 and making up twenty-four points in the Championship to take the lead is not fun, we don’t know what is. Mission accomplished, Dean. There is no way Dean could have ever thought his change up would work quite as well as it did, but he now has eight weeks to get ready for the final three races in a Championship where he has a two-point lead over Eli Tomac.

Behind Wilson early in the race was JDR/JStars/KTM’s Matt Moss, Troy Lee Designs/Lucas Oil/Honda’s Cole Seely and a charging Eli Tomac.  The Australian Matt Moss has been climbing the ladder towards the podium each week, but while he was fast, he did not quite have the speed to hold back the two charging Hondas. Both Seely and Tomac would go around Moss and set off to try and reel in Wilson, but only one of them would finish the race. Eli, while trying to get up to Seely, went into the whoops on lap eight and never came out. The number seventeen went down hard, and his night and his lead in the Championship came to an abrupt end. While Eli rode back to the truck calculating his two-point deficit to Wilson, Seely grabbed the second spot on the podium, and Matt Moss scored a third for the first-ever podium of his career and for the JDR squad.  Congratulations to Matt and Team JDR/JStar/KTM on a breakthrough night. 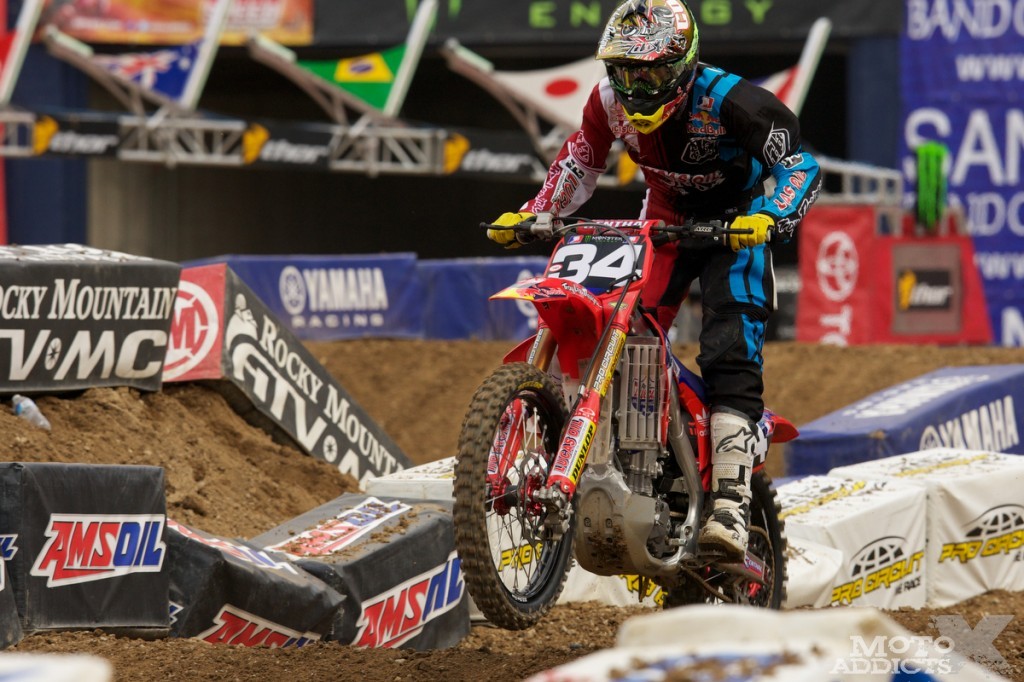 Cole Seely has come back alive over the last two rounds with back to back second place finishes. Photo: Chad De Rosa

Finishing in fourth and fifth were the Star/Valli/Yamaha teammates Gareth Swanepoel and Nico Izzi with Swanny’s finish being the surprise of the night. Swanepoel is still trying to get the hang of Supercross, and after missing two of the first three Main Events, has now scored a fifteenth, fifteenth and fourth in the last three. Learning Supercross can be a painful endeavor, but the South African has taken his time and, now with the confidence from San Diego, may be able to take it to a new level.

Among the top six there were three that finished with their best ever Main Event scores. The third was the rookie GEICO Powersports/Honda fill-in rider Gavin Faith. Since getting the call from the team to fill in before round three at Dodger Stadium, Gavin has made all four Main Events, but before San Diego, his best finish was a fourteenth. Now that the series heads east to Dallas to start the Lites East Regional series, Gavin has eight weeks to get everything he needs dialed in before Seattle. With real testing time under this rookie’s belt, we think he can begin to fight inside the top five.

With the first six rounds of the West Regional Lites series now in the books it is time to go east and let a whole new gate full of talent display their skills starting next weekend in Dallas, Texas. With the Lites West not reconvening until April 21st in Seattle, Washington, there is plenty that can happen to change the scope of this Championship. Right now, the top three riders are within sixteen points of each other, and all three will be fighting in the final three rounds for their first-ever Supercross Championship. 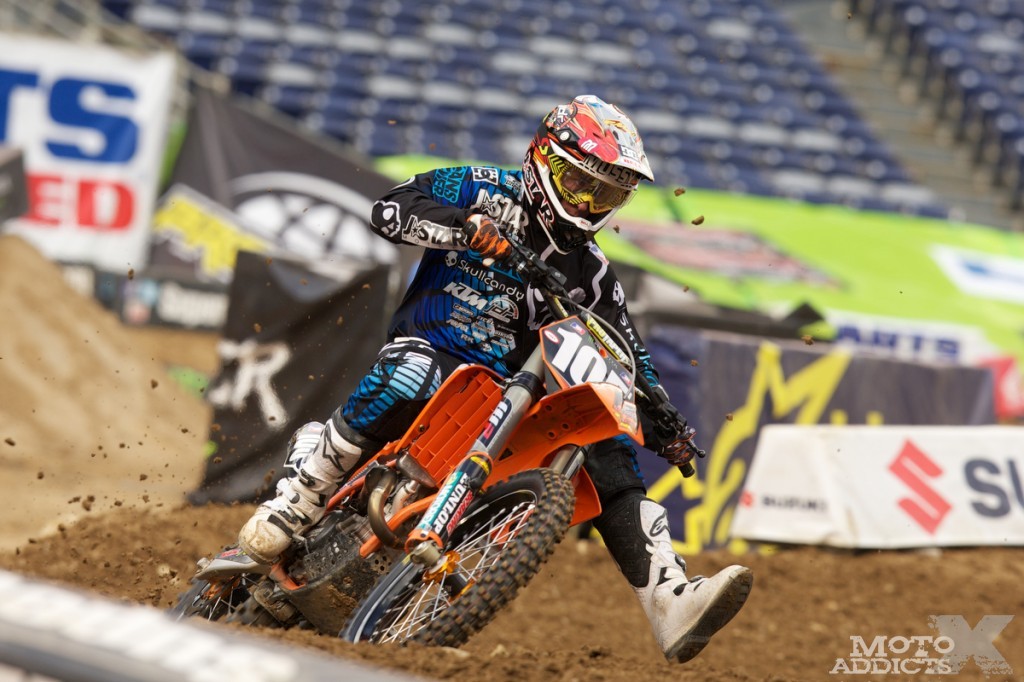 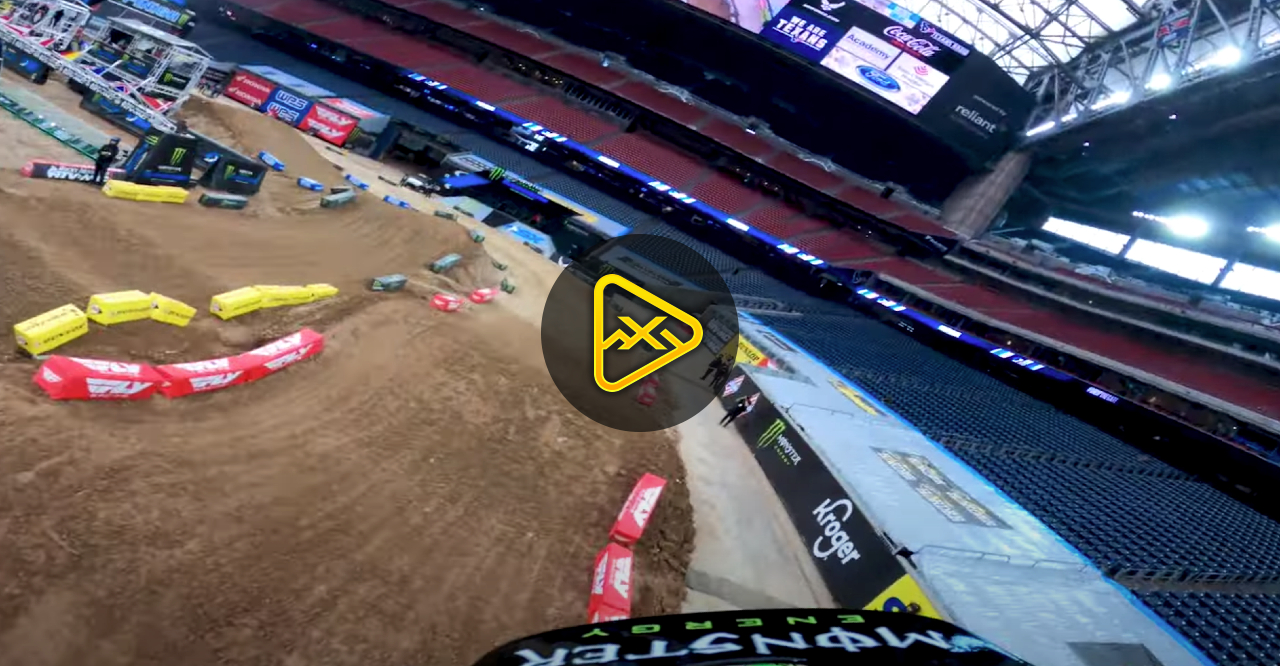