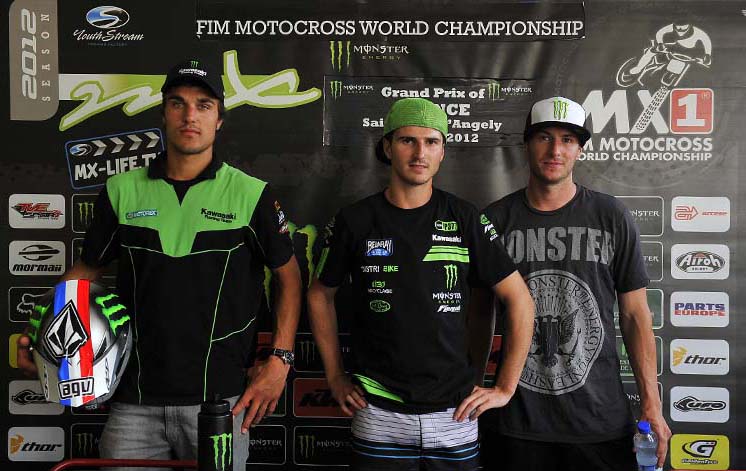 SAINT JEAN D’ANGELY (France), 2 June 2012 – Day one of the French Grand Prix took place today in Saint Jean d’Angely with high temperatures but with really good racing. The French crowd got behind their riders as usual and they cheered for them from the beginning of the day until the last chequered flag. Christophe Pourcel and Tommy Searle were the ones who dominated the qualifying heats, but there were many riders fighting for the lead, which gives good expectations for tomorrow.

After the MX1 and MX2 qualifying races, Saint Jean d’Angely also hosted the first race of the opening round of the UEM EMX250 Championship. The heat was disputed between Mel Pocock and Maxime Desprey, as the rest of the pack were more than 30 seconds behind the lead. It was finally Pocock who crossed the finish line first, but home rider Desprey was really close to the Brit. Third was Jeremy Seewer, and Stefan Olsen and Tim Gajser completed the top five.

MX1
CP377 Monster Energy Kawasaki Pro Circuit team have been lately focused with their starts and once again the proof was there and Christophe Pourcel took the holeshot. In the opening lap Christophe was overtaken by his brother Sebastién, but Christophe passed him back easily and kept the lead until the chequered flag.

The second position of the qualifying heat was for Kawasaki Racing Team’s Gautier Paulin, who got a really good start and fought for the lead during the first laps of the race. However, Paulin admitted that he made several mistakes, which made him open the gap with his compatriot, and he then rode safe in the second position until the end of the heat.

Rockstar Energy Suzuki World’s Desalle did a really good qualifying race. The Belgian did not start at the front, but he managed to find really good lines and went up to third by the end of the heat. Tomorrow he will have a really good gate pick, so he might be able to fight for the overall victory.

Red Bull KTM Factory Racing’s Antonio Cairoli reached the first corner together with Christophe Pourcel, but he then dropped down to fourth behind the Pourcel’s brothers and Paulin. The Italian managed to move up to third and while he was chasing Paulin for the second position, he made a mistake and went down to fourth behind Desalle. By the end of the race he was about to overtake Desalle, but he had to settle down with the fourth place, which is still a really good position for the main races tomorrow.

Honda World Motocross’ Bobryshev was back racing for the top positions and he succeeded in finishing fifth in the qualifying heat. The Russian is almost fully fit from his thumb injury and also his bronchitis, so it is just a matter of time to have him back fighting for the podium or even for the overall victory.

Sebastién Pourcel did one of the best starts of the season and he managed to finish sixth in the qualifying race, so he might be among the top five tomorrow in front of his home crowd of Saint Jean d’Angely. Philippaerts did a solid qualifying race and he ended seventh, ahead of home rider Boog, Gonçalves and Leok.

Ken De Dycker made a mistake in the opening lap and he had to start from the very last position, but the Belgian gave it all and crossed the finish line 17th.

Steven Frossard was riding 12th when he crashed and had to enter the pitlane because he could not stand the pain on his right knee. However, the French rider will be at the starting grid tomorrow to give it all in the main event.

MX2
Team Floride Monster Energy Kawasaki Pro Circuit’s Searle achieved his third qualifying race victory of the season today at Saint Jean d’Angely after battling with Jeffrey Herlings most of the heat. The British rider was third in the opening lap, but he quickly moved up to second and gave chase to Herlings, who was leading the race at that time. After five laps Searle managed to overtake the Dutch rider and he kept the lead until the end. However, Searle is aware that Herlings will not leave things that easy tomorrow, but he will do his best to go 1-1 and get some valuable points for the championship chase.

Red Bull KTM Factory Racing’s Herlings took the holeshot of the qualifying heat and he actually set really good time laps and open a decent gap, but Searle started to improve his rhythm and Herlings had to settle down with the second place. By the end of the heat, the KTM rider was really close to Searle, but he preferred not to make any mistake and keep the second position until the end.

The third place was for Jeremy Van Horebeek, who showed really good speed during the whole heat. He did not have a very good start and had to push from an initial eighth position, but in just four laps he was already fourth behind Teillet. He then managed to close the big gap which was between the two of them and Van Horebeek finished in a well deserved third position.

Rockstar Bud Racing Kawasaki’s Teillet did once again a solid qualifying heat, starting at the front and crossing the finish line fourth. The French young talent has already proved his talent in previous races, but he has been touched by bad luck and there has always been an injury preventing him to do better. At the moment he is almost fully recovered, so he is now fighting for the podium finish.

Another French rider completed the top five; Red Bull KTM Factory Racing’s Tixier did a really good start and although he lost the initial fifth position after three laps, by the end of the heat he overtook Butrón and crossed the finish line fifth. Tomorrow he will have a good chance to finish among the top five, as he counts not only with a very good start pick, but also with the support of the crowd.

Butrón, who obtained his maiden podium in Brazil, started third but he could not keep such position and ended sixth. The Spanish rider is struggling with a fractured rib due to a heavy crash he suffered in the national championship last weekend. However, Butrón has admitted that he can stand the pain and he expects to do well tomorrow at the main races.

Charlier, who was also on the podium in Brazil, finished seventh, and Roelants, Anstie and Lupino completed the top ten.

On his first appearance in the FIM Motocross World Championship this season, Arnaud Tonus obtained the best seventh lap time during the pre-qualifying practice. However, during the qualifying heat he made a mistake when he was riding seventh and crossed the finish line in the eleventh position. In any case, he has done really well so far, taking into account that he had only been training on the bike for one week before the French Grand Prix.