James Stewart – Nearly everyone knows about the crash that James suffered in the first moto at Thunder Valley. We have all had our fingers crossed hoping that James would return this weekend, and it sounds like our prayers have been answered.

Davi Millsaps – Having already suffered a dislocated elbow in the second moto at Hangtown, Davi also crashed while preparing for Freestone. Davi sat out Freestone and Thunder Valley to recover and spend time with his new baby son. Davi has been riding in California this week, and we believe we will see him at High Point this weekend.

Nick Wey – Nick Wey had been taking some time off after Hangtown to nurse an injury, but he will be at High Point this weekend.

Ryan Sipes – Ryan is currently dealing with a hand injury he sustained during a weird collision with Jason Anderson during the parade lap at the Las Vegas Supercross.

Marvin Musquin – Marvin injured his hand at the Salt Lake City Supercross. He had a plate and screws installed in his hand after the Las Vegas Supercross.

Gareth Swanepoel – Gareth had surgery on his right knee during the Supercross season. He is back racing, but is not at 100%.

Tommy Hahn – Tommy Hahn was having a great 4th place ride after pulling a holeshot and leading the opening laps in the first moto at Thunder Valley. Unfortunately, a rock would end Tommy’s day and take him off the bike for awhile. There is no word yet on his return.

Darryn Durham – Darryn injured his shoulder while testing for the motocross season a few weeks back. There is no set date for his return, but we do not expect it will be much longer.

Austin Stroupe – Austin crashed at the Dallas SX and was forced to have surgery on his collarbone. Stroupe announced on Twitter that he would be lining up at Hangtown, but Hangtown came and went and there was no sign of him. Sources now say that Stroupe has been released from his Star/Valli Yamaha contract. The reasons at this point are unknown, but we do know that Stroupe is healthy and has been racing locally and hanging out with his family.

Christian Craig – Christian had surgery on his wrist during the Supercross series. He has been riding and plans to return around Red Bud.

Gannon Audette – Gannon sustained a broken wrist while preparing for the Supercross season. There is no date set for his return, but he is back on the bike and expected to be back sooner than later.

Jarred Browne – Jarred is dealing with a pinched nerve in his elbow. He is expected to return in the later part of the National series. Jared is back on the bike practicing.

Matt Moss – Matt had minor surgery after the Las Vegas Supercross. He has been back on the bike since the later part of May, and it sounds like he will be back in action this weekend.

Cole Seely – Cole sustained kidney and liver injuries at the Salt Lake City Supercross. He is expected to return towards the end of the 2012 series.

Justin Bogle – The GEICO Honda rider had a nasty crash in practice at Hangtown and was obviously hurting in moto one when the best he could finish was 21st. The second moto went better for Justin as he scored a 7th, going 21-7 for 15th overall. After the race at Hangtown, Bogle tweeted that he is nursing an injury he sustained during the Supercross season.  He has taken time off to have his knee fixed and is expected to return in a few weeks.

Tyla Rattray – After being called up to the Factory Kawasaki tent to fill in for the injured Ryan Villopoto, Tyla was ready to show what he could do in the 450 class. Unfortunately, on the second lap of the first moto, Tyla took a rock to the hand and broke it. Tyla will miss several rounds of the series but will return before the season’s end.

Ben Townley – After Chad Reed was injured at the Dallas SX, many wondered if we would see the TwoTwo semi at the Nationals, and just a month before they started, it was announced that Ben Townley would be riding for the team. Unfortunately, Ben also suffered a season-ending injury. There is no word yet on whether Townley will return to racing under the TwoTwo tent or back in America.

Josh Hill – Josh is back to riding and training at his home in Oregon. His return is set for the 2013 SX series.

Dean Wilson – After suffering a shoulder injury at the Seattle Supercross, Wilson wanted to give the outdoors his best shot. Deano was anxious to rock the #1 and try to defend his 2011 250 AMA Motocross Championship. He made it ten laps into the first moto before his shoulder dislocated. It sounds like Wilson will be having surgery to repair his shoulder and may not return for the remainder of the Lucas Oil Pro Motocross Championship. 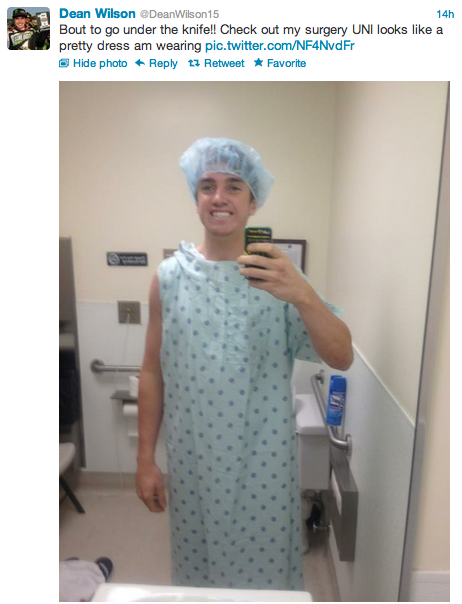 Ryan Villopoto – Ryan, after clinching his second-straight Supercross Championship, tore his ACL at the Seattle Supercross. The multi-time champion decided to forgo the defense of his 2011 Lucas Oil Pro Motocross 450 Championship to repair his ACL and may make his return as early as the Monster Energy Cup in October.

Ryan Morais – Ryan Morais suffered multiple injuries including a broken jaw, collapsed lung, fractured vertebrae and broken ribs at the Los Angeles Supercross. There is no word on when he will return to racing, but he is definitely on the mend.

Chad Reed – Reed suffered several injuries at the Dallas Supercross including two broken ribs, a broken spinous T6, a torn ACL and a fractured tib fib, so there is no telling which injury put Chad on ice for the 2012 season. Chad has announced that he will return to the line for Anaheim 1 in 2013. Reed and Grant Langston took to Twitter to stir the pot on a return to racing this year, though.

Jimmy Decotis – Jimmy tore his ACL practicing. It is unlikely we will see him before 2012 is over.

Trey Canard – Trey suffered a broken back at the Los Angeles Supercross. His spinal injuries were serious, but he is expected to have full recovery. We expect to see the Oklahoman on the line for Anaheim 1 in 2013.