Back in May, three-time AMA Arenacross Champion Josh Demuth went down hard while practicing and sustained several broken bones including two shattered legs. We are now hearing that, due to an infection, doctors had to amputate his right leg below the knee. There has been no official confirmation, but Racer X Online reported earlier that two sources close to Josh have confirmed the news. We will post updates as soon as we know more. 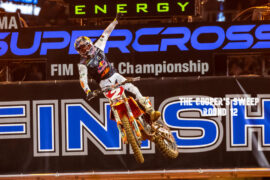