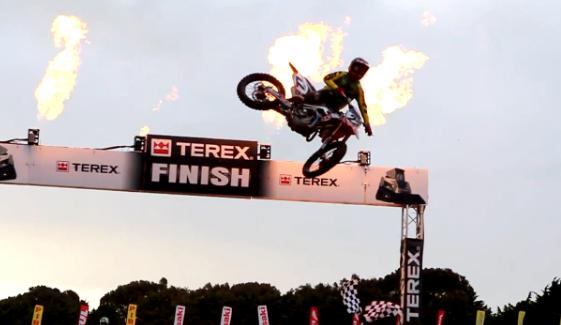 When the Pro Open guys hit the tight Phillip Island course to see if Chad Reed was still the top dog, qualifying suggested that Reed may not get his own way. Although a number of riders finished with faster lap times, we all know it’s the main that counts. So how did it go down? Read on for the details.

With a light drizzle starting to fall, heat one of the Pro Open’s hit the gate. Cheyne Boyd got a great jump off the line and held on to secure the holeshot. Right behind him were Jake Moss, Tye Simmonds, Matt Haworth and Craig Anderson. With only eight short laps (times in the 35’s for the fastest guys), Todd Waters had his work cut out for him back in sixth place. He went to work on Haworth and once past, targeted Anderson.

Boyd managed to hold off Moss for three laps, but eventually succumbed to the pressure. With the privateer Honda trio running up front, Waters pushed hard and eventually got on the back wheel of Simmonds. Both riders passed Boyd on the last lap, but with time running out, Waters couldn’t get past Simmonds. Moss rode mistake-free to take a comfortable win, with Simmonds and Waters rounding out the top three.

The unpredictable weather at Phillip Island continued, with the rain continuing to fall in isolated showers. It was almost like the track was purposely being watered for each race! After a mediocre qualifying performance, Chad Reed came out and nailed the holeshot, with current championship leader Jay Marmont right on his hammer. Mackenzie also charged to the front and was able to pass his teammate at the second corner. Meanwhile, Lawson Bopping tangled with Jason Reed and both guys went down. The crash moved Bopping’s clutch lever, which he worked frantically to get back into a usable position. Townley got a much better start, as did Tim Vare. Daniel McCoy found himself back in sixth place, much the same as Waters had in heat one.

Fully understanding his predicament, Bopping started to put on a charge to pull back as many places as possible. Townley looked a lot stronger than his performance at Dubbo and made short work of Mackenzie. McCoy was also putting in a solid ride, but with the track short and tight, making significant ground proved difficult.

Meanwhile, up front it was all Reed and Marmont. The gap between the two stayed at around the one second mark for most of the heat, before Marmont made an uncharacteristic error on lap seven. This allowed Townley to pass and Reed to ride away for an easy win. McCoy finally managed to pass Mackenzie on the last lap for fourth place, while Bopping had to settle for sixth place.

In the post race interview, Reed was asked about his current physical condition, to which he replied “I’m fat and unfit and that’s why I’m here to race!” Yeah, I have the same problem.

After a break for the Pro Lites heats and GP qualifying, the riders headed out to give fans another taste of what was to come in the main event. Out front again was Simmonds with the holeshot, followed by Justin Carafa, Reed and Marmont. Billy Mackenzie had a massive crash on the second straight, sending him and his bike cartwheeling through the air. He was forced to DNF, but would return to easily win his LCQ. Carafa got passed twice on lap one, relegating him to fourth position. The other major incident of the heat was Marmont’s crash on lap two. Although uninjured, by the time he remounted and got going he was back in ninth place. The crash moved Sam Duncanson into third position, where he would remain. Reed chased Simmonds throughout the heat, closing the gap from around three to one second. However, despite the pressure Simmonds remained composed and rode flawlessly to take the win. Marmont also stayed calm and moved his way up to fourth place to ensure a decent gate pick.

Jake Moss shot out of the gate to head the pack into the first turn. Townley, Waters, McCoy and Anderson settled behind him, with Bopping getting an unspectacular start back in seventh. McCoy passed Waters on the first lap and by lap two, Bopping had made his way to fifth place. While McCoy was putting a firm block-pass on Townley to take second place, Bopping and Anderson came together in one of the many 180 degree turns. Both riders went down, costing both of them vital positions. After some heavy pressure from Waters, Townley stalled into a corner, allowing the Motul Pirelli Suzuki rider to claim third position. Although not completely checking out, Moss ran away with the victory, followed by McCoy and Waters.

As the Pro Open field moved onto the gate, the place was abuzz with celebrity racers, both past and present. I am sure I’ll leave out some of those in attendance, but Rossi, Hayden, Edwards, Doohan, and Schwantz were all under the Monster Energy viewing platform. Together with the eight Monster girls, it was quite a spectacle.

Chad Reed once again smashed the holeshot, with Marmont in hot pursuit. The usual suspects all got through the first turn cleanly, although the tight nature of the course left some riders behind the eight-ball. Reed put in a couple of blistering laps in the hope of checking out early, but Marmont was having none of it. McCoy was again showing that his Dubbo result was no one-off, tucking into third. Billy Mackenzie and Jacob Wright (toughing out a hand injury) filled out the other top five positions.

With Reed holding off a consistently quick Marmont, Bopping and Moss in particular were putting on a charge to make up lost ground. As Wright and Mackenzie consistently moved back through the pack, Bopping and Moss moved up to fourth and fifth positions. That is as far as each rider would progress and Moss in particular was disappointed. His comments during the presentation of top privateer rider highlighted this. “I have worked way too hard to finish fifth. I have never worked so hard in my life and I know I can do a solid twenty laps.” He also made it clear of his ambitions to return to racing in the US and the need to impress. “There are still two rounds to go. My goal is still to go back to America so I really want to get up there and battle with Chad.”

Reed built his lead up to about three seconds before lapped riders through a spanner in the works. Unable to triple one section, Marmont closed the gap back to just on a second, but was unable to apply the pressure necessary to force an error. With limited passing opportunities, Marmont would ride smart to second place and maintain his championship lead. McCoy also continued to show good speed and while unable to catch Marmont, he held off those behind him quite comfortably for third.

At the end of the day, it was probably fitting that Reed won the inaugural Supercross at Phillip Island. He may not be in the best condition of his life, but his display was clinical and his impact on the fans is unequivocal. Marmont showed he is worthy of holding the red plate with another classy display and McCoy once again justified his factory ride. With the top ten riders all capable of podium results, there are some riders who may have missed out, but that will just serve to make them even hungrier come Toowoomba. Bring it on! 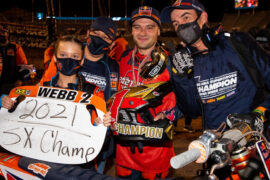 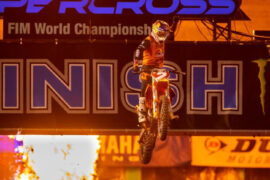 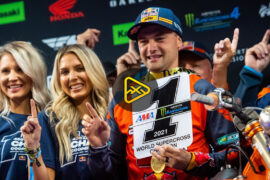