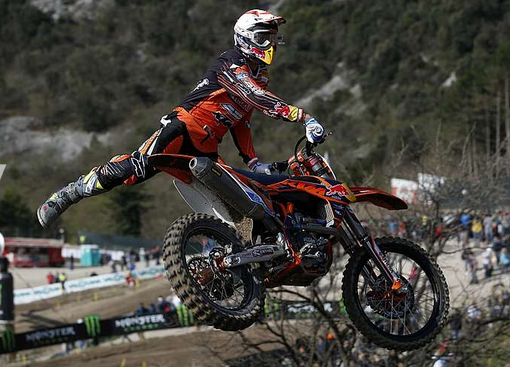 Red Bull KTM Factory riders completely dominated the MX GPs of Italy on Sunday with Tony Cairoli and Ken de Dycker finishing 1-2 in MX1 and Jeffrey Herlings and Jordi Tixier 1-2 in MX2.
The KTM riders were in a class of their own on the difficult hard pack circuit of Arco di Trento in Trentino, Italy in the shadow of the Alps.

The Italian fans came out in force to support Tony Cairoli who took his 57th GP victory to be level with Belgian hero Joel Smets to be equal second in total GP wins in the history of the sport. The only rider with more GP victories is KTM team manager Stefan Everts with 101 GPs to his credit. Jeffrey Herlings too passed a statistics milestone. He now has 20 GPs to his name and is still only 18. He is unbeaten this season having won all of his eight races! 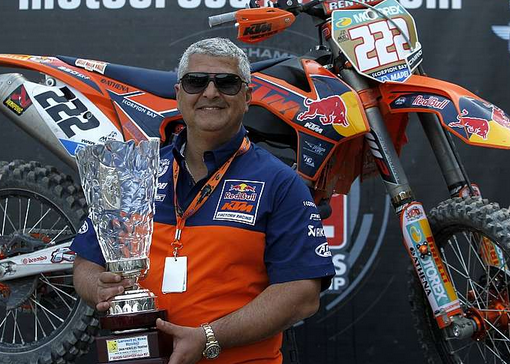 MX1
To the delight of the Italian fans, Cairoli had two perfect starts, sweeping across the start straight with lightning speed and winning each race from gate drop to checkered flag. The rest of the field saw nothing but the back of his light and nimble KTM 350 SX-F and the flash of his hallmark ‘Valentino Rossi’ fluorescent yellow riding boots.

It was also another strong weekend for factory teammate Ken de Dycker on the KTM 450 SX-F whose 4-2 result gave him the second podium spot. Cairoli and de Dycker also lead the points after the first four GPs with 192 and 155 respectively. Other KTM riders also made their presence felt with Xavier Boog and Rui Goncalves both having top ten finishes.

MX2
But while Cairoli dominated both of his races, Herlings made an amazing charge from behind in both of his races, not only to underline his immense level of fitness but also to prove he is equally competent on a tricky hard pack surface like Arco di Trento as he is legend on sand. And while he was the clear winner in both motos, it was his factory teammate Jordi Tixier who took the holeshot and the lead in the opening race. The young French rider was both fast and confident and held onto the front spot for most of the opening race. Then Herlings moved into second place with eight minutes to go and eventually made the pass to take his seventh moto win for the season. Both Herlings and Tixier ride the KTM 250 SX-F.

The second MX2 race was also a problematic start for Herlings after he hit the start gate and was at the back of the field at the first corner. This time it was Spanish KTM rider Jose Butron who took the holeshot and the race lead while Tixier was around tenth in the opening lap. Then on a surface that was both technically and physically demanding – hard pack with lots of loose stone and deep burns – it took Herlings only until lap seven to take control of the lead and the race. He went on to win by 31 seconds and preserve his perfect score card this season.

The weekend was also a massive confidence booster for Tixier, who finished fourth in race two for second overall in the GP while Butron took overall third to make it a clean sweep of the podium by KTM riders. Herlings and Tixier lead the points in the class with 200 and 141 respectively. 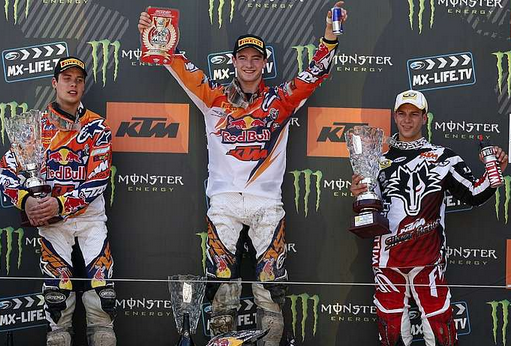 Earlier in the day, young Pauls Jonass of Latvia won both motos in the opening round of the EMX125 championship to have a strong start to his championship challenge!

Tony Cairoli: “I didn’t expect to do that well her because its not my favorite track and yesterday I was struggling a bit with the hard pack. I know I had to make two good starts because everyone here has a good speed. So I got the two holeshots and I could push to the last lap. There was more tension in the first race because I had Paulin and Desalle right behind me but in the second I pushed for the first 20-25 minutes. I knew I had Ken behind me and he was controlling the riders behind him so we had a pretty nice race together.”

Ken de Dycker: “I had a good win yesterday for pole but I didn’t get a good start in the first moto. I had the speed but I wanted to save something for the second race. But overall a good second moto and a good GP. I think we’re having lots of success because we train hard and everyone knows that the KTM bikes have been on top now for I think five years. But behind the scenes it’s also the fun things we do together – that’s what motivated everyone.” 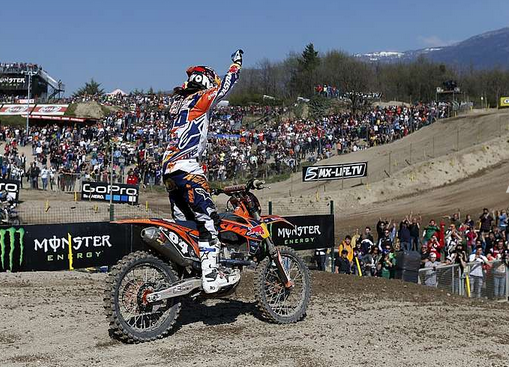 Jeffrey Herlings: “The riding was really good. There’s just one thing to work on and that’s the start but in Bulgaria that will be less important because you have a 180 degree turn so hopefully we can work on that and maybe have some new set up for the bike. You know even if its hard pack or sand it doesn’t really matter anymore. I’m the fastest on all the tracks up to now so I hope to have this consistency, not to make mistakes and not give up the dream of being undefeated.”

Jordi Tixier: “I got a good start in race one and it was so much easier for me to stay in front. But I had a bad start in the second race and was back at tenth. It was really difficult to pass on the first laps and I had to really attack to get into fourth place. I tried to close the gap but it wasn’t possible so I decided to stay in fourth for second overall in the GP.” 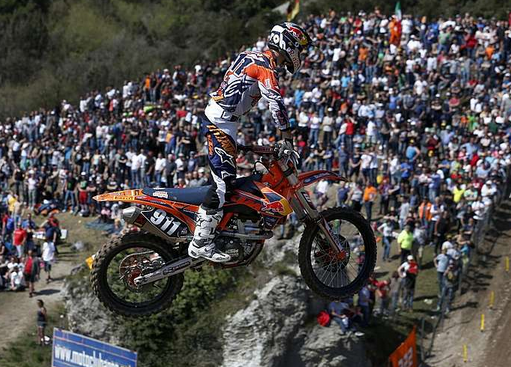 Pauls Jonass: “I made it happen today. It was a really good two races but I need to work on my starts and then it will be easier for me. Now I will work hard to keep this first place and try to hold onto it until the end of the season.”

Ferrandis Charges to Fifth at Atlanta 1