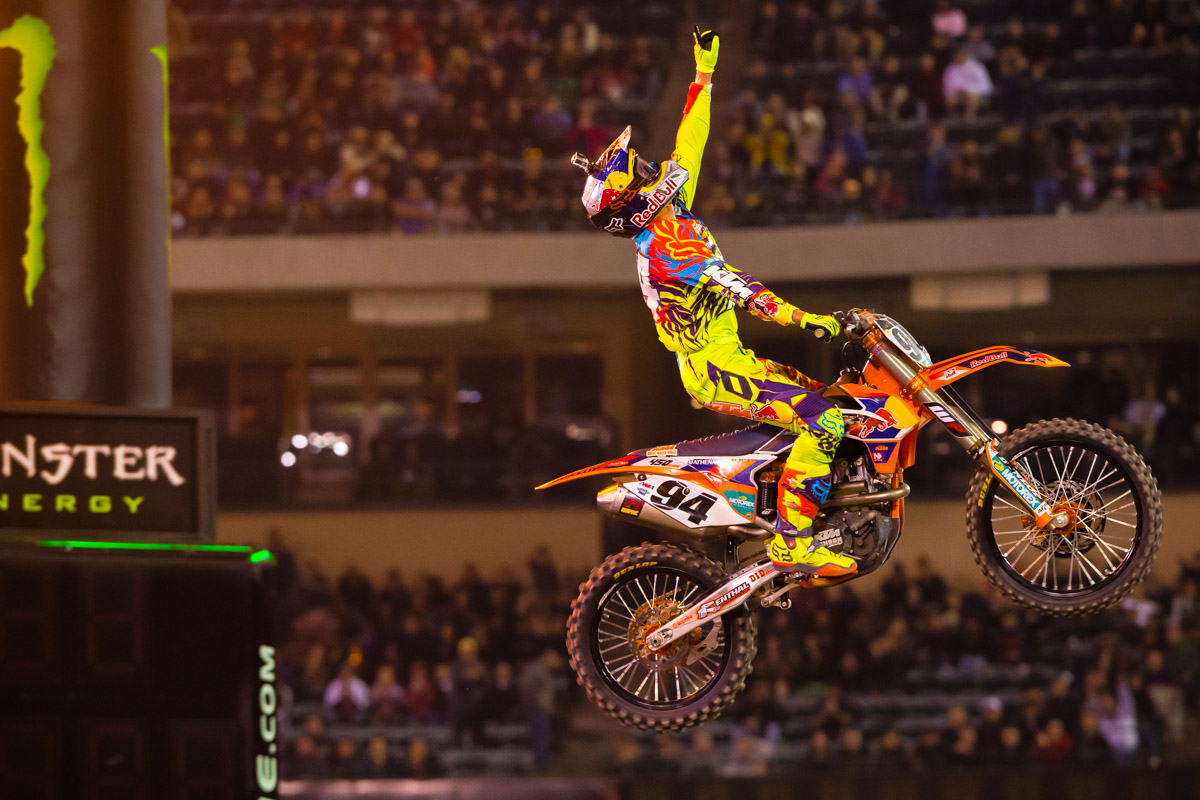 Media day is Thursday, January 9, from Noon-2:00 p.m. locally (MT). Riders will be available for interviews and will ride the track for the media.

In front of a sold-out crowd of 45,050 at Angel Stadium and a captive audience on the sport’s new television home, FOX Sports 1, the first race of 2014 season left a lasting impression with an exciting night of competition in both the 450SX and 250SX Classes. At the end of a night full of anticipation for the season ahead, it was Roczen and Anderson who emerged victorious and control the early championship battles heading into the desert.

It was reigning three-time 450SX Class Champion Ryan Villopoto who set the tone early last Satuday night in Anaheim, Calif., when the Monster Energy Kawasaki rider grabbed the lead out of the gate and led the first eight laps of the 20-lap Main Event comfortably. However, on Lap 8 Villopoto lost traction in a turn and went down, handing the lead to Roczen and dropping him to fifth.

Roczen paced the field for the remainder of the Main Event, but was challenged for the lead by Yoshimura Suzuki’s James Stewart on Lap 15. Stewart attempted to pass Roczen in the whoops but lost control of his bike and suffered a crash that took him out of competition. Roczen’s victory was the first of his 450SX Class career and was made even more significant for KTM when fellow Red Bull KTM rider Ryan Dungey made a late pass on Discount Tire Racing/TwoTwo Motorsports’ Chad Reed to give the brand a 1-2 finish. Villopoto rebounded to finish fourth.

“This is insane,” said Roczen on the podium. “I got off to a good start and was holding on really tight. When there were four laps to go, I realized that I could win.” 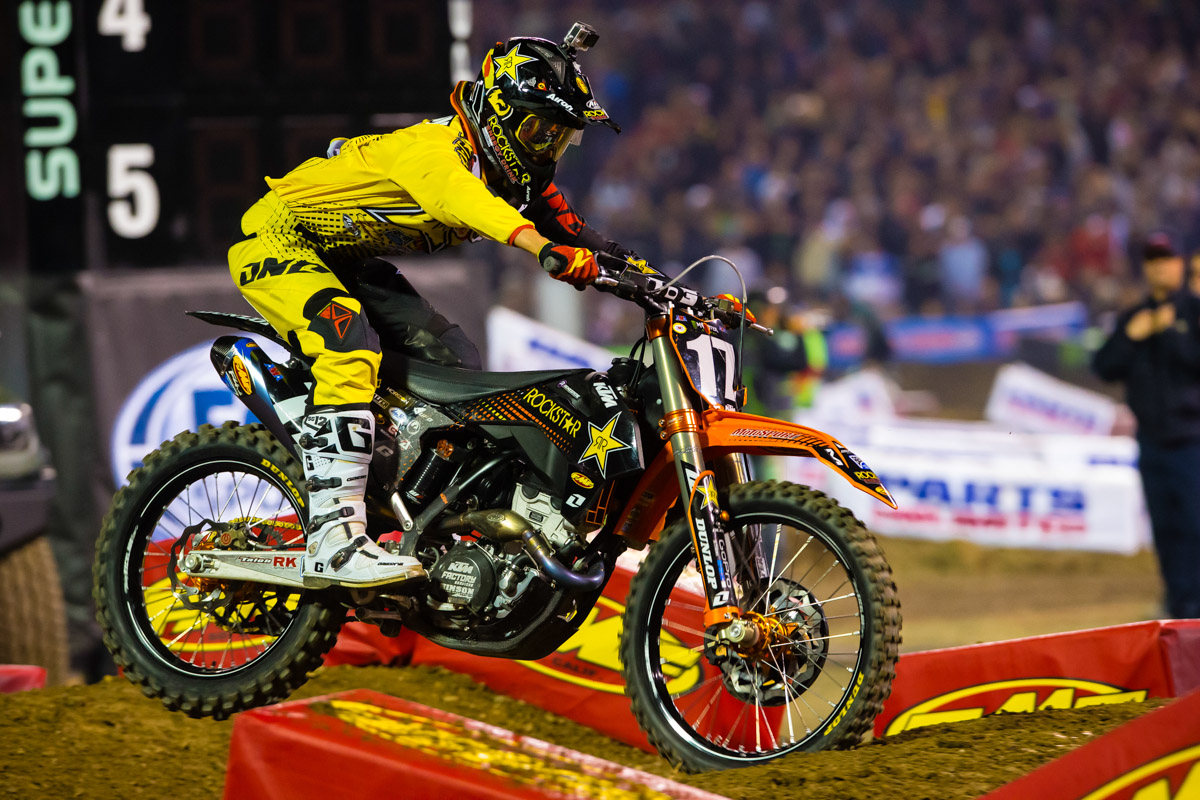 Anderson capped of a dominant evening for KTM in the first race of the Western Regional 250SX Class Championship. After taking the lead to start the 15-lap Main Event, Anderson was immediately challenged by Troy Lee Designs/Lucas Oil/Honda’s Cole Seely. The former race winners did battle before Seely took over the top spot on Lap 3. He maintained a comfortable margin on Anderson until the late stages of the race until Anderson made a final run that was capped off with an aggressive inside move on the final lap with two turns remaining. It was Anderson’s second career win and his second win in the last three races.

“The pass was [risky] on Cole (Seely),” said Anderson on the podium. “I didn’t want to be dirty but I had to put it in there, and I am glad it worked. I look forward to riding into Phoenix with the red number-one plate. This is only my second career win, so it is big for me.”

This weekend will mark the 16th time the gate has dropped for a 450SX Class race in Phoenix. An average of 44,430 fans have come out each year to see the sport’s greatest battle it out for their division’s prestigious championship titles at Chase Field. Stewart holds the record for most wins in the 250SX Class in Phoenix, and is tied with Ricky Carmichael for the most wins in the 450SX Class with four inside Chase Field. 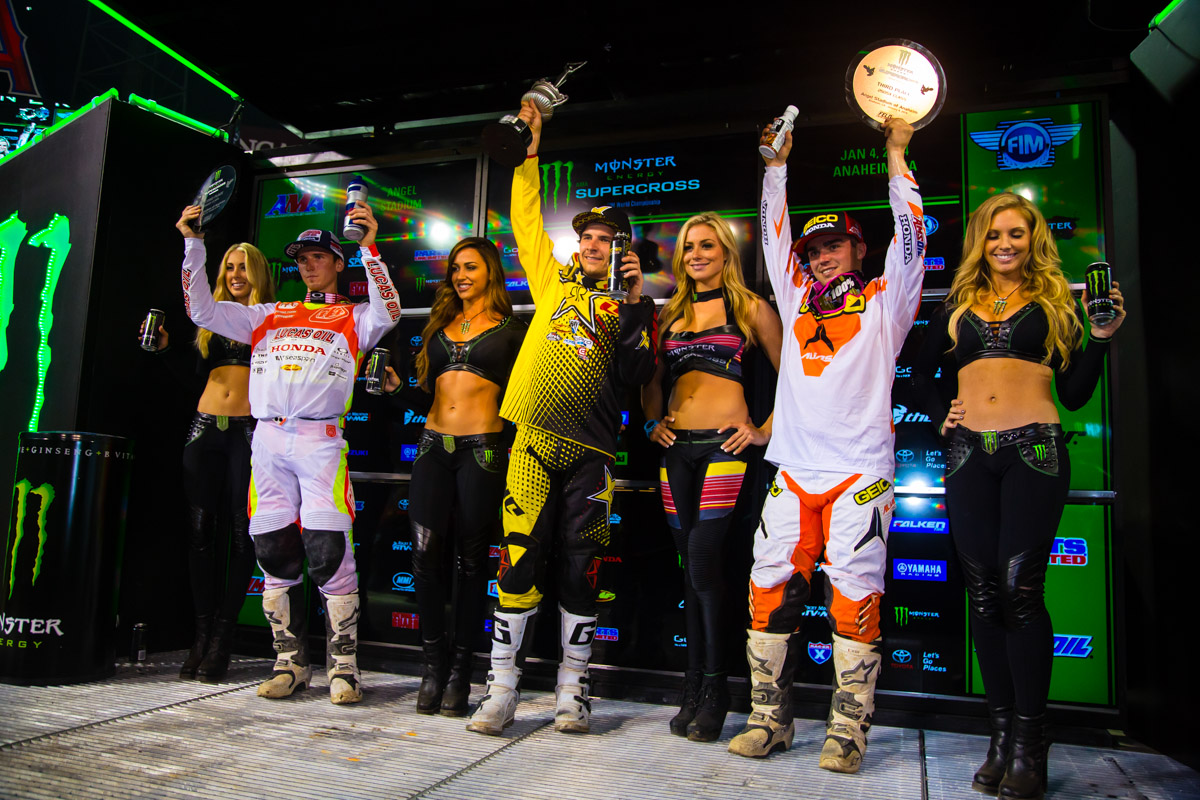 Tickets are available at the Chase Field Box Office, all Ticketmaster outlets, charge by phone (800) 745-3000, or online at www.SupercrossOnline.com or www.ticketmaster.com. Practice and qualifying begin at 12:30 p.m. and the Main Event starts at 7:00 p.m. Front Row Club Level tickets are $85 Adult/Child; Club Level $67 Adult/Child; Gold Circle $42 Adult/Child; Front Row Upper Bowl $35 Adult/Child; Mid Level $30 Adult/$10 Child; Super Saver $22 Adult/$10 Child. Fans can also get in to the Pits for FREE from 12:30-6 p.m. Race Day when they recycle a MONSTER Energy Can at the stadium’s pit entrance (valid only with event ticket). 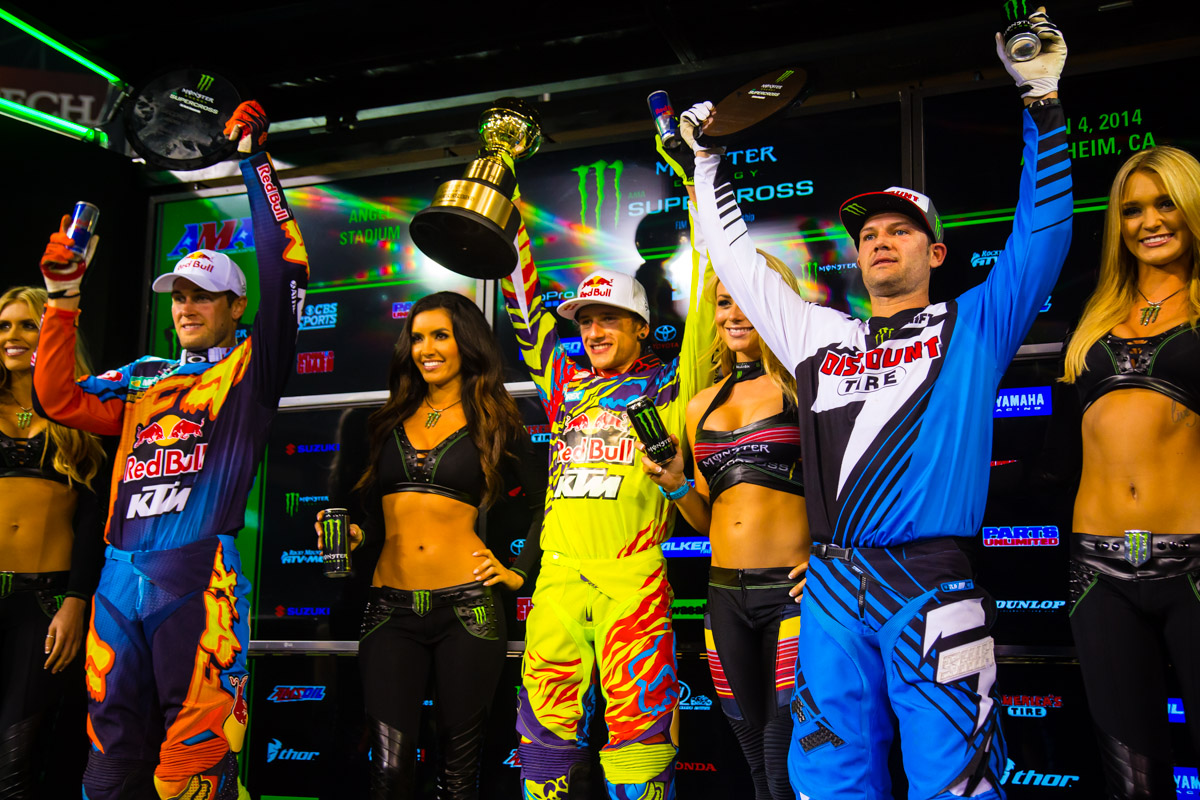 Past Winners in Phoenix 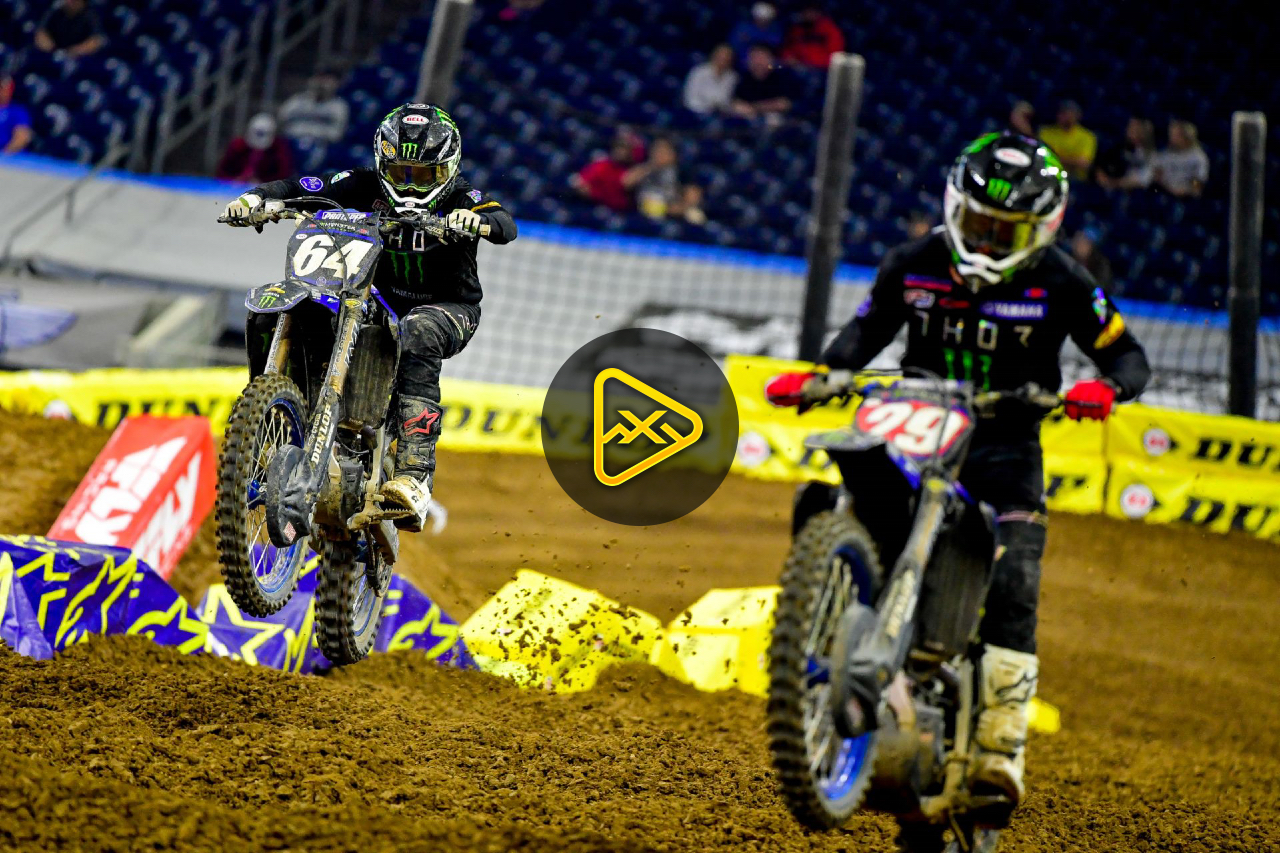 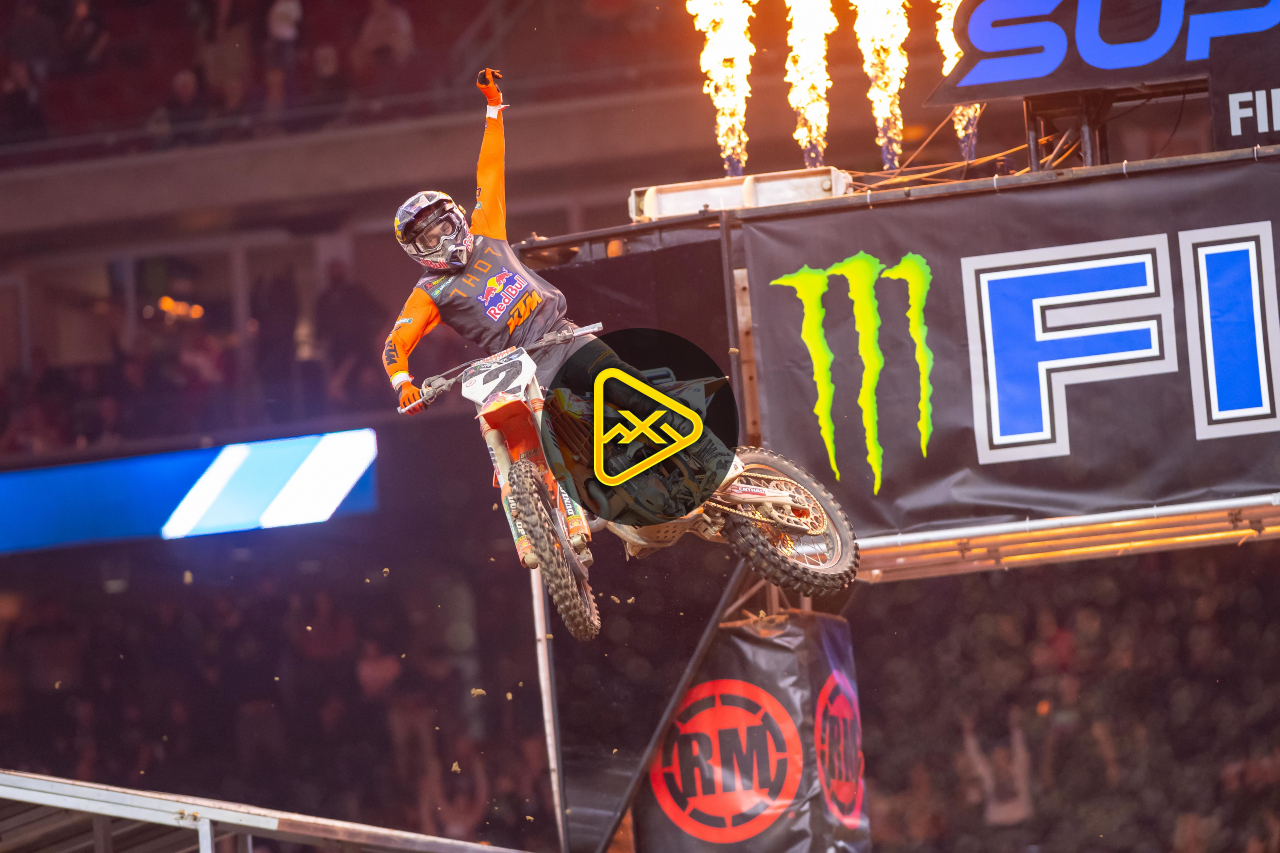