The 2014 Monster Energy Supercross, an FIM World Championship, headed down to beautiful San Diego for the final stop of the 250SX Western Regional Championship and the 2014 San Diego SX before the series heads east and the West riders go into an eight week hiatus. At the last stop in Anaheim, Monster/Pro Circuit/Kawasaki’s Dean Wilson took his team manager, Mitch Payton, off of suicide watch with a win. Deano’s win, coupled with a second place finish by Troy Lee Designs/Honda’s Cole Seely and a fifth place finish by Rockstar Energy/KTM’s Jason Anderson, moved Deano back into the Championship hunt and deadlocked Anderson and Seely at the top of the points. With that, the mighty Pro Circuit squad—who was shut out on Championships in 2013—was back in the Championship hunt, but the San Diego SX would prove bittersweet for Mitch and his team.

When the gate fell on round number six in Qualcomm Stadium last night, Wilson picked up right where he left off last weekend at A3. The Scottish-born Florida resident grabbed the holeshot and looked poised to keep the momentum flowing, but on lap two, Wilson hit the deck hard in a rhythm section. The crash brought his momentum, his main event and, most likely, his chance at a 2014 250SX Western Regional Championship to a screeching halt. The #15 tried to remount quickly, but damage to his machine sustained in the crash sent him to the mechanics’ area. In the end, Deano reentered the race a few laps down and finished a disappointing twenty-first—scoring just 1 point and heading into the break a massive thirty-three points back. 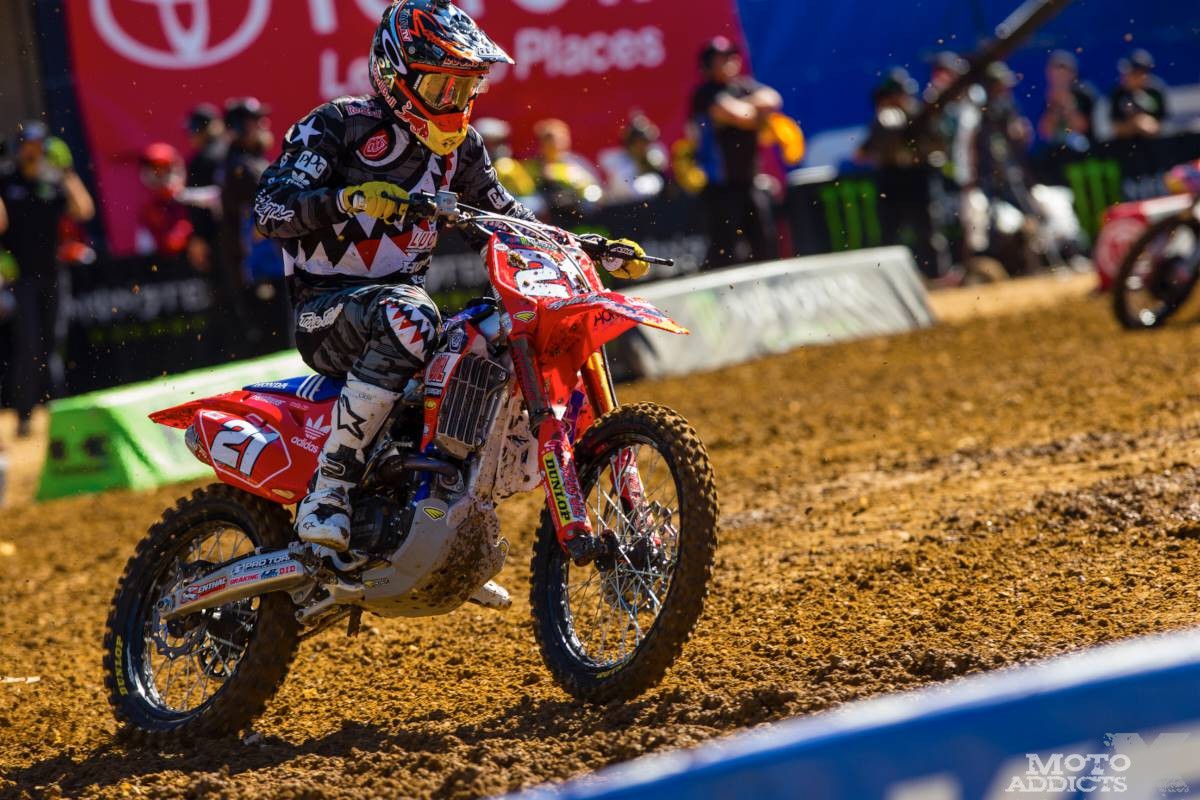 Seely moved into a tie for the lead in the Championship with Anderson after his 2nd at A2, but came into San Diego feeling sick from possible food poisoning. Photo by: Hoppenworld

Behind Wilson early one was Troy Lee Design’s Malcolm Stewart and his Monster/PC/Kawasaki teammate Justin Hill. Hill made quick work of Malcolm and inherited the lead from his teammate when he went down. Hill has been gaining some serious speed and momentum over the last few weeks and he used both to sprint away early in the main event. Anderson—who got a mediocre start—made his way past Malcolm and into second on lap seven but, after cutting Hill’s lead down to just two seconds, was not able to close further on the man from Yoncalla, Oregon. From laps eight through twelve, Hill was consistently the fastest man on the track, and by lap thirteen, he had put away the #17. While Anderson has become synonymous for his late-race charge and last-lap passes for the win in 2014, it would not happen for him in San Diego. The sophomore professional with the #35 on his bike would stay poised and ride her home for his first-ever win as a professional. Anderson, who would hang on to finish second, grabbed his fifth podium of 2014 but, more importantly, broke the tie with Seely and now takes a four-point lead with him into the eight week break.

The man filling the last step of the box last night was Malcolm Stewart. The man better known as “Mookie” rode a smooth, consistent and surprisingly mistake-free main event to stand on an SX podium for the first time in his career. On paper, Mookie got his first ever SX podium at Anaheim 2, but because he wasn’t awarded a third place finish until after Anderson was penalized for jumping on red-cross flag, he did not stand on the podium for podium celebration, so while Mookie has cashed a podium bonus check, San Diego may feel like his first-ever podium finish. 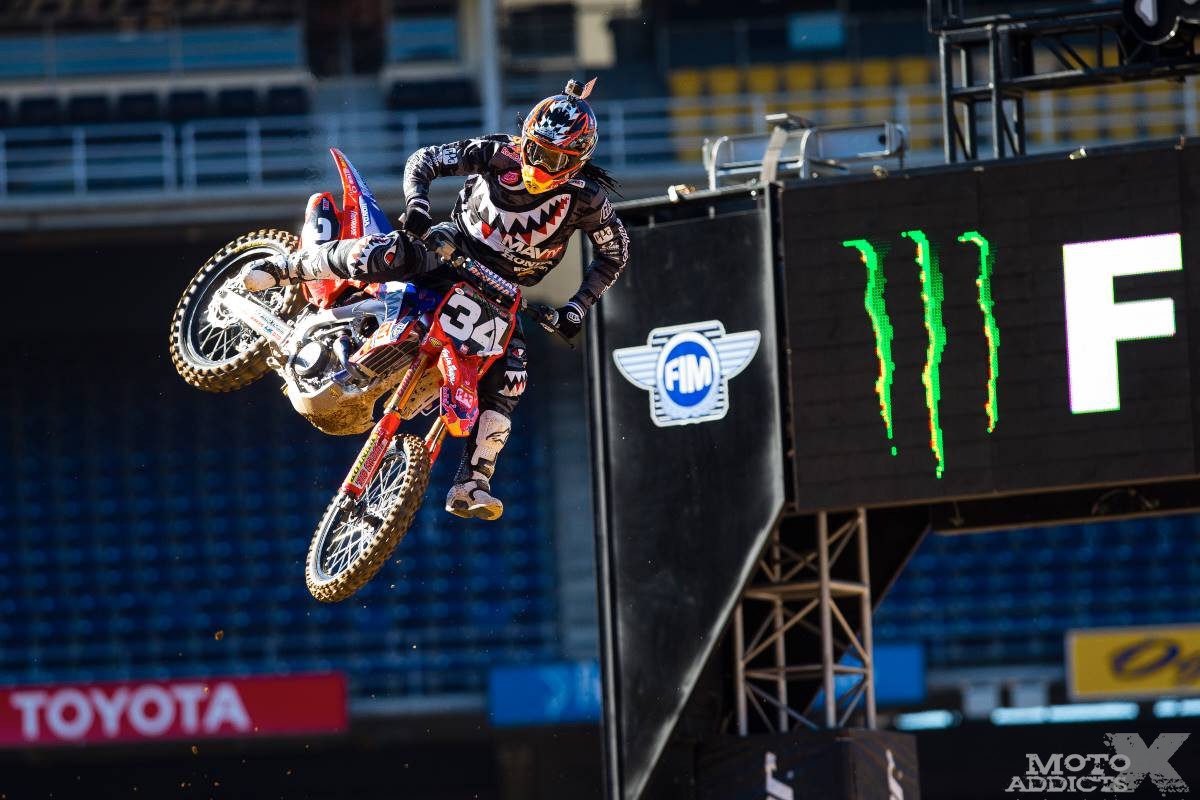 Malcolm looked fast and ready to fight for a podium all day long. Photo by: Hoppenworld

Behind the podium finishers, Cole Seely matched his worst finish of 2014 with a fourth. The kid from Simi Valley, California arrived in San Diego with his #21 over a red background but seemed to struggle with the circuit all day. In qualifying early in the day, Cole was nearly a full second off of Wilson and Anderson, and unlike at other rounds where he didn’t having blazing qualifying speed, he was not able to find it in the main event. With that, Cole lost four points in the Championship to Anderson. He now has eight weeks to find the speed needed to come back in Houston and begin the three-race fight for his first-ever 250SX Championship.

The man at the tail end of the top five was celebrating his first-ever top five finish as a rookie. Troy Lee Deigns/Honda’s Shane McElrath has been surprising a lot of people in 2014, and the recent Loretta Lynn’s graduate continued to surprise in San Diego. After a mid-pack start, the #87 put his head down and charged towards the front of the field. The freshman rode strong for all fifteen laps, and after receiving a couple gifts—crashes from Wilson and Star Racing/Yamalube/Yamaha’s Cooper Webb—Shane rode home in fifth. Shane’s fifth moved him up to 8th place in the Championship standings. 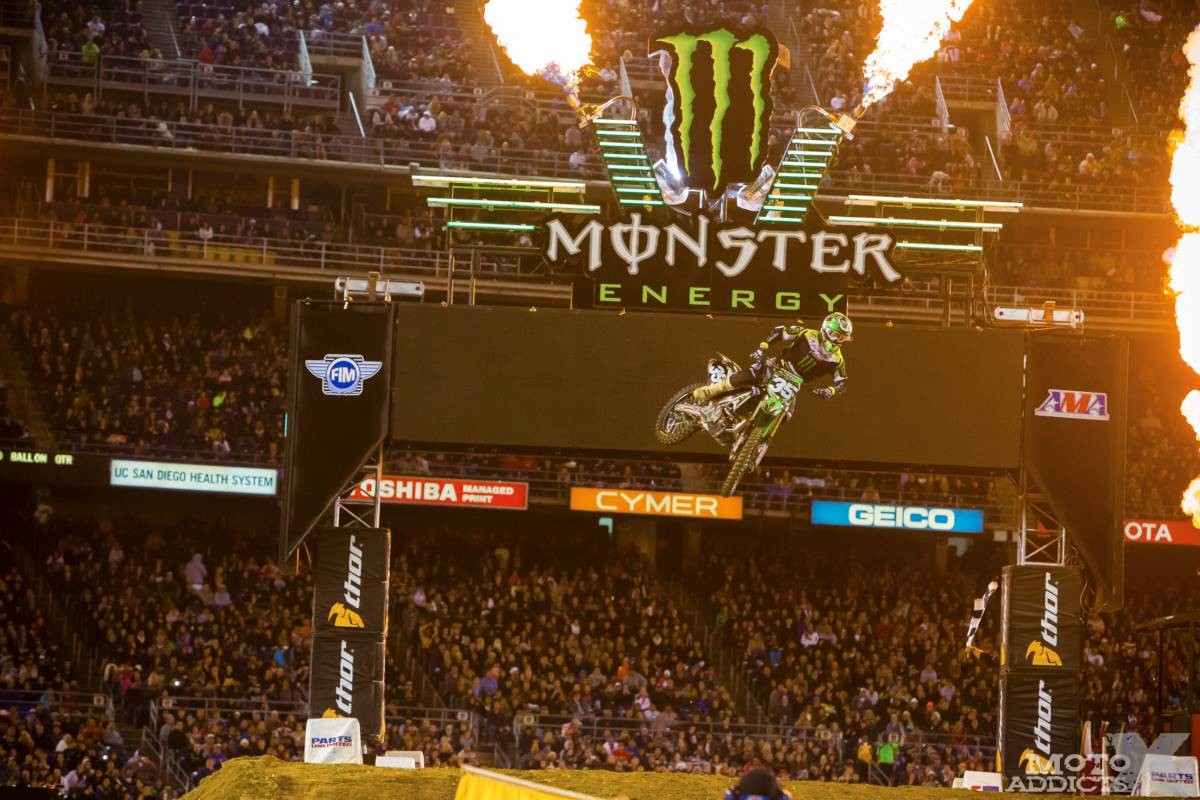 Hill lights the candles for the first time in his professional SX carer. Photo by: Hoppenworld

Next stop for 250SX Western Regional Championship is in Houston on April, 5th. 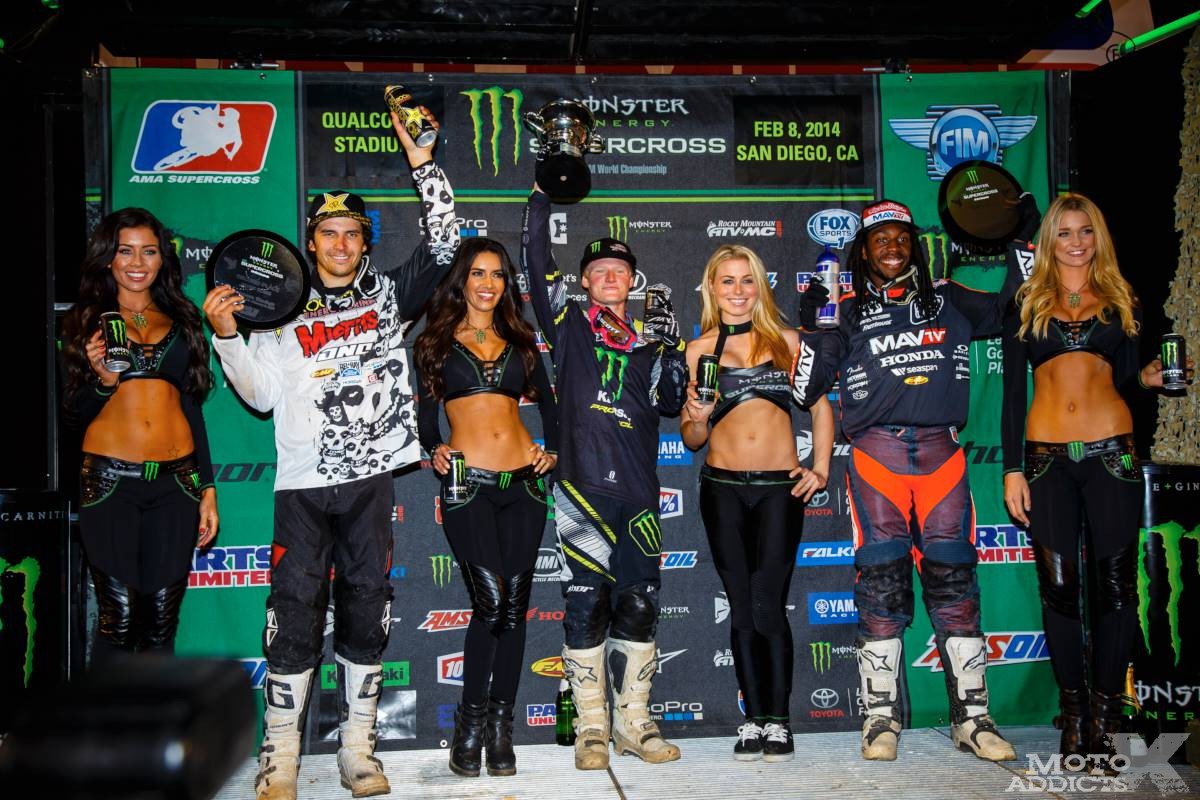 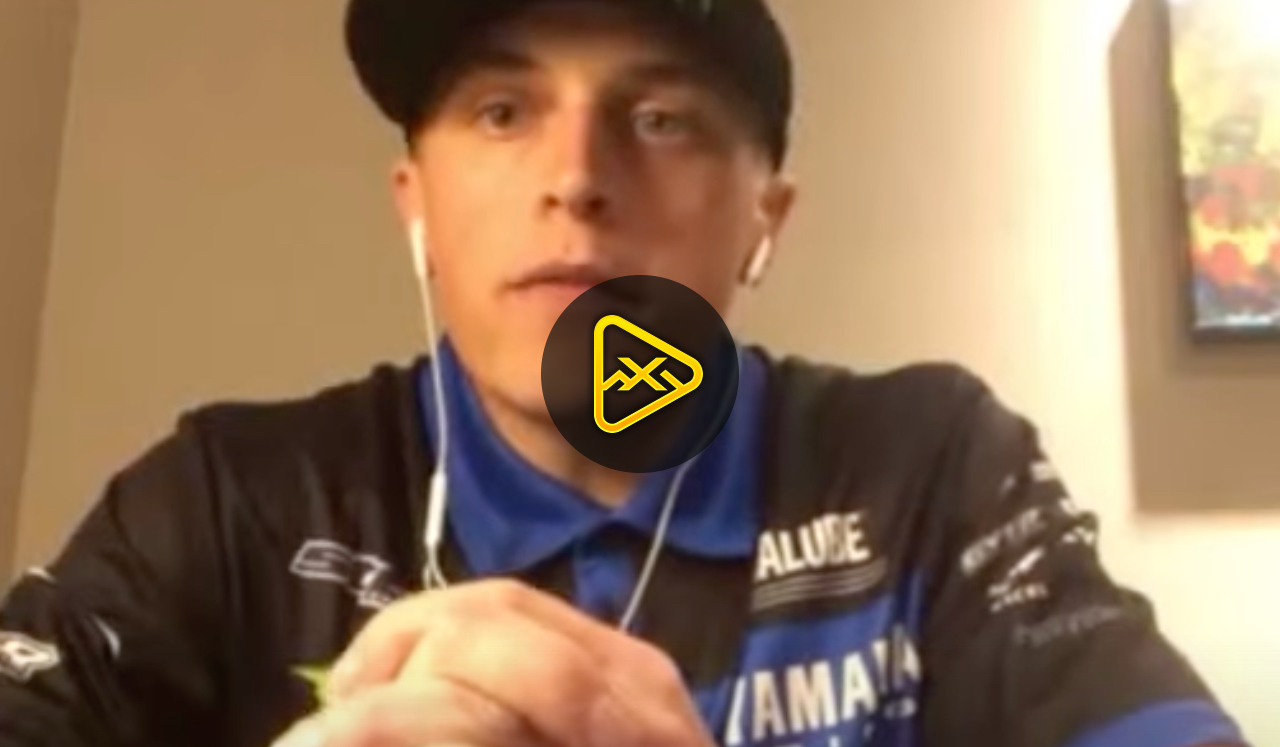