Stewart Moves into Second on All-Time Wins at Toronto SX

TORONTO (March 22, 2014) – In front of 48,892 fans inside the Rogers Centre, the 2014 Monster Energy AMA Supercross, an FIM World Championship, made it’s lone international stop in Canada’s largest city on Saturday night. Team Yoshimura Suzuki’s James Stewart raced to his fourth 450SX Class victory of the season with a come-from-behind effort that puts him in sole possession of second place on the all-time wins list at 49. In the sixth race of the Eastern Regional 250SX Class Championship, GEICO Honda’s Justin Bogle took advantage of a strong start to capture his first career Main Event win.

Red Bull KTM’s Ken Roczen Nuclear Cowboyz® Holeshot Award to start the 20-lap 450SX Class Main Event with Monster Energy Kawasaki’s Ryan Villopoto and Team Honda Muscle Milk’s Justin Barcia in tow. Roczen and Barcia took over the top two spots and engaged in a battle for the lead before Barcia made the pass stick on Lap 3. Stewart began the Main Event with a mid-pack start and crossed the line in ninth on the opening lap. He immediately began making a climb through the field, on a steady march to the front.

Barcia opened a comfortable margin on Roczen, who started to lose time to his teammate Ryan Dungey in third, as well as Stewart, who moved into fourth place on Lap 7. Stewart slipped by Dungey for third on Lap 11 and then made the pass on Roczen one lap later. Stewart then closed the deficit on Barcia and pressured him for a lap before making the winning pass on Lap 14. That same lap, Dungey passed Roczen for third.

Stewart pulled away in the closing laps to post back-to-back victories and become the winningest rider in the championship this season. Barcia grabbed a season-best result of second, holding off a hard-charging Dungey in third. Stewart’s 49 career wins breaks a tie with five-time Monster Energy Supercross Champion Ricky Carmichael on the all-time list. Stewart now sits 23 wins behind the record of 72 held by seven-time Monster Energy Supercross Champion Jeremy McGrath.

“That was probably one of my best races ever, I’m speechless,” said Stewart. “To pass [Ricky] Carmichael and move into second on the all-time wins list is special. This hasn’t even set in yet. The fans kept me motivated tonight. I heard them through every pass, it was great.”

Current 450SX Class points leader Villopoto endured his toughest day of the season en route to a sixth-place finish. Villopoto did not log a single lap of afternoon practice after his team reported he was suffering from food poisoning. A top-10 ranking in the championship guaranteed Villopoto a provisional for the night show and he was able to transfer into the Main Event through the Semi. After starting second in the Main Event, Villopoto dropped to as far back as eighth but made a late charge to move into sixth and lose minimal ground in the championship.

“We made the best of a bad scenario [today],” said Villopoto. “I woke up in a lot of pain this morning and the Asterisk Mobile Medical Crew thought it was best I [go to the hospital] to get checked out. I got out of the hospital and was lucky to make it in time for the night show. We salvaged a lot of points and I’ll go to the doctor back [home] in California to make sure we’re ready for St. Louis next weekend.”

Bogle began the 15-lap Eastern Regional 250SX Class Main Event by racing to the Nuclear Cowboyz Holeshot Award, edging out Monster Energy/Pro Circuit/Kawasaki’s Adam Cianciarulo. Bogle set a torrid pace out front in the opening laps while Cianciarulo attempted to keep pace. Earlier in the afternoon during practice, Cianciarulo’s left shoulder popped out of its socket while going through the whoops, and while running second behind Bogle on Lap 3 it occurred again as he navigated the same set whoops. After receiving medical attention, the 250SX Eastern Regional points leader and three-time winner this season attempted to re-enter the race, but ultimately pulled off and recorded a DNF.

While Bogle continued to pull away out front, Monster Energy/Pro Circuit/Kawasaki’s Martin Davalos had moved into second after starting fifth. Davalos was slowly closing the gap but went down on Lap 9, dropping to third behind JAB Motorsports Kawasaki’s Matt Lemoine. One the following lap, Davalos reclaimed the position while Lemoine fell into the clutches of Monster Energy/Pro Circuit/Kawasaki’s Blake Baggett. Baggett looked to get alongside Lemoine for third, but lost control and crashed out of the race.

Bogle became the 94th different rider to win a 250SX Class Main Event, doing so one day before his 21st birthday.

“I finally got a good start, which made [racing for the win] a lot easier,” said Bogle, who led all 15 laps. “It’s crazy. I crossed the finish line and I didn’t even know what to do. I’ve thought so much about what I’d do when I got my first win, but I don’t know. I just turned the corner [after the finish] and dropped my bike. I’m just so overwhelmed right now.”

“The track got really tough and I ended up making a mistake about halfway through,” said Davalos. “Luckily we were able to recover and still get a good finish, so I’ll take it. We gained a lot of points tonight, but there’s still a lot of racing left this season.”

Davalos overcame a 17-point deficit coming into Saturday to leave Toronto with a four-point lead over Cianciarulo with three races remaining in the 250SX Eastern Regional Championship. 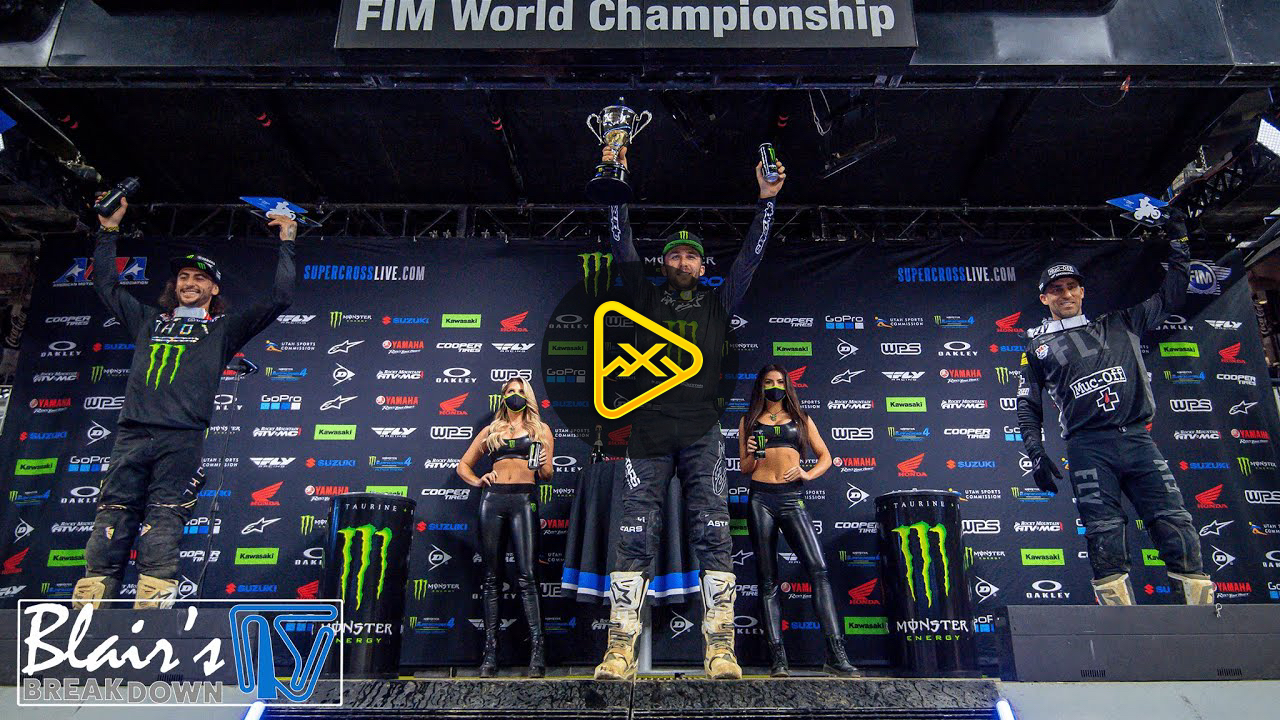