Irvine, Calif. (March 24, 2014) – Monster Energy Supercross traveled across the Northern border to Toronto, Ontario, Canada on Saturday where the racing was anything but cold. Monster Energy/Pro Circuit/Kawasaki’s Martin Davalos raced to his fourth podium finish, placing second and inheriting the points lead in the 250SX East as Blake Baggett and Adam Cianciarulo finished 20th and 22nd respectively following misfortune in the main event. Kawasaki rider Matt Lemoine had a standout ride at the Rogers Centre by winning his heat race and scoring his first career podium in third place. Monster Energy Kawasaki’s Ryan Villopoto overcame food poisoning that saw him visit the hospital but finish a hard-earned sixth place to keep a 25 point lead, while Dean Wilson captured a career-high eighth place finish in his final race on the Discount Tire/TwoTwo Motorsports KX™450F. 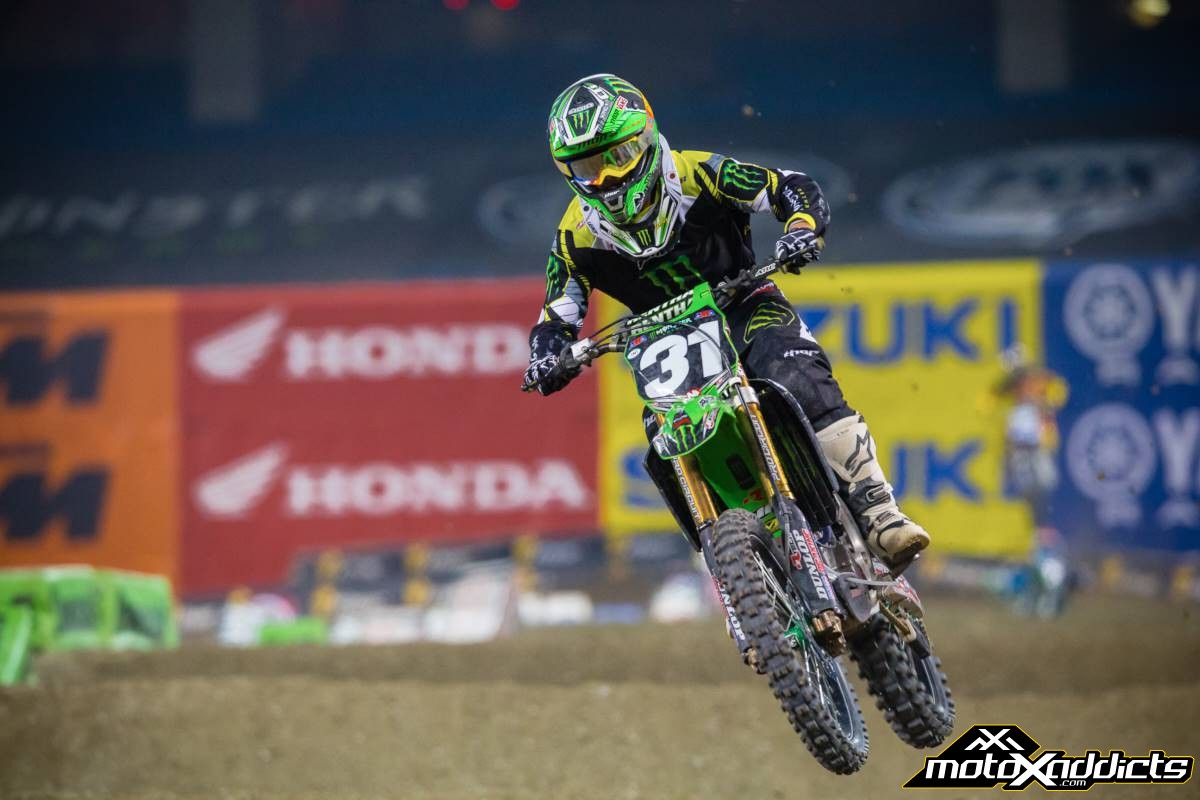 Week In, Week Out

Davalos continued his impressive Eastern Regional campaign in Toronto as he captured another pole position as fastest qualifier and remains undefeated in heat races this season. The Ecuadorian started up front on his KX™250F and was ready to challenge for the lead until a slight tip-over cost him some time on the leader, leaving him with second place. Davalos’ consistency allowed him to overtake his teammate in the points standings and now holds the red plates and a four point lead.

“We should have had the win tonight,” said Davalos. “I felt really good all day and my bike was perfect. Had I not had that little crash I think I could have reeled him in, but congrats to Bogle on his first win. I’m excited to run the red No.31 plates next week in St. Louis.” 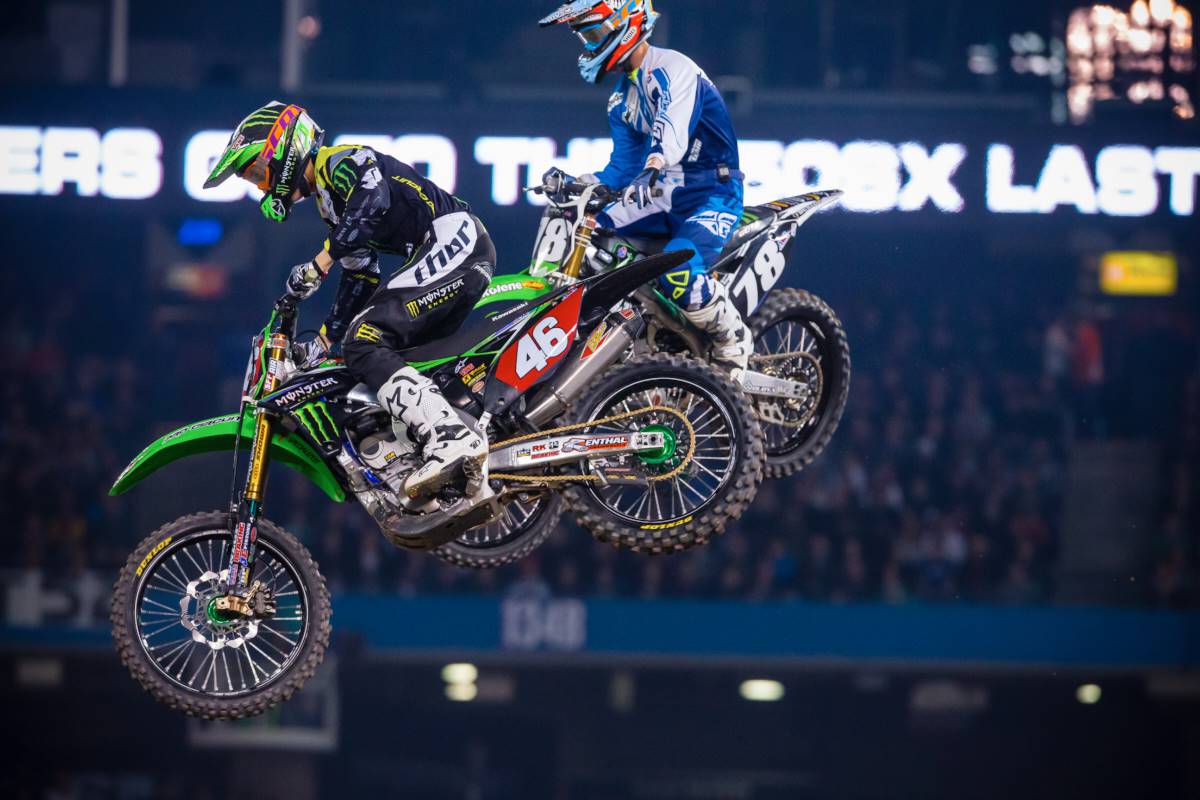 Lemoine captured his first heat race win inside the Rogers Centre back in 2008 which he backed up with another heat race win on Saturday giving Kawasaki a heat race sweep in the 250SX class. The former Team Green rider got off to a great start in the main event and ran an impressive 15-laps to gap the field on route to his first career podium finish in third place.

“It feels good to have all the hard work pay off,” said Lemoine. “I’ve felt great this year and tonight I finally got a start. We’ve been working really hard during the week and I wouldn’t be here without my Dad and team.” 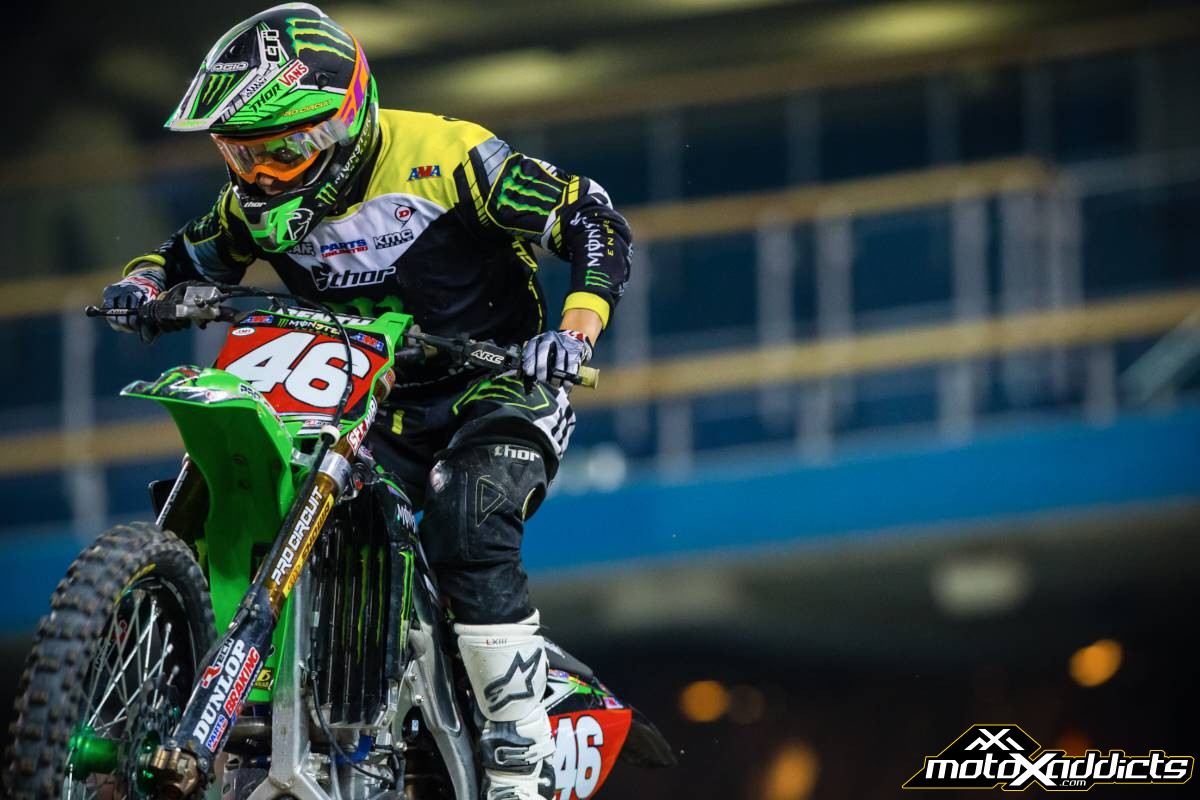 Cianciarulo’s first trip to Canada was one he would like to forget, as he was unable to complete the main event due to an injury he sustained during qualifying. The rookie suffered a crash in the whoops, which didn’t seem to faze him until he came around one lap later and his shoulder got jarred out of place. He had injured the same shoulder as an amateur so he knew immediately how to treat the issue. He qualified through his heat race, but three laps into the main event, his shoulder came out once again. Still determined to attempt to score some points, Cianciarulo had it put back in again and continued to ride until the pain was too much to withstand. He now sits in second place in the standings just four back from Davalos.

“It’s unfortunate,” said Cianciarulo. “I’ve injured this shoulder in the past so I know what I need to do to strengthen it and we will do everything we can and will be ready for St. Louis.” 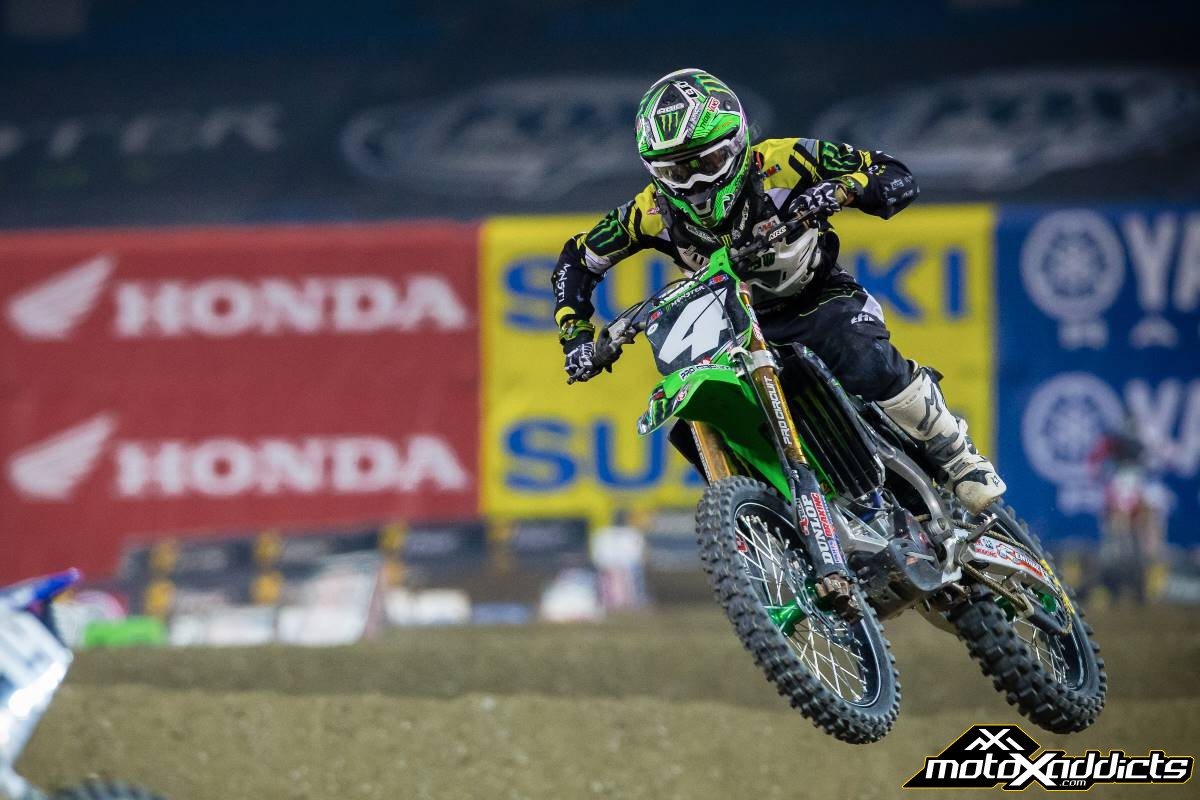 Baggett’s main event started off on the wrong foot from the very first lap. After getting a mid-pack start, he was moving forward through the field and made contact with another rider over the big triple, tearing the return cable off the throttle. Baggett was able to adjust and continue moving forward and was closing in on a podium position until he got cross-rutted and went down. His bike collected another rider and the collision finished off the throttle, completely ripping it off making it impossible for him to continue.

“I shouldn’t have been back in the pack to begin with,” said Baggett. “I’ve shown I have the speed to be up front but with a mid pack start you put yourself at risk of something happening out of your control. We’ll focus on next week and look to bounce in St. Louis.” 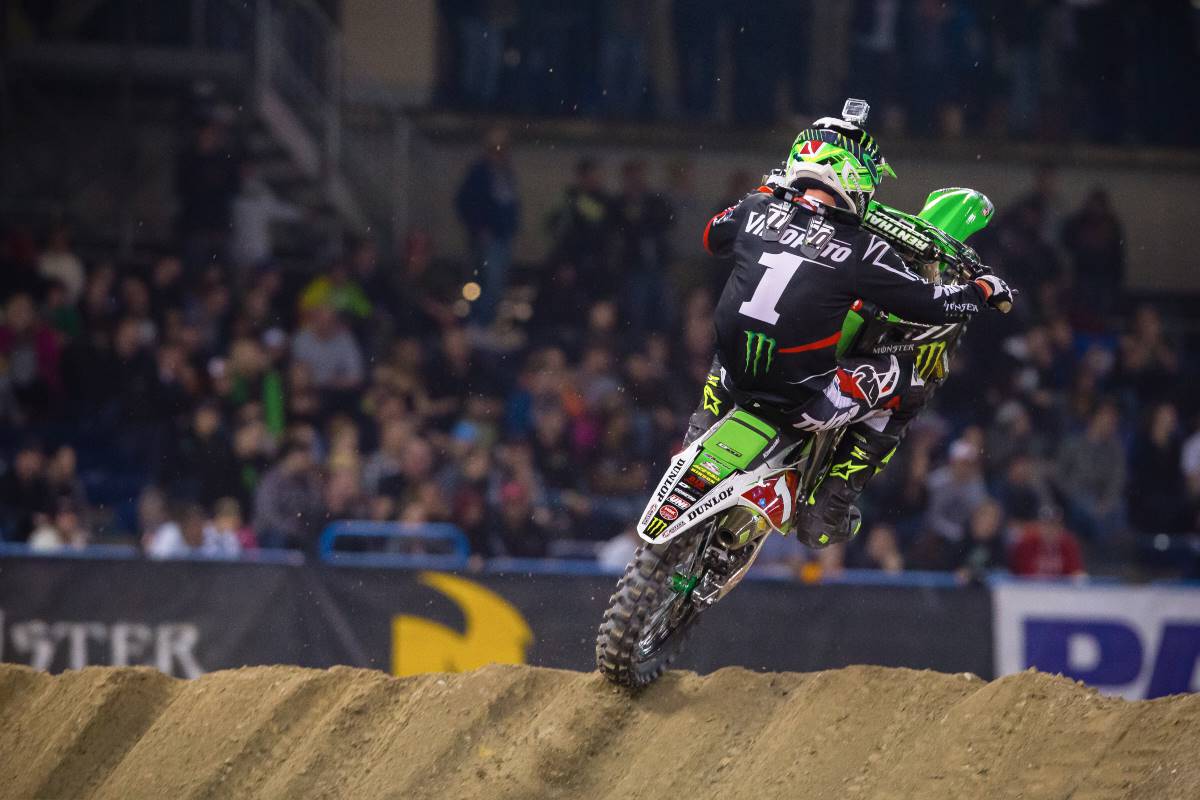 Villopoto woke up Saturday morning with a minor discomfort in his stomach that progressively turned into unbearable intestinal pain. Unable to keep anything down, the champ was advised by the Asterisk Medical Team to visit the hospital for treatment of food poisoning and rule out anything long term. After spending the day getting tests done, Villopoto returned to the stadium with just enough time to get dressed and ride out for opening ceremonies. Having not even walked the track, he was able to take advantage of a provision that allows a rider in the top-10 in points to line up with the last gate pick for first heat race. RV used the heat race as a practice session and was able to then transfer to the main event via the semi. In the main event he rode conservative and finished a hard-earned sixth place, losing only five points in the championship hunt.

“Lining up for the heat race I wasn’t even sure if I could push it at all,” said Villopoto. “I just tried to get the track down as quick as possible and in the main event I got a decent start and just rode within my means and salvaged a ton of points.” 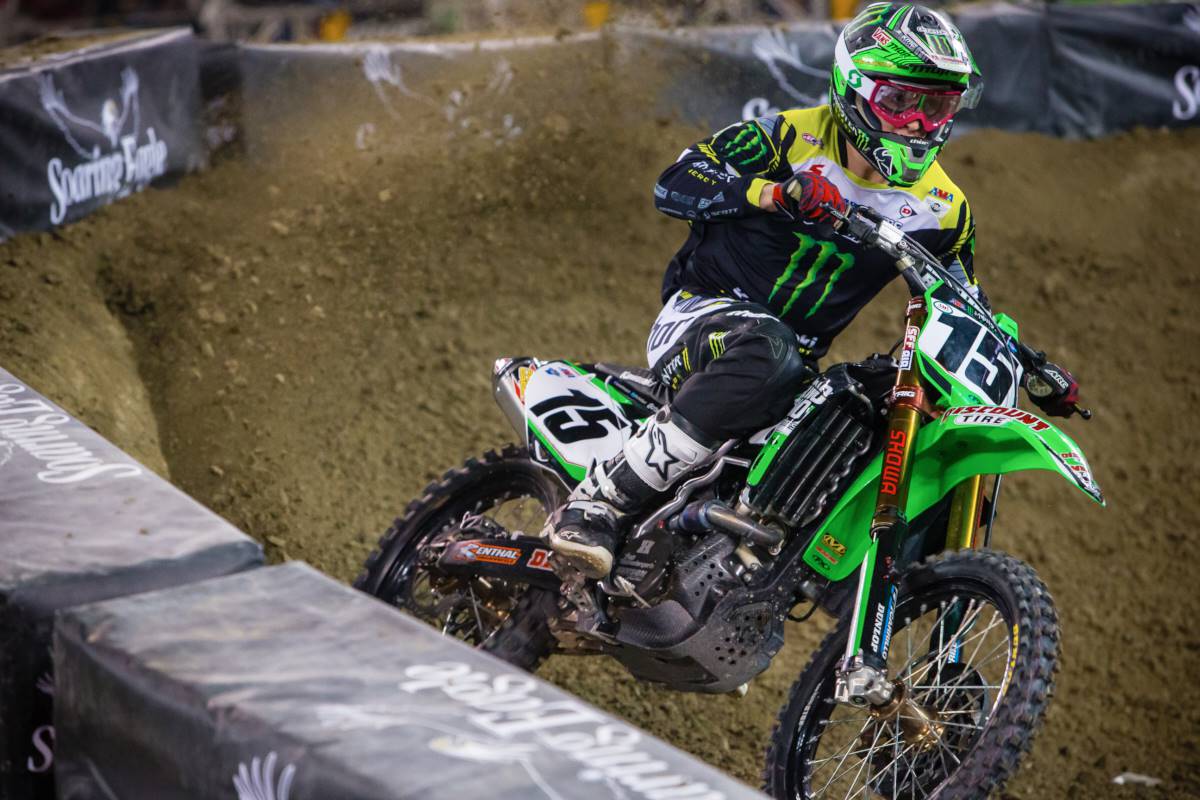 Finishing on a High Note

Wilson wanted to come to Canada, a place he once called home, and finish off his tenure with TwoTwo Motorsports strong. For the third consecutive week he traded the fast time during qualifying showing promise for the future when he makes the jump to the 450 class fulltime. Wilson got out front in his heat and was on pace to get his second heat race win until he cross-rutted in one of the tricky rhythm sections one corner from the checkered flag, crashing and settling for second. In the main event he started and battled within the top-10 for the full 20 laps and finished a career best eighth place in the 450SX class. Wilson will take next weekend off and return to his Monster Energy/Pro Circuit/Kawasaki KX250F and prepare the return of the Western Regional series in Houston.

“It’s been a great experience with TwoTwo Motorsports,” said Wilson. “Chad has taught me a lot these past few weeks and I’m particularly happy with tonight. I have a lot of fans in Canada and really wanted the heat race win for them but just got kicked weird and went down. I’m excited to take what I’ve learned with Chad and apply it to the 250 class.”

With Cianciarulo and Baggett only scoring one point each in Toronto, the East red plates will change hands for the first time this season, but still remain under the Pro Circuit tent. Davalos may only have one win, but his worst finish is only a sixth place in Detroit and he heads to St. Louis with a four point gap over AC. Baggett dropped to fourth place but is still within one race back of Davalos. The Edward Jones Dome in St. Louis, Missouri will host Round 13 on Saturday, March 30th. 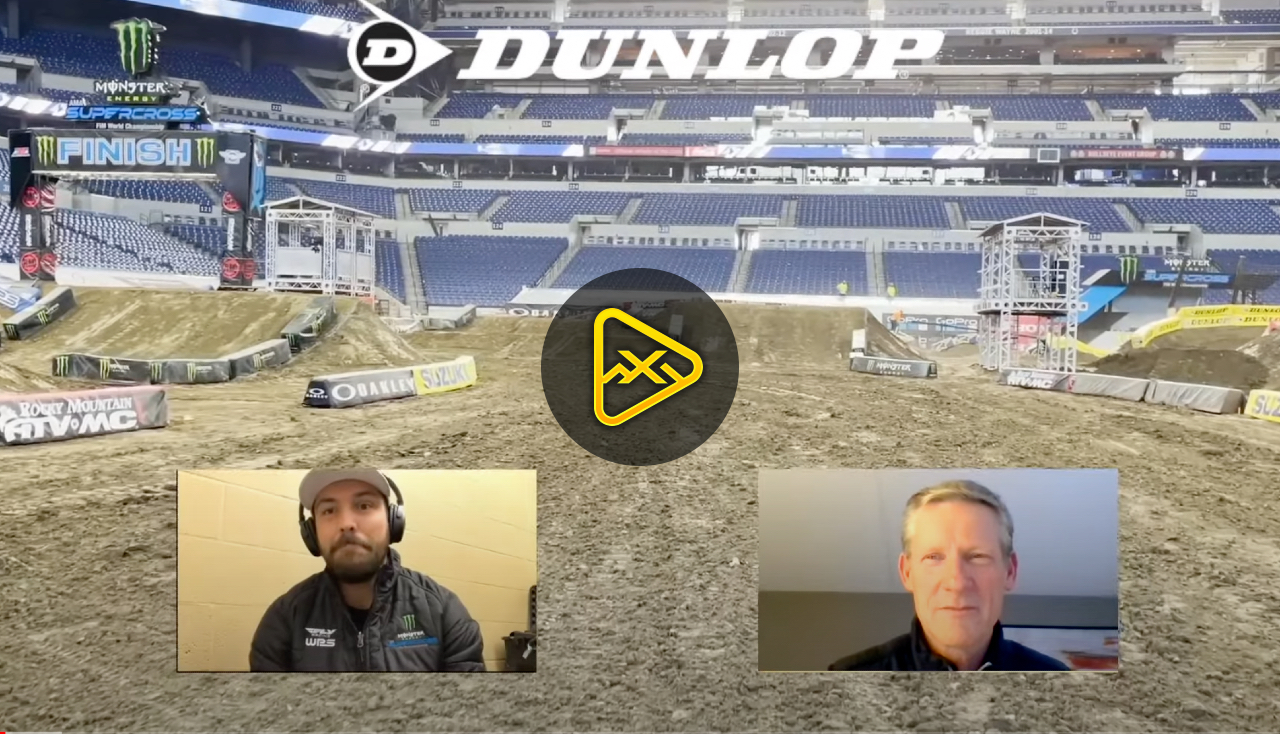 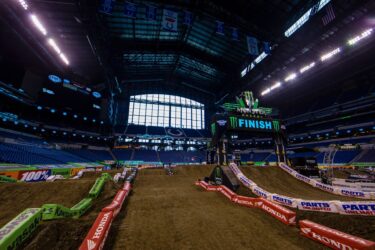