Coldenhoff was one of four riders that may have ended their 2014 season today.

It was a rough day for some of the top riders from the MXGP Motocross World Championship series. In one chaotic incident in Eersel, Holland, Max Nagl, Mike Kras and Todd Waters were all involved in a huge pile-up. We’re not sure how Max and Mike were involved in the crash, but Todd tweeted after the crash about coming over a blind jump and landing on the chaos. Todd tweeted, “Sorry to inform you guys about the bad news but today in training I come over a big jump and 4 guys had crashed. I landed on a bike. Broke my leg, collarbone and hip. Disappointing but team manager Antti and @gillburgess1 are the best support.”

As far as Max’s and Mike’s injuries go, we’re told Max may possibly have a broken wrist, but nothing has been reported on Mike, and Max’s wrist injury has not been confirmed yet. We will bring you confirmation on everyone as soon as we hear more. The pic below of Max’s mangled Factory HRC 450 was posted earlier. 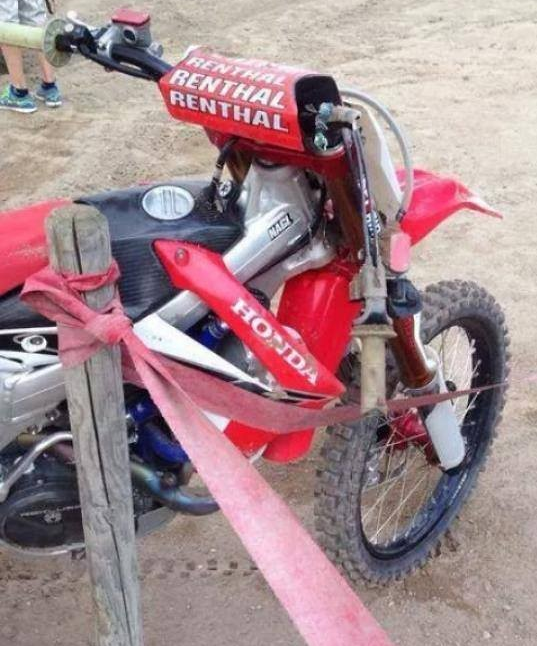 Also, at Honda Park in Belgium, Rockstar Suzuki’s top MX2 pilot, Glenn Coldenhoff, was dealt a serious blow to his 2014 MX2 World Championship hopes. The #259 was having a career year with a moto win, two podiums and sitting third in the Championship, but we’re now told we may not see Glenn again until 2015 in the MXGP class. The Dutchman crashed yesterday while training in Belgium, and reports indicate he has a lateral ligament tear and a broken bone in his lower leg. With the way Glenn was riding and the confidence he was putting in the bank, this injury could not come at a worse time. Hopefully he can carry this newfound momentum through his recovery and come back strong.