The Lucas Oil Pro Motocross Championship left California and headed to the foothills of the Rocky Mountains for the 2014 Toyota Thunder Valley National in Lakewood, Colorado. With the Thunder Valley facility carved out of the mountains one-mile above sea level, qualifying has always been as much about dialing in your engine package as it has been about setting the fastest lap, but since the invent of EFI, things have gotten easier. Even with EFI, the the thin air at that elevation will starve the rider and the bike of oxygen—making the 450f feel like a 350 and a 250f feel like a 200. So with that, getting comfortable with your bike and body being underpowered is important today. At times, the thin air has been known to boil gas as well, but with the temperature in the mid-sixties and possible thunder showers in the forecast, that will not be an issue today.

Over the first two rounds, it was the two Red Bull/KTMs of Ryan Dungey and Ken Roczen swapping the fastest 450MX qualifying times, while Valli/Yamaha’s Christophe Pourcel has monopolized the Oakley Bomb Award in the 250MX class so far. For the KTMs, those fast times have translated to swapping 1-2 finishes at the first two rounds, but for Pourcel, qualifying speed has not carried over into the motos—which is surprising considering that Pourcel laid down those fastest laps in the second sessions when the track was rougher at both rounds. 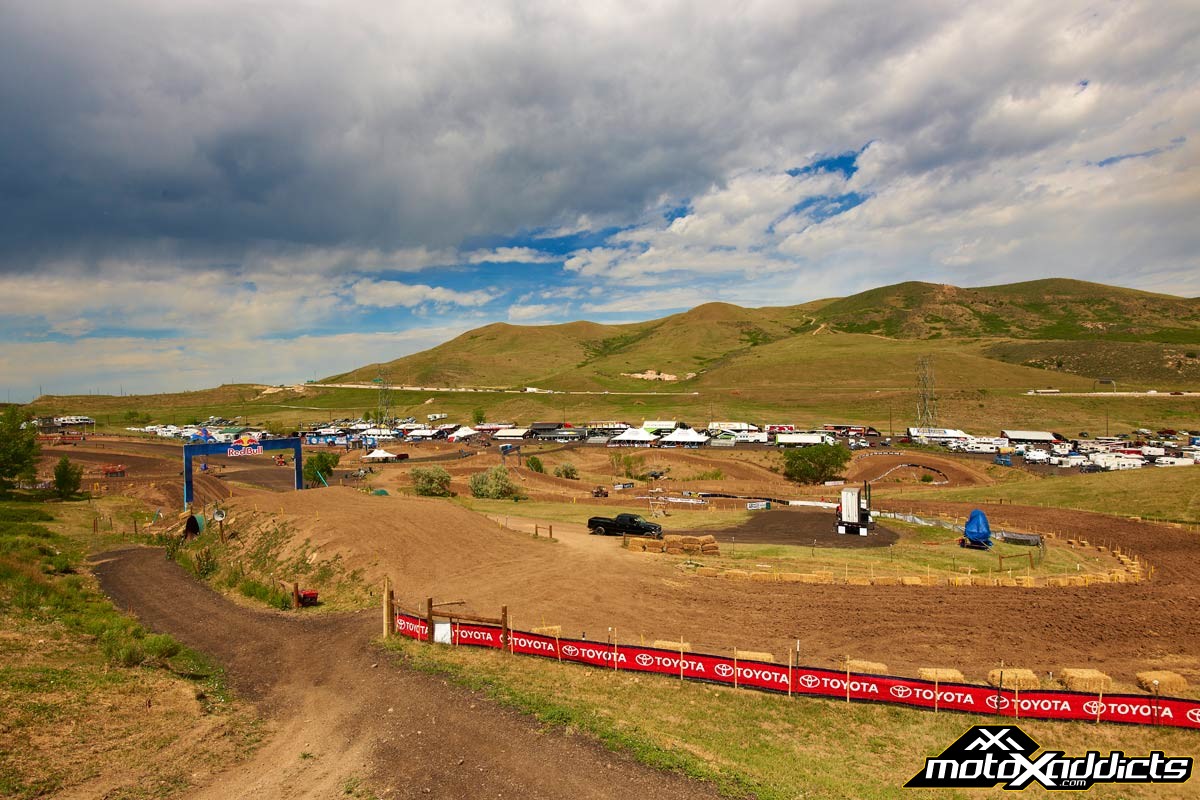 The Thunder Valley facility is a perfect facility for viewing world class motocross. Photo by: Hoppenworld

Today, Roczen returned to the top of the board in qualifying at Thunder Valley. Kenny threw up a 2:02.268 in the first session that was more than a half second faster than anyone. The closest man to the German was JGR/Yamaha’s Josh Grant with a 2:02.938. The #33 won a 450 National moto in Lakewood back in 2010, so it’s not surprising to see Grant showing speed at the facility.

Rounding out the top five in the first 450MX sessions was MuscleMilk/Honda’s Trey Canard (2:03.080), Dungey (2:03.100) and Yoshimura/Suzuki’s James Stewart (2:03.669). Stewart not having the fastest lap in a 2014 qualifying session is one of the bigger surprises of the season. While he’s not always the most consistent man in the world, he is usually at least the fastest man for a lap.

The only top 450MX rider to improve his qualifying time was the #41, Trey Canard. Not only was Trey’s 2:02.007 enough to improve his qualifying spot, it was also enough to win him his first Oakley Bomb Award of 2014. Trey has been steadily improving, and with the positive mojo attached to returning to the place where he won the MXoN with Team U.S.A., this could be the Oklahoman’s day. 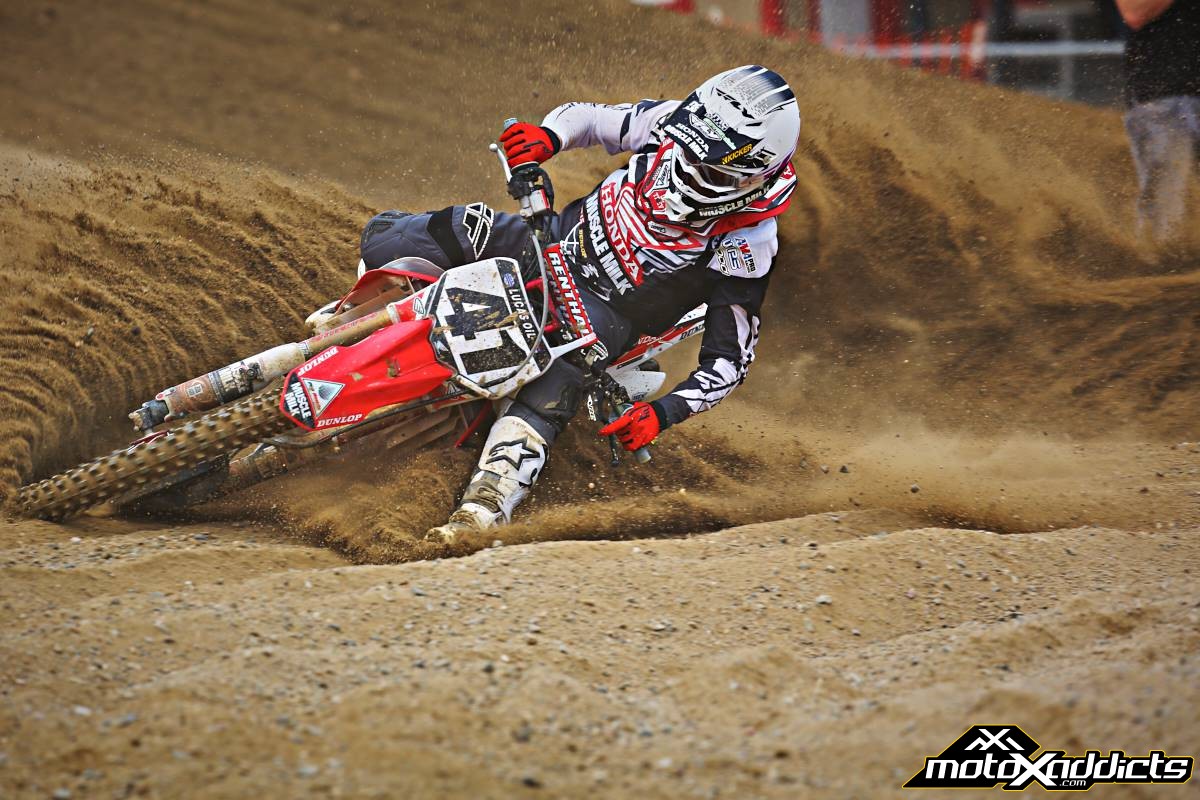 The biggest surprise for me in session one was Star Racing/Yamaha’s Cooper Webb (2:08.013) and Rockstar Energy Racing/KTM’s Jason Anderson (2:08.212) way down in 10th. Both have been frequently inside the top-five in qualifying and usually find their speed early, so it’s surprising to see them nearly four seconds off of Bell’s time.

In the final 250MX qualifying session, Pourcel kept his perfect streak alive. For the third straight week the #377 pulled out the Oakley Bomb Award winning time (2:04,303) in the final session of the day and will go to the line first again in Thunder Valley. The big question now is, will today be the day his speed translates into a win? 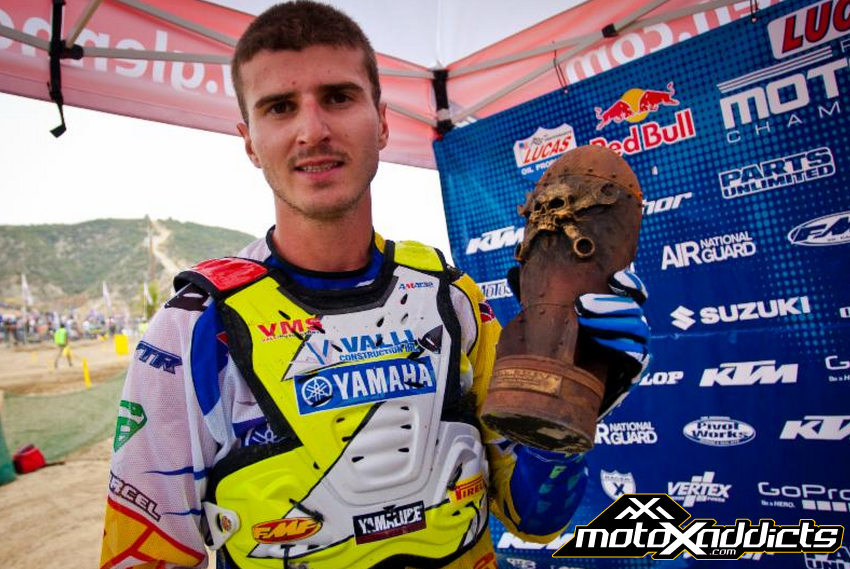 Pourcel is accumulating quite a few of these Oakley Bomb Awards. Photo: Courtesy of MXSports

Two other 250MX riders improved their times by quite a bit in the final session: Jason Anderson (2:06.320) and Monster/Pro Circuit/Kawasaki’s Justin Hill (2:05.182). Anderson moved up to 6th overall heading into the motos, while Hill jumped all the way up to 3rd.

Pourcel’s fastest time just edged out Bell who scored a 2:04.480 in session one for second overall. Bell’s speed has been impressive, and with his top-five in moto one at Hangtown, it’s starting to look like his fitness will soon catch up with his speed.

The biggest surprise was Webb. Webb, who scored his first ever moto podium last year at Thunder Valley seems, to love the circuit, so it’s a bit surprising how badly he struggled today. Webb was 9th in session one and 15th in session two with a time of 2:08.398 being four seconds off of Pourcel’s time. Webb will go to the line in moto one with the 13th overall pic.

Check out the top 10 in each class, combined overall top-40 and consolation race results below, and all the official 2014 Thunder Valley Natiional qualifying time sheets by clicking here>>>

Click Time Sheets to View in Slideshow
*Top 36 go directly to motos. Everyone else to consolation race. 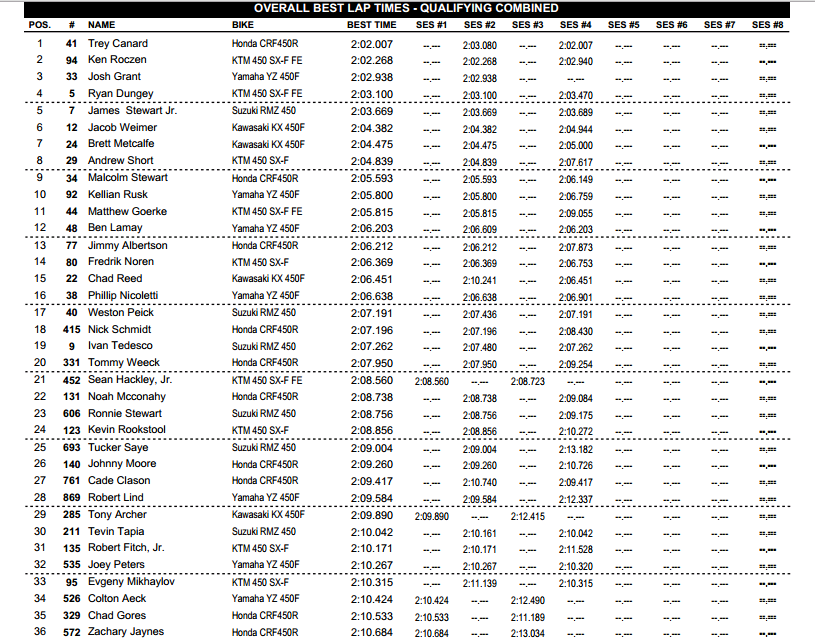 Click Time Sheets to View in Slideshow
*Top 36 go directly to motos. Everyone else to consolation race. 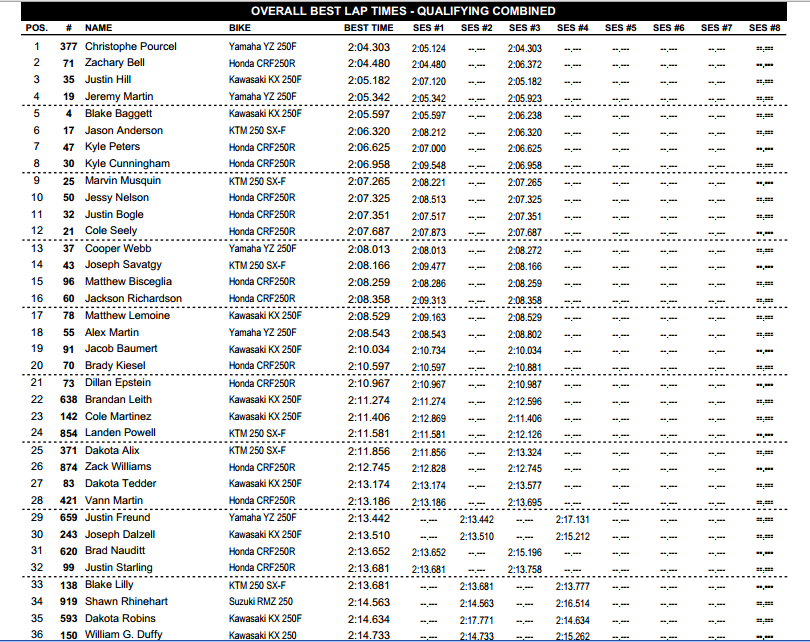 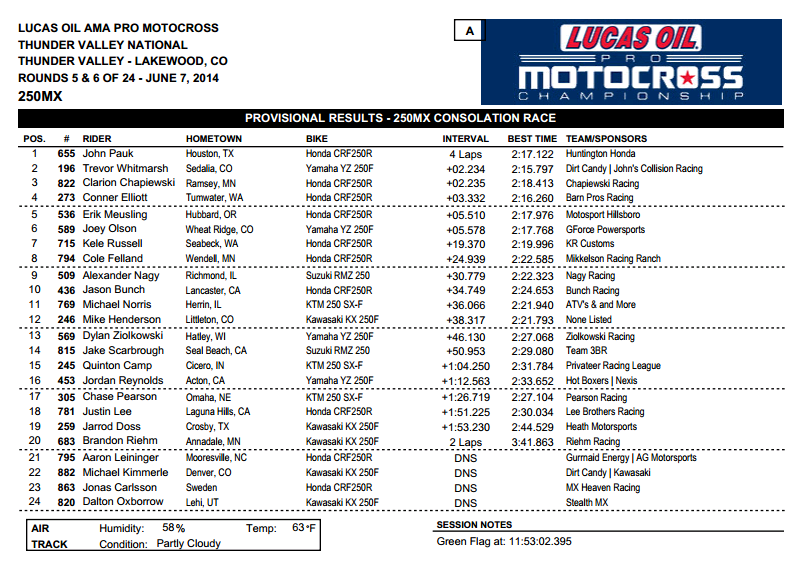 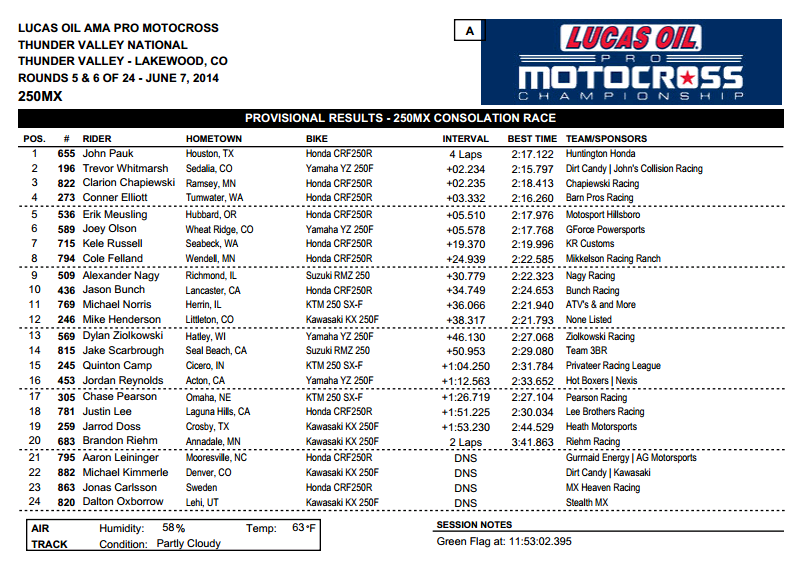 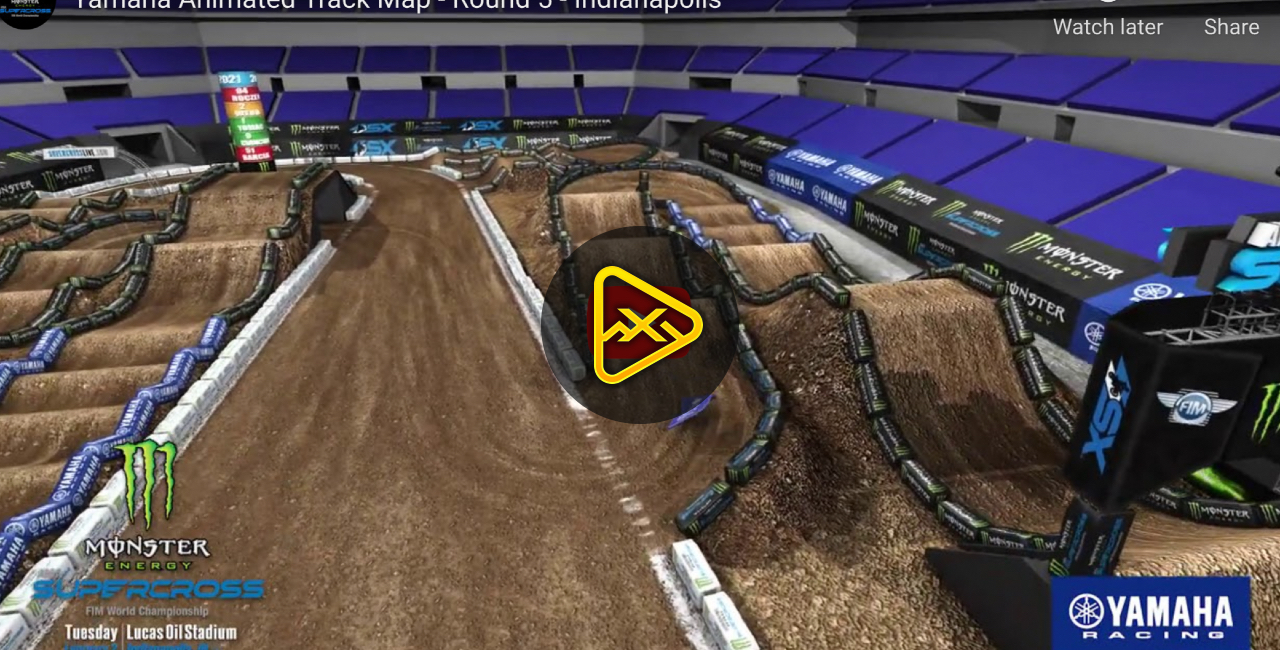