Heading into the 250SX Western Regional Championship of the 2015 Monster Energy Supercross season I think everyone knew that Star Racing/Yamaha’s Cooper Webb would be good, but not many saw this coming. Cooper started the year off with a lackluster 7th place finish at the opener in Anaheim, but since then he has been head and shoulders above the rest of the class. The #17 won his first-ever main event at round two in Phoenix, backed that up with a win at Anaheim 2 and, despite a bad start and a crash, was able to slice through the field for a second place finish in the Oakland SX main event.

With four rounds now in the books, Cooper will bring all that momentum and an eight point lead in the 250SX Western Regional Championship over Tyler Bowers into the final two rounds before the series takes an eight week break to head east. Tyler and Cooper are not only the top two in the Championship, they’re training partners and now it looks like former friends. I say former friends due to the recent get togethers the two have had in ontrack battling for this Championship. At A2, Webb took Bowers off the track on the last lap for the win, and this week in Oakland, Bowers hit Webb hard enough to take the red plate holder to the ground. With that, Webb was vocal about opinion of Bowers’ move on the Oakland podium. 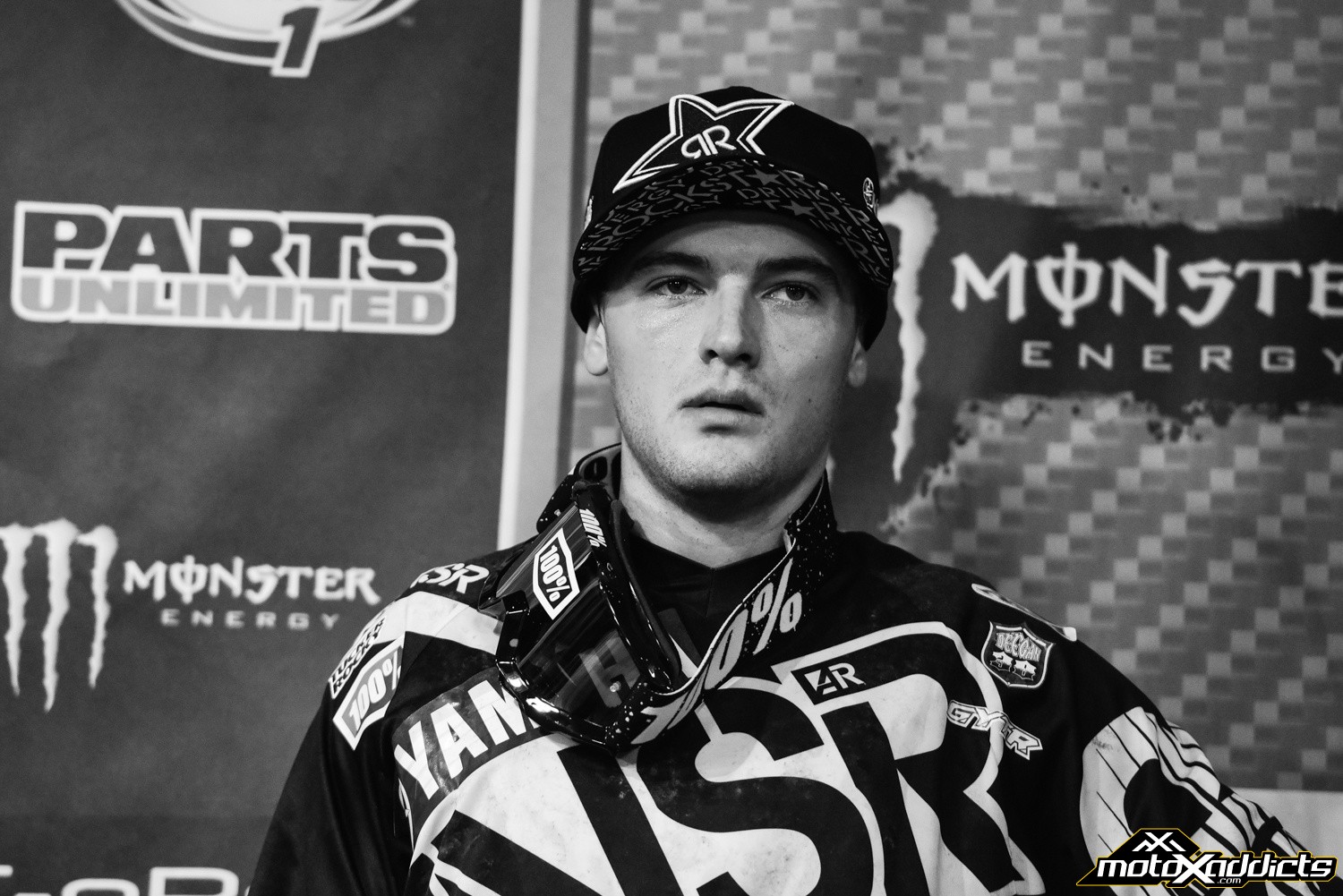 Cooper is becoming a regular on the podium in the west. Photo by: Todd Gutierrez

After the main event in Oakland, we caught up with Cooper to talk to him about the Oakland SX and about his run in with Tyler in the main event. You can read what Cooper had to say after the race below, and check back with MotoXAddicts tomorrow to hear a candid interview with Bowers.

Man, Cooper, what are you eating these days? That was a hell of a ride my friend.

Yeah, it was. I thought it was a good ride. I didn’t get off to the greatest of starts, but I made my way through the pack. I was trying to pass [Zach] Bell for 2nd or 3rd, and [Tyler] Bowers came in and pretty much wrecked me. It was a dirty move for sure. I just got up, put my head down and went for it. I think I’m pretty hungry to win this title. I wasn’t going to let anything like that get in my way so I put my head down and gave it to those guys I guess.

Are you at a point now with your confidence where you feel like you can go fast in any line? For example, that line you used around the outside to triple into the rhythm section was a line you had not used all day, but used it to pass Alex Martin with no problem.

Yeah, I think I’ve matured and come together as a better rider. Our bikes are obviously unreal, I’m in great shape, I think I’m really in tune with that bike, and I’ve been working really hard. I think that’s the main thing. This whole off season, to win was our goal. When you’re this focused on winning, I think it’s hard not to get good results. 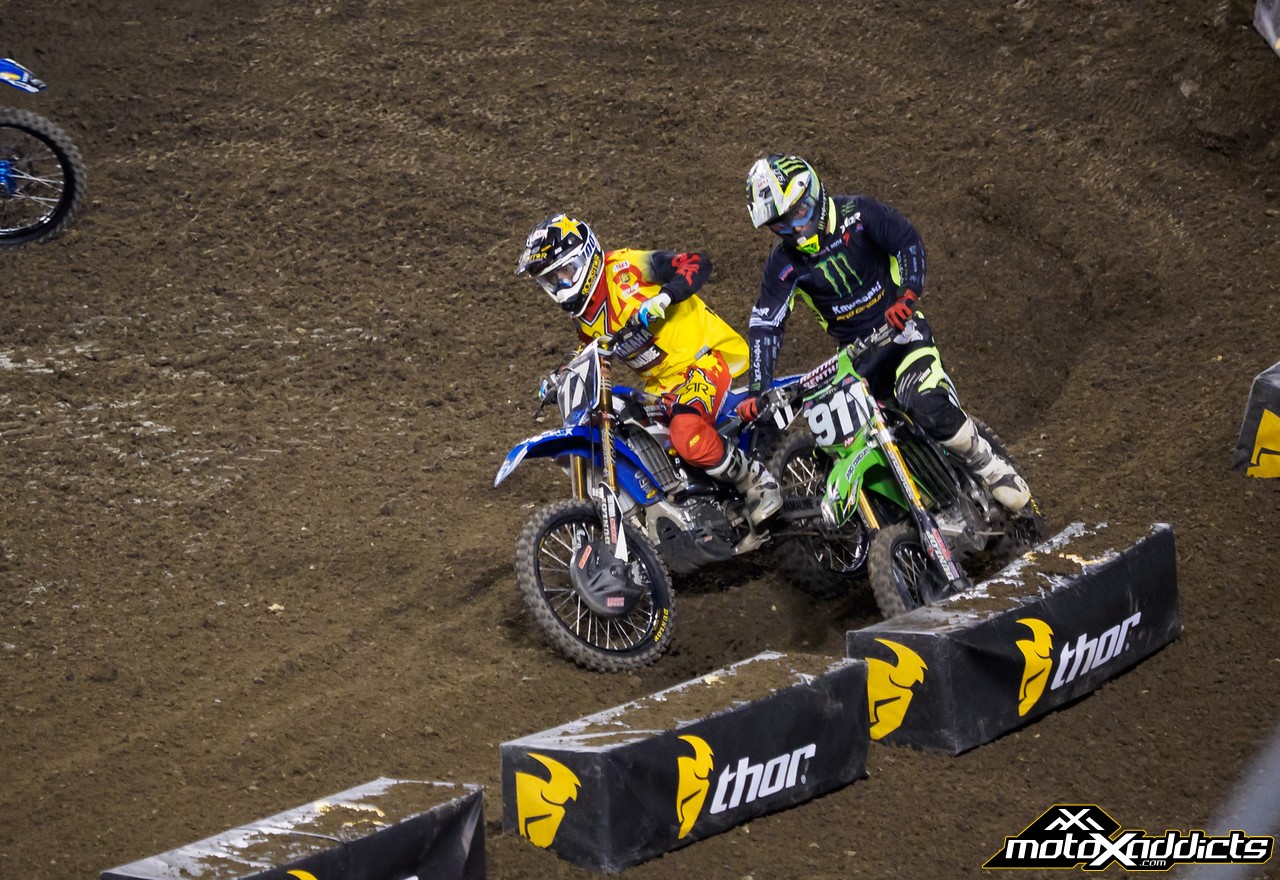 Webb has gotten the better of the new Webb-Bowers rivalry so far. Photo by: Mark lester

After Bowers hit you early in the race, you obviously got a chance at him later in the main to possibly throw a little payback his way, but you instead passed him pretty clean. Was there a little piece of you that wanted to do a little payback?

No, I knew I didn’t have any time to mess with him. Like I said, I’m going for wins, and at that point, I still thought I could win. I just kind of made the pass and was gone. I knew I only had two laps and I was in fourth. Second was obviously a great ride for me after a bad start and a crash. It was awesome, but we work hard during the week and we want to get those wins.

You say you’re working hard during the weeks, but is there anything you’re doing differently than last year? Your fitness is on point and that shows when we see you going a second and a half faster than everyone at the end of the main.

No, I’m using the same trainer this year, Gareth Swanepoel. We just have a solid crew with us. My mechanic Eric keeps me on my toes and just the whole team—Steve Lamson. I mean everyone’s goal is to win. If they see something we need to work on, we’re working on it. 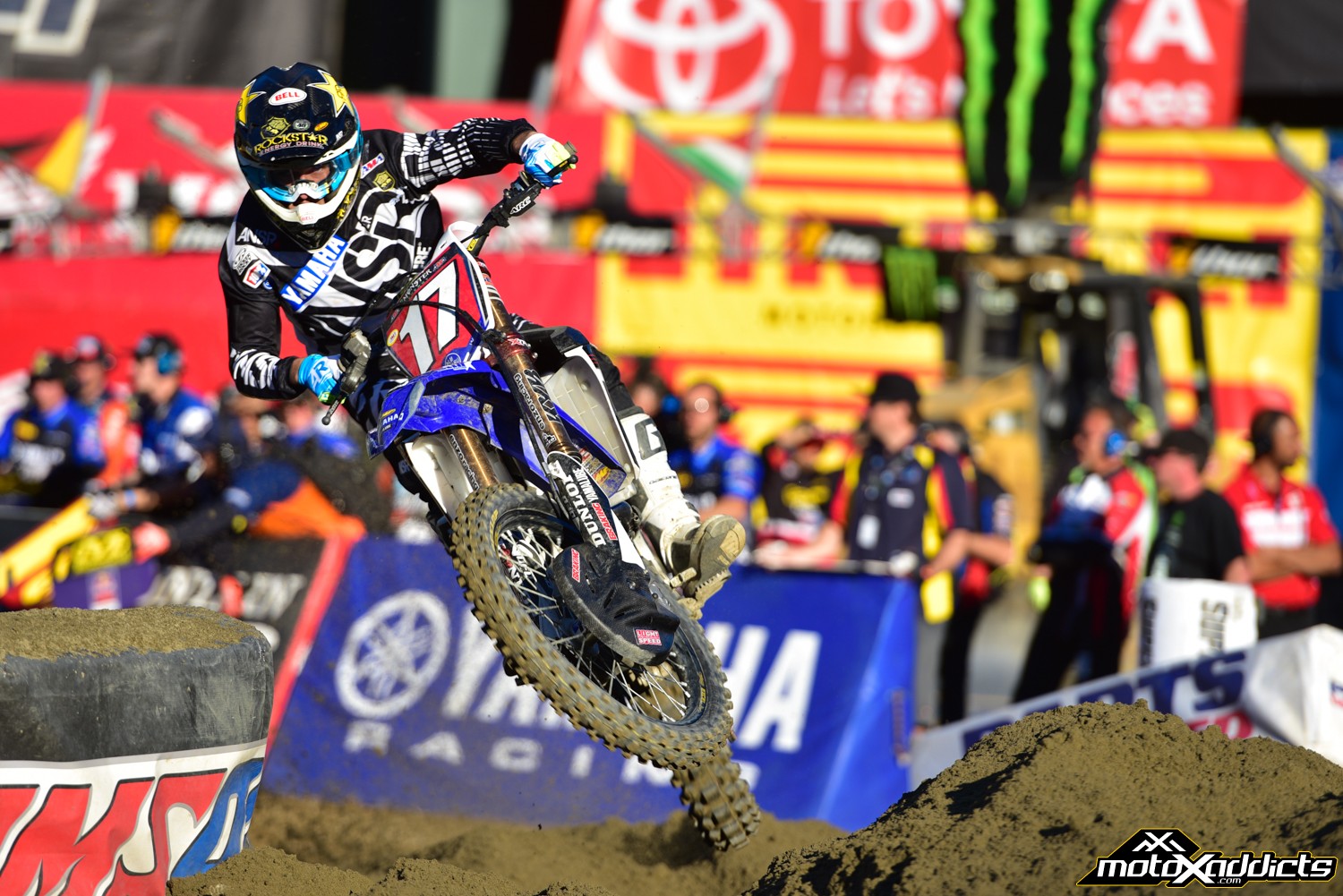 Alright, with your second place you still outscored the guys closest to you in the Championship and extended your lead in the points. What are your thoughts heading back for the third Anaheim of the year?

It’s nice. I live in California now so it’s a nice little drive there. I like the Anaheims. I do good at Anaheim, and it’s nice to extend that points lead a little bit. I’ll just go out there and try to win again. I had two in a row and I would have liked to make it three. No, it was still good. Malcolm [Stewart] got his first win which was cool to see because I grew up buddies with him. And [Alex] Martin on the Rock River Yamaha getting third. I think everybody was stoked on the podium. Nice racing.

Awesome ride, Cooper, and we’ll see you next Saturday. 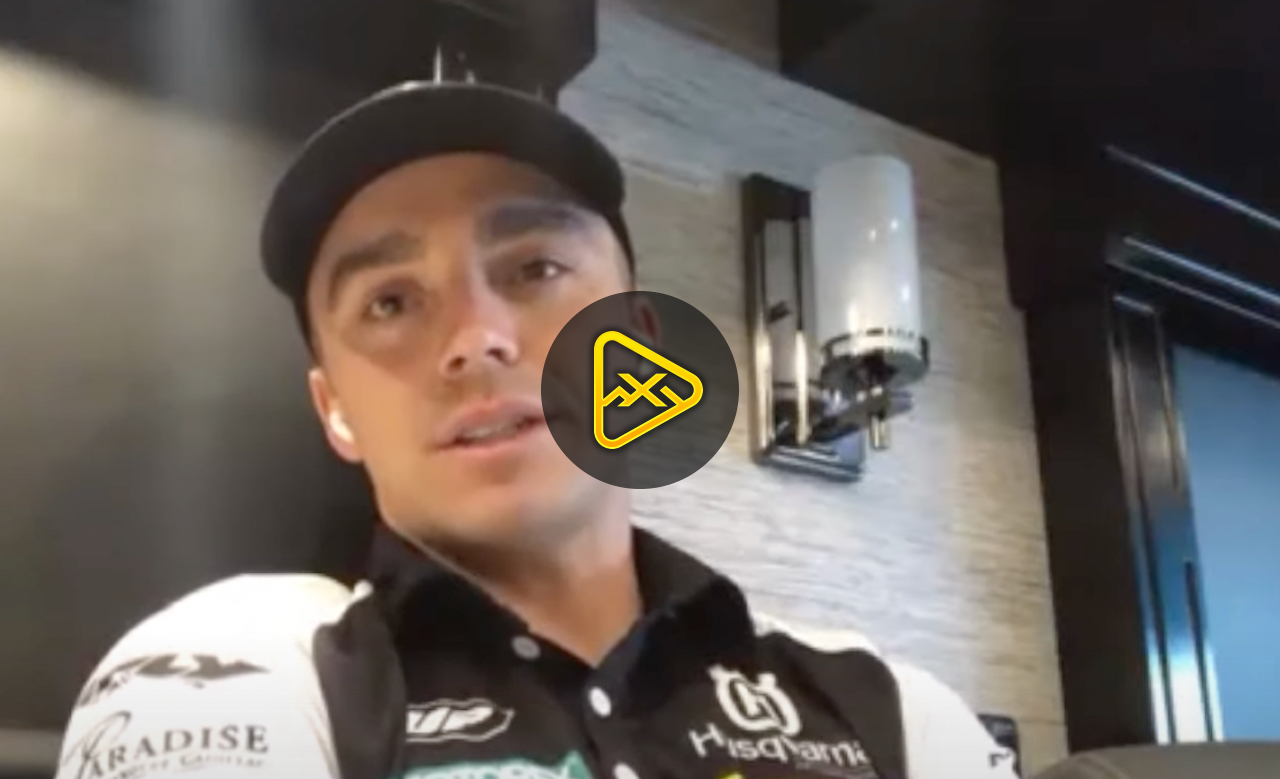 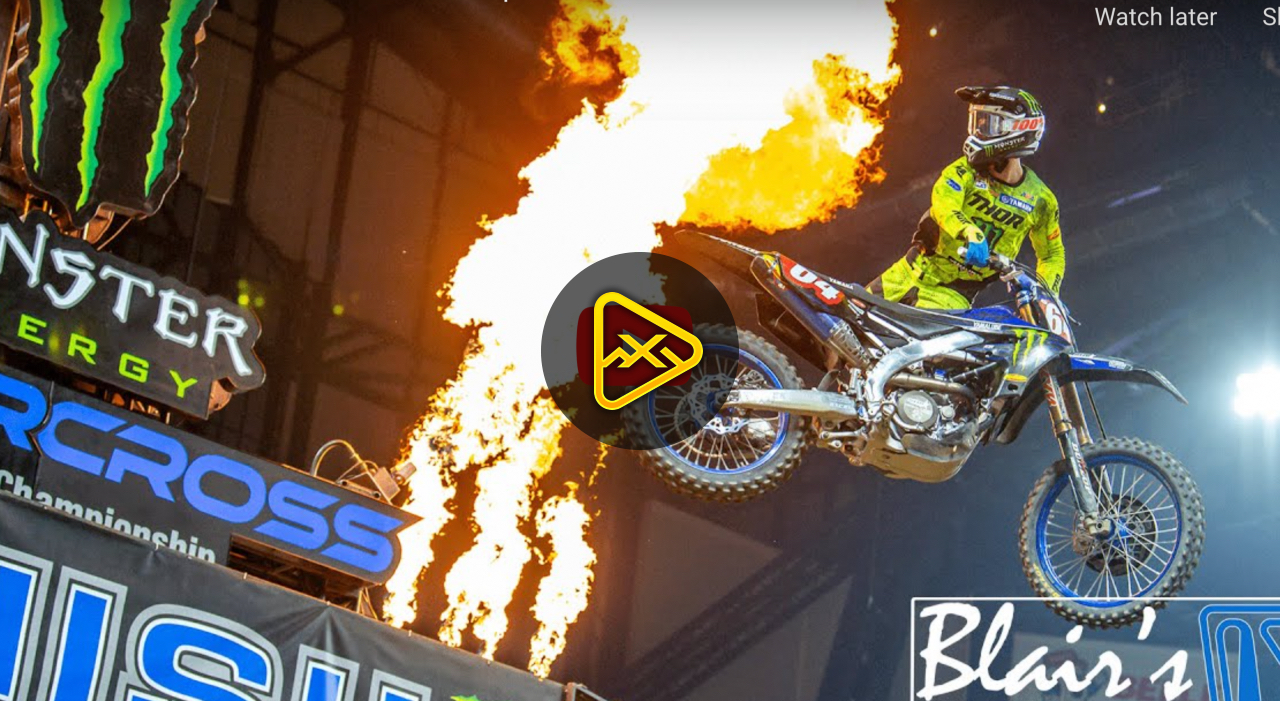 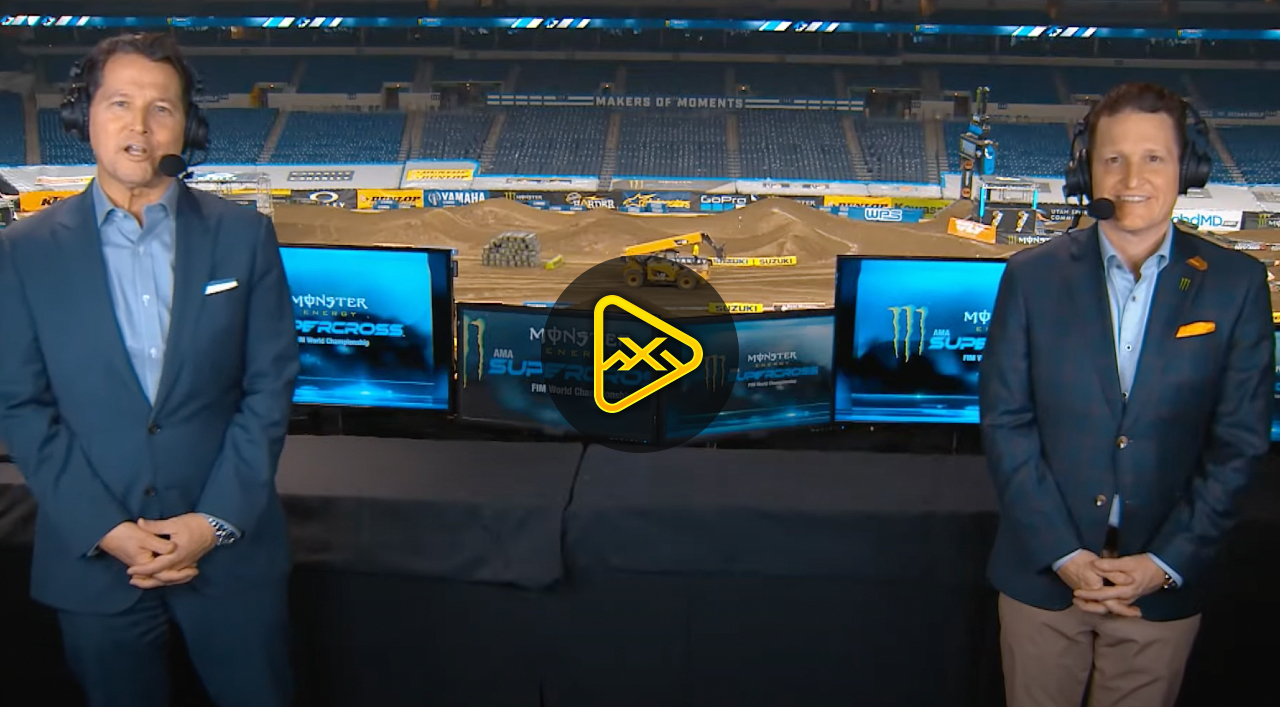