Russell, Sipes and More Set for Battle at 2015 Unadilla GNCC 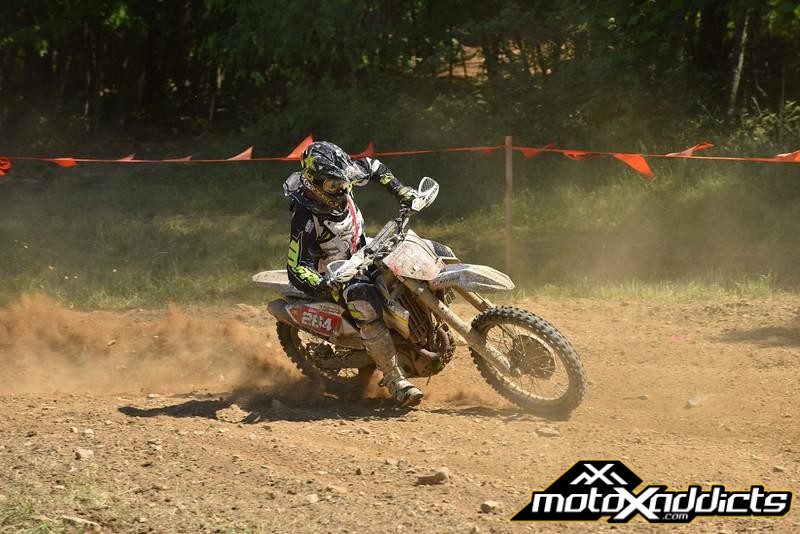 Ryan Sipes will be looking to earn his first GNCC win this weekend.Photo: Ken Hill

The 2015 AMSOIL Grand National Cross Country Series (GNCC) presented by Maxxis, an AMA National Championship, returns to action this weekend, September 19 and 20, following a three-month break over the summer. New York’s renowned Unadilla Valley Sports Center hosts round 10 of the 13-race series with the Parts Unlimited Unadilla GNCC. Factory FMF/KTM’s Kailub Russell heads into Round 10 with a commanding lead over the rest of the XC1 Pro class, but the competition has been working hard to break his momentum, while DirtWise/Maxxis/KLIM backed Jason Thomas leads the way in XC2 Pro Lites.

With a three-race winning streak, Russell holds a 104-point gap on second place in the National Championship standings. Russell recently competed in the International Six Days Enduro (ISDE) where he encountered a trivial injury to his knee, but comes into this round fully focused on competing. Russell, the 2013 and 2014 National Champion, will continue his bid for his third straight title in the XC1 Pro class but first, he must do battle against the world’s fastest off-road racers through some of the most grueling obstacles in the woods.

Perhaps the rider with the most momentum is AirGroup/Rockstar Energy/Husqvarna backed Ryan Sipes, who comes into this round fresh off becoming the first American to overall at the ISDE held in Slovakia last week. Sipes has been consistently improving his finishes throughout the season., Sipes currently holds the fifth place position in the championship standings, but heads to Unadilla with the confidence to grab his first-ever GNCC win. 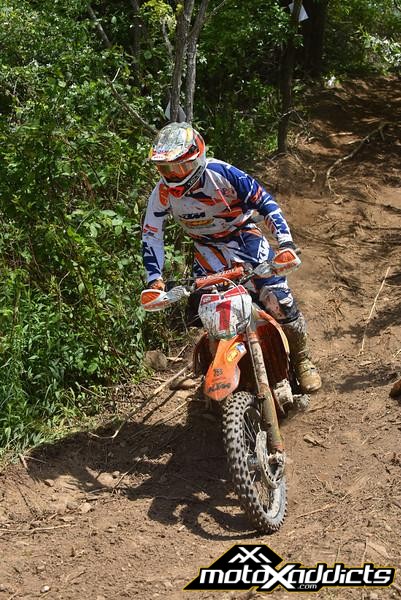 N-Fab AmPro Yamaha’s Grant Baylor continues his stand-out XC1 rookie season, proving that consistency is key as he finds himself in second place within the championship. The South Carolina native placed fourth overall at last year’s Unadilla GNCC while racing a 250 in the XC2 class, and looks to capitalize on his summer break training to claim his first overall GNCC win this weekend.

Coming off arguably the best ride of the year at Snowshoe, Rocky Mountain ATV/MC & KR4/FAR back rider Thad DuVall holds third place in the championship standings. DuVall has a slew of top five finishes behind him, and is a former race winner at Unadilla.

The GNCC Series visited New York earlier in the season, and JCR Honda’s Chris Bach got his first taste of winning this season by grabbing the victory. The Indiana native is the only person to stop Kailub Russell’s dominance this year, and will be looking to find himself on the center spot of the podium again. 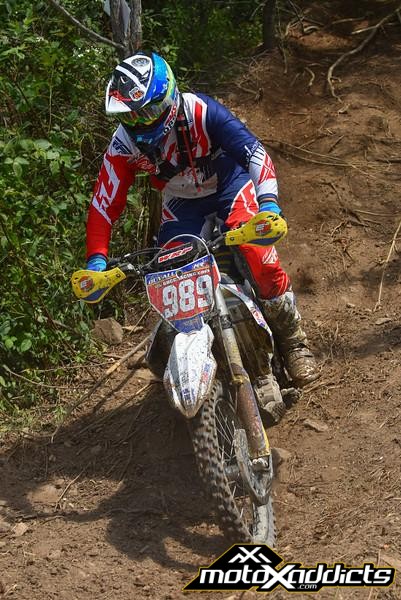 Thad DuVall holds third place in the championship, and is looking for another podium finish at Unadilla.Photo: Ken Hill

Earlier in the season, Rockstar Energy Husqvarna Factory Racing’s Josh Strang was proving to be Russell’s closest competitor, until a shoulder injury forced him to the sidelines for two races. The 2010 GNCC Champion is 100 percent ready to return this weekend. N-Fab AmPro Yamaha’s Jordan Ashburn comes next, sitting in seventh in the championship standings, right behind Strang.

DirtWise/Maxxis/KLIM’s Jason Thomas leads the XC2 Championship with a 64-point lead coming into the last four rounds of racing. Thomas is no stranger to the podium, and is looking to add another XC2 Championship to his records.

Husqvarna Support Team rider Craig Delong sits within a striking distance of Raines Riding University/Atlas Yamaha/OffRoadViking.com’s Ricky Russell for the second place spot in the XC2 Pro Lites Championship chase. Only three points separate second and third, but with the break over summer, Delong and Russell are expected to showcase some stiff competition between each other in the last four rounds. 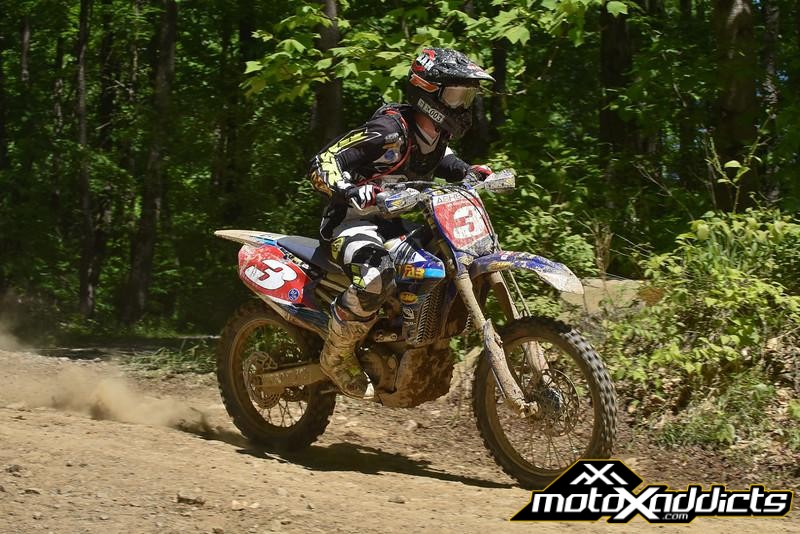 Youth bike racing will take place Sunday at 8 a.m., followed by amateurs and Women at 10 a.m., while the top amateurs and pros race at 1 p.m.

Spectator passes run $20 for adults and $10 for kids (6-11) for the full weekend (Saturday through Sunday), with pro pit access and pro autographs at no additional charge. Local riders are invited to race the event, as GNCC Racing offers classes for riders of all skill and experience levels. The amateur race entry fee is $40 and riders can sign up at the event. 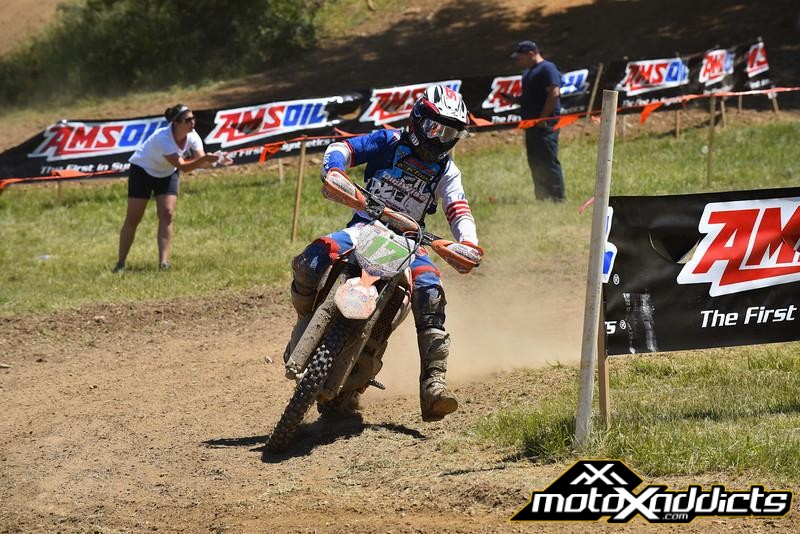 Jason Thomas leads the XC2 pack into round 10 this weekend in New York.Photo: Ken Hill

Tune into RacerTV.com on Sunday at 1 p.m. EST to catch LIVE coverage of the Pro Bike race at round ten. For more information on GNCC LIVE coverage, visits www.racertv.com. A highlight show featuring the event will air on NBC Sports Network on Sunday, November 29 at 1:30 p.m.

The 2015 AMSOIL Grand National Cross Country Series heads to New Berlin, New York this weekend, September 19 and 20, for the Parts Unlimited GNCC. For more information on the series, visit the official website at www.gnccracing.com or call (304) 284-0084. Also follow us on Facebook, Twitter and Instagram for exclusive content and to catch the latest news. 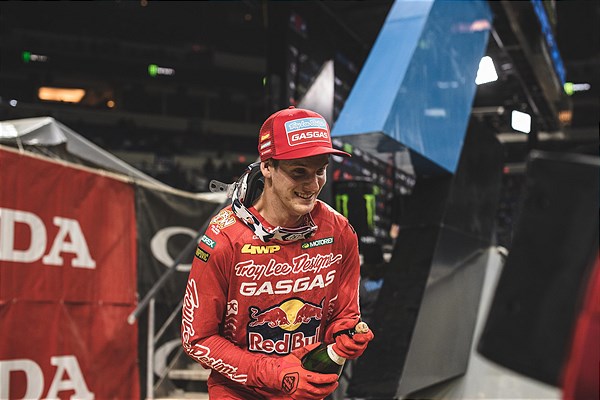