The young Frenchman’s style is something special to see in person. Photo by: Yamaha Racing

If ever there were a Cinderella story in World Championship Motocross, Monster Energy/Yamaha’s Romain Febvre is it. The young Frenchman finished third in the 2014 MX2 World Championship and moved up to the MXGP class with just one MX2 overall win on his resume—a win at MXGP of Brazil at the tail end of his MX2 career. While everyone knew the former Junior French Motocross standout, turned SuperMoto pilot, turned 2011 European Motocross Champion would be good on the 450, there are very few people on Earth that would have told you at the beginning of 2015 that the rookie would win the Gold Plate.

In a year that was hyped as the battle of the living legends–Ryan Villopoto versus Antonio Cairoli–the twenty-three-year-old rookie flew in under the radar, won eight GP’s and the World Championship. While I’d love to say we were the only website that thought the #461 had a chance, in our pre-season poll asking “who will be crowned 2015 MXGP World Champion”, he was not even one of the options you could vote for.

At last weekend’s USGP at Glen Helen, Romain capped off his dream season with an overall victory in his first-ever trip to California. While Americans were dominant in MX2–taking the top two podium spots–the newly crowned Champ refused to see that happen on his watch in MXGP. In moto one, Romain came from behind to catch and pass Cooper Webb with a lap and a half to go for for his fifteenth moto win of ’15, and he would back that up with another come-from-behind performance in moto two. The Champ ended up crashing in moto two with three laps to go while pressuring Josh Grant for the lead, but his 1-2 performance was enough to end his GP season with another overall win. Now he heads back to his home country to try and help France defend their 2014 MxoN title. 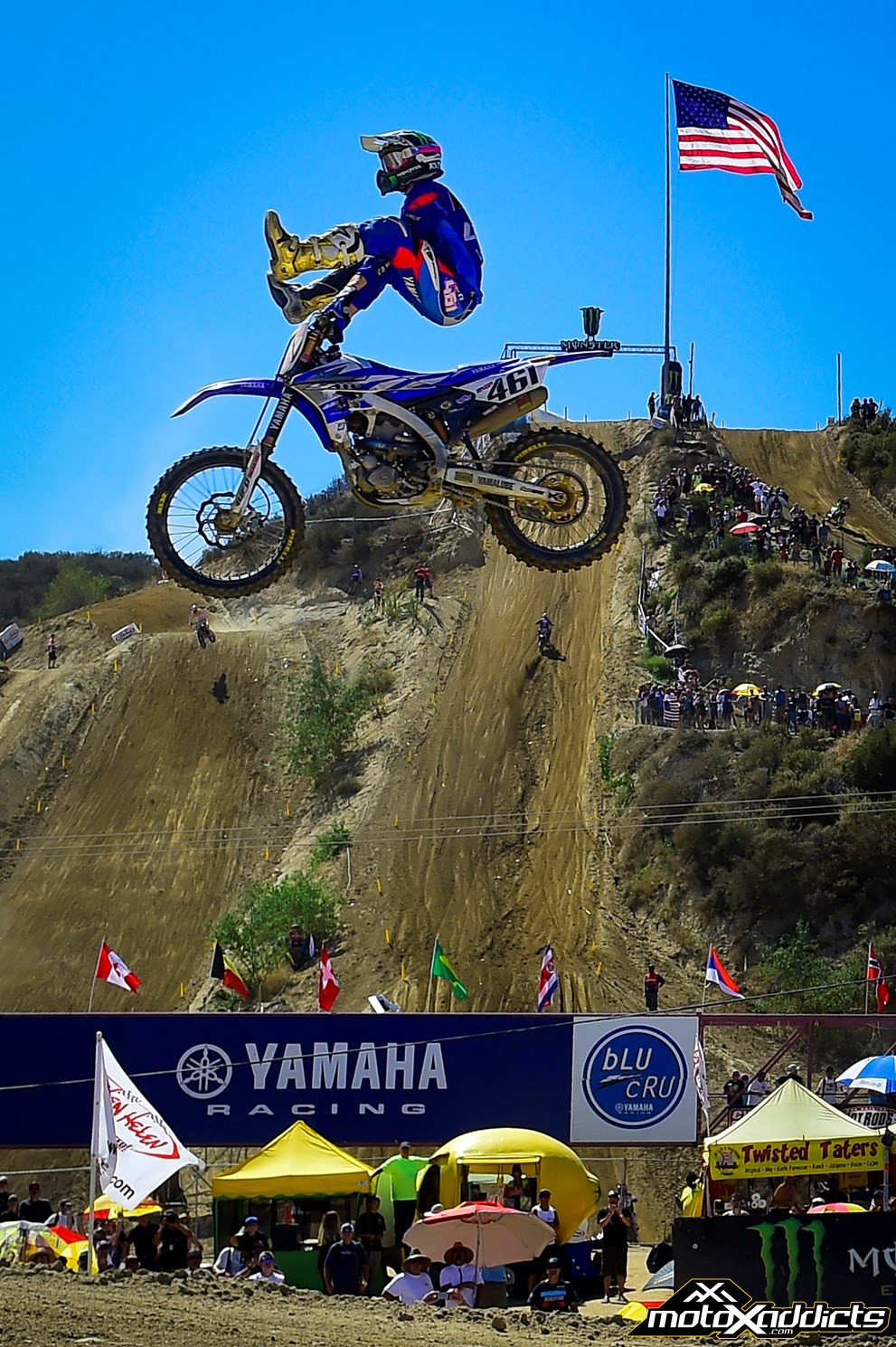 Like David Vuillemin and Marvin Musquin before him, Romain Febvre has continued the French heel-clicker win tradition. Photo by: Yamaha Racing

After the USGP was over, I caught up with the Champ in the Monster Energy/Yamaha pits for a quick interview. You can hear what he had to say below.

Yeah, I feel good. You know, I’ve never been to California, and to ride on this track yesterday [in qualifying] was pretty insane. It’s so fast, and the preparation of the track is really nice. You can just go wide open everywhere and that’s good. We just had to adapt the bike a little bit for that because we are not used to that. I managed to win the first moto, and in the second I finished a little bit short, finished second. I take the overall, so that’s, again, a good weekend.

What did you think of the hills at Glen Helen? I mean, by definition, motocross is bumps and jumps and hills, but these hills are pretty massive.

Yeah, it’s massive, but I like it. It was great for me. I was always looking at the series, the national here. It’s like something special to ride on this track, so I really enjoyed it and I hope it will be back here next year. 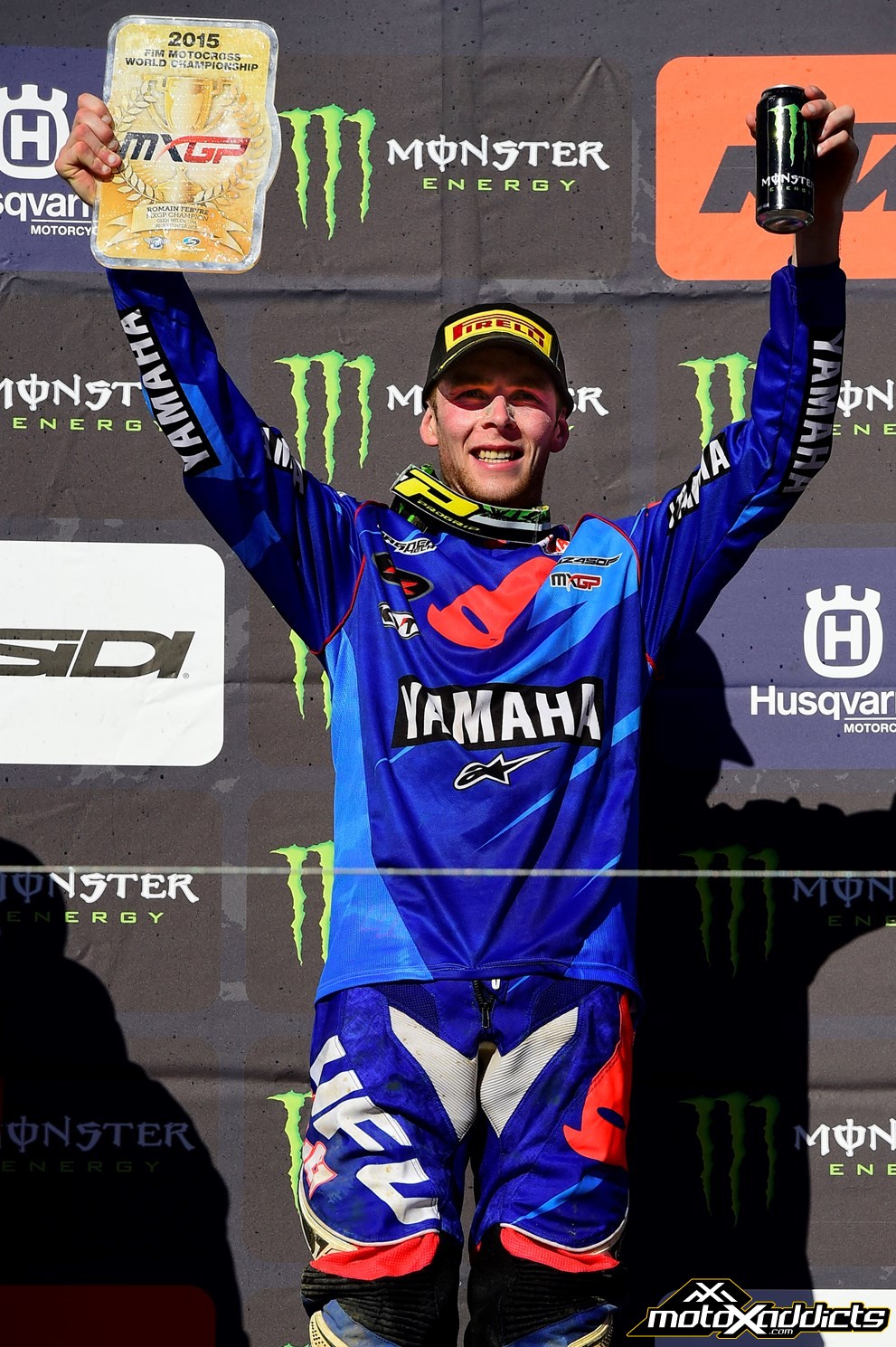 Romain showed off his World Championship Gold Plate on the podium at Glen Helen. Photo by: Yamaha Racing

Yeah, big year for you—rookie year, world championship. Did you surprise yourself this year? Is that a dumb question? (laughs)

Yeah, yeah, for sure I surprised myself and also the team, everyone. Last year I had a good year also–I finished third–but I made many mistakes. I learned a lot from that. Just the winter was not so great for me. I had two injuries—one on the shoulder, one on my back. I lost two months of riding and just took it easy the first few months to not be injured again. I just take some points. I knew that with some preparation and more setup on the bike, I would be even better. It started really fast with some podiums then win some motos and GP [overall win] and it’s pretty insane. Still, I didn’t realize now I’m World Champion of MXGP. Everybody around me, they are talking about that, and I’m like, “Oh, yeah, that’s true.” It’s nice for sure. Every week after the title, I realize more and more, so that’s really good. Again, I need to be focused for des Nations, and after I can take some time off.

You said you took it a little easy early in the season because of injuries. While Max Nagl, Antonio Cairoli, Clement Desalle and Ryan Villopoto all had a little more pace than you, anyone watching closely could see you were closing the gap, and fast. Did all four of them getting injured take away from your World Championship or do you feel like this was your title either way?

Yeah, like, my first podium and first moto I won and the first GP I won also, all those guys were still there. Just Villopoto missed France, also England for sure, but I passed Desalle and Cairoli when they were fit. So that was good for me, and I knew that I had the speed. When you start to win some motos and everything, you get the confidence, and it’s a lot in this sport. It was good.

Next week is the 2015 Motocross of Nations in your home country of France, and as you know, it’s going to be nuts. We have crazy motocross fans at RedBud, but nothing quite like the passionate French moto-crazies. Do you feel a lot of pressure going into MXoN being defending champions and wearing the #1, #2 and #3 at home?

Yeah, I’ve never been to des Nations as a rider, so it will be my first time. I will see. I have no pressure for sure. It will be insane for sure with the French crowd. Already I did the GP there also. So it will be great to come there over there with the title. Yeah, we need to work on that to have some solid motos and to win again. That’s the goal. 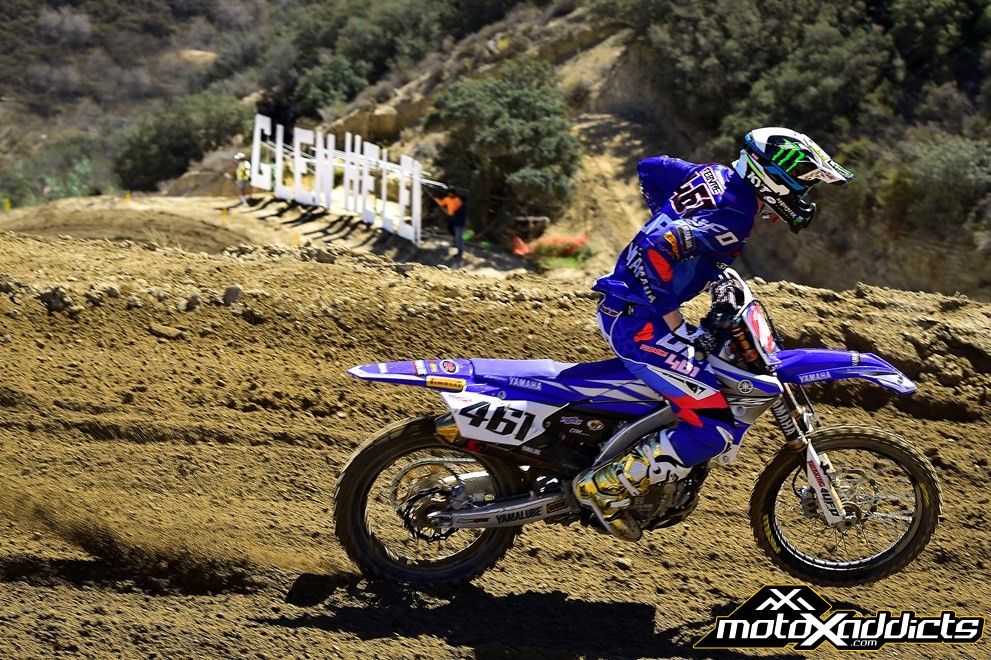 Romain’s freshman MXGP campaign may already be the best rookie season in MXGP history but if he can end it by helping to lead France to back-to-back MXoN wins, there will be no doubts. Photo by: MXGP.com

Most agree that Gautier Paulin has earned the MXGP spot for Team France with his ability to raise his game for the past several MxoN, but quite a few people expected the World Champ to have the #1 bike. Were you involved in that decision and are you fine with racing the Open class?

No, no, no. We didn’t have a discussion about that. Just I think because he won last year with the French team, I think he wants the #1 or something. I don’t know exactly what they did, but I prefer Open. I don’t like to ride with the #1 in the front of the French crowd; that’s not good for me. (laughs) So when they told me you are the #3, I was like, “Yeah, that’s good, that’s good.” (laughs) I don’t care so much. Open or 450, it is the same class, just a number or something. I prefer to ride the #3.

Alright, nice meeting you, and congrats on your win today. 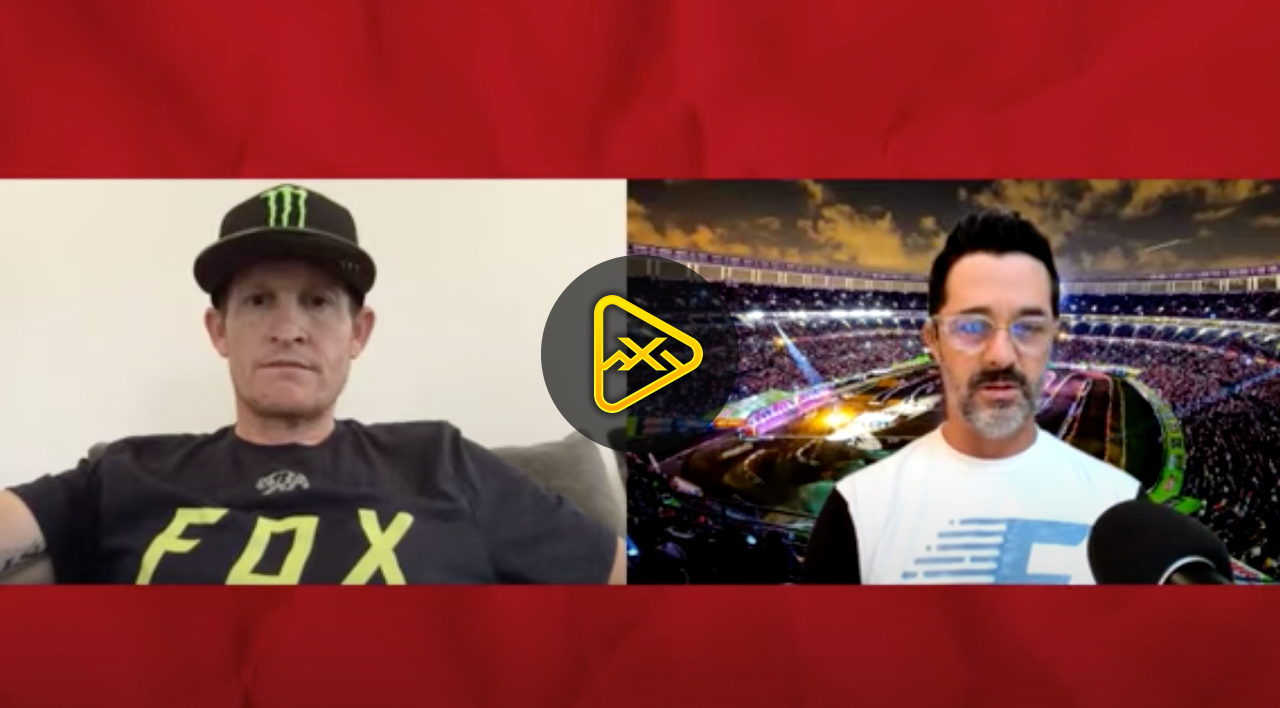 REAL TALK 447 with Carmichael and Emig