Valentin showing off his podium hardware from the USGP. Photo by: Yamaha Racing

The 2015 FIM MX2 Motocross Championship concluded their series at the MXGP of the USA at Glen Helen raceway, and while two Americans dominated MX2 and Slovenia’s Tim Gasjer clinched the MX2 World Championship, one Swiss rider stood out as the class of the GP regulars all weekend long: Standing Construct Yamaha’s Valentin Guillod. Valentin had all the American fans not familiar with the series wondering who the #92 Yamaha attacking the Glen Helen circuit was.

In Saturday’s qualifying race, Valentin was the top European—qualifying 2nd behind Jessy Nelson—and he continued that trend with a third overall behind Nelson and Shane McElrath on Sunday. In moto one, Valentin got a 10th place start but, by lap thirteen, had worked his way up to 4th with an inspiring ride. Following Valentin from the middle of the pack to the front was Max Anstie, and on the final lap, Max made a pass stick to steal 4th from Valentin. Valentin crossed the line less than a tenth of a second behind Max in 5th. 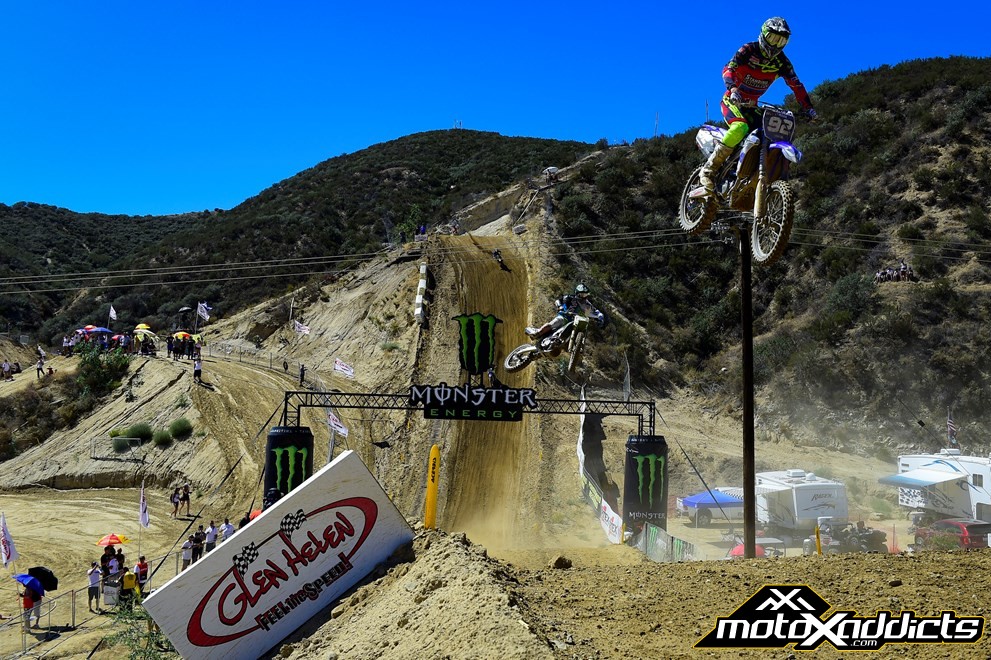 Valentin Guillod (in front) was stalked and passed by his MX2 Championship rival Max Anstie (in back) on the final lap of moto 1. Photo by: Yamaha Racing

In the final MX2 moto of the year, Valentin got a much better start and converted it into a better finish. At the end of lap one, Valentin was fourth behind the now 2015 MX2 Championship, Gasjer, but by lap four, he had moved up to 3rd. With the Americans knowing the fast way around the Glen Helen circuit, he fell to thirty-two seconds off the lead, but he crossed the line with a solid 3rd place finish in the moto.
With his 5-3 score on the day, Valentin earned his career-best sixth podium and finished the MX2 World Championship in fourth. In America, this would have been considered an awesome building year towards going for the 250 Championship the next year, but with the age rule, the #92 will graduate to the MXGP class in 2016.

After the race, we hunted down Valentin, half because we really wanted to meet him and half to hear how his weekend went. You can hear what our conversation was about in his “Race Rewind” interview below.

Valentin, 3rd overall today. I should know this, but was this your first USGP?

Maybe I missed you. (laughs)

Yes, for sure, you missed me. 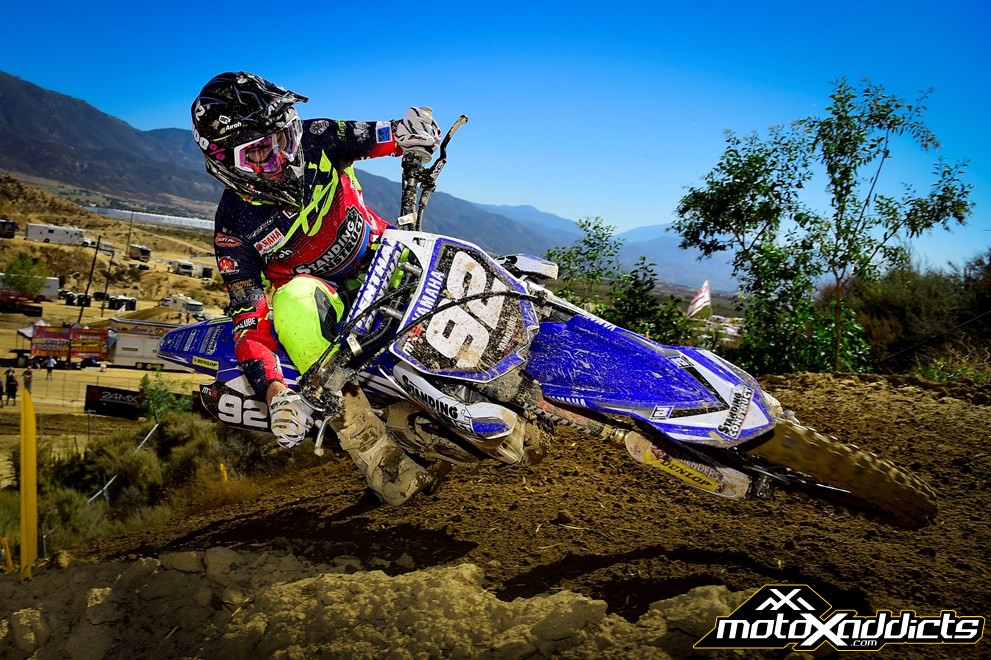 Guillod has a beautiful style on the Yamaha. Photo by: Yamaha Racing

So, overall how do you feel your weekend went? You have to be happy with your performance.

Yes, very good. All the weekend was really good. Yesterday I finished second in the qualifying race. Today was really tough with the hot weather, but it was good. You know, first race I finished five. Max Anstie just passed me on the finish line. It was really tight, but it’s racing. In the second race, I will try to fight with the American guy, but with the Yamaha, we have a lot of problems with the start. It’s been hard to start in front, like in top five. I start always between 10 and 15, and we didn’t find the setup to have a good start. I make some good first laps to try to get to top place and try to come back on them, but I was really tired from doing it. I tried to keep on my wheels, don’t make mistakes. Then on the last lap, my mechanic showed me that I make the podium, and I was really happy to finish on the podium at the USGP.

Nice. That’s weird that you talk about the setup because in America I don’t remember the guys struggling that badly on the Yamahas on starts. I remember a lot of holeshots, but now that you mention it, that was only in the 450 class.

Yeah, I don’t know because, you know, like last year in 2014, the Yamaha was starting always in front, also always see [Christophe] Pourcel, [Jeremy] Martin and Cooper [Webb]. But this year it was like only one Yamaha in front and then in the back, so I don’t know if it’s the 2015 bike was like this, but yeah. Last year, I made a lot of holeshots with the KTM, but this year—one time I think—the best one was third place. It’s like this, we start from white paper at beginning of the year because we ride KTM last year. Nobody had experience with the Yamaha, but the goal with Yamaha is to was to show that the Yamaha 250 was a competitive bike, can ride in front, and I won three GPs, six podiums and finished fourth overall in the championship. It’s my best year in my career, so I think it’s very satisfying.

You adjusted to this track fast. You obviously finished first out of the GP regulars, but from the first practice on, you seemed to adjust fast to the Glen Helen circuit and attack everything. Why do you think that is?

For sure, it’s like the lap is much longer than in Europe. In Europe, our tracks are one minute, forty seconds, and here it’s two-fifteen or two minutes twenty. You know when it’s motocross, it’s motocross. There is uphill, downhill, bumps, jumps—it’s the same everywhere for sure. Here it’s a bit faster; you have to be more focused. What’s really impressive is that you have many lines in the corner. 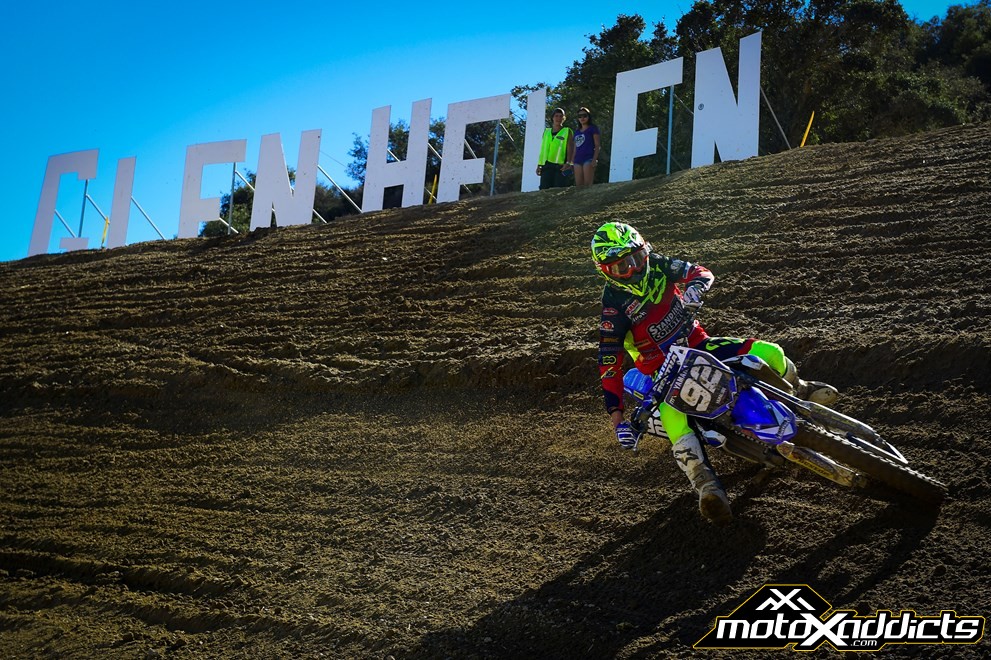 Every GP regular we talked to loved the preparation of the Glen Helen circuit. Photo by: Yamaha Racing

Yeah, we rip the tracks deep before the major races.

Yeah, and you can take the outside. You are much slower than the inside line, but if you rail, you are the same speed or faster and you can pass. That’s really awesome! The choice of trajectories, it’s really good and great to have a track like this.

Do you ever think of coming to America and racing? How are your Supercross skills?

You know, I had a lot of proposals from American teams, but I build with my trainer Yves Demaria something from 2013. He makes me become a professional guy, and I don’t want to break that, come to the US and start something new again. My choice was to stay in Europe for ’15 and next year.

Maybe in the future then?

Maybe in the future for sure. We don’t know the life how it’s going to go, but you know I’m always watching the Supercross. It’s really an awesome show, and for sure in the US they have a bit better track preparation. In Europe, we are a bit too much old school I think, but it’s like this, it’s part of the thing and it’s good.

I appreciate it. Thanks for talking with us and nice meeting you.

Craig Returns to the Top at Indianapolis 3