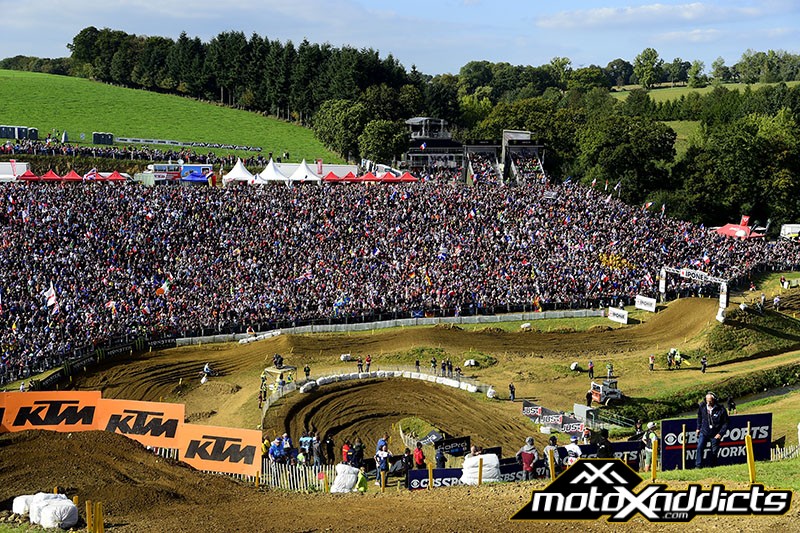 There is no off-road motorsport event bigger or better than the Monster Energy FIM Motocross of Nations and the atmosphere and racing here today in Ernée has added even more fuel to the fire as Team France’s Gautier Paulin, Marvin Musquin and Romain Febvre, the defending champions and home team, dominated all three races to qualify on pole as a perfect start to their MXoNcampaign. 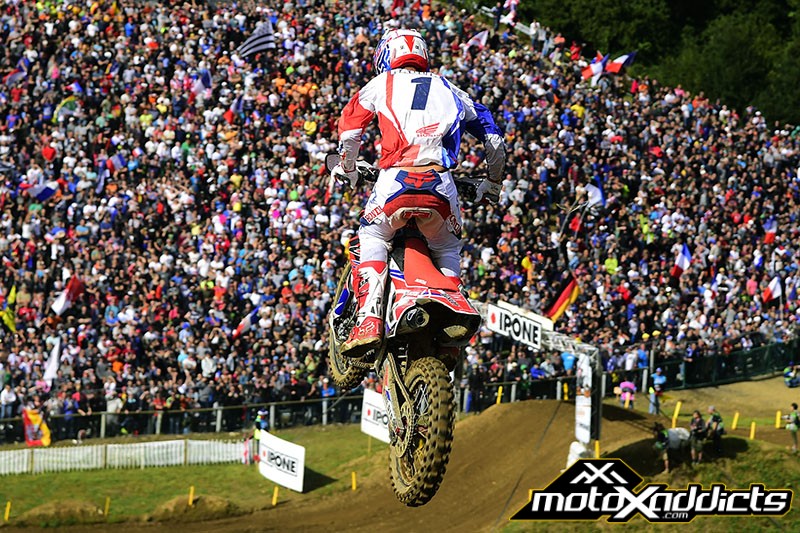 Taking us right back to the unforgettable FIM Motocross of Nations that took place at this exact track in 2005, New Zealand’s Ben Townley burst out of the gate for the holeshot ahead of Sweden’s Fillip Bengtsson and Team Belgium’s Ken De Dycker.

Team France’s Gautier Paulin started around fourth and had the fans in frenzy almost immediately when he set a lap time 1.2 seconds faster than anyone else out on track on lap 4. Despite his blistering fast pace, it took the Frenchman a few laps to get around De Dycker but eventually he got the job done.

The flying number 1 of Paulin then pulled the pin and hunted down Townley for the lead, which he easily took since lappers got in the way of Townley. Paulin checked out to win by 11 seconds over Townley.

Team Great Britain had luck on their side during balloting this morning when they drew number 1 for first pick at the gate but Shaun Simpson didn’t see any of it when he was robbed of third after being landed on by a back marker on the final lap. Meanwhile Team USA’s Justin Barcia took advantage of Simpson’s misfortune after passing a fast fading De Dycker and finished third.

Team Germany’s Max Nagl had a spill on the second lap but was quick to regroup and bought it home for fourth while De Dycker managed to hold on for fifth. 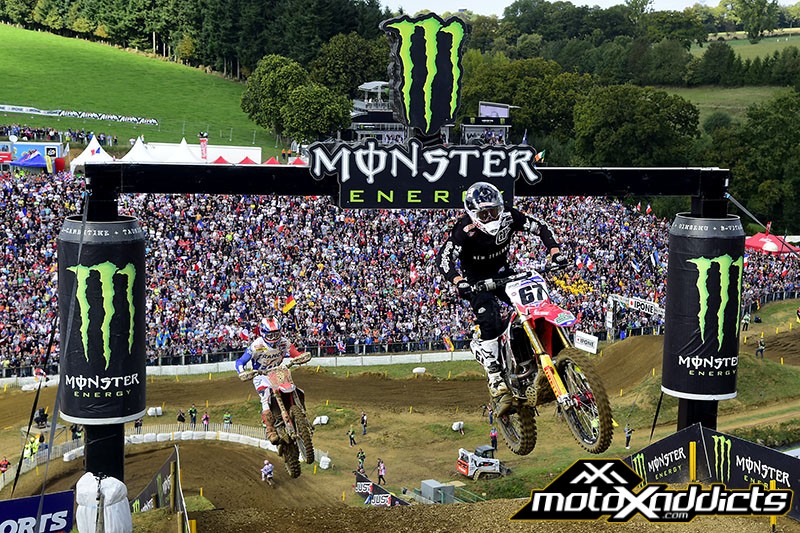 Ben Townley was probably the surprise of the day in qualifying. Photo by: MXGP.com 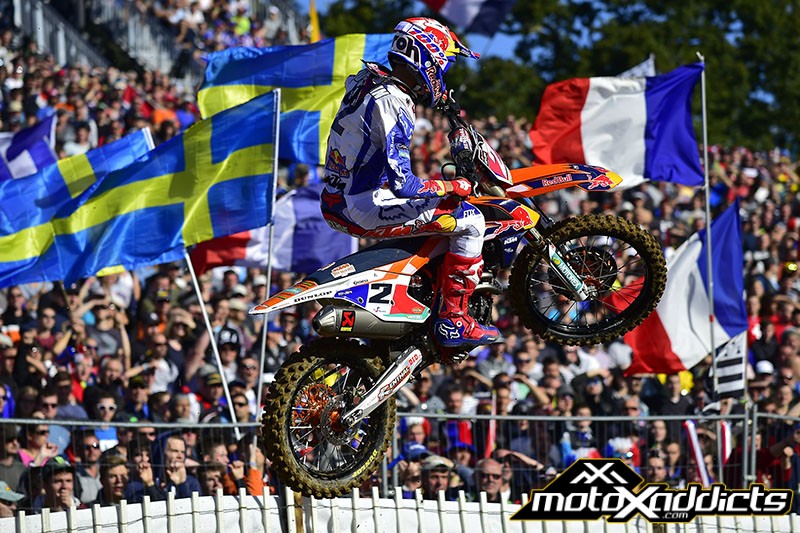 Marvin Musquin made it two wins in two for the home team. Photo by: MXGP.com

With Gautier Paulin getting Team France off to the best start they could hope for, it was down to Marvin Musquin to keep the ball rolling. Musquin didn’t let the team down; he pulled the holeshot and checked out for a easy race win ahead of Team USA’s Jeremy Martin who rode to a lonely and unchallenged second.

Team Great Britain’s luck changed in the blink of an eye when Max Anstie made a mistake coming out of the 180 before the downhill triple, stalled the bike and was landed on while trying to bump start it.

Meanwhile Team Austria’s Pascal Rauchenecker was the lethal dark horse in MX2 as he rode in third place for the majority of the race before Team Switzerland’s Jeremy Seewer found some extra drive and out dragged him for the spot. Seewer pulled a reasonable gap while Rauchenecker was forced to hold off the hard charging Belgian Julien Lieber, who eventually rounded out the top five. 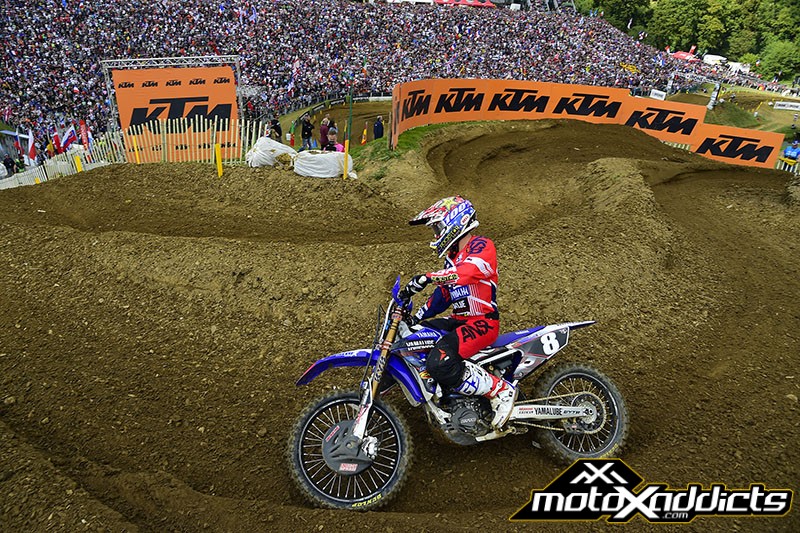 Jeremy Martin finished a solid 2nd, but could not stay with Marvin in the MX2 qualifying race. Photo by: MXGP.com 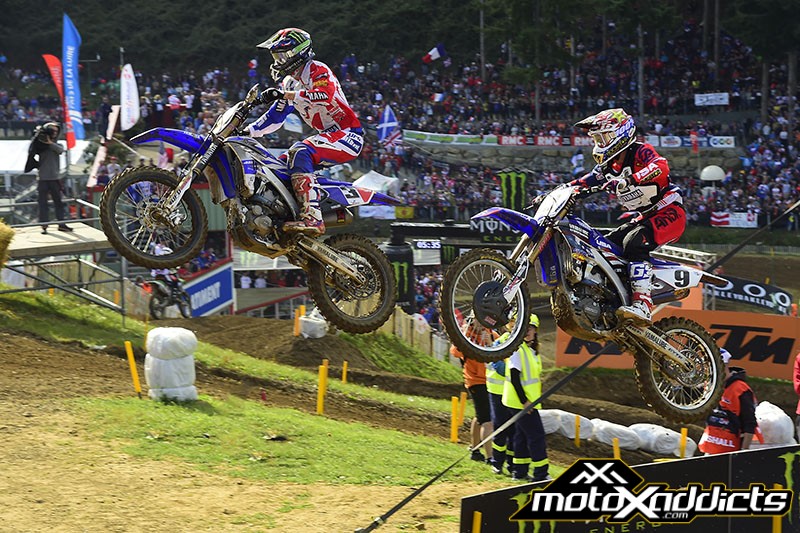 Romain Febvre #3 and Cooper Webb #9 picked up right where they left off at the USGP. Febvre took the win for France, with Webb finishing a close 2nd for USA> Photo by: MXGP.com

Gajser passed Ferris one lap in but threw it away half a lap later when he got cross-rutted on one of the steep down hills and crashed. Then it was Febvre who made light work of the Australian who later curbed a rut in the latter stages of the race and binned it too.

With Webb and Febvre out front, the Open class was clearly a two horse race as the duo held nothing back in their battle for the lead. After bashing bars for half of the race, which had the massively enthusiastic French fans going ballistic, a small mistake from Webb saw Febvre make the pass and gap it to make it a perfect day for the defending champions, Team France. 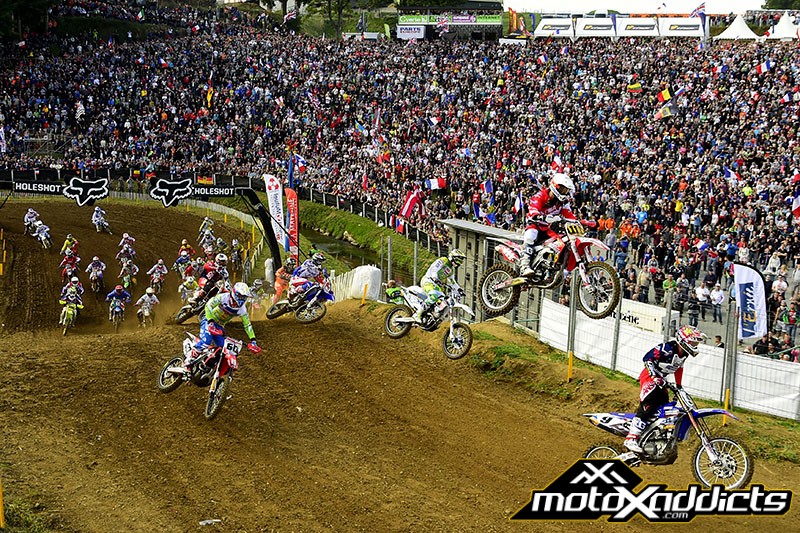 Webb #9 pulled the holeshot from the 26th gate pick. Photo by: MXGP.com

A super smooth Webb took a convincing second while Team Belgium’s Jeremy Van Horebeek and Team The Netherlands Glenn Coldenhoff bickered the entire moto and finished third and fourth in that order.

Team Great Britain’s Dean Wilson was slightly deflated by the bad luck his teammates Shaun Simpson and Max Anstie faced, but soldiered on to round out the top five.

Team France will be on pole after winning all three Qualifying races today. Team USA are the clear cut runners up while Team Belgium round out the top three. Solid performances by the Germans put them in fourth followed by Team New Zealand in fifth.

MXGP will be available across the board in high definition and is also globally available to view live and in HD on MXGP-TV.com. Click here for the complete list of countries and cooperating MXGP broadcasting networks.

JUSTIN BARCIA ON THE GAS WITH A PODIUM FINISH IN ORLANDO 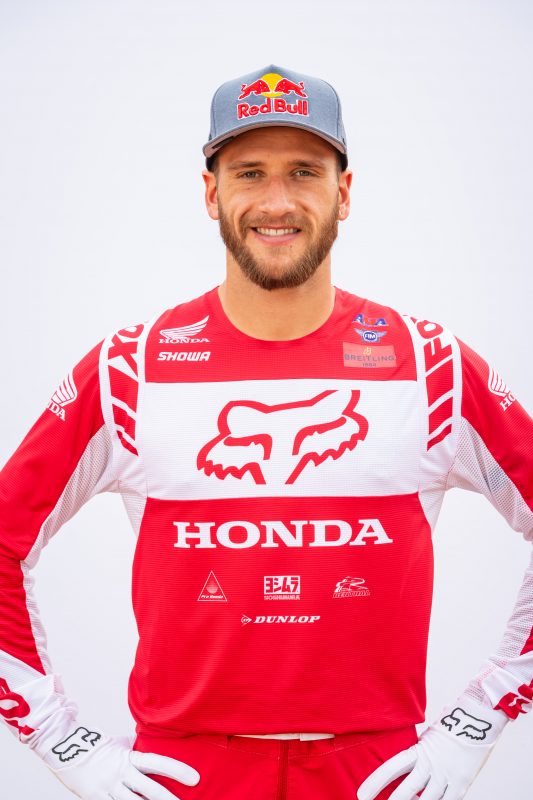