Regardless of what nation you support, the atmosphere here at the 69thedition of the Monster Energy FIM Motocross of Nations in Ernée could have moved mountains. In an edge of your seat outright brawl to the finish, Team France’s line up of Gautier Paulin, Marvin Musquin and Romain Febvre have defended the Chamberlain Cup for the first time in French motocross history to put a hair raising end on the greatest event ever. 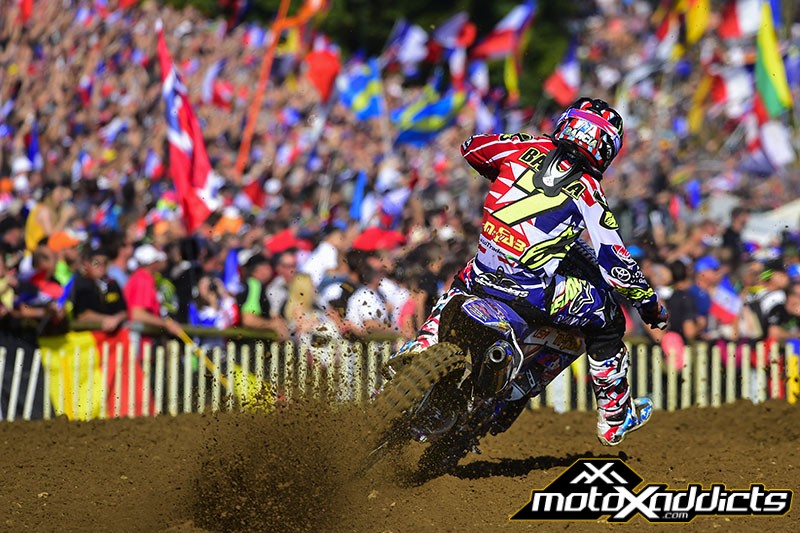 Justin Barcia took the win in
Moto 1 to give Team USA the advantage after the opening moto.

Race one demonstrated just what the motocross of nations is all about. Team USA’s Justin Barcia and Team France’s Marvin Musquin had an epic duel in the first half of the race as they held nothing back in their battle for the lead. While the intense French fans were backing the US based Frenchman, he threw it away in spectacular style on a jump at the bottom of the track, “I got too excited, the crowd was going crazy and I made too many mistakes and finally I went down” he said. Nevertheless, he was quick to regroup and only lost two positions.

In the time it took Musquin to regroup, Team Russia’s Evgeny Bobryshev and Team Germany’s Max Nagl took over the second and third positions and rode it home unchallenged.

At one point Team USA’s MX2 rider Jeremy Martin started closing in on Musquin for fourth, but as the Frenchman, who set a laptime 2 seconds faster than anyone else on track, returned to full force Martin couldn’t respond to the challenge and let him go.

Meanwhile Team New Zealand’s super spoiler Ben Townley was riding on rails as one of the veterans of the event and came home in sixth ahead of the defending champion and top qualifier Gautier Paulin who binned it when he got a little too trigger happy on the front brake. 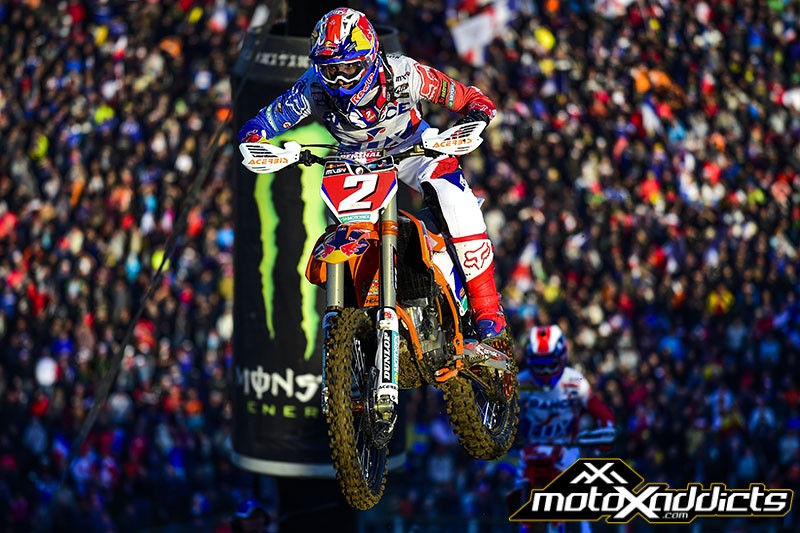 Marvin Musquin caught Barcia and made the pass for the lead, but Barcia was able to regain the lead. While Musquin was not able to win the moto, he was a huge part of France’s win and the overall MX2 winner. 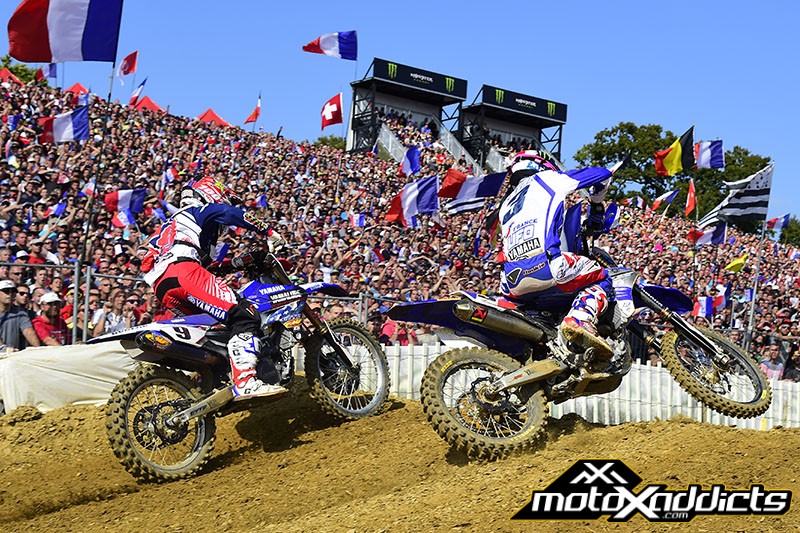 Romain Febvre (lead) and Cooper Webb (behind) put on a show in moto two that few will soon forget. In the end, Romain once again got the better of the fight.

With Team USA taking the early lead after Justin Barcia cleaned up in race one which was paired with the fifth ofJeremy Martin, their Open rider Cooper Webb was proper fired up and ready to maintain the solid attack of the stars and stripes. Webb banked the €1000 Fox Holeshot cheque after leading Great Britain’s Dean Wilson andTeam France’s Romain Febvre around turn one. Febvre didn’t waste much time in getting around Wilson, who was riding a pretty wide line, and went after Webb who had pulled a slight gap.

After ditching Wilson, the hillside erupted with excitement as the home rider went up the inside of Webb for the lead. Webb didn’t let it go and kept hot on the heels of the reigning MXGP world champion before tipping over while trying to change his line in an attempt to avoid a slower rider.

Webb’s fall took the heat off of Febvre but he didn’t lose a position and still came home for a solid second. Meanwhile the battle for third was raging as Team Belgium’s Jeremy Van Horebeek and the MX2 hotshotsMarvin Musquin and Jeremy Martin crept up on Wilson and nudged him back to sixth. 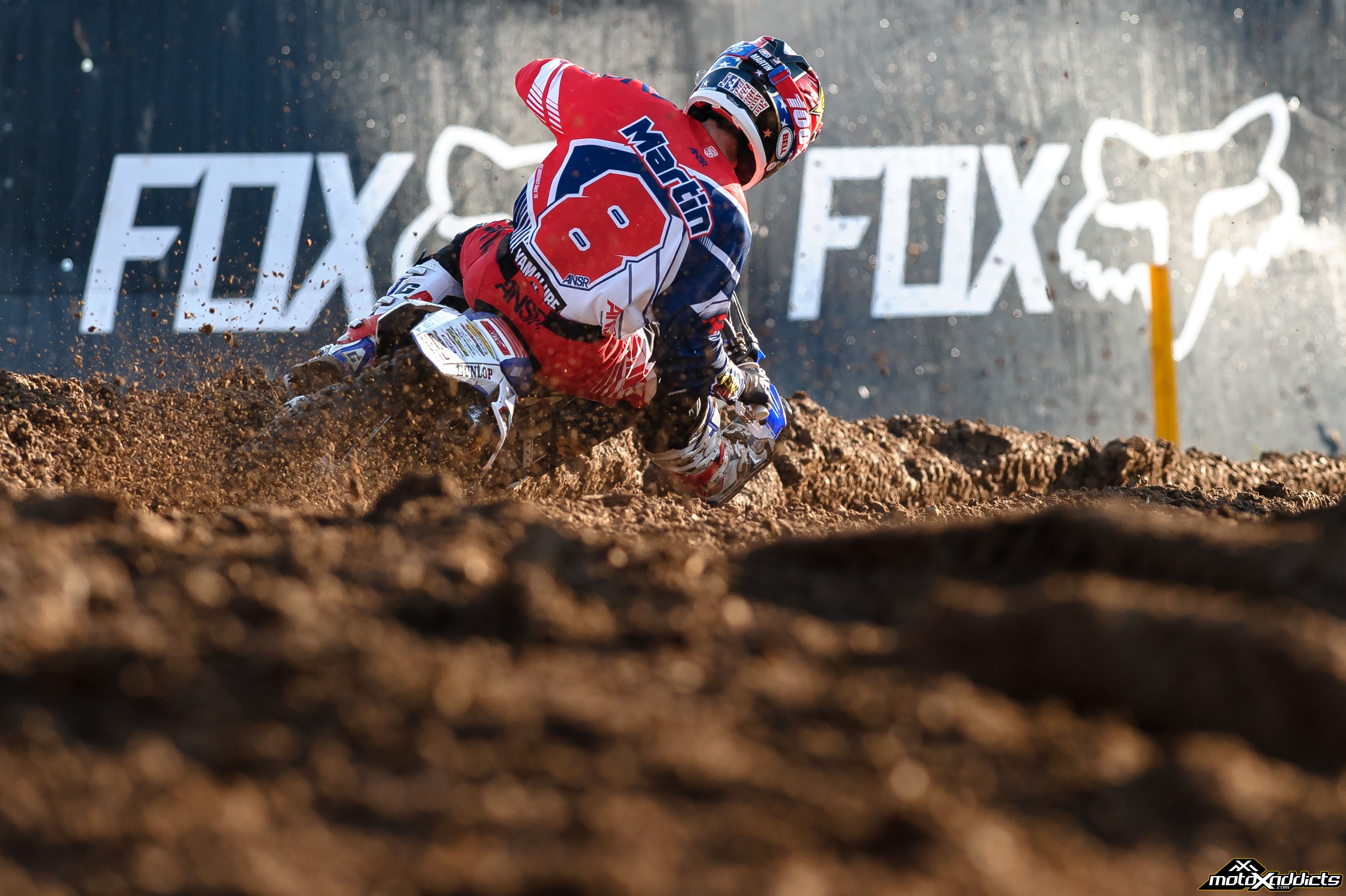 Jeremy Martin was 2nd overall in MX2, but he had nothing for Marvin Musquin on this day.

Van Horebeek was setting a fierce pace but couldn’t hold off the wrath of the Frenchman who was egged on by the patriotic crowd. Musquin, with his creative line choice, put a super sweet inside to outside pass on Van Horebeek and pulled a five second gap for a comfortable third. Van Horebeek and Martin rounded out the top five. 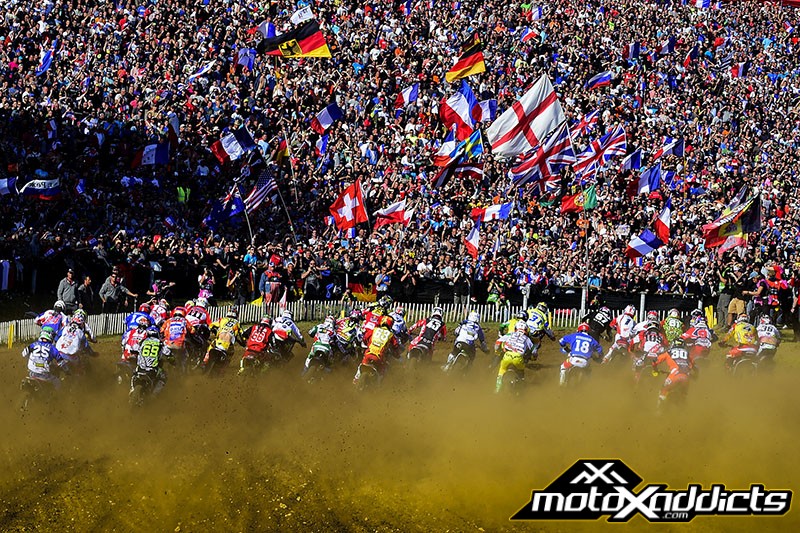 Heading into moto three, Team USA lead Team France by just two points. Everyone knew the start would be of great importance and it was the French getting out to the front early.

With the crowd louder than the sound of the forty revved out 450’s, the gates dropped with Team Sweden’s Fillip Bengtsson and Team New Zealand’s Ben Townley going neck and neck around turn one. Chasing them was France’s young phenomenon Romain Febvre followed by Team Russia’s Evgeny Bobryshev and Team Belgium’s Ken De Dycker.

Throwing a spanner in the works, both of the race 1 and race 2 holeshotters, Team USA’s Justin Barcia andCooper Webb, were buried while a hungry Febvre was taking no prisoners on his mission to the lead. He managed to out-drag Townley in a bar to bar sprint towards turn one and although he made the pass stick he couldn’t shake the Kiwi who chased him home for a mind-blowing second.

As the race ticked over half way Webb hit the turbo button and caught his teammate Barcia who was running sixth at the time. With team tactics coming into play, Barcia pulled over for his hauling teammate Webb but the youngster came undone three turns later when he stalled the bike. Knowing what was at stake, Barcia decided to give his turbo a tap and impressively passed Paulin and Bobryshev to come home in third. Bobryshev put in another great ride for fourth ahead of Paulin while Webb managed to get his bike fired up third kick and came home in sixth. 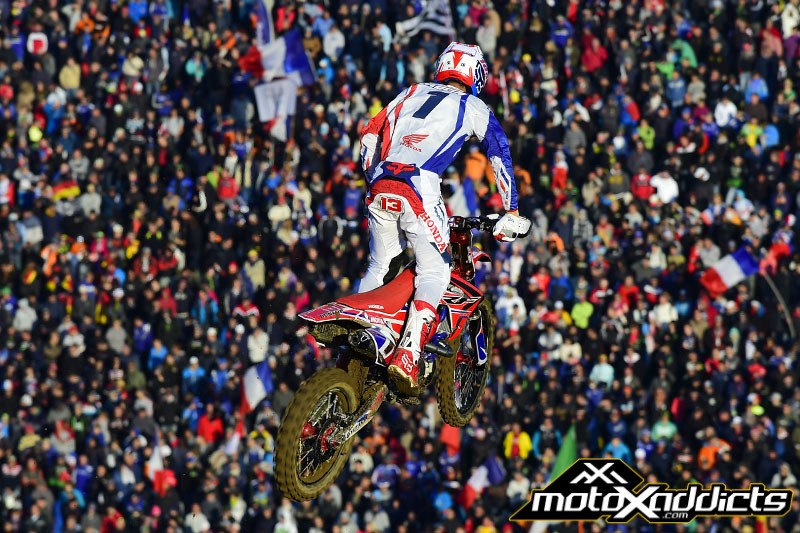 It was Musquin and Febvre that won the MX2 and Open Class overalls, but Gautier Paulin’s gritty performance on an injured knee was enough to help France get the W.

It was complete and utter pandemonium at the checkers as Febvre bought home for France with a perfect score in the open class. Paulin finished fourth overall in the MXGP class which combined with Musquin’s overall victory in MX2 saw Team France defend the Chamberlain Cup on home soil for the first time in their history.

Team USA came so close yet so far with Barcia winning the MXGP class while his teammates Martin and Webb finished second in their classes for the team to lose by only two points. Meanwhile Team Belgium made the best of a bad day to round off the podium in third.

In other news, Team Latvia’s Pauls Jonass was awarded the Ricky Carmichael award for the most promising young rider. 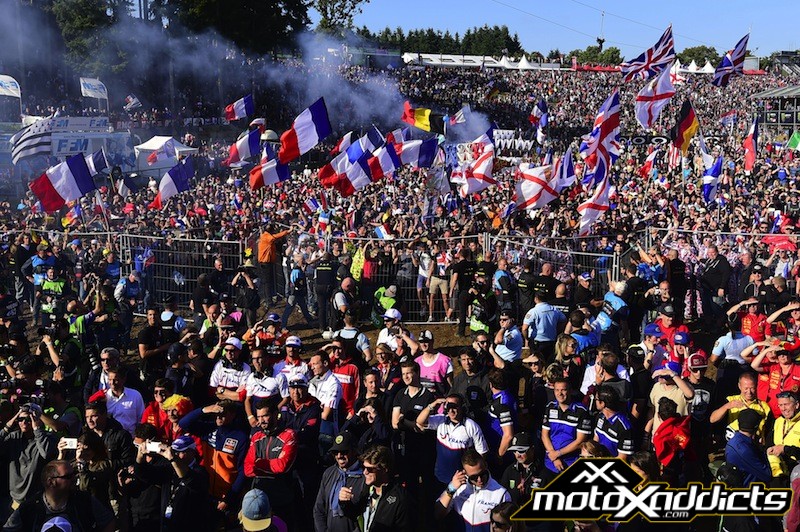 The French fans made everyone proud to love Motocross.

The 2015 Monster Energy MXoN was available across the board in high definition and was also globally available to view live and in HD on MXGP-TV.com. Click here for the complete list of countries and cooperating MXGP broadcasting networks. 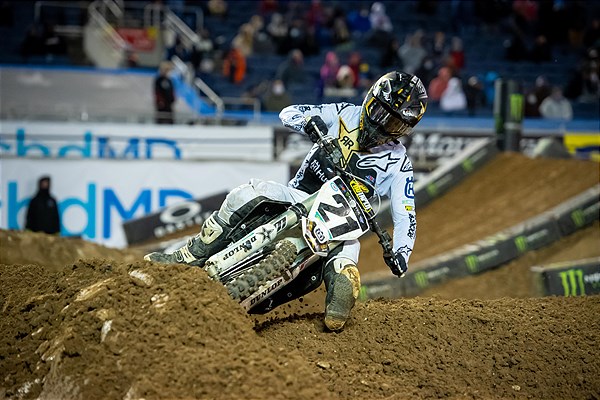