Last weekend’s MX2 victory by Thomas Covington in Turkey continued a really special relationship between American riders and the FIM Motocross World Championships and also took him into a very select group of legends.

The likable Husqvarna rider joins Ricky Johnson, Tallon Vohland and Jeff Stanton with four GP wins, and he has the chance in Assen in two weeks (a circuit he does well on), to become the only American with five GP wins. Below is a little of the American history at the top of the GP podium.

All the way back to 1973 when a young Jim Pomeroy captured the Spanish GP victory right up until that timely victory by Thomas Covington the riders from the land of the stars and striped have more than done their share of winning at GP level.

There are 33 American riders who have won Grand Prix’s since Jim Pomeroy took their first at the Spanish GP in 1973. A large portion of those winning the USGP when it visited American soil, but many have found their success on the tough European circuits or in places like Japan, Indonesia and Venezuela.

Some of the most famous American winners were of course Jim Pomeroy, who was the first American to win a GP, way back in 1973 in Spain. Marty Moates classic 500cc USGP victory at Carlsbad in 1980 was the start of the American dominating of the USGP in the 1980s.

Who can forget the very first GP victory for Brad Lackey at the famous Farleigh Castle circuit in England? Back in 1977 the young American racer showed great resolve to take victory and start his own success story in Europe.

Or Danny Laporte and his assault in the world 250 championship in 1982. Starting terribly the American came on strong in the middle rounds, winning in France, England and Holland. It was that run of victories that secured his world title.

Americans have been an important part of the history of Grand Prix motocross and now with Darian Sanayei and Thomas Covington showing great speed in 2018 that relationship continues and hopefully more victories will come in the future. 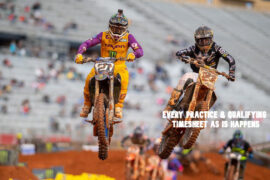