The atmosphere at the 2018 Monster Energy Cup is unlike any other event on the series. Racers take it seriously, but not too serious. An example is 4-time Supercross Champion Ryan Villopoto who decided on last Wednesday to suit up. He is far from his championship form, but not since Ezra Lusk raced the U.S. Open in 2009 have we seen a retired rider look this competitive. Don’t expect him to be battling for a win, but don’t be shocked if he lands on the podium in one of the three races tonight.

Eli Tomac looks like he is here to prove last weekend was a fluke, don’t be surprised if he is holding the million-dollar case around 10pm pacific time. Marvin Musquin looks good but seeing the #1 on his KTM looks awkward. I know it’s only for this race, but when I think of running the #1 plate I think of season champions not one race. Watch for Joey Savatgy and Malcom Stewart to make some noise tonight. Joey looks smooth on the Factory Kawasaki 450 and if practice was any indication the 450 suits his style better than the 250. Stewart on the other hand went over the Dragons back faster than any human I have seen but can’t seem to find the flow everywhere else.

Fan favorite Chad Reed looks good, but his times are not much better than when we saw him in May. He seems to be stuck in a group of riders from 10-15, but we all know he is a betted racer than qualifier. The track is very simple and not much separation, except Malcom Stewart made his brother, James Stewart, proud by being the only rider to triple into the sand. I am not sure if it was faster, but it was spectacular! Sit back and enjoy this appetizer to the 2019 series.

Click Time Sheets to View in Slideshow *Everyone else to LCQ 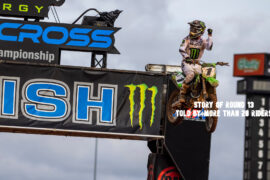 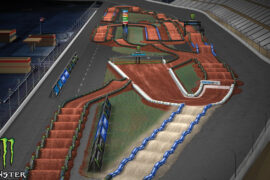