Justin Barcia Interview – Back on Top

There is nothing better than a good comeback story, and Monster Energy / Yamaha’s Justin Barcia began the 2019 chapter of his own comeback story with a surprise come from behind win at the opening round of the 2019 Monster Energy Supercross, an FIM World Championship series. The #51 came from just inside the top five to pass his way into the lead on lap fifteen and check out for the 2019 Anaheim 1 SX win—his first SX win since the 2013 Seattle SX.

While everyone was talking about Jason Anderson, Eli Tomac, Ken Roczen and Marvin Musquin heading into the opener, Barcia showed up at round one and inserted himself back into the 450SX Championship conversation. The big question: Can Justin become a consistent threat for wins all year long?

After the celebrations, we caught up with Justin to ask about his big win and his struggles over the last few years. 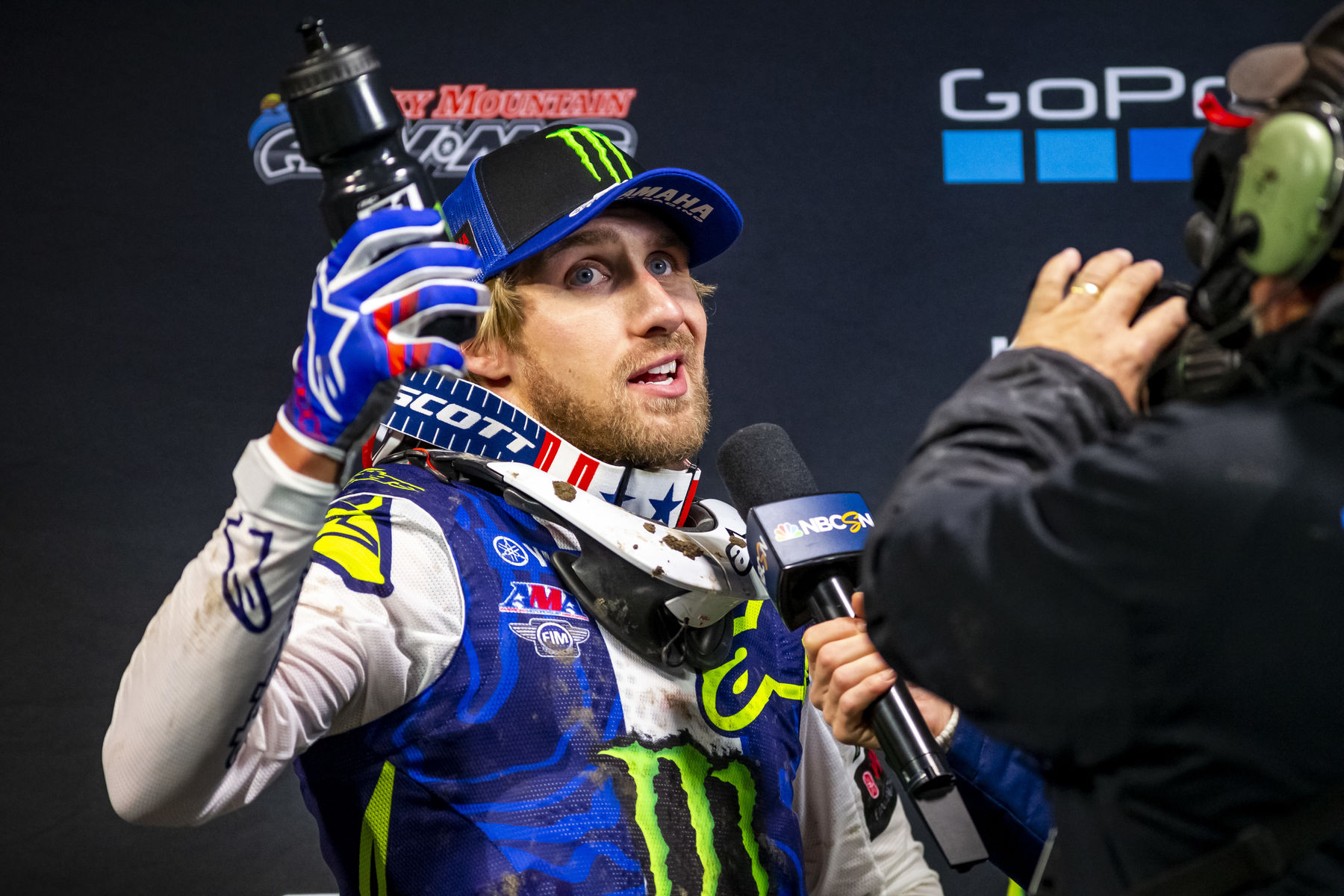 It’s awesome seeing that confident BamBam attitude back in the sport. For a while we thought it was on it’s way out.

Justin, you mentioned that it’s been six years [since your last win] and you were open about how difficult things were. My god, what an incredible story!

It’s a cool story, for sure. I definitely embrace it ’cause I’ve been all the way to the bottom. Like almost quitting to back to winning this weekend. For me, it’s phenomenal. I’m glad I never let this tough racing career get the best of me. I just kept charging, worked hard and made my way back to this position. It’s phenomenal! I can’t be any more happy than to get a win here. It’s been six year and I remember it was Seattle and it was a little bit muddy that night. So this brings back some really good memories.

Over the last couple of years you had some injuries, but I think maybe some of your issues were more emotional or mental, if that’s the right way to say it near the end of 2017?

I think for me, I left Honda, got my ankle fixed and went to JGR. I was like a winner and I should have been a Championship contender. I just never matched with the team. I had a lot of injuries and I just was never comfortable. That mentally beat me down to the point where I wasn’t having fun racing any more. I wasn’t me. I was someone else. I was just going through the motions and not enjoying it. I was definitely really lost in my life. I think I’ve said this before: that the best thing that happened to me was finding my wife Amber. Because she’s super smart. She has a masters in psychology and all that stuff. She’s a really smart woman. When I met her I was at the point where I didn’t want to race any more and she got me out of that. With my determination, digging deep and going to the Monster Cup on my own, then getting a call from Yamaha to fill in and hitting the podium at the first race in Anaheim and doing good in outdoors, it all led to me feeling like my old self when I was on 250’s winning races.

Do you ever look back and think of what might have been the catalyst to your down slide? I looked back at your career and it seemed like that injury during the offseason SX in Europe when you first went to JGR started it all.

Yeah, that was a scary one, for sure. I’ve had big crashes, but it was more things right on top of each other. I had that, then I was testing for SX and my bike cut out on a face of a triple and I broke my pelvis. I was out for a while with that. Then I’d try to come back and try really hard and then I hit my head a couple time. I just wasn’t right. I wouldn’t say it was a one thing. It was just more like there was a lot of pressure to perform on that team and I was never able to get comfortable on that bike. Then with all the injuries it was a snowball effect. In my opinion, it was the best thing that ever happened to me in a way. It’s made me so much tougher—so much smarter. I enjoy the sport way more than I did in the past. I was just like, this will go forever. Then I realized, woh, this might not go forever. 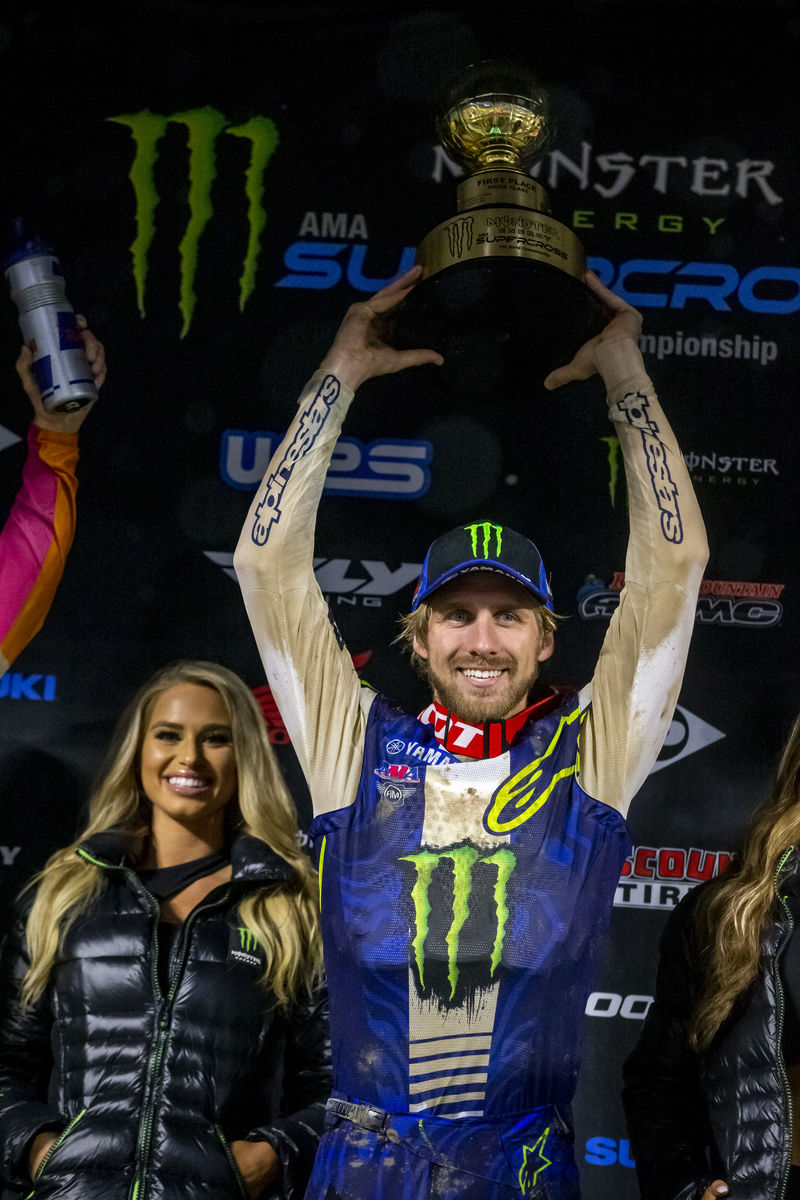 It’s gotta be an amazing feeling to fight your way back to the top of the podium after being written off.

I talked to you at [2017] Monster Cup and it did seem like you were having a lot of fun there as a privateer.

Yeah, I did it myself and had fun. But I could have done way better if I had some support because I didn’t have the parts and stuff during the weekend. With the three moto format, it’s like I’m changing my parts every time and for the last one I ran out of suspension parts to make my bike better. It was like, I need to be on a factory team again. But I did have a lot of fun. I had a lot of cool people around. Like personal sponsors that have been with me forever put that together.

Mom was back in the pits helping you set up and you were vibing with the whole deal. It was cool.

It was cool. Everyone made me feel like I belonged there as well. It was special. I’m glad I went through that situation, honestly. I don’t want to do it again but it was good that I did.

I wanted to ask you about JGR. Yamaha as a factory team pulled out of racing for a little bit and JGR was considered the factory team. It’s interesting that you didn’t gel well with the bike then, but now you’re obviously gelling with it.

It was a completely different motorcycle at JGR. I had a lot of fun at JGR. I really liked a lot of the guys there. I still have a relationship with a few of the guys there. I think there good people, but it just never panned out. I think they’d say the same thing. I don’t think they’d say bad things about me and I don’t say bad things about them. It just never worked out. Coming to the factory Yamaha team, I pretty much came back a year after they went racing again. It was still a really new bike, and Cooper [Webb] was developing it. When I came in, I kind of got on that and started developing it as well. Which was cool ’cause I haven’t been in that position in a really long time. When I was with factory Honda I was always learning, but I was so young and I never really figured out the whole learning the motorcycle. I feel like now when I went to Yamaha, I got to learn the new motorcycle, have an opinion on it and make it my own in a way. I’ve never been able to do that until now. It’s cool to be around people like the Yamaha guys who have been a round a long time. They know what they’re doing. It’s cool to have their experience behind me. 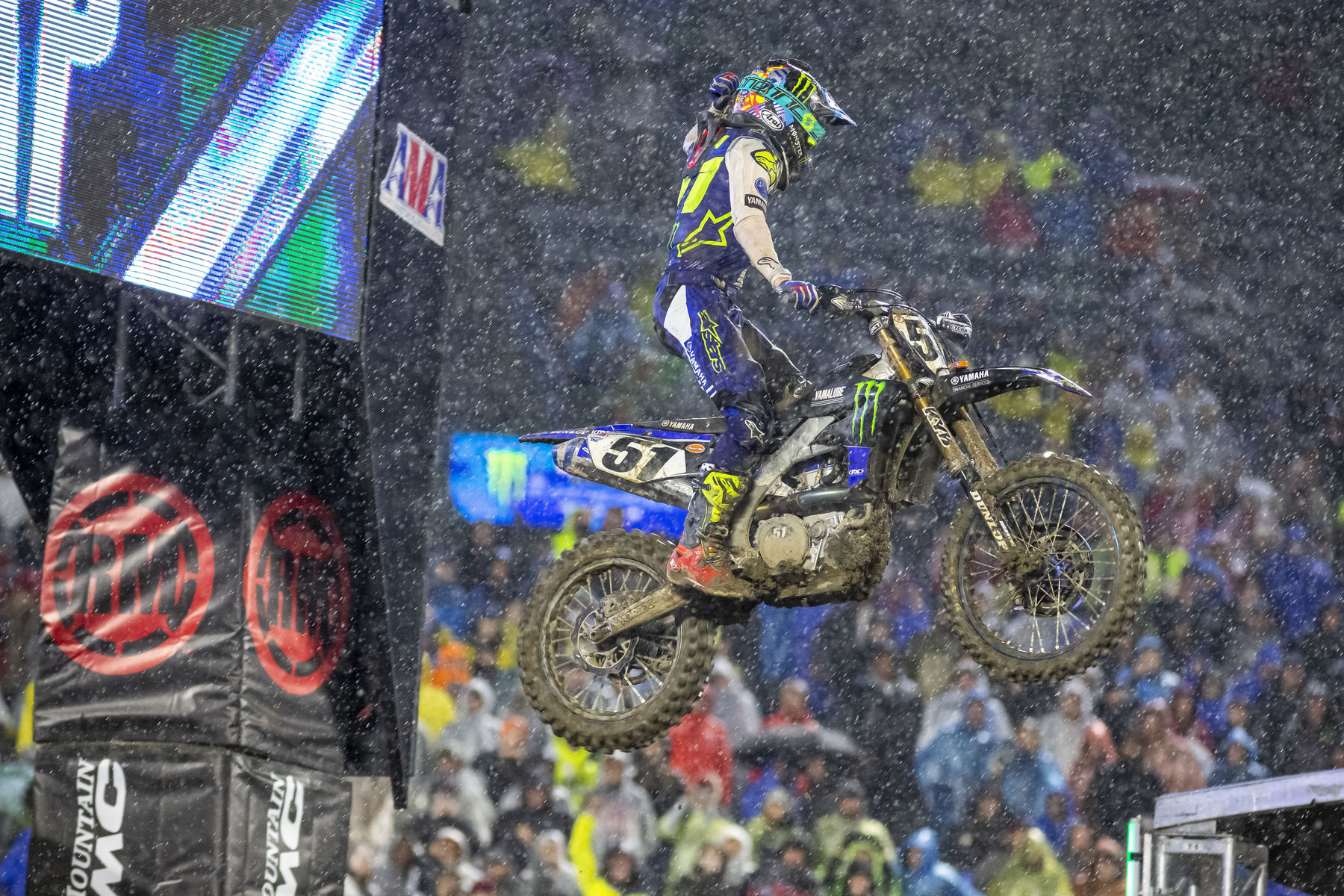 Rain or shine, I think we will see more of this in ’19 and beyond.

I want to ask about your mindset with winning this race. You kind of touched on it [in the press conference]. It wasn’t really a mud race. My impression is the soil is thick and hard which made it greasy. It wasn’t a mud race, but it wasn’t a dry race and you were able to come from a little ways back.

Yeah, you were able to come from the back and work your way up. Someone on the podium said, “you don’t look that happy.” I’ve kind of learned to not get to high and not get to low. Just keep a steady flow. I’m very happy. This is incredible. This is something I dream about—want. This is everything, but I don’t get over excited. I think today, obviously I’m going to take the momentum from this race. I don’t think it was a crazy mud race. You could come from the back and go to the front. I’ll take the motivation from getting the win tonight, bring it to Phoenix and just keep the ball rolling.

You were fastest in the first qualifying session before the rain came.

Yeah, I qualified fast in the dry. The second practice was a little iffy because I messed up the first few laps then the rain came down and I wasn’t able to put in a good time. All in all I was pretty quick all day. It was fun.

How long was that last lap for you? (laughs)

(laughs) I don’t know. It went by pretty fast actually. You don’t want to make a mistake on the last lap. That’s always the biggest fear.

It was probably as long Yamaha too. It’s been like 6 years since they had a win as well.

Yeah, I’ll have to talk to them about that.