The week leading up to the 2019 Anaheim 1 SX, Dean Wilson announced that he was on board with a new sponsorship from the “Ignite CBD” company. Deano announced the sponsorship as “Ignite CBD”, but it is widely known that Cannabidiol (CBD)—one of at least 113 cannabinoids identified in hemp plants—is a very small portion of the Ignite company that produces a wide variety of cannabis product. Because Ignite produces marijuana products, NBC Sports Network forced Deano to black out his Ignite logos on his bike and gear at the Anaheim 1 SX. In the end, though, the company got ten times the coverage because the logos were blacked out than they would have gotten otherwise.

After A1, Dan Bilzerian—owner of Ignite and a social media giant with 25 million followers on Instagram alone—took to social media and blasted NBC Sports Network for forcing Deano to cover their logo, and that ignited (pardon the pun) a huge social media backlash aimed at the brand new Monster Energy Supercross network.

Fuck NBC, those pussies wouldn’t allow the ignite logo on our motocross riders bike. Good news is I get more views on my social media than your bitchass network does pic.twitter.com/sJApbHy274

I understand the uproar from Dean’s fans, Dan Bilzerian and the legalization movement as a whole, but I also see everyone’s side on this deal. While CBD is widely accepted by doctors to have positive uses for numerous ailments and is now legal at the federal level because of the new Farm Bill that recently went through, Tetrahydrocannabinol (THC)—the principal psychoactive constituent of cannabis—is legal for medicinal use in only 32 states, legal for recreational use in just 10 states and for reasons we will never fully understand, is still illegal on the federal level.

When you consider that and the fact that NBC is a company that broadcasts to all States, it should be easy to see where they are coming from. Look, I am a huge supporter of legalizing marijuana and the laws are slowly being fixed, but let’s not get ahead of ourselves. I also hear your screams that marijuana is better for human consumption than energy drinks are, but unfortunately it is going to take a little time and some tweaking of the law tweaking before people will begin to understand, accept and embrace that fact. 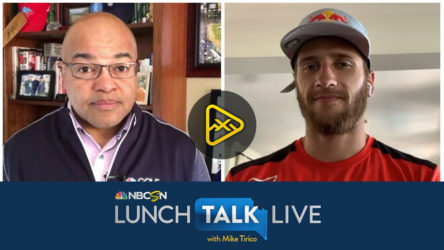