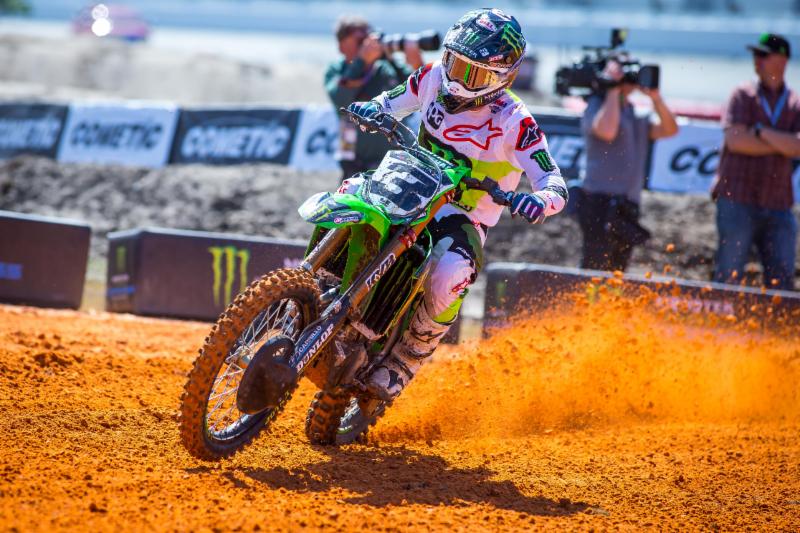 “The last half [of the race] was effortless,” Tomac said. “I just got the flow and that’s so important at this track. It just started coming to me.”

“[Title] number three … this is so cool at Daytona.”

Riders in the Monster Energy AMA Supercross were back at DIS for Round 10 of the 2019 season, on a challenging course designed by five-time Daytona Supercross champion Ricky Carmichael.

Chad Reed (No. 22 Joe Gibbs Racing Suzuki) was thwarted in his own attempt at making history, as he finished 10th in the Main Event. Reed was trying to become the third four-time Daytona Supercross champion; Jeff Stanton and Ryan Villopoto are the others on that short list.

Austin Forkner of Richards, Missouri won the 250SX Class Main Event aboard the No. 24 Monster Energy Pro Circuit Kawasaki. Forkner started the evening with a strong run in winning the first 250SX Heat Race. He ended with his fourth Main Event win of the year – and a commanding lead in the Eastern Regional 250SX Class championship standings.

“It was tough,” Forkner said about the Main Event. “Just not making mistakes was one of the biggest things; I honestly didn’t feel like I was going super fast. Just every rhythm, every jump, every lap was just perfect – that was the key tonight, I feel.”

Next weekend Monster Energy Supercross goes to Lucas Oil Stadium in Indianapolis, Indiana for round eleven of the 450SX Class and another Eastern Regional match up in the 250SX Class Championship.