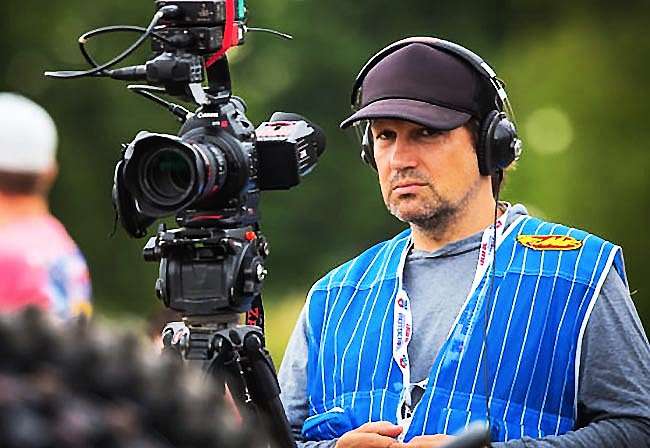 American filmmaker and moto storyteller Troy Adamitis is a name many people should know, as he is considered one of the most professional and creative guys in the sport of motocross. An eye for something many of us don’t see, and a passion that runs through his creations and tells the story of this diverse and painful sport of motocross.

From the very early Fresno Smooth in the 1990s to Supercross Behind the Dream, American Summer, The Constant War, and probably his best effort was the film sequence, The Great Outdoors, Adamitis has grown, learned and created masterpieces.

The Great Outdoors has been running now for 10 seasons and continues to show how cool the American motocross championship is, the people behind the scenes, the toughness of the athletes and the drama that unfolds each and every year.

His MX Nations sequence is also a very special look at the AMA Nationals in America. Adamitis did this sequence in collaboration with Red Bull.

Grand Prix motocross got lucky in 2018 when Red Bull started negotiations with Adamitis to do a similar thing to MX Nations but covering the FIM Motocross World Championship. Adamitis hasn’t been to Europe a lot before this latest project, but knew the history of the Grand Prix scene, and wanted the story told.

Sure enough, when the first of six episodes of MX World S1 arrived online, motocross fans around the World sat down, grabbed a coffee or a beer and walked into the World of motocross, the different cultures, the diverse circuits and the place where motocross was born.

We were really fortunate to sit down with Adamitis for a short interview at the Grand Prix of Valkenswaard, but believe me, we have already organized another longer, more detailed interview with somebody who brings out sport alive, and for that we thank him.

And the good news is, Adamitis and his small team are currently working on the 2019 version of MX World, and we can’t wait to see what unfolds. Also, take a look at some of the MX Nation and MX World films below at the bottom of this interview.

We have always looked at the American videos on motocross and marveled at what guys like you do. I think Americans tell the story of sport in general better than anyone, full of drama and obviously a great talent with the language, better than obviously a lot of Europeans. When we heard you would be making this Red Bull MX World sequence, I think everyone was excited, and if I talk to people who were involved in the making, they got very excited about seeing it. What made you want to do it?

I guess it is something when I got bitten by the sport, I got he bug, I knew that this was the grassroots of it, I knew this was the backbone, where it all started. Motocross of Nations was an event that really sparked my interest. When it came to Budds Creek, I saw the different flags, I saw the different cultures and I realized that motocross is such a universal language, it didn’t matter what language you speak, or what culture you are from, there is this line of dirt bikes and passion, and I knew I would find something special here. I also realized all my training and experience over the last 20 years would prepare me to come here and tell the story properly.

Had you been to Europe before your visits last year?

I did visit Valkenswaard in 2007, and I was just lost. The format is different, and it is funny how the American riders that come over and do this, they don’t know how to describe it, they say it’s just different. It is hard for me to describe why the word different is so often used, but it is something about the people, something about the culture, but it just kept bringing me back, especially coming back to Belgium, working with Roger DeCoster a lot and trying to find out where this all started, it has been a special time for us.

Obviously, through your videos you really tell a story A really cool story with passion and even intimacy, similar to what Eric Johnson does with his writing. But looking at you and speaking to you, you seem like an introvert. How can you do that? Are you an introvert?

I am yes, I am, I hide behind the camera. I feel a bit of a hypocrite trying to get people to tell their stories. If the camera was turned around, I don’t know how they do it, even doing this interview it is unnerving for me. I try and create a trust, like a safe place to talk about the love and the passion. You mentioned the word intimacy, but I want to find something out about the rider, or the rider’s girlfriend, or the parents, that is relatable to any parent or relationship. We are always trying to find a through line. Not why you are winning, but why are you doing it, or how did you even get here, because everyone that lines up, they all have a story. Often a wonderful story of struggle and that is what always kept me going, to try and search for that. A universal story that anyone who doesn’t even follow the sport can say, oh, ok, I get it.

So that the trick in your videos, to get those intimate stories, that really make people listen and find out the real details of the athletes’ lives. What is the secret to your videos?

That is hard to say, but I do believe, just give me a second…. Can you ask me the question again?

I mentioned Eric Johnson, who for me is the best writer our sport has ever seen, but Eric tells a story, and you feel like you are right there, watching what he is writing about. Your videos create that feeling, or actually walking through the moments of the riders and their lives.

I don’t come from a motocross background, I never raced, didn’t grow up in motorcycle, but I try and tell a story, that non-motocross people can understand, that somebody can show their friend, or their wife, a non-fan, and they understand the story and this is why I love this sport. To me it seems like I want to tell a story that will give the message about who the sport is so good. That has always been my mission. Show the side of that anyone can respect and show it as a real sport, a true sport. For 20 years I have been telling people, these motocross riders are like Olympic athletes, they put in the same dedication the same sacrifices, and they don’t just go out on the track and ride around. They don’t have all the tattoos and the earrings, they are not like the Harley Davidson guys, these motocross riders are real athletes, like marathon runners, or triathletes, the same type of people you would see winning the Tour de France.

As I mentioned you to before we started the interview, there were several times watching your video that I got goosebumps, or even tears in my eyes, did you have that at all while making or maybe watching the video?

I ask the questions and I set up the story, but I have to give credit to the writer, and the editor, his name is Nate Scribner and he can take a story and really make it shine or try and transcend what I am trying to get across. I try and make an intimate moment, and he is able to give you those chilling moments. If you can get that, and those are really difficult to get and there are a few times where I go, WOW, that is where we are trying to go. You only need one or two of those moments in a show to really make it work.

When the video came out, everyone loved it. Youthstream does some nice videos, but we hadn’t had anything like your MX World sequences. Can you improve on that for 2019?

We are trying to. I think what was lacking last year was more reality moments. We kind of set the mics under the pits and we can hear the mechanics talking to the riders. Being our first time last year, we were just getting to know everyone, and we were trying to gain everyone’s trust. What we are trying to do now is put the wireless mics that we put on the mechanics, or the team managers, because that story can tell itself and that feeling of being in the moment. I had a mic on Dirk Gruebel and I have a great moment with him and Tom (Vialle). To me, that is the lifeblood of what we do. To not do interviews, but just more reality, that is also what Red Bull is asking for and that is also our goal.

Obviously you did last year, and you will do this year. I can imagine Red Bull and KTM are really enthusiastic about it. Is this something that could be done for the next 10 years similar to your Great Outdoors films?

I hope so, it is year by year and they look at it. I would love a five- or 10-year deal, so there is no guarantee, and it forces us to go beyond and try and do better and outdo what we did last year.

I can imagine talking with you, that you would love Europe and all the cultures. Have you had some nice experiences while traveling?

Every time we get off the track and done with working, we like to go to a little café, drink some beers and soak up the atmosphere. There is nothing like it. I live in California, where everything is newer and here everything is so old school and so much history. All these places have their own brewery nearby, maybe it’s just the beer that I love (smiling).

I talked about the appreciation everyone has for you doing this, and while you also do great stuff in America, I can imagine people have seen so much of your work that it’s just like here is another film from Adamitis, while we don’t get as much of these type of motocross stories on film. How was that for you to be getting a lot of pats on the back for making these films?

The comments were really nice. I was surprised, I wasn’t sure we would do this sport justice, but it seems like it is a smaller group because it seems the views are not as much here and I hope they improve, but from that group they really enjoyed it. If people enjoy it, we want to get out there and give them more. We have a good crew and the best people back home putting it together and it has recharged my mission and my career and coming here and telling this story, will make it even better for the work we do in America because we have learned so much more about the history of the sport.