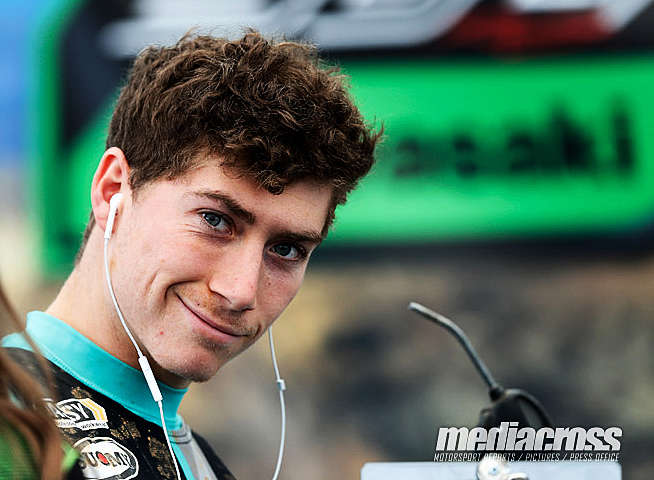 American racer Mitchell Harrison hasn’t had the easiest entry into the FIM World motocross championships. Despite a very good fifth place finish in his very first race on the Saturday of the Grand Prix of Trentino, the Bud Racing Kawasaki rider has struggled with starts ever since.

Last weekend at the Grand Prix of Portugal, that changed a little when he decided to go to softer settings and felt a lot more comfortable.

Now 11-13 for 10th overall might not have made Harrison smile a month or so ago, but after a bunch of disappointing performances, a top ten in the super deep and competitive MX2 class does give him something to work with.

We spoke with the likable American just before he began his quest for World glory, and now around two months later, he is feeling like the good results are just around the corner.

Last time we spoke, you hadn’t raced here yet. You obviously raced in Trentino, Mantova, and Agueda now. How has it been?

The first qualification race (in Trentino) went really well and I didn’t think it would be easy, but I thought it would go more like that. The starts, if you don’t get the starts it is really challenging. The whole field is pretty even, for the most part, so if you don’t get a start it is difficult to pass. Also, the tracks are a lot more one lined and not as rough, that makes it all more challenging. It is really just the starts I need.

I noticed even in the French championships the results were not that good. How has it been as far as keeping your chin up? Did you get down at all?

Yes, those two were also about the starts. I have been really trying to figure out my bike. I have been trying to run it stiffer, like for the American tracks. In Mantova the last moto I softened all my stuff up, my clickers up, but I went down, and I couldn’t get my bike starts. I was way down in the pack. For Portugal I had it soft again and I rode really well, still didn’t get the starts, but I finished top ten, which was better.

It is funny that you mention about the bike being too stiff at first because that is often what the Euro mechanics think the problem is with the Team USA riders when they race the GP guys. They say that the don’t go far enough away from the supercross set-up. How much better does the bike handle when you did go soft, but you are probably not used to that type of setting?

It is honestly better. I would like to see how it is on American style tracks. Those tracks (AMA) you pick a line and you are in it, while here you can open your corners up and that is what I am not used to. That is why the soft setting works so well because you can lean it, where there is no rut.

I can imagine that top ten isn’t what you were hoping for, but it is a lot better than the previous rounds. In Portugal you passed a lot of riders, that must give you a lot of confidence from here on in?

What is the problem with the starts?

I am a great starter and I have been since the amateurs, but we need to make some changes to the bike, and we should be good to go. I talked to the team and we are doing something that should make the starts a lot better this week.

Are you having any trouble with the metal starting grid?

No, not at all. In Supercross, we have the same grid, but I am used to the GP grids now and I have had great starts (USGP), I don’t think the problem is with me for the starts, we just need to get the bike a little bit better. I am only three GPs in, and it is a learning experience and I think it will be a learning experience all year and I will just do the best I can.

The qualification lap, usually the Aussie and American riders struggling in that, how is it for you?

The qualifying has always been a weakness for me, also in America. I struggle to do just the one fast lap. I have been working hard with that because two seconds can put you in a completely different place. It isn’t the same in America. Long hard motos I can do, my endurance has always been good, but that one lap I need to work on. I need to pin it for a lap.

I noticed you spoke with Lisa Leyland on the starting line and she asked you about living here, and you mentioned you loved it and didn’t have any problem with the culture change. How has it been?

It has been rather easy. Where I am living in France a lot of people speak English. I have been trying to learn French, but it is really hard to learn a language. Getting around is easy, the team take care of everything. The Bud Kawasaki team is really an amazing team and make it easy for me, coming over from America and no knowing anything. The transition has been nice, and I have my girlfriend over here now and that makes it a lot easier. I love it, it is beautiful here. The food is better here, and I am right on the beach, so that is great.

Last weekend was the first round of the AMA Nationals. It was a bit messy at the end, so maybe you were glad you were not there. Did you miss not being there or anything like that?

I have always loved the AMA National, especially at Hangtown. The track looked really deep and rough in the first race and that is the type of tracks I like. The rougher the better. I miss being at Hangtown for sure.

Any chance you might do a round between the GP schedule?

Maybe, if there is time and Stefan will let me. I am all for more races, so we will just have to see.

Next week you have France, which is hard pack and probably won’t be a lot of lines I imagine, then you have Russia and Latvia. Latvia you should like. Have you looked at all the tracks online?

Yes, I have looked, and I have studied all the track and I am always on MXGP.tv and that helps me study a little bit. I always have to watch video before a race, because it is kind of hard not really knowing what is going on. I didn’t grow up watching these, so I need to study.