Round 12th of the FIM Motocross World Championship got under way at the clay challenging track of Semarang where Team HRC’s Tim Gajser & Red Bull KTM Factory Racing’s Jorge Prado took home a GP victory for the second Indonesian round.

It would not be a Grand Prix of Indonesia without a huge amazed Indonesian crowd and a traditional opening ceremony featuring a typical ‘legong’ dance before the gate dropped for MXGP and MX2 riders. Following the traditional dance officials in attendance Youthstream CEO David Luongo, FIM/CMS Director Antonio Alia Portela, IMI President Sadikin Aksa and Mayor of Semarang Hendrar Prihadi, S.E. M.M. took the stage to welcome the fans and officially start the racing day. 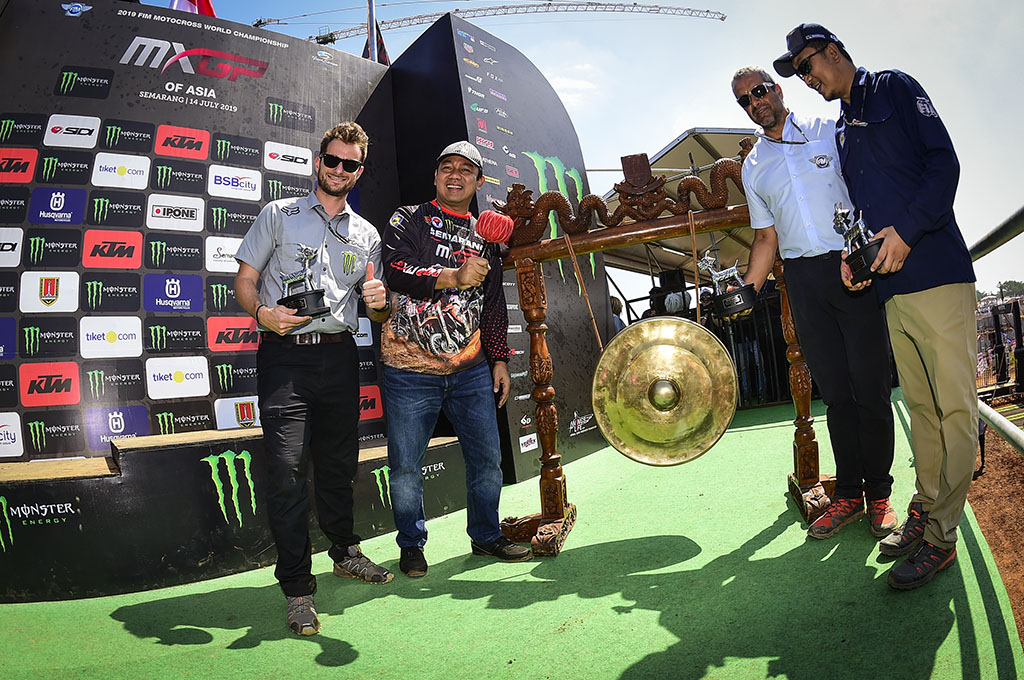 After a lap the lead by the HRC rider was more than a second and riders were swapping positions throughout the field. Team Honda SR Motoblouz’s Jeremy Van Horebeek moved into seventh, then back to 11th, and Monster Energy Wilvo Yamaha Official MXGP’s Gautier Paulin dropped from seventh to 10th.

After four laps it was Gajser with a two second lead, then Jonass, Seewer, Jasikonis and Monster Energy Wilvo Yamaha Official MXGP’s Arnaud Tonus fifth. Febvre went down hard while battling with his teammate Seewer and was forced to go out of the race after bending his front end. Jonass closed up on Gajser, but then Gajser fastened his pace and was two seconds up after six laps.

Gajser continued to control the race up front and on lap nine he was still around two seconds ahead of Jonass, with Seewer third, Jasikonis fourth and Tonus fifth while Standing Construct KTM’s Max Anstie had moved past his team-mate Ivo Monticelli for eight position.

Jonass went down hard and dropped out of the top ten with an eventual race 1 disqualification result as he re-joined the race after leaving the track for ‘outside assistance’ while Tonus managed to pass Jasikonis for third.

After 13 laps the lead by Gajser was more than six seconds over Seewer, with Tonus third, Jasikonis fourth and Standing Construct KTM’s Glenn Coldenhoff fifth. Seewer crashed up the hill on lap 14 and handed Tonus the second place. Seewer found himself in third place while Coldenhoff closed in on Jasikonis until he succeeded to overtake. Gajser would win the opening MXGP race from Tonus and Seewer.

In the second MXGP race, it was Seewer who took the FOX Holeshot out front early ahead of Gajser, Jasikonis, Jonass and Tonus. Gajser was pushing hard to get into the lead and did just that after half a lap of the race.

On lap two Jasikonis nearly crashed, but saved it, and Febvre also got sideways, but didn’t lose a position. Coldenhoff went past Jasikonis, and after three laps it was Gajser with more than two seconds over Seewer, then Tonus, Jonass, and Paulin inside the top five.

Van Horebeek crashed and dropped back to 12th position, and after four laps it was Gajser ahead of Seewer, Tonus, Jonass and Paulin. Six laps in and Gajser still held the lead over Seewer and Tonus. Tonus made a mistake and Jonass moved into third place.

Tonus wasn’t about to hand third place to Jonass and fought back and was right on the back wheel of the Husqvarna rider. Jonass moved forward Seewer and so did Tonus though. A great battle between Jonass and Tonus for second place featured the last laps of race 2. At the end of race 2 it was Gajser who won his 15thrace of the season followed by Jonass and Tonus.

Team HRC’s Tim Gajser has won the MXGP of Asia with another perfect performance and 1-1 results. With his seventh Grand Prix win in a row the red plate owner has become the most successful Honda rider of all time for GP wins in a row. He also extended his points lead to 173 points over Monster Energy Yamaha Factory MXGP’s Jeremy Seewer who is now second in the points.

Tim Gajser: “Unbelievable, I was enjoying that second race so much and that is the most important thing. I took the FOX Holeshot and I controlled the second race. I had a big crash yesterday and I got a lot of help with that from people around me. After the crash yesterday in time practice I was struggling a little bit, I had a good start in the first race, made a gap and I was enjoying it out there. I am very happy to go home safe, that is the most important thing.”

Arnaud Tonus: “We had a tough time last week in Palembang, but we rebounded today with a second place and I didn’t have a good feeling yesterday, so it is amazing for the team and it feels even better when you have struggled. I really like coming to these races, the people are so excited to see us, and we are always welcomed very well.”

Jeremy Seewer: “It is safe to say that I am now second in the championship, I saw some sketchy crashes and I didn’t want to take risk and I knew I would have been on the podium and got a lot of point. I told my practice mechanic I would bring back the black plate (holeshot award) and I did that. I look forward to the next Grand Prix’s now.”

Prado was able to move into first place on lap two, and a lap later Vialle also moved past Olsen to relegate him to third place. Rockstar Energy Husqvarna Factory Racing’s Jed Beaton was also looking strong, right behind Vialle and Olsen. After four laps the lead by Prado was more than a second over Vialle, and Olsen was a further two seconds back in third place.

Six laps in the lead was extended to two seconds between Prado and Vialle and Olsen was five seconds off the leader in third place. After nine laps Prado was still two seconds ahead of Vialle, but 10 seconds ahead of Olsen and 15 seconds ahead of Beaton. Back in fifth place Honda Redmoto Assomotor’s Mathys Boisrame was riding smoothly while Team HRC’s Calvin Vlaanderen, who was on the move, passed the French and moved into fifth place.

Geerts got back past Jacobi, but then crashed and let the German move ahead. The lead by Prado was nine seconds after 14 laps, with Vialle second and Olsen third. Prado started cruising near the end and won easily it from Vialle and Olsen.

When the gate dropped for MX2 race 2 it was Jacobi who took the FOX Holeshot and led the second race ahead of Prado and Vialle. A significant crash happened in the first corner as Olsen and Hitachi KTM fuelled by Milwaukee’s Bas Vaessen where out of the race with badly bent bikes.

Prado took the lead at the end of the first lap and behind him were Vialle and Jacobi. After four laps Prado was five seconds ahead of Jacobi, with Vialle right on the back wheel of the German rider. Vialle brushed past Jacobi and the two collided and Vlaanderen was very close in fourth place.

Team SM Action Yamaha rider Maxime Renaux moved into fifth place while Jacobi found himself in fourth when Vlaanderen passed him. Jacobi continued to drop back as Renaux passed and moved into fourth position. Vlaanderen was charging hard as he moved second after managing to pass Vialle. Renaux was also on the charge as he moved past Vialle soon after.

Renaux moved into second place as his best career result in MX2, even if Vlaanderen was pushing hard to get him back. Prado still led with 12 seconds and won his 20th race of the season from Renaux and Vlaanderen.

Jorge Prado: “I am happy about the weekend. I went first in every single session. It is a good feeling to come to Indonesia and win both races. I felt good and I enjoyed today. It is good to be on the podium, on the top step of the box. I had a very good jump out of the gate in the first race, but I braked too much and two guys passed me. I made a pass early on Olsen and I am enjoying the track way more today. I was looking forward to the second race and it was a good one, I pulled away and put it in cruise control. I had some sketchy moments so I took it easy as I felt a little dizzy”

Tom Vialle: “It is good for the team and all the hard work. Second again on the podium, it is fantastic, and I am very happy. The first race was good for me following Jorge, but then I made a mistake. The second race I didn’t have a good rhythm and I just tried to control myself to be sure to be on the podium.”

Calvin Vlaanderen: “First podium of the year. It feels good to be back and I didn’t expect it as it is just my second race back. I recovered well during the week. Renaux was riding really well and he was catching me, then I started thinking of the podium and he passed me. I want to thank the team for being behind me and also my girlfriend and everyone back home. We spent some time in Bali between the races and I got to do some surfing and really enjoyed that. I enjoy coming to these races, but am looking forward to heading back to Europe too.”

Complete results can be found HERE

All Photos from the MXGP of Asia can be found HERE