How USA Should Prepare for 2019 MXoN in Assen

RFX KTM rider Shaun Simpson gave an amazing look at what it takes to ride the Assen circuit, and also some advice for Team USA on preparation for the event. These comments are taken from an MXLarge interview with Shaun today, but the comments are so interesting we decided to give it some extra coverage.

Obviously countries will start selecting their riders in the next couple of weeks, so keep and eye out for that information.

Question: I nearly feel like I need to apologies for talking about the des Nations in July, but as we are on the topic. That circuit, Assen, it seems like Lommel on cocaine or heroin. It gets so rough, but really an untidy rough, not really like a lot of other sand tracks. Having won there in the past, can you explain to me what that circuit is like?

Simpson: “You know what makes it (Assen) really tough. It is so narrow. I think a normal GP track, and I don’t know the rules or regulations, but is normally around eight to 10 metres, while Assen in some places is like five or six metres wide. For racing in sand, that doesn’t make much difference, because you can easily pass with two good lines, but what it does create is a heightened racing area, so the track roughs up way faster. Because the track is built just days before the event, the sand is all soft. So, where some sand tracks are pummelled year after year and although they do rip the surface, it still gets old and compact and hard holes in there, but Assen it is bottomless until it hits the concrete, and sometimes it does. It is so deep and so natural; it is like riding on the beach for the first time and you can carve a new line anywhere you want. The only thing on the sketchy side is if you run off the track, but in saying that, I like the concept, I like the race, I like the surface and I like riding around there. I like the atmosphere with the crowd in the grandstand and I think it will be an amazing atmosphere. Is it for everyone, probably not, but I really like it.”

Question: Obviously there is a lot of talk about how Team USA will go at Assen, because they will have never ridden anything like this, and I am not sure there is a circuit like this in the World. Last year they struggled against the GP guys at Redbud, so it won’t be easy for them in Europe. If you were Team USA, how would you prepare for this race? I have heard there are a few tracks in the north of Holland with a similar type of white sand.

Simpson: “Well, firstly, the Americans get a bit of a stick, and they are fantastic guys and fantastic riders. They will give 100% and who knows, they might do okay, but it is a tricky track and we know how to ride it and we know how to prepare for it. Like you said, you nearly need to go somewhere that is nearly not even a track—maybe just a bit of wasteland, bottomless deep sand, that gets really rough. I have seen some videos online of guys in America training on those types of tracks. To be honest, you have to go and spend two or three weeks there for the event. There is no point in flying over the week before the race and say we are going to the north of Holland to prepare for this race and set our bikes up. I am a great believer, if you have a race in three weeks, it is the work you put in in that three weeks that will prepare you. Not starting in two weeks, or one week before the race. I am sitting in my living room and I know the work I have done over the last couple of weeks for Lommel has me prepared, and it isn’t like a week before Lommel I can do my work for that race. They shouldn’t underestimate the work that is needed coming into this event, but for them, that is difficult, because they have just come off a busy supercross and motocross season. And then they want to take down time, but then they still have the des Nations, and two 35-minute motos around Assen is going to take somebody who is in peak condition to win. That is the prep that goes into winning those races. It will be tough but find a bottomless track and get your bike set-up and look at how we set our bikes up for these conditions. 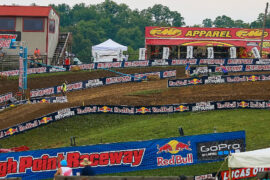 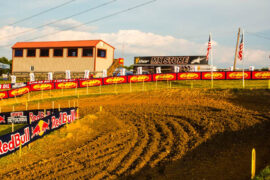