The Lucas Oil Pro Motocross Championship, sanctioned by AMA Pro Racing, made its annual visit to Budds Creek Motocross Park in Southern Maryland on Saturday, for the 30th running of the GEICO Motorcycle Budds Creek National. The penultimate round of the 2019 season saw Monster Energy Kawasaki’s Eli Tomac sweep both motos to clinch his third consecutive 450 Class title, becoming just the fourth rider in history to achieve that impressive feat. The triumph also gave Tomac his class-leading fifth overall victory of the season. In the 250 Class, Troy Lee Designs/Red Bull/KTM’s Shane McElrath proved to be unstoppable as he swept both motos for his first win of the season.

The first 450 Class moto got underway with Rocky Mountain ATV/MC-KTM-WPS rider Justin Bogle emerging with his second MotoSport.com Holeshot of the season over Tomac and Rockstar Energy Husqvarna Factory Racing’s Zach Osborne. Tomac immediately pushed his way to the front as he blasted around Bogle to lead the opening lap. Team Honda HRC’s Ken Roczen once again used incredible speed to start the moto and blitzed his way towards the front into second, followed by Bogle.

Tomac dropped the hammer early in an attempt to break away, however, Roczen refused to let his rival go by upping his pace to keep Tomac in sight. With the leaders well out front, Red Bull KTM Factory Racing’s Marvin Musquin was on the move, latching onto the rear fender of Bogle and eventually taking control of third on Lap 5. Tomac’s pace proved to be too much for Roczen to maintain as the race wore on, and the German lost ground in the second half of the 30-minute-plus-two-lap moto. 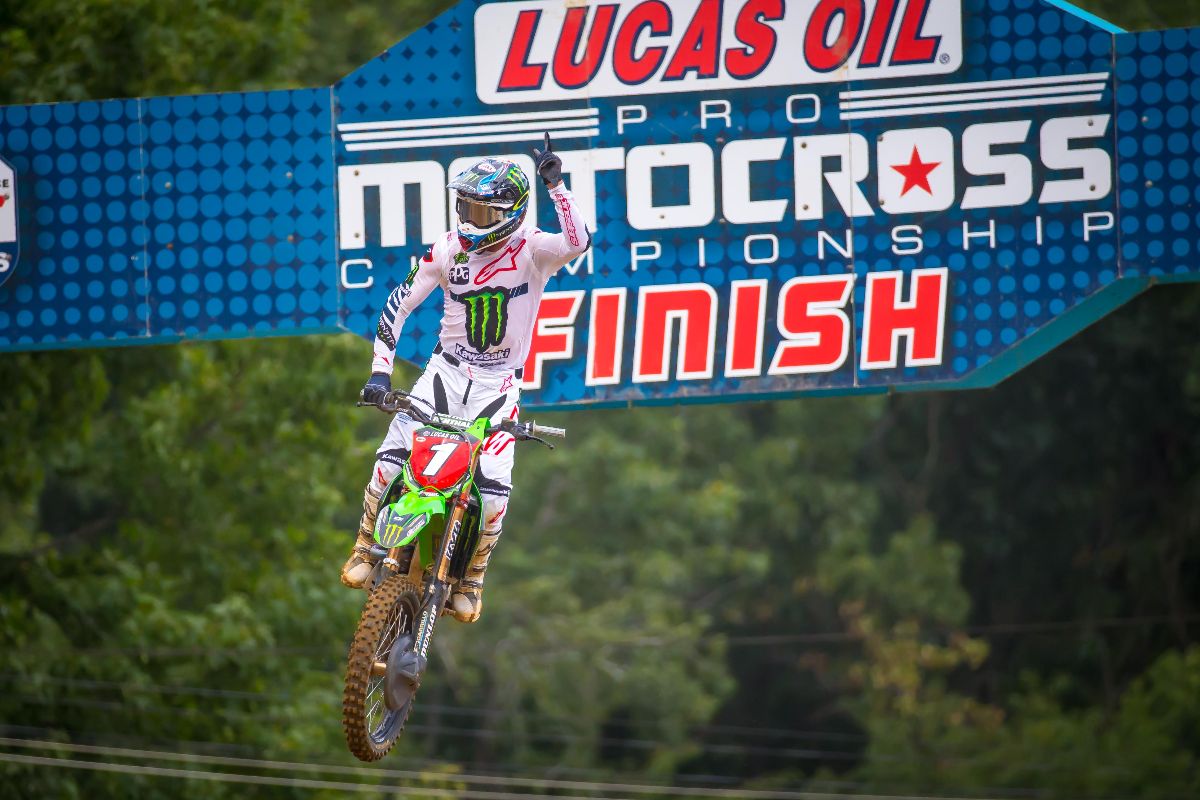 There was no stopping Tomac as he disappeared to take a commanding win by 13.9 seconds over Roczen. It marked the ninth moto win of the season for the multi-time defending champion. Musquin completed the podium in a distant third.

As the 450 Class field exited the first turn to start Moto 2 it was Osborne who narrowly edged out Tomac for the MotoSport.com Holeshot, just ahead of Roczen and Musquin. The lead for Osborne was short lived as Tomac powered his way to the front before the second turn. When the 40-rider field completed the opening lap it was Tomac, Roczen and Osborne out front.

Similar to the opening moto, Tomac and Roczen set the pace early and moved out to a comfortable gap on the riders that followed them. On Lap 2, Osborne’s Rockstar Energy Husqvarna Factory Racing teammate Jason Anderson found his way by for third, while Musquin dropped Osborne another spot to fifth just moments later. Anderson’s march to the front continued as he began slowly closing in on Roczen, eventually taking control of the runner-up position on Lap 9. Roczen continued his charge from third. 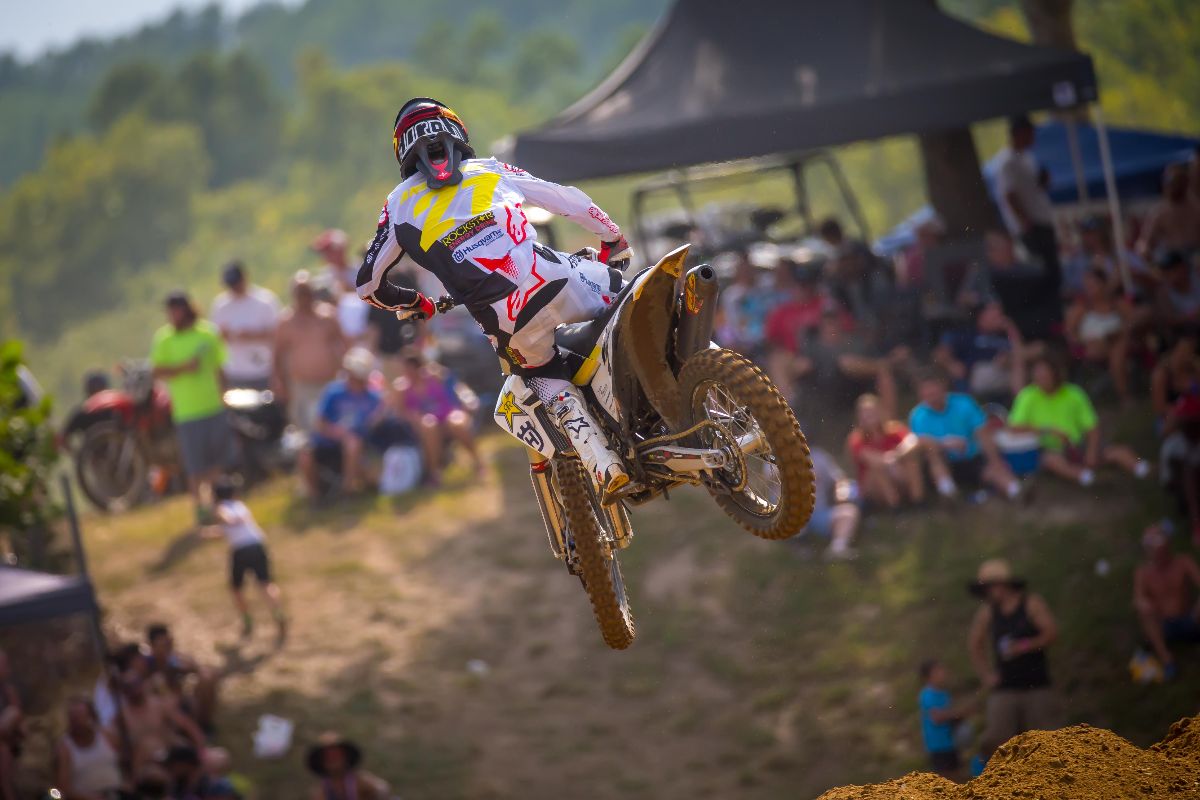 Based on the running order in the waning minutes of the moto, Tomac had yet to move into a position to clinch the title. Roczen’s hold on third was enough to keep him within 49 points of Tomac in the championship standings, as the reigning champ needed a lead of 50 points to secure the title a round early.

With the racing closing in on the 30-minute mark, Roczen began to drop off of the pace, which allowed Musquin and several other riders to close in. Roczen’s title hopes were in serious jeopardy when Musquin began a challenge for the position on Lap 12. The German didn’t put up much of a fight, and Musquin took over third. Roczen proceeded to lose two more positions on the same lap.

Tomac left his rivals well behind to easily take his 10th moto win of the season by 14.9 seconds. Anderson finished runner-up for his fifth moto podium of the season, followed by Musquin in third. Roczen ended the moto seventh.

Tomac’s fifth win of 2019 came via his third 1-1 sweep of the season. The 22nd victory of his career moves him into a tie with Rick Johnson for fourth on the all-time 450 Class wins list. 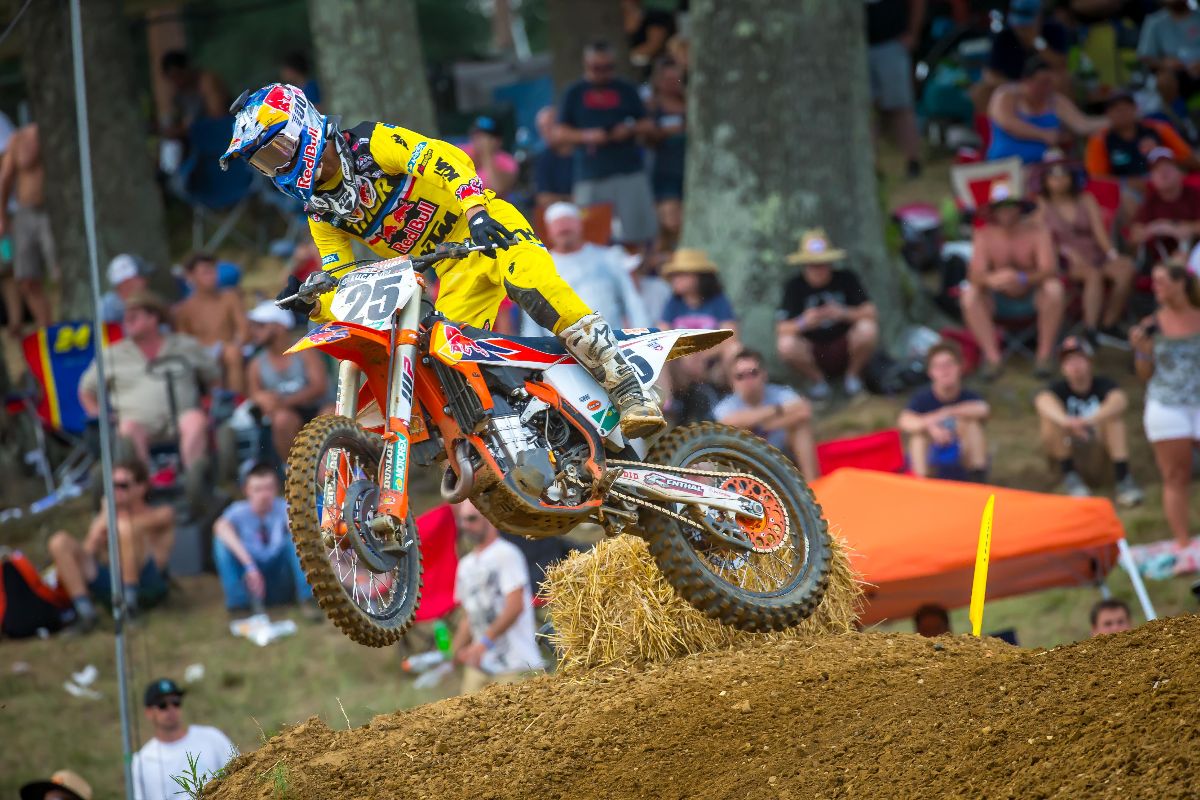 In terms of the championship, Tomac’s win, combined with Musquin’s third-place finish in Moto 2, left Tomac with an exact 50-point advantage over the Frenchman, who overtook Roczen for second in points in the final moto. With a potential season-ending tiebreaker already locked up in his favor, Tomac captured the Edison Dye Cup for the third year in a row, and did so a round early for the first time in his career. He joins Gary Jones, Tony DiStefano and Ricky Carmichael as the only riders in history to achieve the championship three-peat.

“This is such a special way to end the weekend, and not something I really anticipated happening with one round to go,” said Tomac. “I honestly didn’t even know I had the championship until the last lap. I thought that I needed one more spot from the guys behind me, so that was a little bit of a surprise. It was good to get the job done today. It’s tough to beat the first championship, but they’re all special and unique in their own ways.”

Anderson’s 4-2 scores were good enough to finish the day second overall, edging out Musquin in third (3-3).

While Tomac has wrapped up the 2019 title, currently holding a 50-point lead in the standings, the battle for runner-up in the championship will head to the final round, with Musquin and Roczen separated by five points.

The opening 250 Class moto of the afternoon saw Monster Energy/Star/Yamaha Racing rookie Ty Masterpool capture his second MotoSport.com Holeshot of the season ahead of McElrath and Monster Energy/Pro Circuit/Kawasaki’s Adam Cianciarulo. A quick move by Cianciarulo allowed him to take over second from McElrath, following Masterpool across the line to complete the opening lap. Cianciarulo’s championship rivals, and Monster Energy/Star/Yamaha Racing teammates, Justin Cooper and Dylan Ferrandis started the race outside of the top-10 and top-20, respectively. 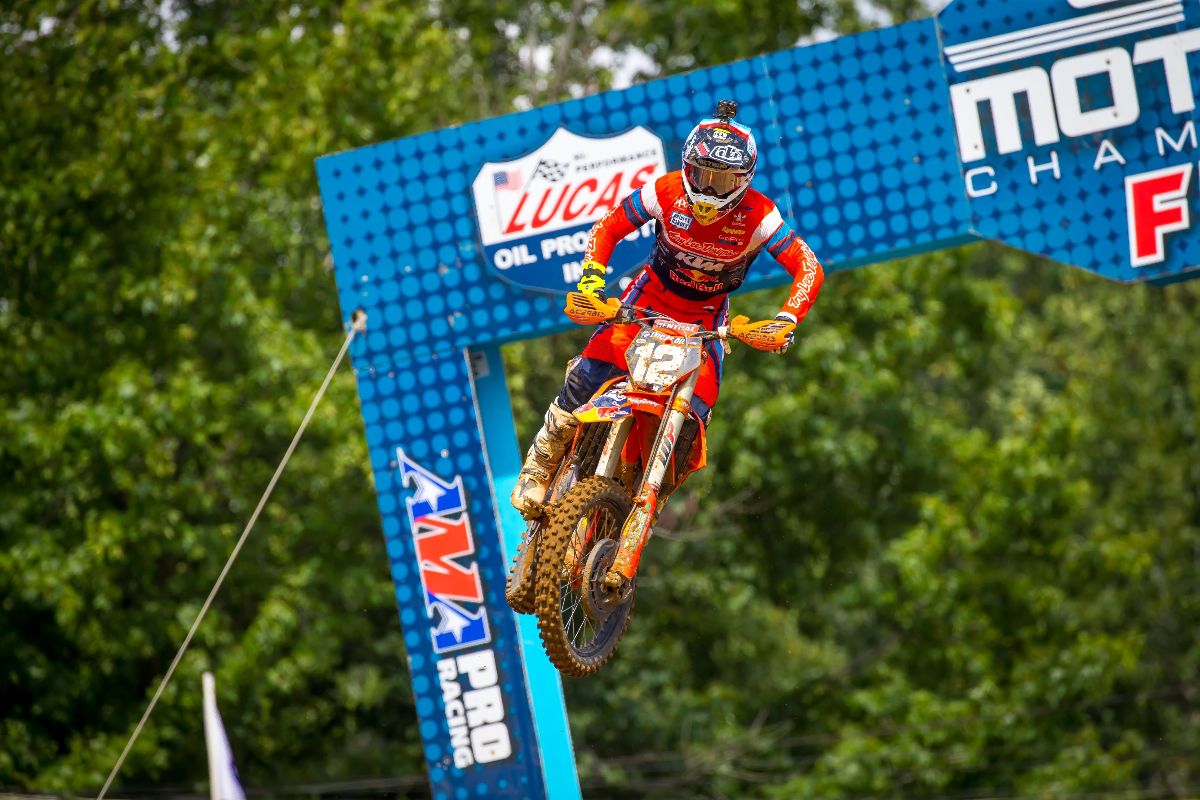 McElrath swept both motos to capture his first overall win of the 2019 season.
Photo: Rich Shepherd

With Masterool riding well at the front of the field, Cianciarulo applied pressure early until an off track excursion cost him several positions on Lap 2, from which he reentered the race in fifth. McElrath and Monster Energy/Pro Circuit/Kawasaki’s Martin Davalos took advantage of Cianciarulo’s mistake to inherit the second and third spots. McElrath began closing in on the race leader and used an aggressive move on Lap 5 to take the lead from Masterpool.

McElrath quickly went to work out front and instantly began to open a gap over his fellow competitors, while Cianciarulo regrouped and started working his way back through the pack of riders ahead of him. Cianciarulo successfully battled back inside the top three on Lap 4, and then forced his way by Masterpool for second on Lap 9. Just moments later, Rockstar Energy Husqvarna Factory Racing’s Michael Mosiman also found his way around Masterpool, taking over third.

As McElrath and Cianciarulo remained in control of the top two spots, the battle began to heat up for third as GEICO Honda’s RJ Hampshire started to bridge the gap on Mosiman. Hampshire, who won the Budds Creek National one year ago, was on a mission and pushed Mosiman out of the way for third on Lap 13.

When the checkered flag waved it was McElrath who put in a dominant performance to take his first moto win of the season by 8.7 seconds over Cianciarulo. Hampshire held on for an impressive third, giving him his third moto podium of 2019. Ferrandis’ hard charge from deep in the field carried him to fourth, narrowly missing out on the podium, while Cooper followed just a couple positions behind in sixth.

The deciding 250 Class moto saw McElrath lead the field through the first turn for the MotoSport.com Holeshot, with Monster Energy/Star/Yamaha Racing’s Mitchell Oldenburg and JGR/Yoshimura/Suzuki Factory Racing’s Alex Martin in tow. McElrath and Oldenburg went back and forth on the opening lap, with McElrath eventually taking the upper hand. A wild start to the race saw Cianciarulo just inside of the top-10, while Ferrandis was outside of the top-20. Hampshire found himself down in a first-turn pileup. 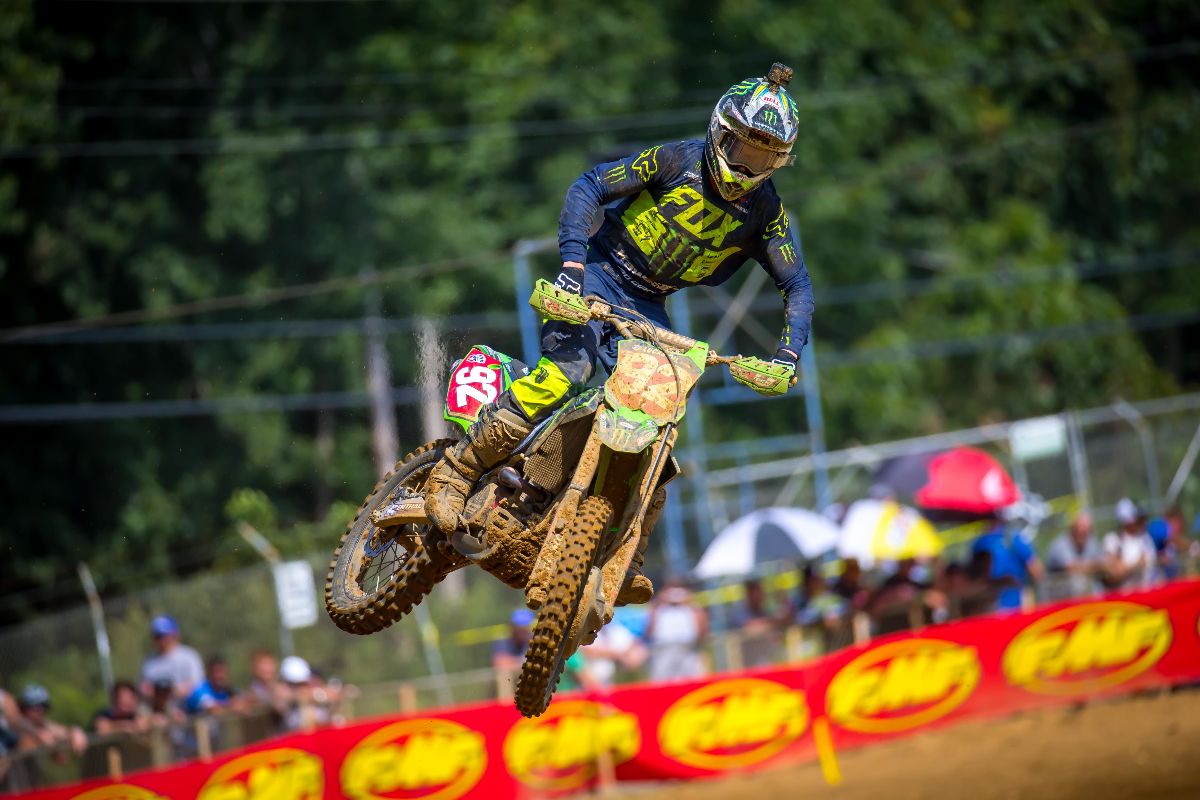 Cianciarulo was second on the day and extended his championship lead to 30 points.
Photo: Rich Shepherd

McElrath continued his impressive riding out front, while Oldenburg and Martin continued giving chase. Martin grabbed a handful of throttle and charged to the inside of Oldenburg to steal second while coming down Henry Hill. Oldenburg continued to lose ground as Cooper, who started fourth, snuck around his teammate for third. Cooper’s pace allowed him to catch Martin late in the moto, where the Yamaha rider successfully made the pass for second.

In their quest to come through the pack, championship rivals Cianciarulo and Ferrandis soon found themselves next to one another on the track. As they fought their way forward through the halfway point of the moto, Ferrandis pulled the trigger on a pass and initiated slight contact with Cianciarulo, forcing the point leader to briefly halt his momentum as Ferrandis surged ahead. The duo would continue gaining positions, with both eventually making their way into the top five.

Just like the first moto, McElrath remained unchallenged out front and took the victory by 7.7 seconds over Cooper. Martin rebounded from a difficult first moto to take his fifth moto podium of the season in third. Ferrandis and Cianciarulo crossed the line fourth and fifth, respectively. Hampshire recovered from his first-turn incident to take eighth.

The 1-1 scores by McElrath marked just his second and third career moto victories, and capped off what was undoubtedly the best race of his career. The KTM rider did not win either moto en route to his first-career victory last season.

“It’s been a true test to my fate this season,” said McElrath. “The results haven’t been what we wanted, but we never gave up and just kept at it and giving it our best. The conditions were brutal today and this feeling is crazy. It feels really good to get it done and walk away with the overall win today.”

Despite a difficult second moto in which he failed to finish inside the top three for just the third time this season, Cianciarulo still managed to grab second overall on the day (2-5), while Cooper completed the podium in third (6-2). 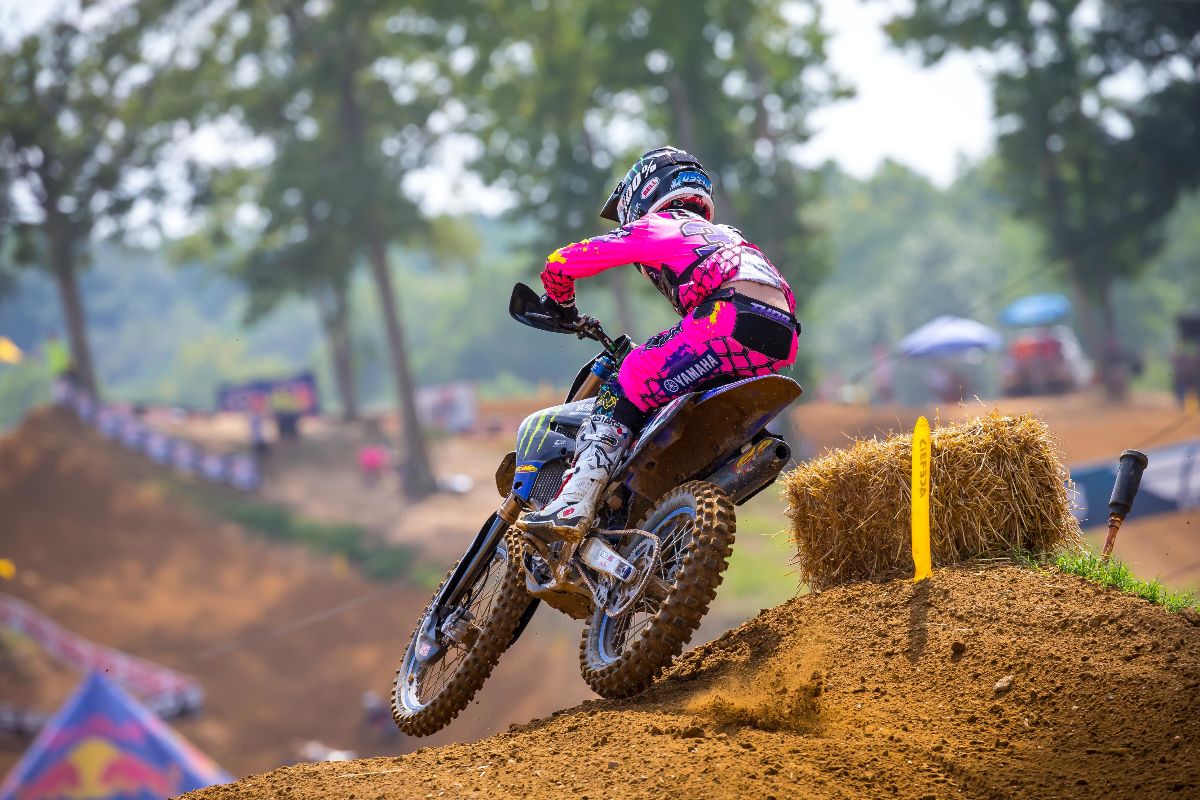 “My mentality is just to do the best I can every moto,” said Cianciarulo, who is the only rider in Pro Motocross to finish on the overall podium at every round this season. “It’s nice to have a little cushion heading into the final round, which definitely takes some pressure off. Ironman [Raceway] is a track that I feel like suits me well, and I just want to go in there and have the goal to go for another win.”

Cianciarulo extended his lead in the championship by two points over Ferrandis and now holds a 30-point advantage heading into the final round in what will be a two-rider showdown for the Gary Jones Cup. Cooper effectively clinched third in the championship with his podium result and sits 60 points behind Cianciarulo, eliminating the Yamaha rider from title contention.

The 2019 Lucas Oil Pro Motocross Championship will host its final round of the season next Saturday, August 24, from Ironman Raceway in Crawfordsville, Indiana, less than 50 miles from famed Indianapolis Motor Speedway. First moto coverage of the STACYC Stability Cycle Ironman National will be shown live on MAVTV at 10 a.m. PT / 1 p.m. ET, while second moto coverage will be aired via tape delay on NBC Sports Network at 8 p.m. PT / 11 p.m. ET. Additionally, all of the action can also be live-streamed with the “Pro Motocross Pass” via the Gold channel on the NBC Sports app. 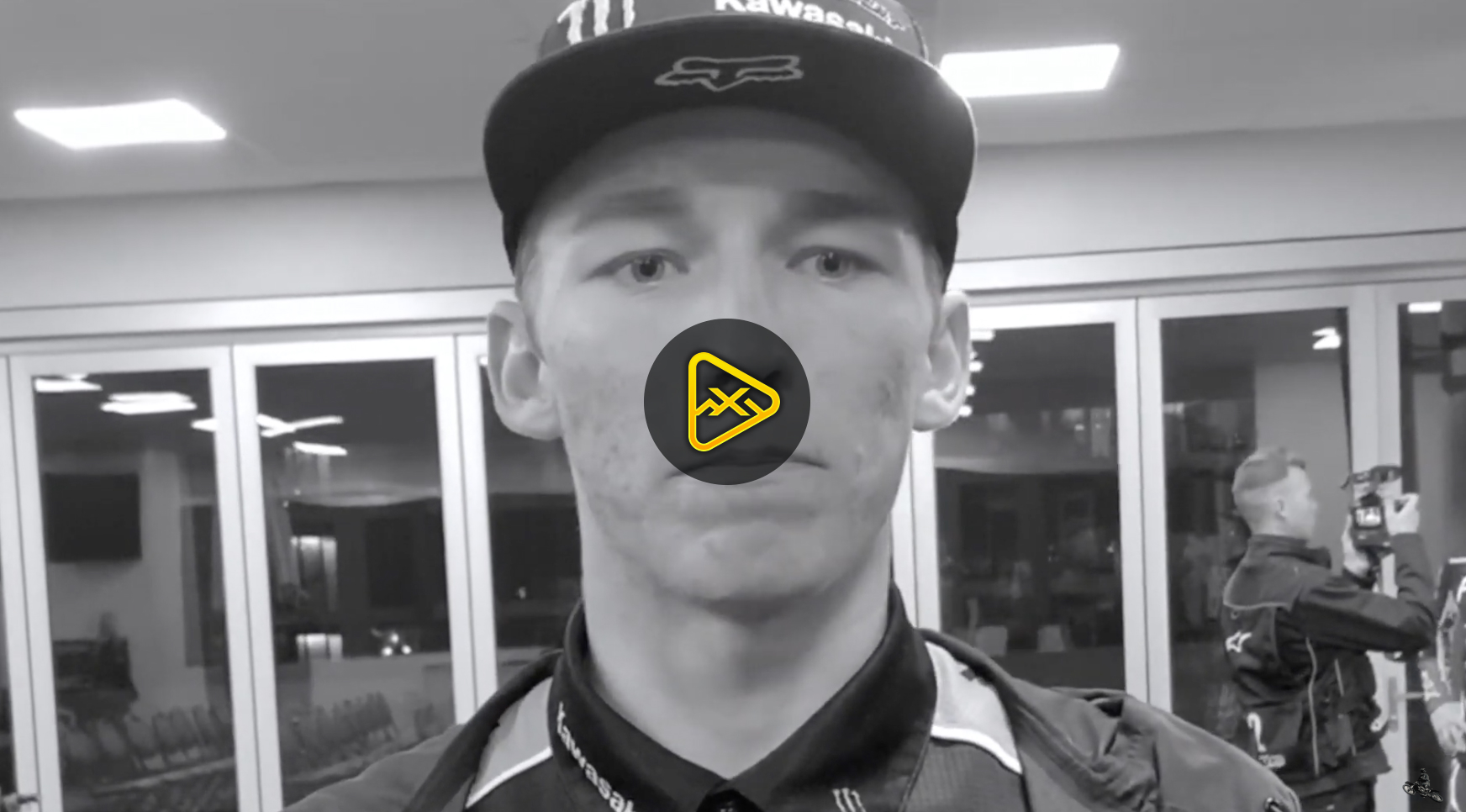