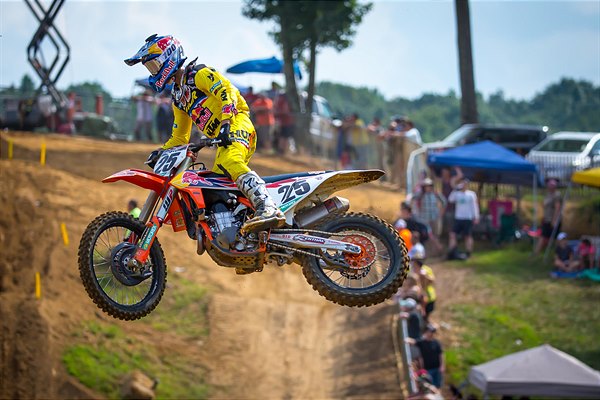 MECHANICSVILLE, Md. – It was a solid day all-around for Red Bull KTM Factory Racing’s Marvin Musquin, who claimed third overall in the 450MX class at Saturday’s penultimate round of the 2019 AMA Pro Motocross Championship at Budds Creek MX Park in Mechanicsville, Maryland.

In 250MX action, Troy Lee Designs/Red Bull KTM’s Shane McElrath earned his first overall victory of the season with an impressive 1-1 sweep at Round 11. McElrath elevated his performance on Saturday to dominate the competition amid the hot and humid temperatures.

Qualifying second overall earlier in the day, Musquin set a positive tone to the race day. In Moto 1, he put himself in good position off the start as he battled closely for a top-five spot early on. He quickly passed his way into fourth on lap two and continued charging as he positioned himself in podium contention in third. He then set his sights on the second-place battle but late in the race he made a mistake and clicked neutral – tucking the front end and losing his chance to battle for second. In Moto 2, Musquin had another great jump off the start as he battled for the lead position heading into the first turn. However, he came together with another rider and it shuffled him back a couple positions to fifth on the opening lap. He quickly passed up to fourth and battled his way back into podium contention. With five laps to go, Musquin upped his pace again to overtake third, where he scored 3-3 finishes on the day for third overall.

Musquin: “I had good practices today and the motos got rougher, harder and drier, which made it more difficult on the body and on the bike. My starts were actually pretty good but things happened in both motos that cost me a couple of positions early on. Overall, I gave my best and we just need to work a little more for those types of conditions.”

Musquin’s teammate, Cooper Webb, did not line up at Round 11 as he continues to recover from a left knee bone contusion that he sustained during a crash in Moto 1 of the Unadilla National. Webb will also miss the final round of the 2019 AMA Pro Motocross Championship.