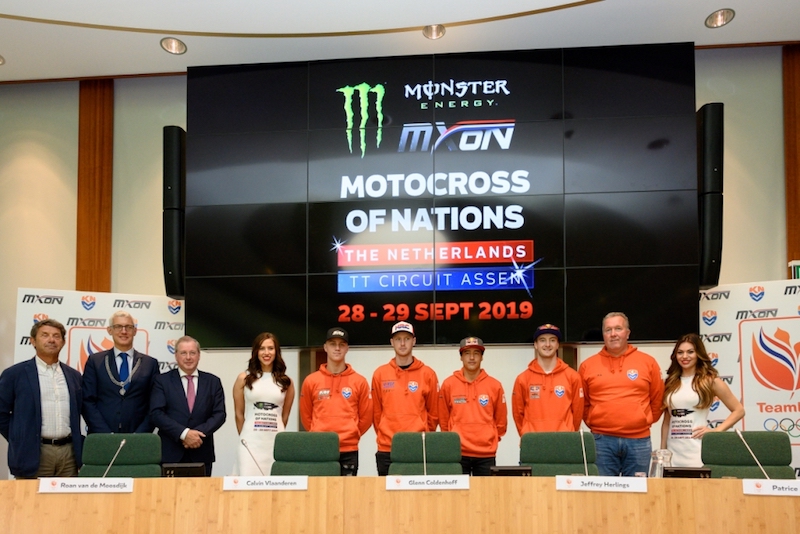 Today a presentation press conference was held at the regional Parliament palace of Drenthe, Netherlands where the Organizers of the 2019 Monster Energy FIM Motocross of Nations Lee Van Dam and Theo Verdegem, Youthstream Representative Guido Becchis and local politicians such as Mayor of Assen Marco Out and Regional Deputy Mr. Tjisse Stelpstra were in attendance to give more details on the 73rd edition of the Monster Energy FIM MXoN to local and national media.

During the conference also the Netherlands Squad has been presented; after the great achievement Team Netherlands reached at the 2018 Monster Energy FIM MXoN, the Dutch Federation had the pleasure to present the line-up which stood at the second step of the Podium in Red Bud; Team Manager Patrice Assendelft presented Jeffrey Herlings and Glenn Coldenhoff, two of the best Dutch riders ever. Herlings, who was injured for most of 2019, is recovering to be in full shape for the event, while Coldenhoff has great confidence this season and especially after winning his first GP of the season in Imola.

Member of the team will be Calvin Vlaanderen who showed great speed lately and the surprise of 2019 season, the young rider Roan Van de Moosdijk. The four riders will make some tests on deep sandy tracks in the next days and the final team will be chosen and announced shortly.

In 1954 the region of Drenthe was home of MXoN for the very first time and it was organized by Motoclub Assen, since that moment Team Netherlands finished on MXoN podium 13 times but has never taken the victory. In 2016 Team Netherlands took its first podium in more than 15 years, repeating the accomplishment in both 2017 and 2018. Team Netherlands is fully motivated to win its first ever Monster Energy FIM MXoN in Assen this September and make the history.

Don’t miss the pinnacle of the MX season which is taking place in September 28th and 29th at TT circuit in Assen, click HERE to purchase your ticket.