Lechien, Caselli and Others Inducted into AMA Hall of Fame 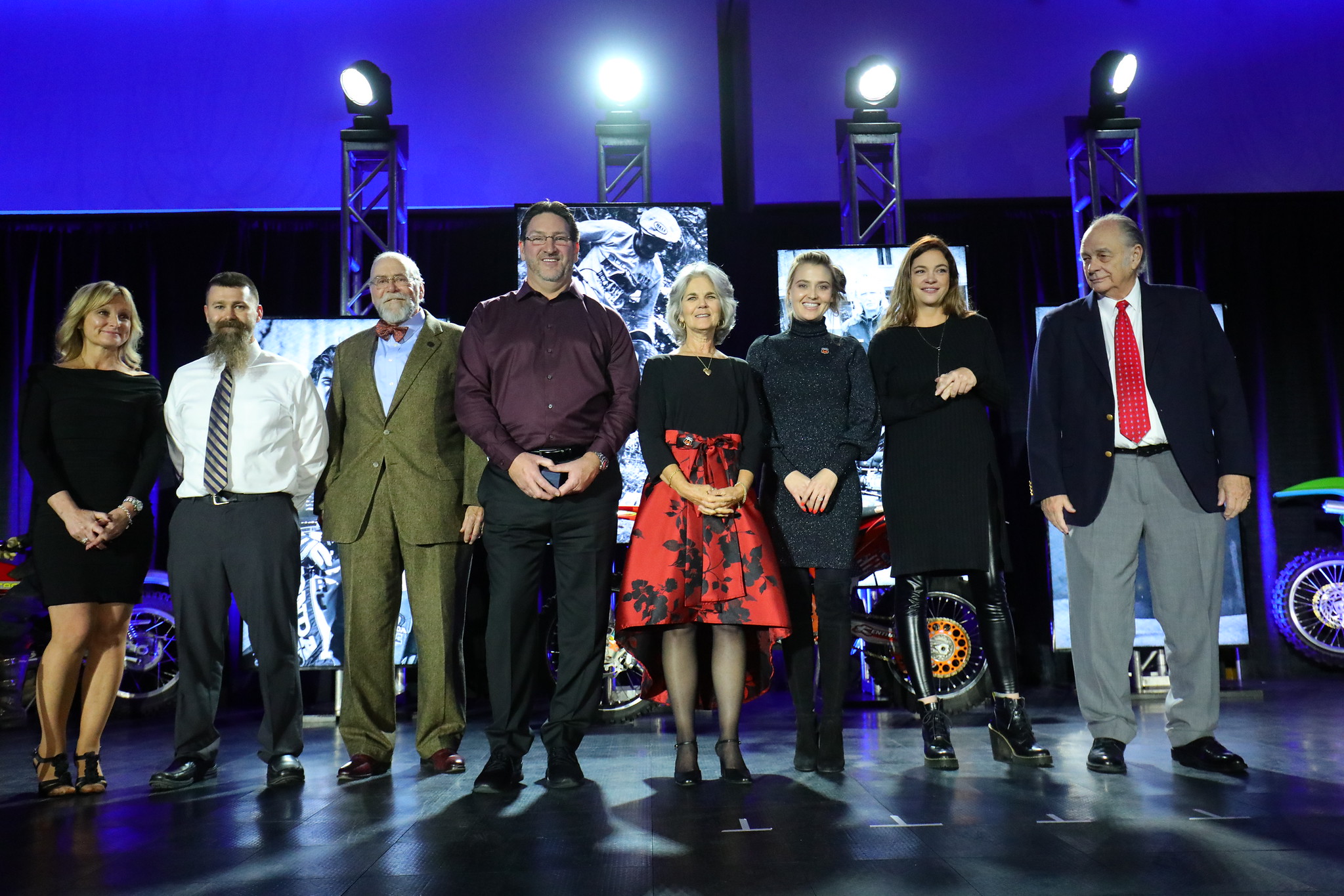 Ceremony emcees Perry King and Laurette Nicoll guided the audience through the careers and accomplishments of the inductees.

“Each of these motorcyclists has achieved excellence in pursuit of their motorcycling dreams,” King said. “And each one of them has inspired generations of riders to do the same.”

During the ceremony, those gathered also honored the memories of AMA Motorcycle Hall of Famers who recently passed away: Jerry Branch, Arlen Ness, Gene Romero, Peter Fonda, and Clark Collins.

The AMA Motorcycle Hall of Fame Class of 2019
Following the introduction of each new inductee, there was a brief, formal induction ceremony conducted by American Motorcycle Heritage Foundation Board Chair and AMA Board Member Ken Ford, who chairs the AMA Board’s Hall of Fame Committee. The inductees or their friends and family members then addressed the audience.

Kurt Caselli
Kurt Caselli, whose father Rich was an active member of AMA District 37’s Prospectors Motorcycle Club, started winning at an early age. In 1998, at age 15, Caselli won the desert championship in his class. In 2000, he won an amateur championship in three disciplines: enduro, desert, and Grand Prix.

Caselli soon took his talents overseas, participating in the FIM International Six Days Enduro on the official U.S. team. He competed in the ISDE for 12 years. Eight times Caselli was the top-finishing American rider, and he won his class twice. Caselli was on the winning U.S. Junior Trophy Team in 2006, and he was on the U.S. World Trophy Team in 2013 when the team finished second, matching its best finish in the event at that time.

Riding for the factory-backed KTM team, Caselli committed full time to the AMA National Hare and Hound Championship Series in 2011 and won the title. In 2012, he successfully defended his title before repeating that performance in 2013.

Caselli’s focus then shifted to international rally racing. In 2013, he finished strong in Dakar and won the Desafio Ruta 40. His final race before making the full leap to rally racing would be the SCORE-promoted Baja 1000.

Tragically, Caselli died in that race, colliding with an animal while competing and suffering fatal injuries.

While Caselli is remembered for his incredible skill and talent on an off-road motorcycle, his most lasting impact may be his role, inspired by his father, in fostering a deep sense of team, dedication, and patriotism among U.S. riders competing at the ISDE. Those efforts paid off in 2016 when the U.S. World Trophy Team finally won the World Trophy, an achievement that had eluded American riders since the event began in 1913.

“Kurt was blessed to have traveled far and wide throughout his career, living life to the fullest and making lots of friends and memories in his 30 years,” Nancy Caselli said. “While I am proud of Kurt’s motorcycle career, championships, accomplishments and accolades, I am most proud of the son and man Kurt Caselli was.”

Caselli’s fiance Sarah White added, “I don’t know if there are words for how proud I am, and how sad I am that he can’t be here to do this himself. This would have meant the absolute world to him.”

Wiltz Wagner
Wiltz Wagner Jr. has tirelessly promoted the sport of observed trials in the U.S. the last four decades.

Wagner was first a fiercely competitive and successful trials rider in the 1960s and 1970s and then formed Colorado’s Rocky Mountain Trials Association, one of the oldest AMA-chartered trials clubs in America.

In the early 1970s, Wagner saw a need for a national organization for trials competitions. Working with the AMA, Wagner created and oversaw the North American Trials Council. For the past 46 years, the NATC series, sanctioned by the AMA, has crowned the sport’s national champion.

In 1975, The Rhode Island Trials Club worked with Wagner and the NATC to host the first World Trials Championship in Rhode Island. Since then, the NATC has arranged dozens of international events.

Wagner, who was inducted into the NATC Hall of Fame in 2005 for his contributions to trials, has competed and won in other disciplines, including ice racing and land-speed racing, where he, his late wife and his daughter hold more than 50 records.

“This is the greatest honor of my life,” Wagner said. “I’ve thought a lot about it, and I’m 0.1 percent of this huge thing [the North American Trials Council]. But, I was the first 0.1 percent, and out of that grew this enormous organization that’s so successful.”

Mark Buckner
Mark Buckner began his leadership in motorcyclists’ rights advocacy in the late 1980s as the state coordinator for ABATE of Colorado. In 1992, Buckner joined the Motorcycle Riders Foundation board of directors, becoming MRF president and chairman two years later. During his tenure, the MRF implemented strategic planning processes that led to the organization’s financial stability and significant growth.

Buckner continues to have a profound influence in the motorcyclists’ rights community, giving seminars throughout the United States on strategic planning, organizational design and member effectiveness. Over the past 25 years, he has delivered more than 100 presentations around the country at state, regional and national rights conferences.

Buckner was not able to be in attendance. Former AMA Board of Directors chair Rick Gray accepted the honor on Buckner’s behalf.

“I’m proud to be an inductee into the AMA Hall of Fame this year,” Bucker said in a recorded video segment. “I want to thank the folks who supported my candidacy. I really do appreciate it. I think about all the great motorcycle rides I had over the years with my friends; the wonderful places I’ve been to; experiences I’ve had; and how lucky I am to have been able to do that. I want that same thing for my kids, my grandkids, my friends and for anybody who loves motorcycling the way I do.”

In 1999, Walksler sold the dealership and relocated his motorcycle collection to Maggie Valley, N.C. The new museum opened in 2002. Dale’s Wheels through Time Museum sets itself apart from most other museums by featuring motorcycles in running condition.

The museum’s popularity has earned Walksler appearances on several television programs about vintage car and motorcycle restoration, including “American Restoration,” “Chasing Classic Cars,” “American Pickers” and his own show “What’s in the Barn?”

Those shows helped popularize vintage motorcycling, as well as put forward a positive image of the motorcycling lifestyle.

Walksler was not able to be in attendance. His wife, Trish, and son, Matt, accepted the honor on his behalf.

“Motorcycles are my life passion, and this honor is a lifetime dream come true,” Walksler wrote. “I am humbled to have my name added alongside so many of my heroes at the AMA Motorcycle Hall of Fame.

“Back in 1977, I chased my passions and bought a small Harley dealership in a small town not too far from here,” he wrote. “I could never have imagined, even in my wildest dreams, that I would one day be inducted into the AMA Hall of Fame. Or that I will, forever, be linked with the greatest names in motorcycle history. Thank you again.”

Ron Lechien
El Cajon, Calif., native Ron Lechien competed against some of the greatest motocross racers in history throughout the 1980s, winning 26 nationals and the 1985 125cc AMA National Motocross Championship.

Lechien’s natural talent and smooth riding style made him unmistakable on the track. His seemingly effortless speed translated across classes, and he earned wins in 125cc, 250cc and 500cc motocross competition, as well as in 250cc Supercross, the premier class at the time.

Lechien, born Dec. 13, 1966, won the 1985 125cc AMA Motocross Championship and was without question one of the era’s top riders. Lechien finished in the top three in national points 10 times out of the 18 series he contested full time. Lechien raced 158 races in his career and made the podium in 80 of them. Over half the time he raced, Lechien stood on the podium among some of the greatest American racers of all time.

Lechien, who raced for the Kawasaki, Yamaha and Honda factory teams throughout his career, also competed in the 1984 and 1989 U.S. Motocross Grand Prix, collecting two wins.

While a severely broken leg in the 1989 500cc AMA National Championship Series ended Lechien’s career prematurely, he is remembered as one of the top riders from one of the most competitive eras of the sport.

“It’s just a huge honor,” Lechien said. “It’s something I’ve been thinking about. I’ve been on the ballot for three years and finally, I got in. It’s a huge relief.”