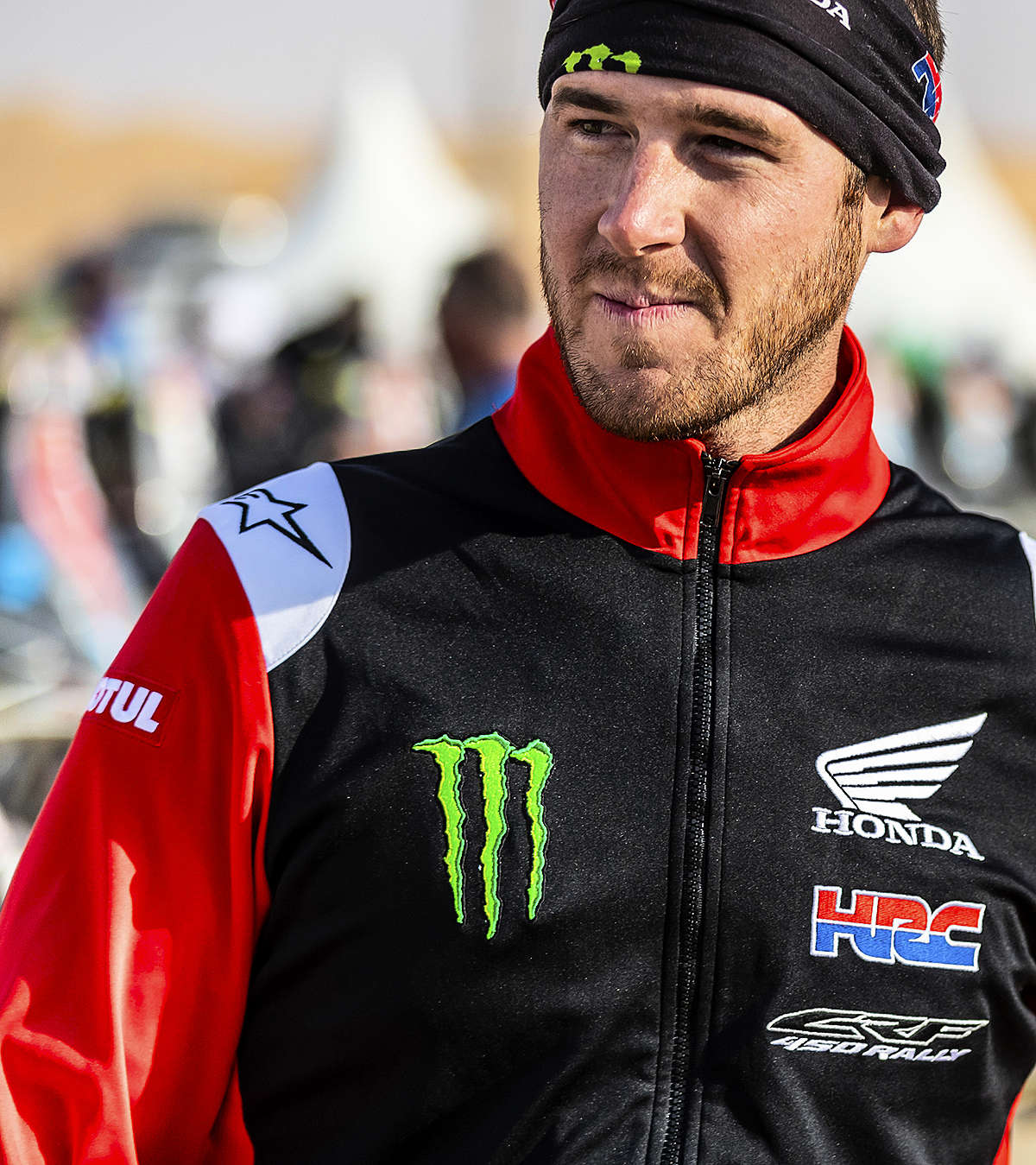 Monster Energy Honda Team’s Ricky Brabec holds on to the overall leadership of the 2020 Dakar Rally. The American is poised to tackle the final stage which could be a historical one for the Honda squad. Brabec also leads three American riders inside the top ten for the Dakar, which is an amazing result for the USA competitors.

The second leg of the marathon stage unfolded without setbacks for the Monster Energy Honda Team. Today, in the penultimate special of the rally, the pretenders to the podium got one second-to-last chance to close the gap on the 2020 Dakar Rally race leader.  Today’s stage, featuring 100 kilometers of dunes at the beginning of the special, favored those in pursuit of the frontrunners and a group soon formed including Joan Barreda, Ricky Brabec, and Kevin Benavides, all of whom made it to the final destination in Haradh without difficulties.

Chilean rider José Ignacio Cornejo finished fourth on the day, less than three minutes behind his fellow-countryman Quintanilla, who took the spoils. Cornejo now has the possibility of attacking tomorrow in the concluding stage in a bid to be among the prize-winners.

Ricky Brabec holds on to the lead that he has held since day three. The American managed well the advantage at the head of the general rankings, in spite of having dropped 12 minutes to the day’s eventual winner and now has everything in his favor in his bid for the outright Dakar Rally 2020 victory.

Joan Barreda opened the track after yesterday’s win and was followed by his Monster Energy Honda squad-mates, Brabec and Benavides. The handicap eventually led him to concede 14’48 to the stage winner. Barreda now lies in fifth place overall but is by no means out of the running for a final podium place in the race.

The final stage will be decided tomorrow between Haradh and Qiddiyah. A 374- kilometer special which will feature a 20-kilometer Qiddiya Trophy GP, obligatory for the riders who finish on the final podium of this edition of the Dakar, although the result will have no effect on the final standings of the rally.

Composure will be a trusted ally on this final stage, where the positions at the top of the classification can still change. The last hundred kilometers will give the navigators just as many headaches as in the previous week. But the finish line is not far! A 20 km special section, with no impact on the general classification, will also select the winner of the “Qiddiya Trophy”, immediately before climbing onto the final podium.

Kevin Benavides: Today I started out in the third position and attacked hard in the dunes that were very huge but beautiful. I have felt very comfortable and I reached Ricky and Joan. After refueling, we opened the track together. We have conceded some time but it was a good stage for me. Tomorrow is the final day so let’s go out there to enjoy ourselves.

Ricky Brabec: There’s one stage left. The team is working well. I’m pretty excited. I can’t get my hopes up right now. Stage 11 here in the dunes was pretty tough. Starting up front due to the cancellation of the second part. So it was really hard to judge the time. Tomorrow there is one stage left and I’m in a good starting position. I’m confident to be focused and make it to the finish line.

Joan Barreda: Today I expected less sand but there really was a lot. At the beginning of the stage I saw that it was soft with slow dunes so I figured that there would be quite big differences in the times. In spite of that, I pushed hard over the first kilometers and when I jumped a dune and took a very hard knock and I suffered quite a pain in the wrist for the rest of the special. A few kilometers before the refueling, I was running low on fuel so I slowed down quite a bit, and lost some time. After the refueling, I upped the pace so as not to waste any more time. At the end of the day, I am happy.

José Ignacio Cornejo: Today was the first day of real dunes. I was feeling pretty much at ease. It was very entertaining and I had a lot of fun. I’m in one piece and the bike too is in perfect shape. Tomorrow is the final day and we are fighting to improve our overall positions. I think that compared to last year I have improved a lot, I feel a much more complete rider. I still have to improve some things but I am very happy with my progress.

Rockstar Energy Husqvarna Factory Racing’s Pablo Quintanilla has stormed to victory on the penultimate stage of the Dakar Rally. As the ninth rider into the special, Quintanilla was able to gain close to 12 minutes on the provisional rally leader. Andrew Short enjoyed a solid day’s racing, completing the timed 379-kilometer special in eighth.

As the second half of the event’s marathon stage, the 11th leg of the Dakar Rally proved to be a challenging one for all competitors. Made up of long, fast open pistes and tall desert dunes, the stage proved to be not only fast but also extremely demanding on the riders and their machines, with many coming close to running out of fuel midway through the stage.

One rider completing the stage without issue was Pablo Quintanilla. The Chilean star immediately made the most of his later start position to attack right from the flag. Fastest to the first checkpoint, Pablo continued to push, maximizing his opportunity to claw back time on rally leader Ricky Brabec. Despite a challenge by Austrian Matthias Walkner during the closing stages of the special, Quintanilla went on to claim the win by a slender nine seconds. Going into tomorrow’s final day, Pablo lies second overall and just under 14 minutes down on Brabec.

Following his tough first week in Saudi Arabia, Andrew Short has been hugely consistent over the second week of racing. By placing well inside the top 10 on stage 11, the likable American elevated himself to 10th overall in the provisional standings. Now, with one stage left to race, Short is looking for a strong finish to his third Dakar Rally.

Friday’s stage 12 – the last of the 2020 Dakar Rally – will see riders leave Haradh and head west to Qiddiya and the event’s chequered flag. Although relatively short, totaling 447 kilometers, the timed special of 374 kilometers will still pose a big challenge to competitors as they wrap up the event in Saudi Arabia.

Pablo Quintanilla: “Honestly, the stage was really tough today – all off-piste and very fast. I felt good and was able to push as hard as I could. Overall, I’m really happy with my race and to be in this position going into the final day. After difficult months I have had coming back from injury, it feels great to be here and second overall going into tomorrow. As always I will give my all and we’ll see what will happen.”

Andrew Short: “I’ve enjoyed today, we had some really nice varied terrain. To see all the different types of sand was cool, from white sand like you’d get on the beach to the really red sand like the Liwa dunes in Peru. I was riding ok, trying to manage my fuel because I knew that would be tight. I perhaps lost a little too much time on the guys in front but overall, with one stage left to go now, the goal is simply to get to the finish safely. I’m looking forward to tomorrow and getting to the end.”

Red Bull KTM Factory Racing’s Matthias Walkner has claimed his best stage result of the 2020 Dakar Rally by finishing as runner-up on day 11. Narrowly missing out on the win by just nine seconds, the Austrian now sits fourth overall going into the final stage. Completing a strong set of results for Red Bull KTM, Luciano Benavides finished third-quickest with Toby Price three minutes behind in fifth.

Thursday at the Dakar marked the second half of the event’s marathon stage. After camping out in a temporary bivouac at Shubaytah the night before, riders entered today’s special running the same tires and having carried out the minimum of maintenance due to no outside assistance being permitted overnight.

Featuring a mixture of sandy terrains, competitors were presented with a fast but demanding 379-kilometer timed special for stage 11. With less technical navigation, the real challenge for all was managing fuel levels, with the soft sand causing many to come close to running out by mid-stage.

Matthias Walkner came close to running out before the refueling stop. Maximizing the performance of his KTM 450 RALLY while pushing hard to catch the riders ahead, the Austrian was thankfully able to carry on and challenge Pablo Quintanilla for the stage win. Briefly taking the lead at kilometer 324, Matthias ultimately lost out on the stage win by just nine seconds.

Matthias Walkner: “I had a really good stage today and made the most of my good start position to really push the tracks left by the guys in front. I was riding at 100% for the entire special. I ran out of fuel about two kilometers before the refueling but was able to lie the bike on its side to get the last bit to the pump and luckily it was just enough to carry on. I made up some good time today, but with just one stage left it’ll be tough to make up much more time. I’ll definitely give it my best and aim for a strong finish to the rally.”

Luciano Benavides also claimed his best stage result of the 2020 event today, finishing third to solidify his seventh position in the overall provisional standings. Luciano now sits just under three minutes behind the sixth-placed rider. Enjoying an excellent day in the dunes, Luciano was able to catch teammate Price from where the Red Bull KTM teammates rode together to the finish. Looking forward to tomorrow’s stage 12, Luciano hopes to close his 2020 Dakar campaign with another strong result.

Luciano Benavides: “It was a really nice day today and the first time we crossed some big dunes, so I like that a lot. I was really worried about the fuel, so I eased off before the refueling but made it ok. After that, I caught the group in front and rode with them for the rest of the stage – just trying my best not to make any mistakes and get to the finish safely. I’m really happy because there’s just one more day to go now and I hope I can finish this Dakar strong.”

Putting in a solid performance on stage 11 to claim fifth, Toby Price finished just under six minutes down on eventual winner Quintanilla. Getting his head down right from the start of the stage, Toby soon caught the riders ahead where he then found it difficult to make up any more time and was forced to ride in a group to the finish. Third overall going into the final stage, the reigning Dakar Champion hopes to conclude his time in Saudi Arabia safely and challenge for an overall podium result.

Toby Price: “I was able to make up a fair amount of time today but with the stage cut short yesterday it was difficult to get enough people between myself and the leaders. All-in-all it’s been a good day with very similar conditions to yesterday really – very fast and open. The sand has made for some tough going and like a few people today, I nearly ran out of fuel before kilometer 229. I managed to get in with about one liter left in the tank. One day to go now and I’m still feeling good so we’ll see what tomorrow brings.”