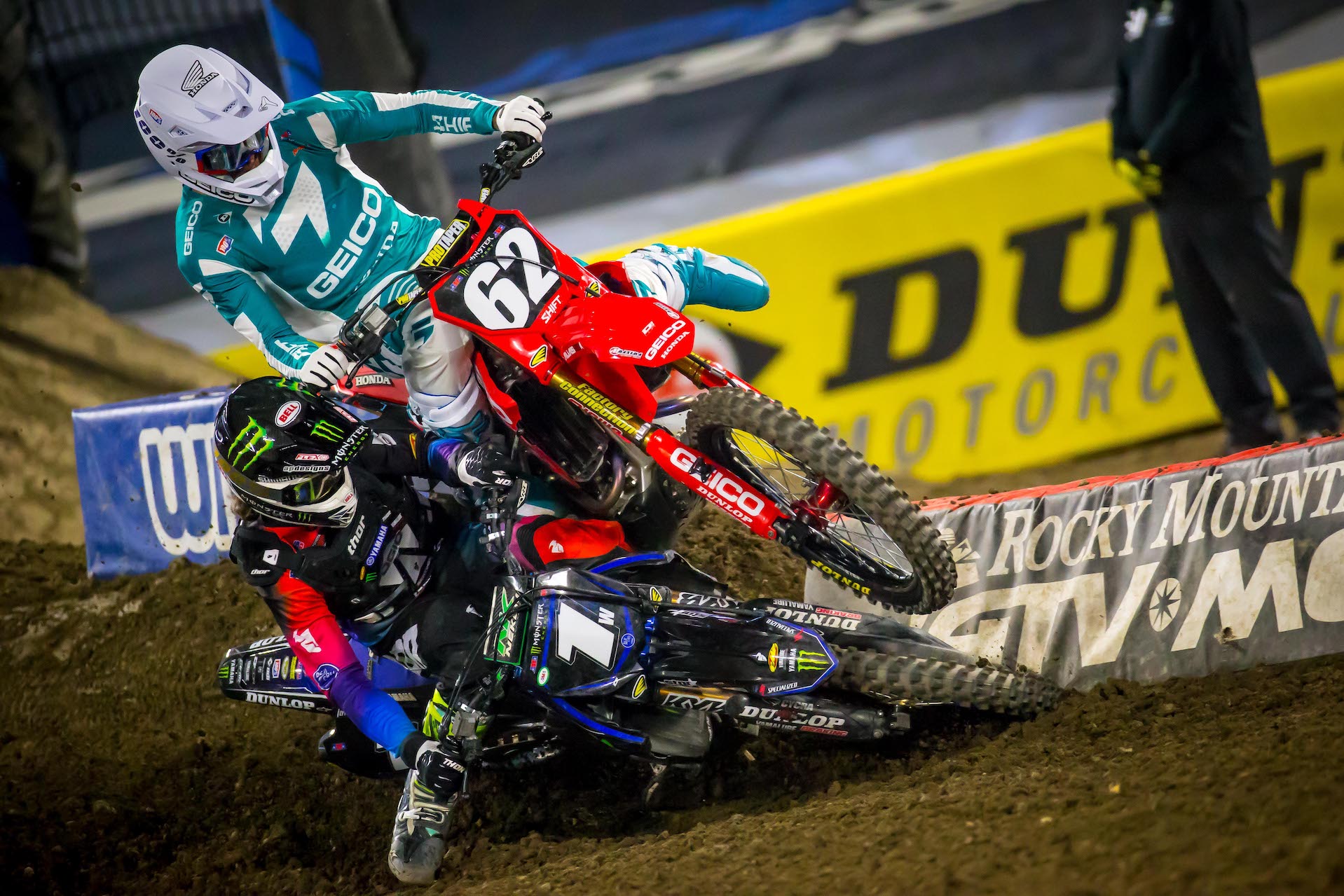 Anaheim, CA (January 19, 2020) – For the second-straight week, a promising start to the night for the GEICO Honda team ended with crashes and frustrations, this time at Angel Stadium in Anaheim. Christian Craig and Jett Lawrence jumped out to the early lead in the 250SX West main event and started pulling a gap on the field, and for a few laps their positions looked secure. Lawrence, in just his third AMA professional supercross, held the lead and looked steady. Then things came undone.

It started with Craig, who was caught by a charging 2019 250X West Champion Dylan Ferrandis. Ferrandis rushed a pass attempt on the inside and began to crash as his tires lost traction, and that sent him directly into Craig’s path. The two collided, and Craig went flying, damaging his bike beyond repair, ending his night in shocking fashion.

“I actually had the flu the entire week leading up to Anaheim 2,” said Craig. “Not sure what St. Louis did to me [last weekend’s race] but I could not keep anything down all week and lost 10 pounds so I was just pumped to feel kinda normal on Saturday. I felt off all day honestly, the track was so tight and didn’t flow well for me. I heard a lot of other guys felt the same so that made me feel better! I qualified fifth and went on to win my heat race which was cool and I’m pumped on that. In the main, I got the holeshot and led some laps before my teammate passed me. I stayed with him for awhile and knew Ferrandis was catching us. I knew he was right behind me for a couple laps and knew he was going to go for it eventually but did not expect that outcome. At the end of the day this is racing. Yeah it sucks but there’s no point it dwelling on it when I can’t change the outcome. I’m happy to be healthy and going to Glendale next weekend!”

Ferrandis picked his bike up in second, but at that point the 16-year-old Lawrence had a big lead. Then he crashed, which allowed Ferrandis to close. Lawrence fought back to hold a slim lead as the riders leaped past the white flag. Ferrandis challenged Lawrence and took the lead, Lawrence tried to fight back over a jump and into a turn, but Ferrandis edged ahead. With one whoop section before the finish, Lawrence pounded the whoops in hopes of closing back to Ferrandis and perhaps trying for a last-turn pass. Instead, he mistimed the whoops and went into a slow endo, which ended with a violent crash hard into the Anaheim dirt. The Australian banged his head and broke his collarbone in the mess. He was still credited with ninth place because of the amount of riders lapped in the race.

“No words really!” said Lawrence in a social media post to his fans. “I’ll never settle for second and will always leave everything out on the track. Lucky to only have a broken collarbone. We will get it all sorted tomorrow and get back to the races.”

Lawrence will be out of action while his collarbone heals. Craig will be on track this weekend at Glendale, Arizona.