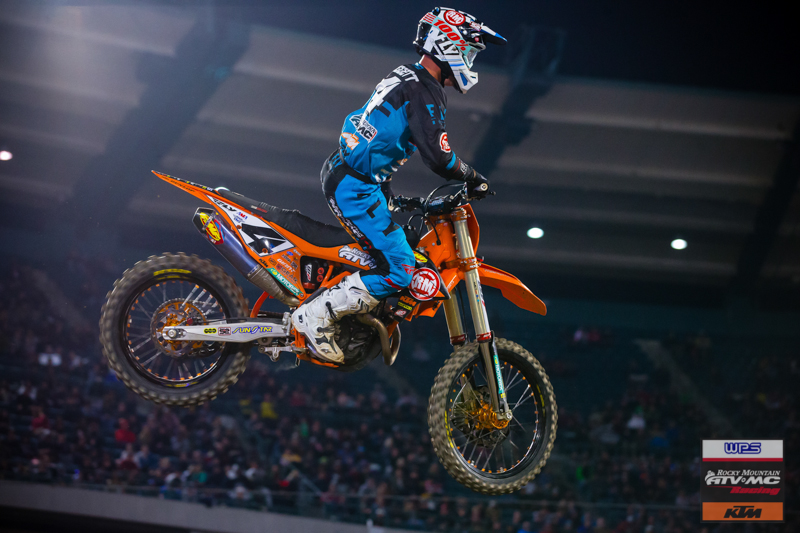 Team Rocky Mountain ATV/MC-KTM-WPS returned to Southern California’s Angel Stadium in Anaheim for round three of the 2020 Monster Energy Supercross Series. The team pits were electric this weekend with the SoCal SuperTrucks/ GEAR Off-Road /JStar Jeep Gladiator on display by the Rocky Mountain ATV/MC-KTM-WPS race rig. Team riders Blake Baggett and Justin Bogle would have a tough night, as they had their hands full on the technical Anaheim track.

Blake Baggett had some work to do in his heat race. After rounding the first turn buried at the tail end of the top ten, Blake quickly found the fast line and focused on charging through the field. By the end of the race, he had worked his way up to 6th place to transfer straight to the main event. There, Blake launched out of the gate, rounding the first turn in 2nd place. He quickly gave chase to leader Ken Roczen, using the fast line around the track to get right on the Honda’s rear wheel. Blake made his move in the tricky whoop section as he powered past Roczen for the lead. While fighting to keep the lead, Blake went down after he caught a square edge entering the split rhythm lane. After remounting in 14th place, Blake pulled a tear-off from his 100% goggles and got to work. He made his way inside the top 10 before getting caught in a tangle with Aaron Plessinger and Benny Bloss that sent him to the ground again. After re-entering the race at the tail end of the field, Blake raced back to a 14th place finish at the checkered flag.

“It was a tough one tonight. I had a great start in the main and I was feeling it tonight. My speed was there and had the track dialed. It was unfortunate I went down while battling for the lead, as I feel we had a chance at the win. We leave here healthy and look forward to next week at Glendale and the triple crown.”

Justin Bogle timed the gate drop perfectly in his heat race and led the field down the start straight, rounding the first turn in 3rd place. Justin had the speed, but still came under attack from Jason Anderson. The two went back and forth before Justin slid back a spot. He kept his speed, though, transferring to the main with an 8th place. In the main, Justin wasn’t able to get the start he needed. He was buried at the tail end of the pack early in the race. With a lot of work to do, Justin kept his head down and charged through the field to finish in 16th place at the checkered flag.

“Tonight was a struggle. I didn’t have the flow all night and it’s frustrating because I know I should be running at the front. We will make some changes, keep making progress and come out swinging at Glendale next weekend.”

The team will now head to State Farm Stadium in Glendale, AZ for round four of the 2020 Monster Energy Supercross Series – the first triple crown race of the season.