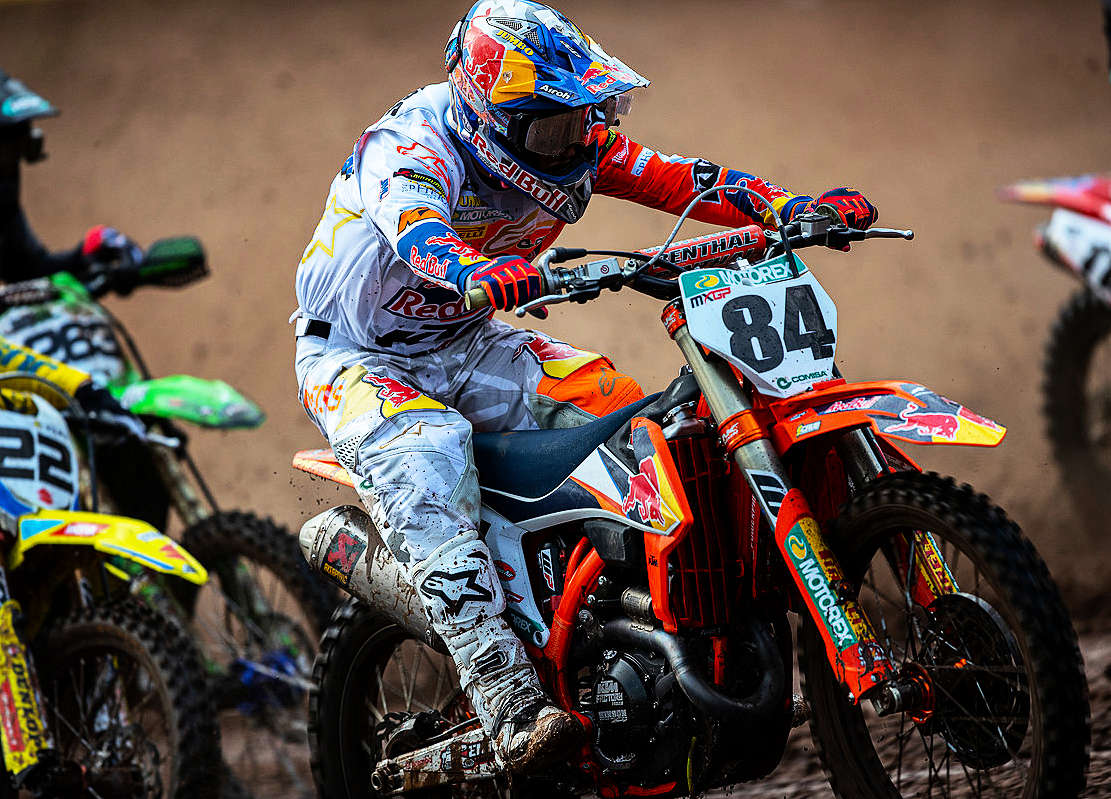 Red Bull KTM riders were active with pre-season international motocross appearances today as Jeffrey Herlings and Tom Vialle endured wet and torrid conditions in England to win the MX1 and MX2 classes of the Hawkstone International (with Rene Hofer making the MX2 podium in 3rd place) while Tony Cairoli grabbed results of 2nd and 3rd in two races in the sand of Mantova for the third and final round of the Internazionali D’Italia.

A stormy climate battered the historic Hawkstone Park circuit in central England and caused the second moto to be shortened to twenty minutes and the third ‘Superfinal’ to be canceled. In the swampy sand, Jeffrey Herlings took his works KTM 450 SX-F to a 3-1 scorecard. The Dutchman crashed at the start of the opening race – won by SS24 KTM MXGP’s Shaun Simpson – but recovered all the way through the field to claim 3rd spot. He holeshotted and won the shorter second sprint to walk the top step of the podium in his first outing of 2020.

In the MX2 class Tom Vialle registered results of 4-1 to celebrate as the overall winner on his KTM 250 SX-F. The Frenchman stood beside teammate Rene Hofer who rode to positions of 2-6 to earn the third step of the box. Liam Everts was victorious in the EMX contest.

Meanwhile, in Italy, nine times world champion Tony Cairoli competed for the first time since the Grand Prix of Latvia last July. #222 diced with world champion Tim Gajser in the MX1 moto in the Mantova sand and took a respectable 2nd place. Cairoli finished 3rd in the Supercampione race.

Red Bull KTM Factory Racing now turn their attention and focus firmly towards the British Grand Prix and the first round of twenty in the 2020 FIM Motocross World Championship at Matterley Basin in the UK on March 1st. Tom Vialle and Rene Hofer will be present at the LaCapelle Marival International in France next weekend.

Jeffrey Herlings: “I felt good today. It was a shame to have that start crash in the first moto but I still came back from last to third and almost got Glenn [Coldenhoff]. Then I holeshot and led the whole way in the second. It was about survival and there was only really one line to use, so passing the lappers was tricky. Anyway, we got it done. It was useful practice because Matterley could be the same!”

Tony Cairoli: “The first race of the season and we didn’t expect much but both races on the podium was OK. We know where we need to work, and we are still quite far away from our form but it was good to get a race done before the first Grand Prix. Now we have clear ideas.”

Tom Vialle: “It was a really hard day with the weather and the rain did the track no favours. The first race was difficult because I was fourth and had a lot of water in my goggles. I had to stop and change and restarted tenth but came back to sixth: I was really happy with the bike and I was feeling good so the result was OK. I had the holeshot in the second race, which was only twenty minutes, but could make a lead. I’m really happy. We’ve done two sand races, and now we go to hard-pack with LaCapelle next weekend. It will be a good race to do before Matterley and to get some familiar sensations on the bike.”

Rene Hofer: “Quite good today. I’m quite happy with my mud riding. I almost had the holeshot in the first race but still managed to take the lead in the second corner which was important to save my goggles. I led all the way with two laps to go and felt happy with second in those conditions. I didn’t start so well in the second moto – top six I think – and had a small crash so just rode as well as I could to the finish. Race by race I am getting more comfortable and confident.”