Over the years, Jason Anderson has made countless aggressive passes on Justin Brayton that have put him either off the track or on the ground and the veteran showed he has had enough of that in San Diego. Early into the main event of the 2020 San Diego SX, Anderson and Brayton were battling for a spot inside the top-ten when Anderson hit Brayton one too many times I think. After the hit that put Brayton off the track, Brayton got back on the track and headed straight for El Hombre’s front wheel.

Watch the video below to see how it turned out. This one did not end well for Anderson, but I guarantee this is not the last we will see of this battle. After the incident, Brayton was called into the AMA truck, but with no prior history of these types of moves, we were told that he was only given the AMA version of a slap on the wrist: a warning.

Big props to Jason Anderson for his comment about the incident. Not sure I believe him when he says “no hard feelings,” but he definitely knew he had it coming. “I started it JB finished it,” Jason said on Instagram. “No hard feelings and looking forward to good racing.” 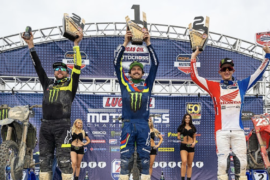 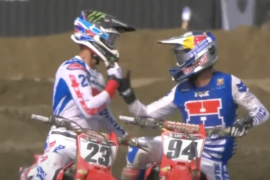