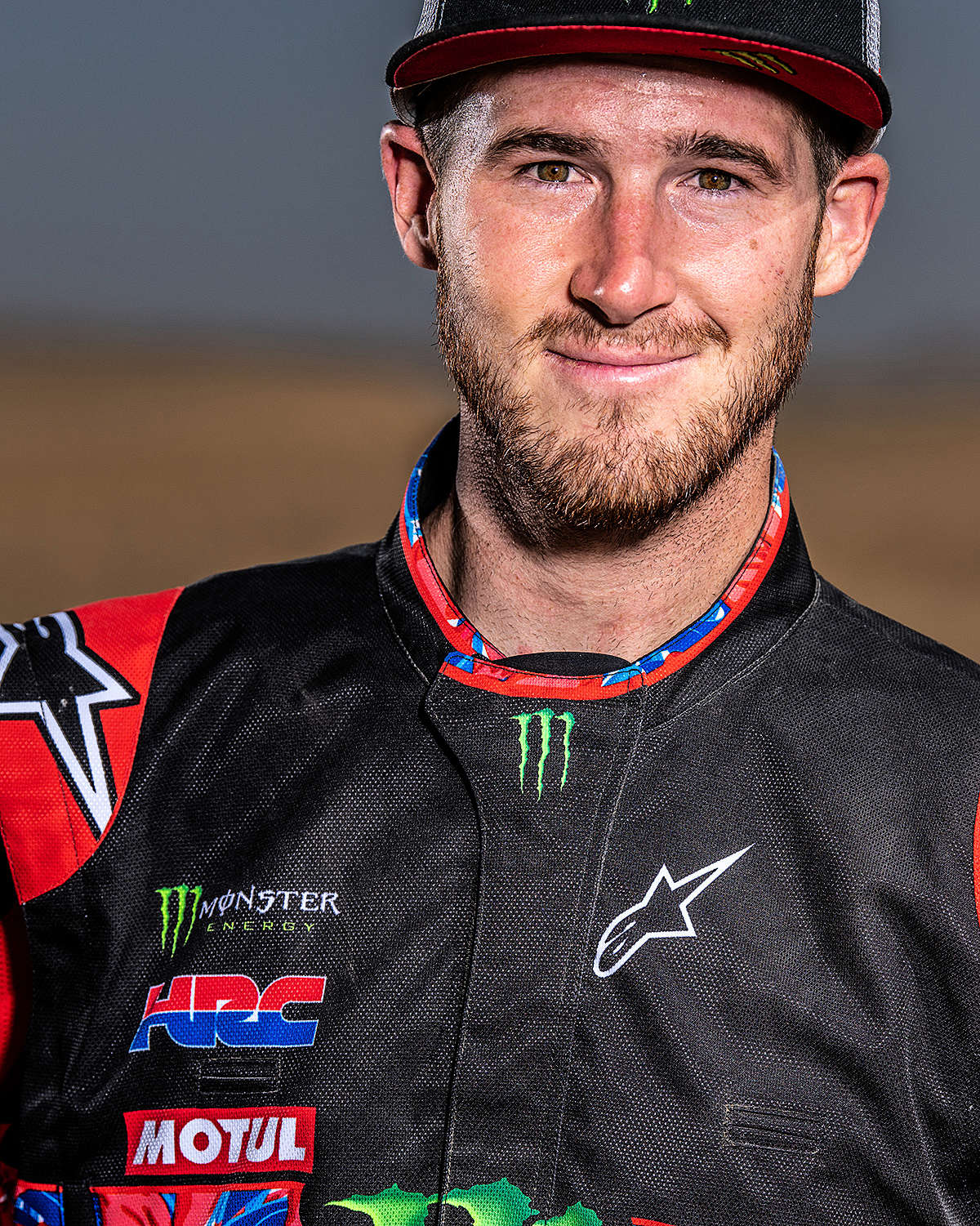 Certainly, a profound statement, isn’t it? Well, like a character out of a modern-day Jack London novel, Ricky Brabec went out and won the fiercest, most treacherous and most prolific rally on Planet Earth a fortnight ago when he and his Honda CRF450 Rally captured the motorcycle classification victory at the Dakar Rally. The premiere Dakar triumph for an American in the event’s 42-year history, Southern Californian Brabec sent the bike racing world spinning on its very axis with the result. Remarkably friendly and easy to speak with, Brabec stopped in his knobby tracks at sponsor Monster Energy’s corporate headquarters in Corona, California to reflect back on his 7,000 km Odyssey and where it has, even weeks later, taken him. Check it out as Eric Johnson talks to the Dakar winner.

Ricky you’re back home here in Southern California as the Dakar Rally 2020 motorcycle class champion. Looking back on what you achieved over in Saudi Arabia, do you feel like you conquered the world?

It definitely doesn’t feel like that. It’s a pretty prestigious race and it’s pretty cool to be the first American to win and we all worked really great together. I don’t know. There is a lot more to do in life. Obviously, we want to keep trying to win this thing and see how long we can go. Now that we’re now home in California, we’re just trying to enjoy time off before we start training hard again. You don’t want to train hard every day all the way to the next Dakar, otherwise, you’ll get to that next Dakar and be all burned out. I’ve been home for almost a month now and it has been busy every day doing media and publicity stuff. The media has been out of control. Phone calls, e-mails, in-person interviews, in the next week I have to go to India for some Honda event and then after that I’m going to come home and go to the Sonora Rally and after that, I’m going to go to Japan for an African Twins event. I’m pretty booked-up, literally, until June. It’s been a lot of publicity stuff, but I mean it’s cool. I’m really busy. Being in my shoes, I’m waking up every day and trying to do something. It’s cool, but it’s a lot, though.

But it’s a good problem to have, huh?

Yeah, it’s a good problem to have, for sure. It’s really hard for me to take it all in because where I come from, I was just a desert racer. I’m used to going to the race, unloading the truck, racing and loading up and leaving. Now there are weeks and weeks of media, you know? Everyone wants to know everything and every magazine wants to know everything, so it’s pretty cool. But it’s definitely a lot.

Honda had not won the Dakar Rally since 1989. That’s 31 years. I’m assuming they were absolutely thrilled with your result. And not only that, but they took down KTM. No mean feat, eh?

Yeah, Honda is really excited. I just a meeting two weeks ago with the head rally guy at Honda and they’re really, really stoked. I’m stoked as well. We finally put the pieces together and made it happen. Now I think we know the recipe to success. Hopefully, in the next year or even two years, we can put the Honda on top.

Last year you were leading the Dakar Rally with only one stage remaining when the engine in your Honda went let go. To come that close and to come up short had to make your ’20 result all that much sweeter. Thoughts?

Yeah, last year, 2019, we were really close. It was definitely hard to have that happen and it was harder to get back in the saddle and to have the confidence to go because this year in Saudi, every single day I was always wondering about the machine and what issues we might have. We were very fortunate. We didn’t have any issues. We’d make a few mistakes a day, but we’d eliminate them. It really paid off. We’re going to stick to the same program in the future and we now know the recipe. We’re going to start right back up.

Both during and after the event there was talk that the Saudi Arabian desert and its weather and terrain played into your hands as it was not all that different from where you grew up in the desert regions of Southern California. Was it that similar?

Yeah, the altitude was a little bit lower than where I live, but the desert was the EXACT same. The Mojave Desert and the Saudi Arabian Desert was the same thing. Saudi just had less bushes. Saudi was more open. Where the Mojave Desert is just bushes everywhere and it’s really hard to go fast in a straight line, Saudi was open. The dirt was the same, the sand washes were the same, the weather was, literally, exactly how it is at my house in California. I felt really comfortable there.

For all of us common people out there, just what is it like to ride and compete on a motorcycle that long and that far and that hard for 7,000 kms? What are you thinking? What are you doing?

A typical day at this rally would be waking up at 3:15 in the morning and you try and eat as much as you can. By 4:15 you are gearing up and on the bike. Some days we’d be on the bike until 1 PM and then other days you’d be on the bike until 4 PM, so you literally stuff your jacket with as much food as you can. You have to try and eat when you’re out there riding. You have all kinds of stuff with you just to try and keep yourself energized.

Do you see your competition much out there in the middle of all that nothingness?

Okay, my man. What was the best part of the entire trek? I know you’re thrilled to have won, but does anything else jump out at you?

I wouldn’t say winning was the best part because everyone is going to say winning is the best or you had fun because you won, the best part for me was the first week. The first five days I had the most fun because it was desert-like my house in California. I felt comfortable and I felt confident. It all felt natural to me. The whole rally and the whole experience are what really drives us and brings out there. The first week was really cool, but we also lost a rally racer in Paulo Goncalves.

You knew Paulo, didn’t you?

Yeah, he was a former Honda guy. It was a memorable moment, but it is not something that we want to remember Dakar as. It was very unfortunate. But we pushed on and did what he would have wanted us to do and that was to keep racing.