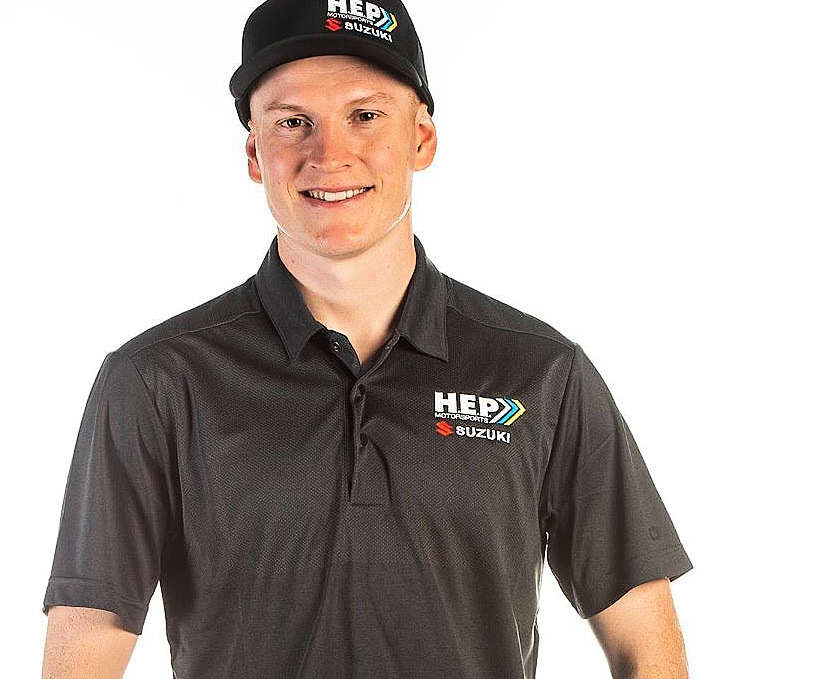 HEP Motorsports / Suzuki US rider Max Anstie will be at Matterley Basin this weekend, the sight of his stunning 1-1 result at the 2017 Monster Energy Motocross of Nations. Unlike three years ago, he will be watching from the sidelines.

Injured in the preseason, the British hero will miss the complete AMA Supercross Championship but has more than enough time to start the opening round of the AMA Nationals at Hangtown in early May. We caught up with Anstie and asked about his health, and what he expects from the 2020 season, both in Europe and in the USA.

Max, welcome back to Europe.

How are you doing as far as getting back to full fitness?

Good, as far as the doctors are concerned I am ahead of schedule and feeling good. The doctors said it looks positive and when I am in the states, I go there every week. It should be about three or four weeks before I can ride again. That doesn’t mean I am ready to race again. I’m going to have to build it up slowly. I am walking now and getting it stronger, but I have never had an injury like this that takes so much time. I am slowly getting there.

How are you feeling mentally? It is a blow for the Supercross season but of course, it gives you more time for outdoors, which is where you were going to shine anyway?

That is my mindset. Even going into Supercross I knew it wasn’t going to be an easy task and I knew I wasn’t going to underestimate it. And sure, this sucks I can’t race, but it is weird. I am missing the whole of Supercross season, but I will be ready for Hangtown so I am still getting ready for a championship. It isn’t like I am doing GP’s and will miss the first five rounds. My mindset is, I will do a full championship and can prepare for that. It isn’t the mindset that, “Oh, I am going to miss all the rounds and I can come back and do some good races.” It has been good because I went to the first five or six Supercross races and learned a lot. I wanted to be as familiar as possible because if I am on the start line for Supercross in 2021, I will have a little experience of what to expect. I have done everything but ride the bike. I know all the stupid little things. I need to make it as comfortable as possible. I can now get ready for outdoors, which I would have liked to have done first anyway.

I am guessing doing a GP or two to prepare for Hangtown might be a great thing for the fans, but not really great preparation as the bikes are different anyway?

I mean, Suzuki doesn’t have anything set up over here. It would be cool to do a GP or two, but if I can do a GP, the team would want me racing a Supercross. Even if I was healthy, I want to take the time to get ready for Hangtown and make sure my body is as good as it could be. I don’t want to race early when I don’t have to. Sure, doing a couple of GPs would be cool.

Tell me, this weekend is the opening round of the MXGP and MX2 World Championships and going by the forecasts, it will be a wet one. Do you know anything about racing Matterley Basin in the rain? [Anstie went 1-1 at the 2017 MXoN at Matterley in muddy conditions]

A little bit (laughs). I tell you what, I am a little further north than Matterley, and there is snow everywhere today. We say it every year, but the way the track is it takes water well and it isn’t ridden on at all. I think the biggest problem might be getting the trucks in and out if the rain and wind are around. Apart from that, the racing will be okay as long as it isn’t belting down. It will be raceable and we have ridden in freezing conditions at Valkenswaard, so it will be okay.

We have a great field in both MXGP and MX2 this year—one of the best ever with a lot of fast guys. How nice is it going to the opening round of the MXGP Championship as a fan and not a racer?

It is cool because I am not meant to be racing this championship. It will be interesting to watch and see what happens. Some people have prepared differently and watching the preseason races, those Hondas of Mitch Evans and Tim Gajser look good but those races are different. People don’t show their cards early on. [Jeffrey] Herlings and [Antonio] Cairoli are not going in 100%, but maybe 80%.

With the series 20 rounds long, those first three or four rounds are also a little like a preseason race because everyone isn’t 100%, right?

That is fine, but still, as a racer, you want to give it 100%. Even me thinking about Hangtown, I know I won’t be 100% ready to rock it in the first round. These guys are thinking the same thing going into Matterley. It is hard as a racer because every point matters. It isn’t like Hawkstone Park where if you go DNF-DNF, it doesn’t matter. It comes with experience. I think somebody like Cairoli, or even [Clement] Desalle, you will see those guys more relaxed and calmer, because they know within a few rounds they will be okay. Also remember, if you get beat, you still get beat and your mind has to stay strong. You don’t want your ass whooped at the first three rounds and then come back from that.

Obviously the Brits Adam Sterry and Shaun Simpson should be happy with a top ten at Matterley, but somebody like Ben Watson, he is a serious contender for the MX2 Championship. Everyone is looking to try and win the Grand Prix in the MX2 class. What is your opinion on Ben and how much are you looking forward to that?

For sure, and in fact, Ben is living in my house in Belgium.

Oh, then he should do well at Matterley then with some of that Matterley dust in the house?

Exactly. I have been there for the last three or four years. I expect him to do well and he has more experience in that class. It is the first round and they have to progress, but that MX2 class is very open. Also, Conrad [Mewse], we know how fast he is. They just need to put it together every weekend. That 250 class is one to watch.

How about top three in each class for Matterley?

Yep, alright, the top three each class at Matterley? I think Jeffrey and Gajser, you can’t bet against them. I know that they will put the work in. Gajser looks solid. I think Jeffrey then Gajser and it could go the other way around. I am not sure if Tony is prepared, I just think they are taking a different approach. Maybe taking it slower early to be stronger later. So, maybe third. It could be Desalle, or maybe Evans. Mitch Evans will be good, but not sure how he will be at the first GP. Ok, I go Herlings, Gajser, and Desalle.

How about MX2, you can’t go against Ben? He is living in your old house.

I know, just thinking where to put him. I am thinking it would be nice just for a third. I think the first race top three. Of course it would be amazing if he won, but I would be happy if he gets third, That is like winning. Then you have [Tom] Vialle, and [Thomas] Olsen, but Olsen has been out a little while. Olsen will be strong but it depends on how his hand is. One of those Kawasaki guys?

Yes, he has been good. How about Moosdijk? No, I go Vialle, Watson and Moosdijk third.

I have Herlings, Gajser and Evans, and Olsen, Vialle and Watson.

The only reason I don’t say Olsen is because I am not sure how fit he is.

What do you have leading into Hangtown in May?

I am back in England for a week organizing bits and pieces for my wife’s [immigration] visa. I have to go to London for that. Then I might go to Daytona [SX] with the team and some more rehab and then back on the bike in three or four weeks. I need a month to build the speed and then I start training hard and do some testing. We still have to get a house over there. We have been there for three months but organizing things like house and car is really slow and difficult. Although I am injured, it gives us time to organize that stuff, because racing and organizing all that would be stressful and even more difficult.