After qualifying was over and before the night show of the 2020 Daytona SX began, someone had the bright idea to completely change a whoop section before the 250 heat races. During qualifying, the whoops were rounded on top and fast, but without warning or a parade lap to see the changes made, the 250 heat races sent it wide open into a completely different set of whoops that had grown substantially and were now peaked out. It looked like someone had lobbed a grenade into the pack on the opening lap through the whoops, as numerous riders went flying over the bars. Daytona is not a FELD event—the promoters of 16 of the 17 Supercross’—so we are not clear on who makes these calls at Daytona, but that person or persons should know better.

After the destruction witnessed in the 250 heat races, the track workers rolled the whoops with the dozer and made them closer to what the riders saw in qualifying, but it was too late for Nick Gaines—who had been having a breakout season but is now out injured with a broken hand. Nick sent it into the whoops wide open and ended up going over the bars and getting clobbered by Chase Sexton after he hit the ground.

You can watch a video of Nick’s crash and read his injury update below the video.

Nick posted an update to social media and was much nicer and accountable than I think I would have been. “Super bummed on how Daytona went down,” Nick said from Instagram. “I was feeling great on the bike all day. Had a great start in the heat race and I landed off the triple before the whoops wide open heading towards the whoops—all day they were easy and rolled off and you could hit them wide open. I got to the whoops and last second I noticed how big and peaked they were but it was too late. Knowing what I know now I should have come into the whoops with a little bit of caution. I didn’t think they would be so much different than they were all day in practice but it is still my fault. I take all the blame. Unfortunately, I have a broken hand.” 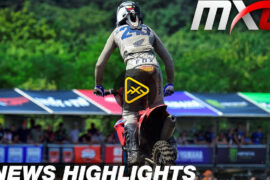 Highlights: 2021 MXGP of the Netherlands 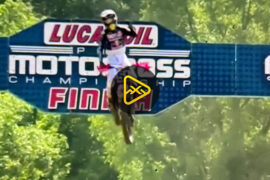 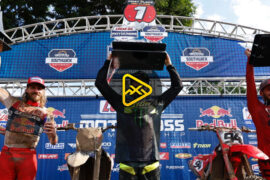