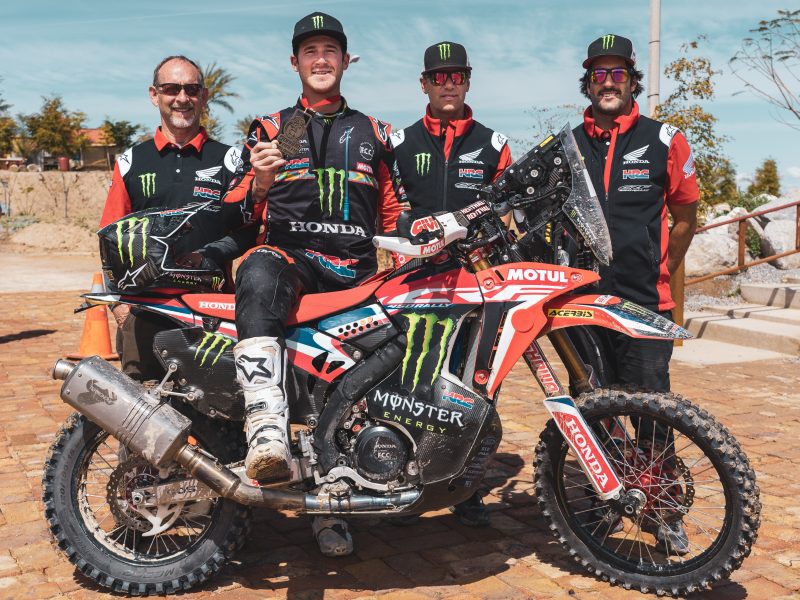 Monster Energy Honda Team rider Ricky Brabec made off with the victory in the Sonora Rally, held in the Mexican Sonora Desert on the border of the United States. For Brabec, this is a third win in the event, the second in a row.

Current Dakar Rally title holder, American Ricky Brabec, retains the top honors with a triumph in the Sonora Rally after having commanded the prestigious American race this week. The rally featured 1358 km of racing, including some 1078 km of the timed special stage, on some very Dakaresque terrain: high-speed hard ground, sand, dunes, and stony terrain. The Monster Energy Honda Team rider claimed four out of the five stages and even managed to pull back from a 13-minute penalty which had been meted out after the first stage. The American went on to win the rally with a margin of less than a minute over the nearest rival. This represents Brabec’s third triumph in the Sonora Rally, the two most recent having been won consecutively.

Ricky Brabec
“I always look forward to the Sonora Rally in México. It’s the only rally in North America that simulates a Dakar style rally raid. It has all the ingredients; fast pistes, mountains, washes and mountains dunes! This year the organization laid out a route that took us to new places and new faces. I had a set back in stage 1 that left me with large penalty and I had to claw my way back to the top, day by day. It made the final stage interesting when I needed to make up over a minute and only have 142km to do it. Thanks to my Team and my Factory CRF450 RALLY, I was able to overcome and finish on top for the third time in the Sonora Rally. It was an incredible event, well organized and looking forward to coming back in 2021. I wanted to also give my condolences to all the victims of the current Covid-19 virus. Everyone please be safe and stay healthy so we can get back to normal soon.”