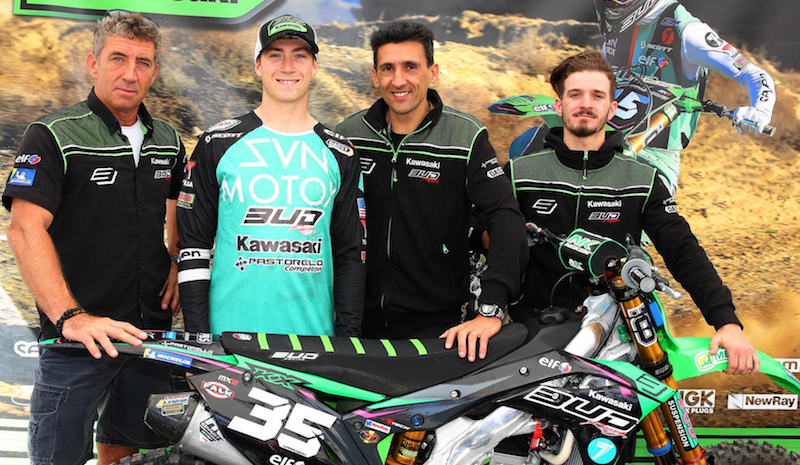 American Mitchell Harrison of the Bud Racing Kawasaki outfit is back in California at the moment and working on some things to come back for the next Grand Prix, whenever that might be. Having started the season with 22 points and is 15th in the MX2 championship points Harrison looking forward to sorting out some issues and coming back stronger than ever.

With the AMA supercross championship set to re-start in September, and all the leading American riders racing that series, there is a possibility that Harrison might get the call from the AMA to race for Team USA at the 2020 Monster Energy Motocross of Nations, set for Ernee, France on September 27.

Despite an up and down MX2 challenge, there is no doubt Harrison has the talent, as his podium finish at the USGP in 2016 and a podium finish at a round of the AMA motocross championship proves.

We gave the Californian a call last night and asked him would he want to race for his country and also how he is doing with the coronavirus situation.

So, tell me, where are you at the moment?

I am in America. We flew back three weeks ago. Once the French President said they are going to grade three lockdowns.

Which part of America and how is it going with this virus cases and stuff?

I am in Murrieta, Southern California. It is pretty low; I think in Murrieta we have 11 cases I would say (Murrieta has 103,466 population). It isn’t that much. I think they are freaking out more than they should be.

Where I live there aren’t any cases, but I live in a very small village. I know in other parts of Holland there are many more cases. You can ride your bike or go for a walk, as long as you are not with a big group of people, I think it is two at the most now, or family members can go out together walking, for exercise. Is it similar there?

We can go out with a lot of people. There are trails behind my house and a lot of people go up there and we were playing golf until a couple of days ago and they have just closed that. We are going to Arizona this weekend, just so we can play golf.

Obviously, the World has stopped in many places, including most sports and that applies to you guys. How has that been not being able to race?

I mean, it sucks, because I had back to back weekends with the French championships and Grand Prix’s and now, we go into preseason mode again. For me, it was good, because my first two rounds were not what I wanted, and I can now work on some things.

This whole thing has kind of killed all that offseason work, right?

Basically yes. It is now just a long season and you need to work like this is the offseason and you have to be careful and smart about how you do this period.

Have you taken some time away from it, because it is a long time before the next Grand Prix?

Well, I have been off the bike for three weeks, and all my stuff is in Europe and they need to ship it here. As for training, I am continuing what I was doing and longer bicycle riders.

Now the big question is, with AMA supercross now seemingly going ahead in September and October, it means that Team USA won’t be sending the likes of Tomac, Barcia, Cianciarulo or any of the top guys because they are all signed to race AMA supercross. So, would you want to race for Team USA if they needed you?

Well, that is what I have been told by people involved in the whole thing, and Davey Coombs mentioned it to me this week. I can imagine you haven’t even thought about it, but would you ride for Team USA?

Obviously, that would be awesome, but as of right now, I wouldn’t pick me.

I know right, normally you go for the A-Team, which is Tomac and maybe someone like Cianciarulo, and the top 250 American, but those guys won’t be available. Niether will guys like Barcia, Baggett, Webb, or the top 250 riders from US, so pretty much, if you race the AMA supercross, you will be busy the weekend of the MXoN. So,you are one of the few American’s who would be able to race it.

I would love to, and I think I could get back to where I am meant to be and I would say yes and that is a dream I have had and I would like to race for Team USA.


Have you ever ridden Ernee?

No, in fact, I thought St-Jean d’Angly was Ernee, and when I got there I was confused. I was like, why is this so different.

Like, where is that big crowd on the hillside?

Well, even at St-Jean you have a hill with a crowd and then I was thinking this track is totally different and there must be two of them.

As you would know racing in France, the French tracks can be rather similar.

Yes, all hardpack, hilly. The French championship has some really cool tracks.

As we said, it is going to be a long time before you race again, they have Russia and Latvia the first two weeks or June and that might have to be pushed back. Do you have an opinion on when it might get going again?

Wow, I mean, I would hope June. I have a feeling it is going to die down, but I am a bit of a conspiracy theorist and I feel like they are covering something up, but I hope we can race in June. As it is looking right now, it doesn’t look like anything is getting better. I am not sure how we can do those November races with contacts up in October.

I think teams will just have to extend the current contracts for a month or two. It can’t be that hard?

It is a bit of a cluster, maybe you just ride the bike a week before the races while you are testing the new teams’ bike? I mean I am pretty far back, but if I can pull myself back, I can still be in it.

As you mentioned the first two rounds didn’t really go as you might have hoped, but how did you feel in those races?

Well, I think Britain was a new track. I was speaking to Nathan Crawford and we were saying that is was difficult, because it was a long track for one, and we only had one practice, so we had no clue and it takes a while to sort a track out. That was hard and I finally got it dialed for the second race. Valkenswaard I was 10th in qualification, then 10th in the first race, but I had a goggle issue and then a mix up when I went to change them, we were not ready, and when I got them I flipped them upside down, that took longer, so I lost time there, but I ended 10th and then the second race I crashed at the start and I couldn’t start my bike until the leaders were around the finish line and I came back to 17th, so that was a good ride. It should have been two top ten finishes, but that is racing. After that I talked to my Dad and he knows me forever obviously and we talked about what I did wrong and we worked on my form and we figure out what I was doing wrong in the corners and we had a French championship race and I was looking forward to that, but it was canceled.