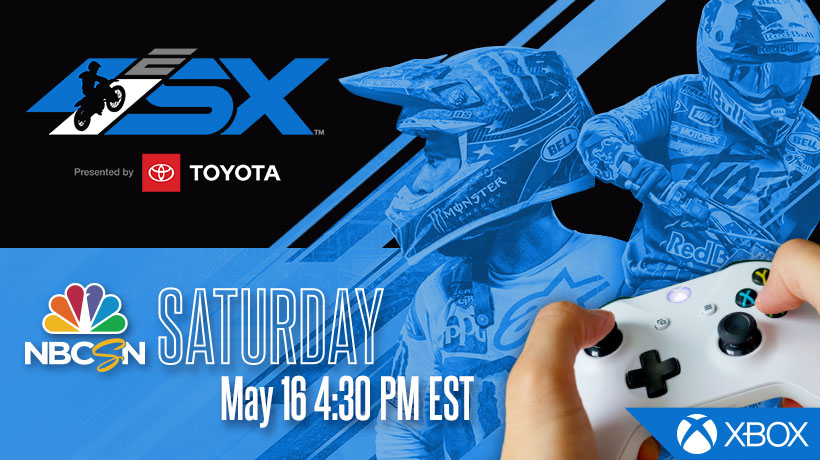 Ellenton, Fla., (May 12, 2020) As the Monster Energy AMA Supercross, an FIM World Championship, continues to develop plans to resume racing later in the year, the stars of the sport took to a virtual track for the inaugural Monster Energy Supercross E SX event, presented by Toyota, which will be broadcast on NBCSN this Saturday, May 16 at 4:30 p.m. ET.

Although not racing in the Supercross E SX event, current Monster Energy Supercross points-leaders Eli Tomac and Ken Roczen, separated by just three points after racing ten rounds of the halted 17-race championship, both make appearances to offer encouragement or in some cases trash talk with their fellow competitors. Always colorful Blake Baggett also joins in on the conversation and provides a comical antidote as to how mechanical issues can also arise in the virtual world of racing.

A staple at every Supercross event, the national anthem will be virtually performed by 2019 ACM Duo of the Year nominees LOCASH. The Country music duo is made up of singer-songwriters Chris Lucas and Preston Brust who first broke out with the song “I Love This Life”, then followed with their first #1 hit “I Know Somebody”. Their latest single “One Big Country Song” and album “Brothers” is available wherever music is sold or streamed.

New features of the Monster Energy Supercross – The Official Videogame 3 made it possible for multiple racers to compete against one another (multiplayer mode) while a race director (race director mode) can host the race, assign starting positions and manage multiple camera angles to ensure that the best track battles are being captured.

Known throughout the gaming world, windham151, as he is known via his YouTube channel, was recruited to manage all of the on-screen action as the Monster Energy Supercross E SX event race director.

After the initial broadcast on NBCSN, the Monster Energy Supercross E SX event, presented by Toyota will be available for viewing across Supercross’ digital platforms – Facebook, YouTube, Twitch and SupercrossLIVE.com.