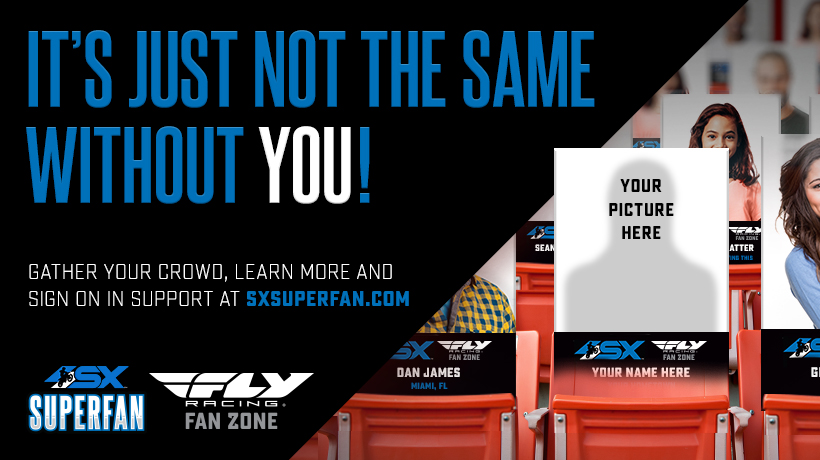 It’s not the same without fans. Monster Energy Supercross fans now have the opportunity to show their support for the riders, teams and sport during the remaining seven races by becoming a SX Superfan and purchasing a custom created poster. Posters will be positioned in seats at Rice-Eccles Stadium and those who purchase will also have the chance to be featured during the made-for-tv races broadcast across NBC networks and access to exclusive video conference calls from behind the scenes in Salt Lake City. Details on how to become an SX SuperFan can be found here.

Supercross returns to racing after an abrupt halt in early March after completing ten rounds of the 17-round championship. NBC Sports will present the final seven, made-for-TV races across NBC, NBCSN & NBCSports.com. Races will also be available to domestic Livestream subscribers via the NBC Sports Gold “Supercross Pass” and internationally via the Supercross Video Pass.

About Monster Energy Supercross:
Monster Energy AMA Supercross, an FIM World Championship, is the most competitive and highest-profile off-road motorcycle racing championship on the planet visiting 13 different states in 2020. Founded in America and sanctioned by the American Motorcyclist Association (AMA) in 1974, Supercross is currently co-sanctioned by the Federation Internationale de Motocyclisme (FIM), the official global governing body for motorcycle racing, thus making it a formal World Championship. Over 17 weeks and a million-dollar All-Star Race, Supercross attracts some of the largest and most impressive crowds inside the most recognizable and prestigious stadiums in North America to race in front of nearly one million live fans and broadcast to millions more worldwide. For more information, visit SupercrossLIVE.com.