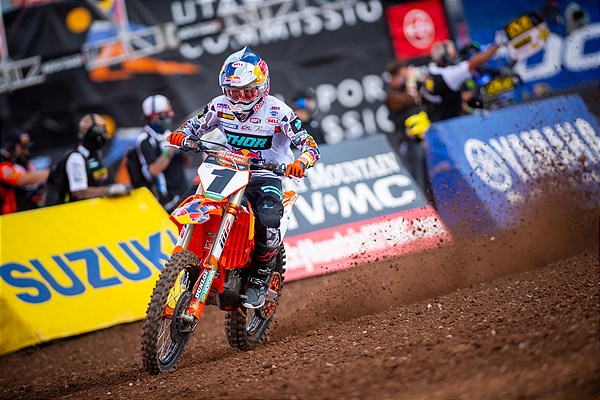 SALT LAKE CITY, Utah – Red Bull KTM Factory Racing Team’s Cooper Webb continues his podium streak in Utah with a runner-up finish at Sunday’s 15th round of the 2020 AMA Supercross Championship, the fifth of seven rounds taking place inside Rice-Eccles Stadium this month.
Coming off a statement win at the previous round on Wednesday, Webb came into the day with victory on his mind. He got off to a top-five start in 450SX Heat 2 and he passed his way into fourth by lap three. He raced back-and-forth with Jason Anderson through the final few laps where he ultimately secured fifth in the heat race.
In the Main Event, Webb powered his KTM 450 SX-F FACTORY EDITION into the holeshot as he secured the early lead. He led a hard-charging Ken Roczen for the first five laps before getting passed, and he maintained a close second-place position for the remainder of the race. After 29 laps of hard racing, Webb claimed the runner-up position, where he now sits one-point back in third in the 450SX Championship Standings.
Cooper Webb: “The holeshot was huge tonight. Kenny was riding well and I knew he was a little faster, so when he got by me I was just going to try to pace him. I made a charge at the end but we were so close in times it’s hard to make those chunks up. The track was definitely tough – it had a lot of flat turns, which was a little different than what we’re used to. We’ll come back in a few days and try to get the top step.”
Next Race: Round 16 in Salt Lake City, Utah – Wednesday, June 17
Results 450SX Class – Salt Lake City (Round 15)