In the final regular-format race in the Eastern Regional 250SX Class, GEICO Honda’s Chase Sexton extended his points lead to 6 with his fourth win of the season. 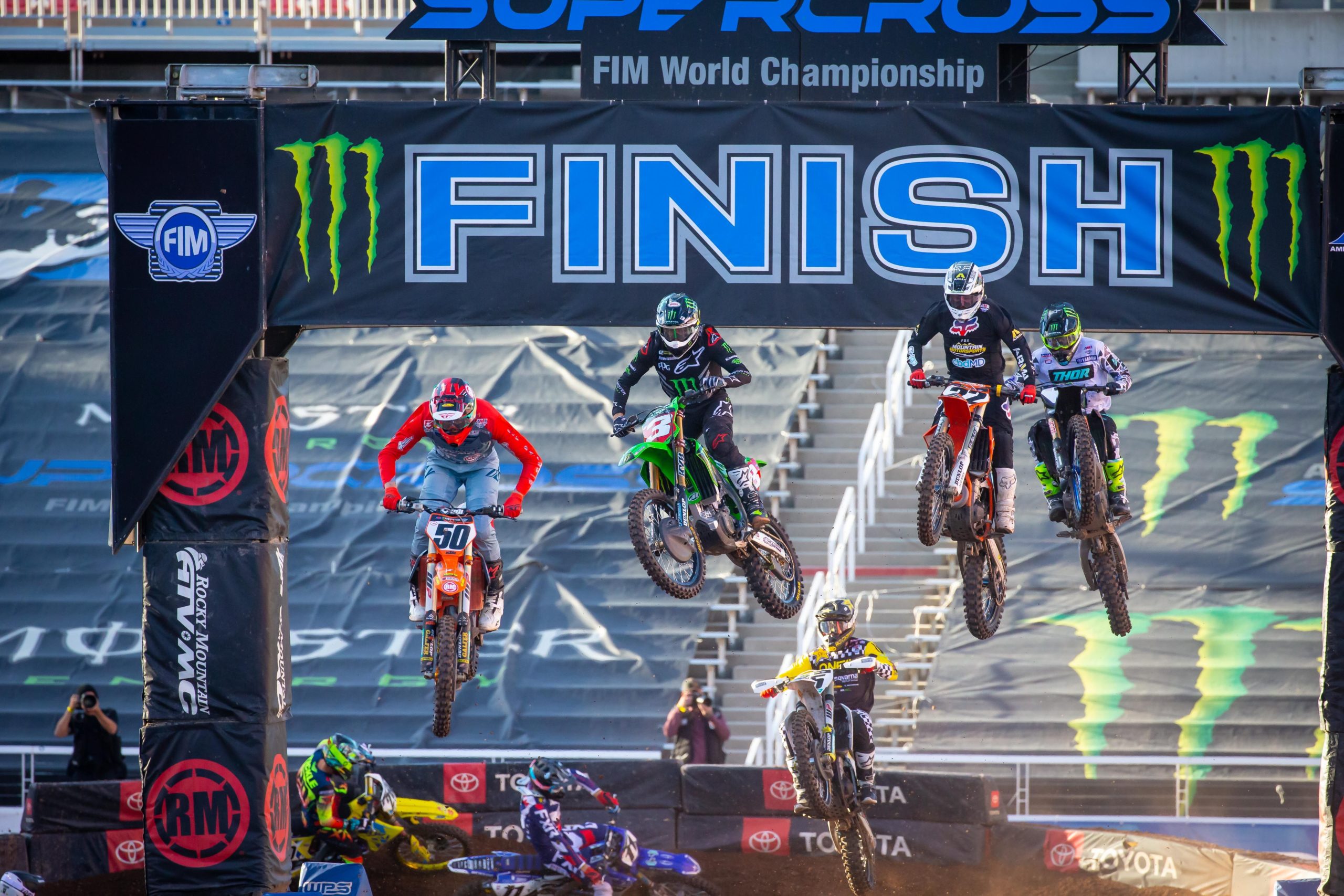 Eli Tomac started the main event buried at the back of the pack and had to fight through. Photo Credit: Feld Entertainment, Inc.

The seats were empty due to COVID-19 regulations, but Rice-Eccles Stadium was filled with tension and nerves as the 450SX class racers roared off the starting gate. Entering the first turn, points leader Eli Tomac was dead last among the 22 racers. Zach Osborne emerged with the holeshot with Team Honda HRC’s Justin Brayton in second, Smartop/BullFrog Spas/Motoconcepts Honda’s Justin Hill in third, and 2019-defending champion Cooper Webb in fourth. Round 15 race winner Team Honda HRC’s Ken Roczen was in seventh. With less than a single race’s points separating Tomac from both Roczen and Webb, it looked like a perfect opportunity for Webb and Roczen to gain points. For Tomac, a field of riders separated him from a race victory that would wrap up the title.

About three minutes into the racing, Webb had reached second place with Roczen keeping pace and passes along with him. But they were not clear of Tomac, who charged smartly through the pack, picking his passing sections and not pressing his luck. In past seasons the daunting task might have led to hasty decisions, but Tomac was rock solid. When he made the pass into fifth Tomac was only 5.7 seconds out of the lead. After a short-lived battle with Rockstar Energy Husqvarna Factory Racing’s Jason Anderson, he took over fourth place.

Up front at the midpoint of the race, Webb felt the approach of Tomac and had yet to shake Roczen. Tomac got around the Honda rider with just under eight minutes left on the race clock. Roczen battled back but kept the racing clean. With under four minutes and one lap remaining, Webb ducked under Osborne in a bowl turn. Osborne knifed his front tire and nearly went down, allowing Tomac an easy pass into second. 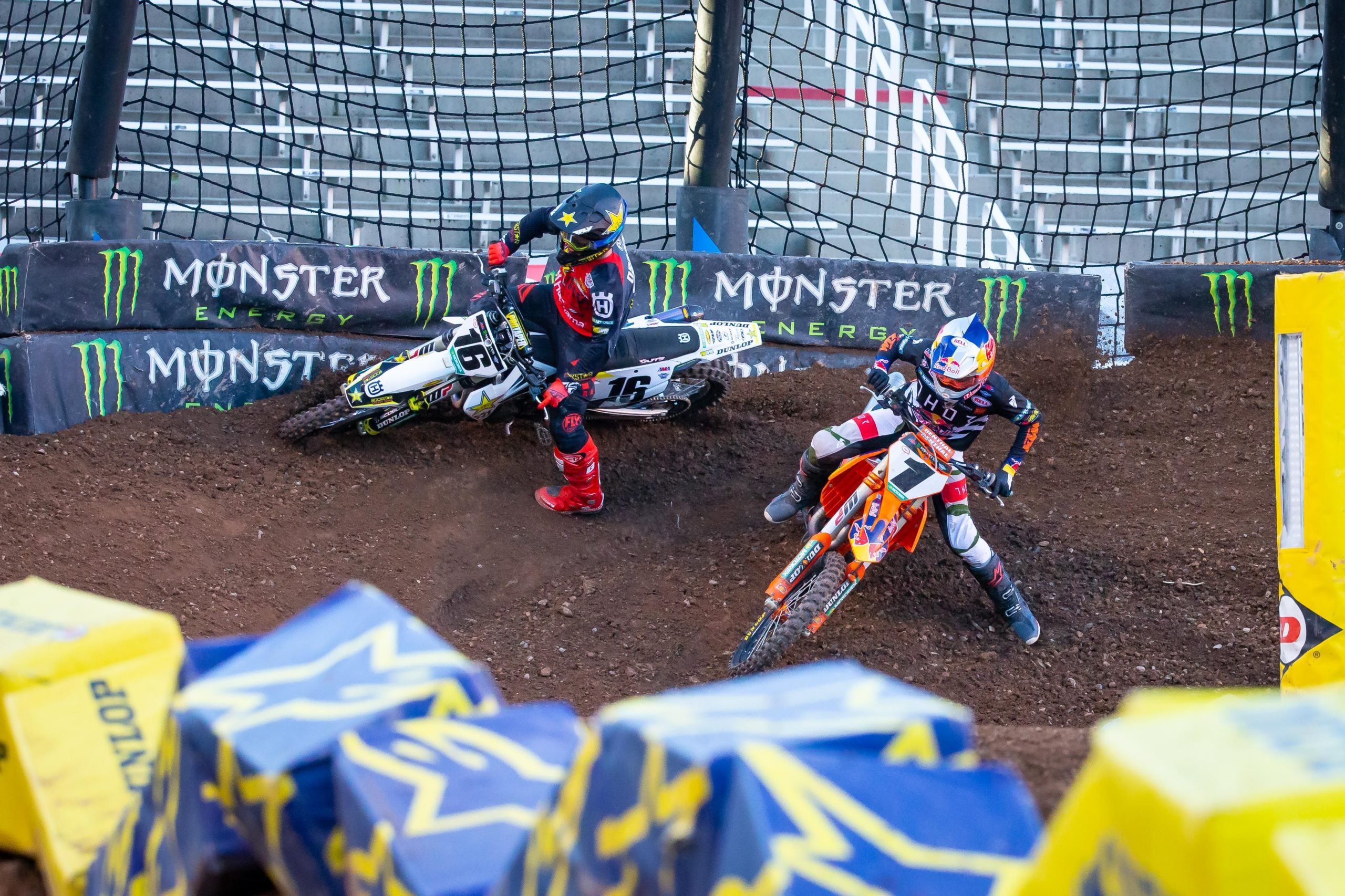 Webb and Tomac set off into a sea of lappers to see if Webb would force the title to be determined at the final round. The KTM rider maintained a one second lead for most of the remaining laps, putting in a flawless defense until he grabbed the checkered flag and his fourth victory of the season. Incidentally, Webb earned the win at every Wednesday race in the season’s accelerated-calendar second half; the win puts him 22 points behind Tomac with a single round remaining in the season.

When asked about the pressure from Tomac, Webb said after the race, “I wasn’t thinking about that too much I was just hitting my marks and trying to see where I could be a little bit better. The track was – we were all really close in speed, not a lot of separation. I fixed the whoops about halfway, I think that’s where it was holding me back, and started hitting them really well. I had a lot of pressure from Kenny [Roczen] , he was all over me there at the beginning. And Zach rode great out front. I definitely saw Eli get behind me and he was riding really good; I knew I had to go ahead and make a pass [on Osborne]. So, it’s a great night, it’s great to get another win. It’s incredible when we can win these things, and man that was a tight race between us four the whole time. It seemed like a lot of pressure between us all and it was like we weren’t making many mistakes. I’m sure it was a fun race for the fans to watch and it was a fun race to win for sure.”

Tomac was disappointed even after his amazing charge through the pack, “I felt better on this track today just for making passes. I was pushing hard, as hard as I could. Caught the front pack, then once Cooper made the pass on Zach it seemed like he stepped it up. So, I did everything I could, couldn’t quite get there, but really good day for us.” 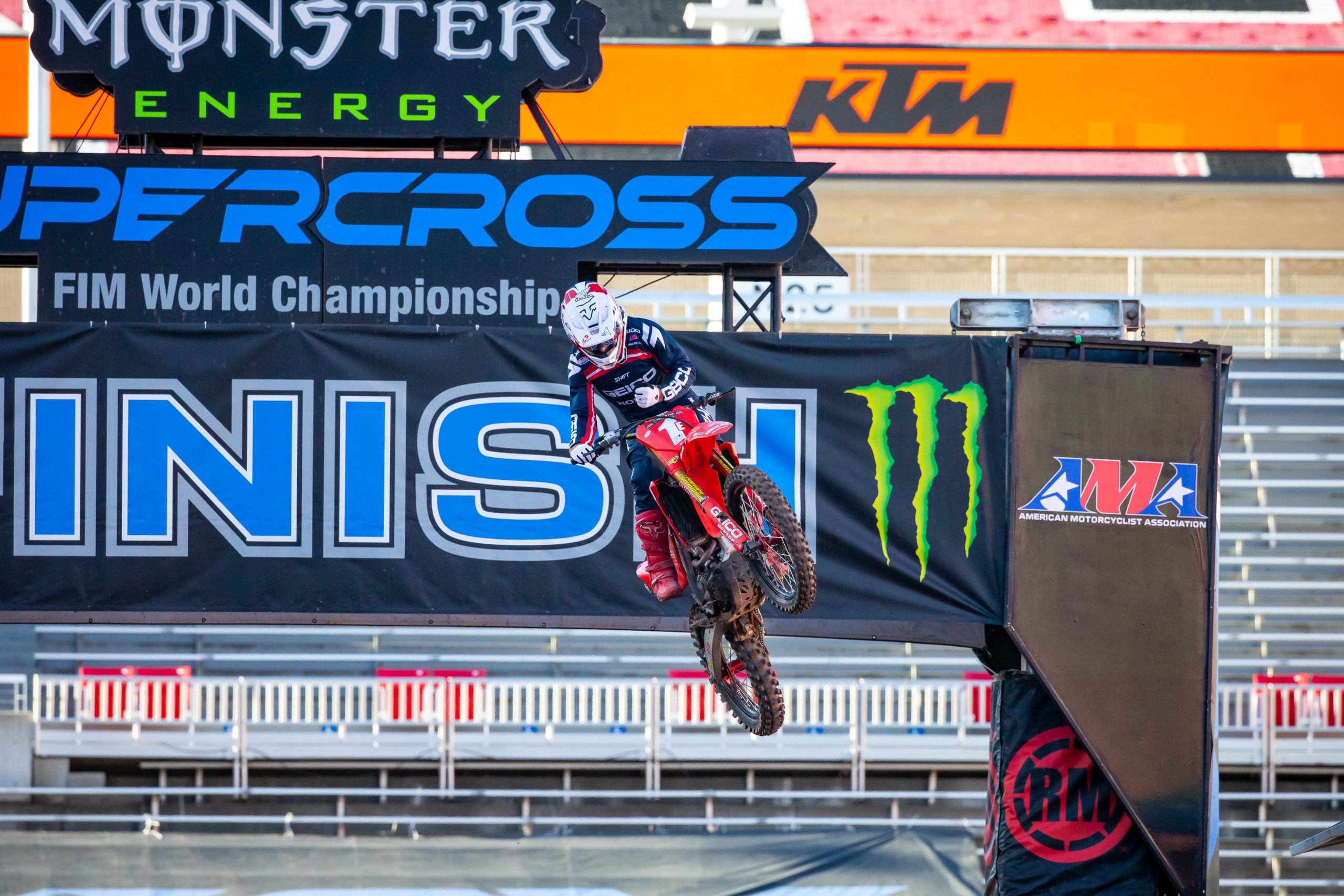 Chase Sexton did everything right to grab his second consecutive win and push his points lead to six. Photo Credit: Feld Entertainment, Inc.

The Eastern Regional 250SX Class offered its own dramatic racing. Going into the race, Chase Sexton held a three-point lead over Monster Energy/Star Yamaha Racing’s Shane McElrath. This would be their final match-up before the East/West Showdown where points can be gained or lost easier than in a standard season race. Monster Energy’s Darian Sanayei nabbed the holeshot, with McElrath in second and Sexton back at fifth; within a half lap the two title contenders had reached the first two positions and the race for a points advantage was on. Just over three minutes into the fifteen-minute plus one lap race Sexton pushed McElrath aggressively high in a bowl turn to take over the lead; McElrath chased but never closed enough to attempt to take it back. As they crossed the line, Sexton extended his points lead to six. In the other division, the Western Regional 250SX Class, the title contenders sit only seven points apart.

Sexton said about his decision to pass McElrath early, “I didn’t want a do-over of the first race here. I kinda followed him and once you follow you kinda lose your pace. I didn’t want that to happen because I felt like I had a really good flow tonight so yeah, I made it early. I knew I was fast in that rhythm section. I didn’t want to be too dirty, but I didn’t want him to be able to have a chance to get back at me in the next corner, so I had to put him to a stop. Overall, I felt really good out there; it was a super fun race. The lappers were the hardest part, I think, of the race, was just trying to figure out a way around them, then I ended up running into the back of Jalek [Swoll] when he fell. Luckily, I didn’t bend anything up. Man, that was a fun race, the track was super good.”

The season finale of the 2020 Monster Energy Supercross series will take place this Sunday, June 21 at 3 p.m. ET. Two races will determine all three 2020 titles. If Round 16 is any indication, the riders are hungry and ready to battle, and it promises to be a dramatic clash in a season that has already made history by delivering the full 17-rounds to fans. The race will be carried live, but split, with the first hour airing on NBCSN and the second two hours, which will contain both class’ Main Events, broadcast live on NBC. The event in its un-interrupted entirety will also be presented live on the NBC Sports Gold app. 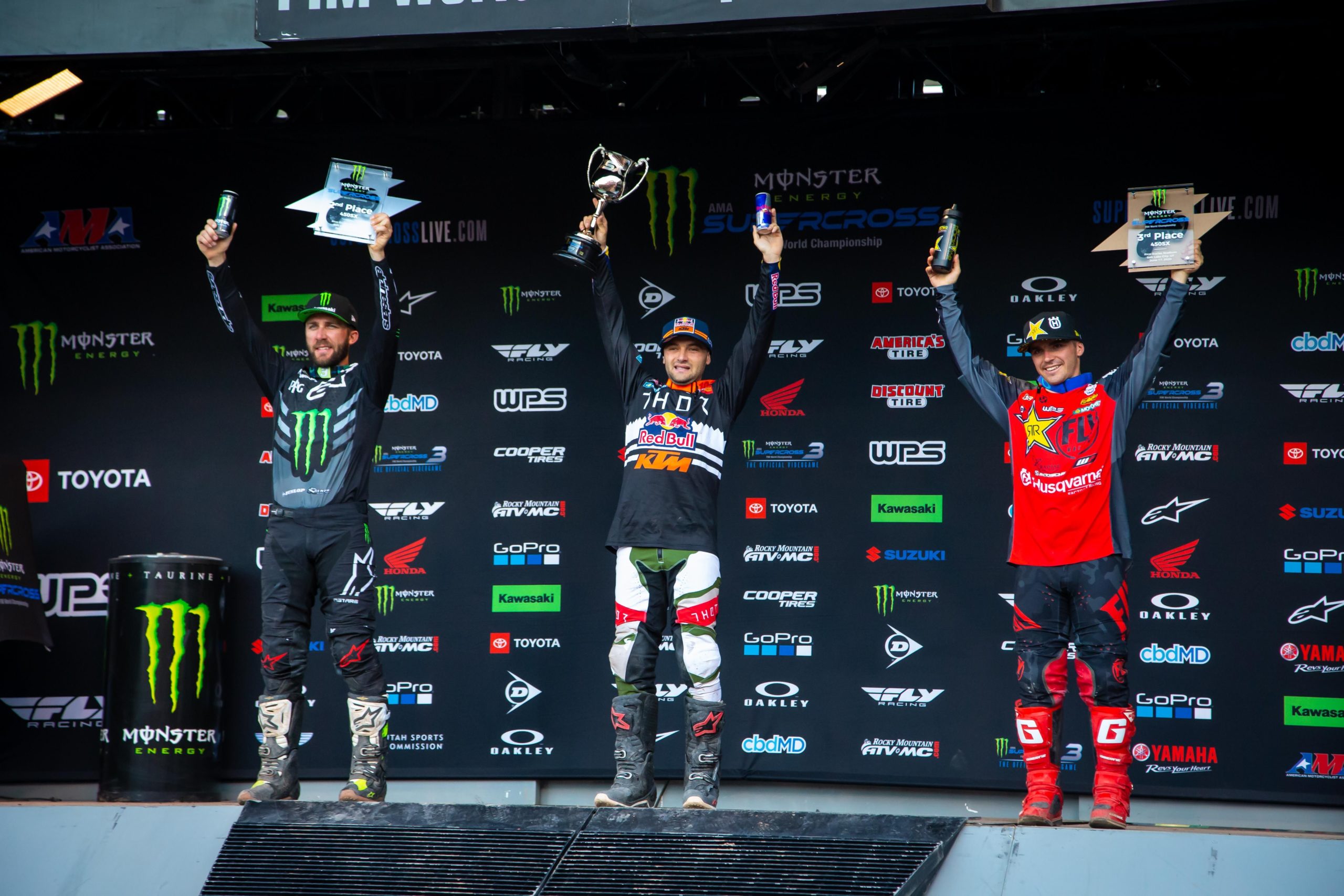 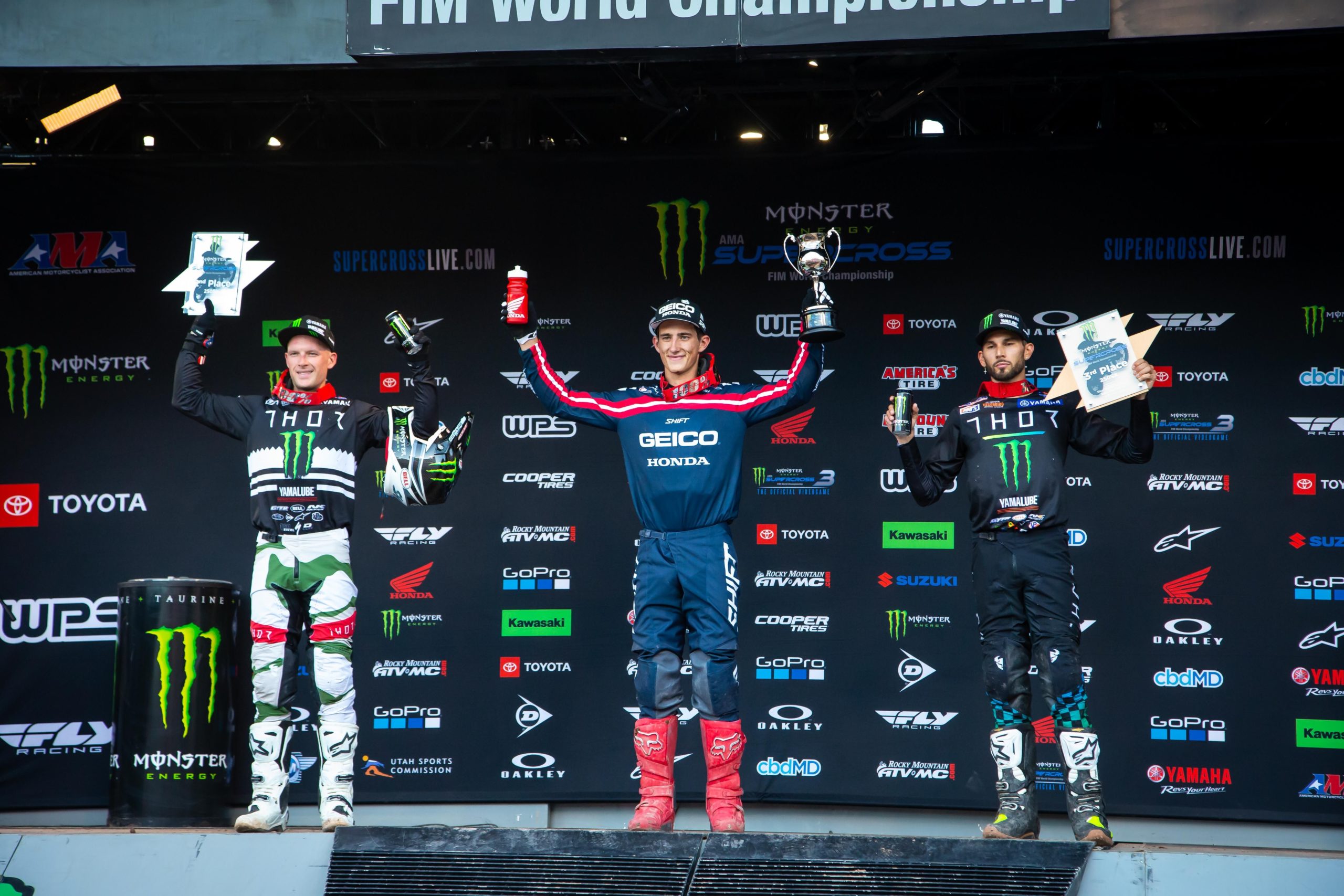 MUSQUIN ROUNDS OUT REDBUD MX DOUBLEHEADER WEEKEND WITH A CONSISTENCY

Tickle, Barcia Finish Inside the Top 10 at RedBud II