Brilliant news today with the most recent calendar for the 2020 FIM Motocross World Championships. A championship that started in England and Holland and was then cut down by this novel coronavirus soon after round two at Valkenswaard.

Now, six months later, we can start booking flights, hotels and organizing the second part of our 2020. While March, April, May, June, and July has been spent at home waiting, the new MXGP calendar has given many of us hope that this year’s MXGP and MX2 championships will go ahead and champions will be crowned.

As always, we gave Giuseppe Luongo a call and asked him a bunch of questions about the new calendar and why changes were needed.

Firstly, congratulations on getting a calendar done in these times and keeping our sport going. I can’t even imagine how difficult this has been. Do you expect this to be the final calendar, or are you concerned more changes will be forced by government decisions?

It was extremely difficult, to say the least. We think this calendar should be the final one, where we see still some uncertainty is with Turkey and Matterley Basin, but the desire of everyone is to go on with the events. 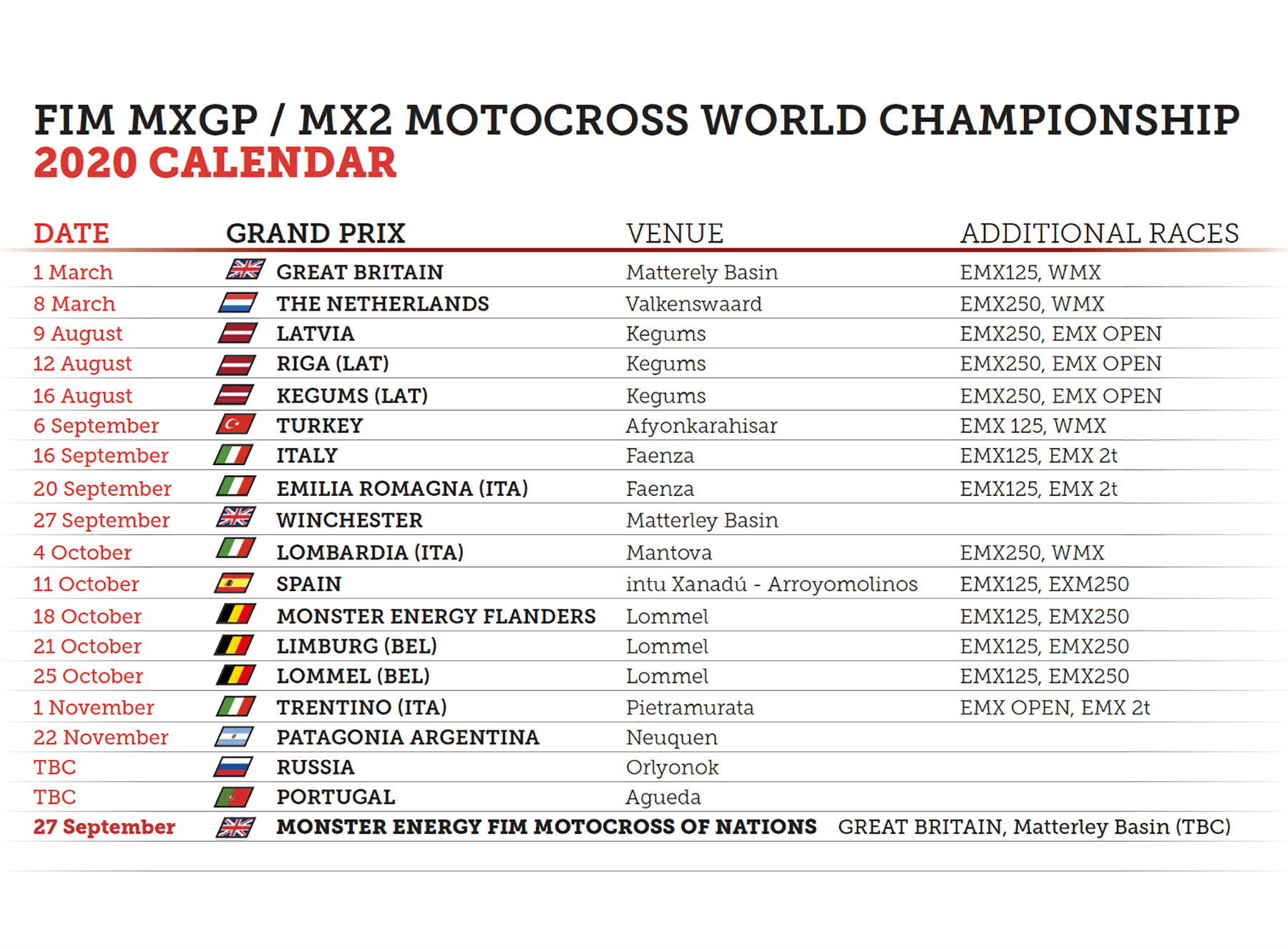 The negotiations with everyone has been right up until last night because the will of every organizer was to make their Grand Prix event. The decision to cancel some races was made based on the restrictions by the central governments and also by the local authorities. Mutually between us and the organizers, of course, they will be back on the calendar next year. From all the organizers there has been excellent cooperation and strong will to go on, some of them have been forced to step back by the restrictions of their country. And I would like to take this moment to thank all of them for their loyalty and all the hard work made to try to save the events.

Obviously due to government decisions being made daily and a lot can change from now until even tomorrow, but do you know as of this moment if any of the races can have spectators?

In principle at every race, there will be spectators. For the moment, there is a limit on the number of spectators allowed. For example in Latvia, 1,000 per day is permitted with a high chance to increase this number by the time of the races, and we are hoping that by September the restrictions will be taken away or will be much more supple for the rest of the events.

Starting in Latvia will make everyone happy as it is a great GP and also a great country to visit. Having the motocross family all together again under such beautiful conditions is something I think we all look forward to. What made you want to do the three in Latvia?

There are several reasons. The great cooperation with the organizer, with the National Federation and with the government, and especially because the government considers our sport as a major sport and has given MXGP their full attention and support, which is not the case in some other countries. Also, because we know the quality of the organization and the quality of the circuit where we can manage to have 3 events in one week with 3 different layouts.

Faenza and Mantova are a surprise. What was the reason for having these two circuits involved?

With these 2 organizers whom we have made Grand Prix events in the past, we have always kept a very good relationship and they have always been ready to jump in, so this was a great occasion for everyone. 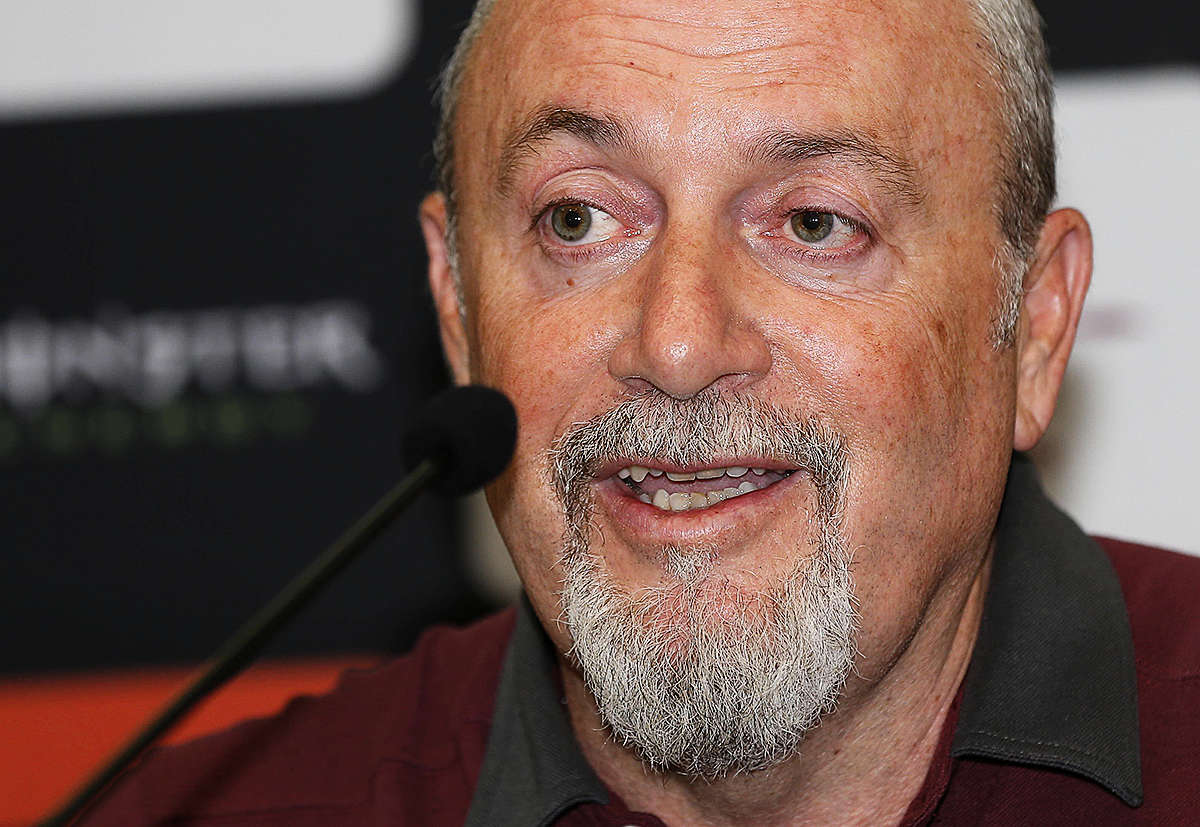 Giuseppe has to deal with a myriad of governments to try to get this schedule slated in.

Monster Energy Motocross of Nations at Matterley Basin, obviously Steve Dixon has been a great supporter of the sport and no doubt he will push hard to make it as special as possible. Will there be any changes to the schedule for this event and will GP points still count and if so, how will you do that? Has Ernee now been pushed to 2021?

Yes, Steve is one of the greatest lovers and supporters of our sport and he will surely do his 200% to succeed with the organization of the MXoN. And I believe after the starvation of our sport for our fans there will be a huge crowd for this unique MXoN. Yes, for this event the participants will take points also for the MXGP and MX2 World Championships. Infront Moto Racing and FIM are studying the Regulations and they will be announced shortly, however, what is sure is that the soul, the spirit and the format of the MXoN will be kept. Ernee is postponed to 2023, because for 2021 we have an engagement with Italy and with USA in 2022.

Indonesia has been taken from the calendar and under the circumstances in that country I think we all understand why. Will they be back in 2021, along with China?

Yes, both Indonesian races and China will be back on the calendar in 2021.

I was speaking to Johan Boonen yesterday for an interview I did with him about the triple GP. The whole story of his grandfather once running the 1981 MXdN and GPs back in the day, it’s a really nice story and one I didn’t know. How excited are you for the sport to return to Belgium and Lommel and having a festival of motocross in that historical motocross country?

Belgium and in particular Lommel, are the strongest roots of our sport and I really hope with these three events compressed into one week, we can create a particular atmosphere with 7 days of Motocross party where people who take part will remember for the rest of their lives, and after many years they will talk about the Lommel Motocross week 2020 saying, “I was there!”

I am guessing it will be announced when the calendar is announced, but how will the weekend schedule look as far as Saturday and Sunday and EMX and MXGP and MX2?

To allow the riders better recovery time, as events will be very compressed, the MX2 and MXGP will be run all in one day; in the morning free/timed practise followed by the 4 races starting from noon. The European Championship and/or the Women World Championship will be run on the day before. 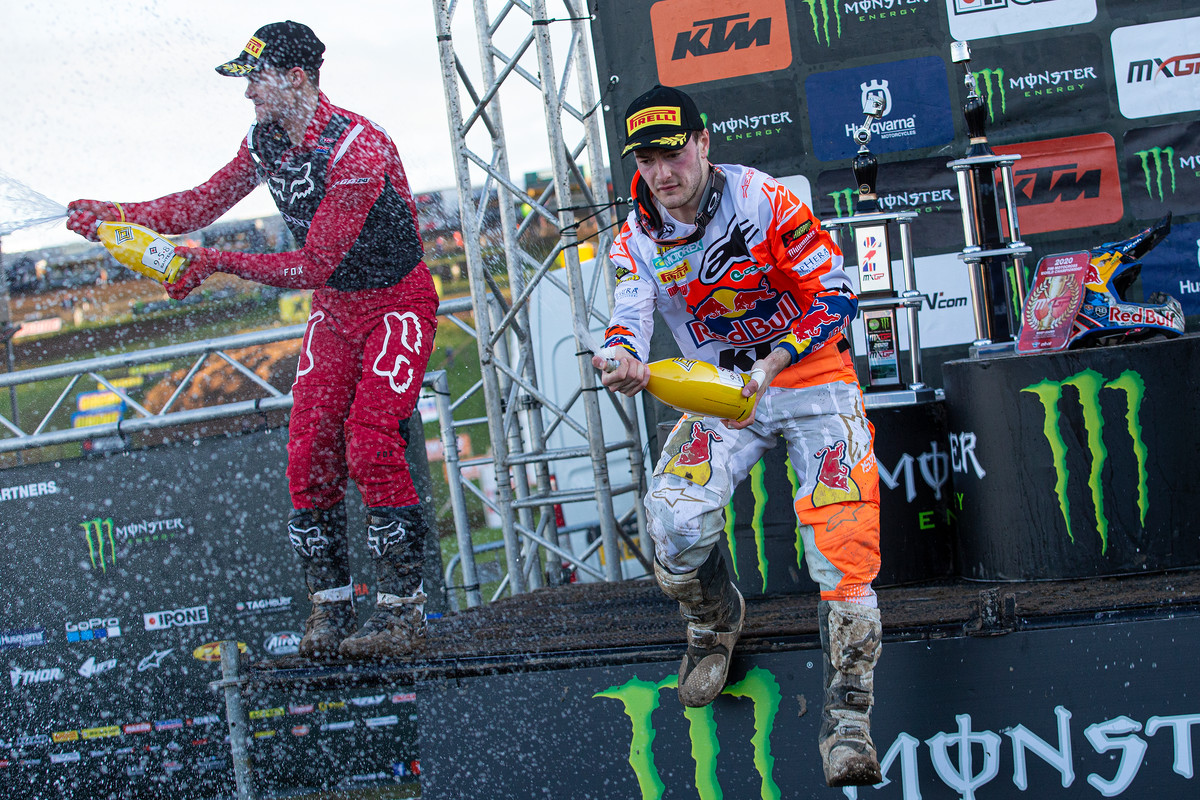 I know you have mentioned how it is important to have a calendar this year so that people in the sport can get back to work. I can imagine this year is nearly a throwaway year as far as business sense or making a profit, which is what all businesses want. Was there ever a moment you thought we just need to cancel the season or was the importance of getting people back to work always on your mind?

Even in the most difficult moment—believe me there we many of these moments in the last 4 months—it never crossed my mind to cancel the season. Between the Motocross World Championship and the European Championships, there are about 3,000 jobs. This means 3,000 families which live from our sport. Canceling the season would have meant for the large majority of these people to lose their jobs. This was never an option for me, for this, it’s very clear it’s our will and our duty to do everything possible to save this. Clearly the sport is very important for us, but there are moments where we have to think that there is something more important than the sport and working altogether in this way, we will arrive to save both.

Speaking to the promoters of Argentina soon after the GP was canceled, they said they would do anything to get the GP whenever it suits the sport. November is good month weather-wise in Argentina, so a great way to end the season.

It was never the intention to cancel Argentina, it was postponed in order to save it, and now the organizer is very happy and very proud to be the final event where everyone can have a great party to celebrate the end of the season and the end of a demanding year in their beautiful country.

I know Arnhem was keen to have a Grand Prix, and having visited the facility, it is a really nice circuit and area. How close did they come to getting a GP this year and will we see them on the calendar in 2021?

This is very possible, we are in negotiation and if things go well, we’ll be delighted to have them on the calendar 2021, but there are other very good organizers in Holland who are excellent candidates as well.

Last but not least, I would like to thank FIM and FIM Europe for the strong support and cooperation and especially I would like to thank David and Daniele for the great job they have done day and night during these complicated times. I don’t usually officially thank people of our staff, I normally do it privately, but the work they have done during this moment has been exceptional, and I would like to say some words for the manufacturers, teams and riders who have been all extremely cooperative, patient and understanding during these unstable months. We could feel the future of them all in our hands and believe me it is such a responsibility which we take very seriously.